Welcome to Longbox Junk, where I keep writing comic book reviews even though nobody asked me to!

Here at Longbox Junk, I like to step outside of my comfort zone from time to time, just to keep things interesting.  The comic at hand is a fine example of one of these times.  Generally-speaking, I've never been a fan of "funny" comic books.
Sure, I like a good issue of MAD Magazine or some Archie comics from time to time, but other than that, I've just never found "funny" comics that. . .well. . .funny.  The humor never really hits the mark for some reason.  Don't get me wrong.  There's some great comedy to be found in comic books (anything by Garth Ennis comes to mind), but for the most part, the laugh out loud moments are pretty few and far between (for me, anyway).
BUT. . .
Here at Longbox Junk, EVERY comic deserves a fair shot. So let's step outside of my comic book comfort zone and give Captain Carrot a fair shot, shall we?  WE SHALL!

AND HIS AMAZING ZOO CREW #1 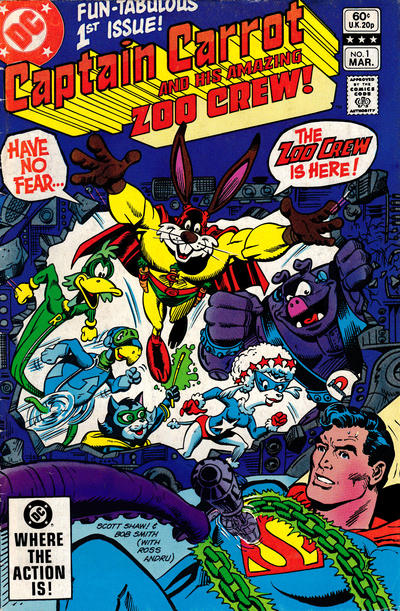 THE PLUTO SYNDROME!
SCRIPT: Roy Thomas
PENCILS: Scott Shaw & Ross Andru
INKS: Bob Smith
COVER: Scott Shaw & Ross Andru
THE COVER:
This cover is what caught my eye as I dug through the bargain bin a couple of weeks ago.  It's got SO much color, action, and just plain FUN that I had no choice but to bring it home!  I don't know what I'm in for when I open this thing up, but this great cover is definitely worth the price of admission!
THE STORY:
The story begins in progress (Continued from a 16 page insert in New Teen Titans #16 that I'll sorta summarize below) with Superman finding himself stranded on a strange world populated by humanlike animals.
Strange rays from the planet Pluto had been causing humans on Superman's earth to exhibit animalistic behavior.  During his investigation, he smashed through an invisible barrier in space that led to him discovering this odd version of earth where intelligent animals rule.
Superman quickly discovers that the same rays from Pluto are also affecting this other Earth, causing the animals to behave like. . .well. . .animals.  Enlisting the aid of a rabbit that gained super powers from a piece of a glowing meteor that followed Superman through the invisible barrier (One Roger Rabbit, now calling himself Captain Carrot), the two heroes try to find a way through the barrier in order to save both of their worlds. 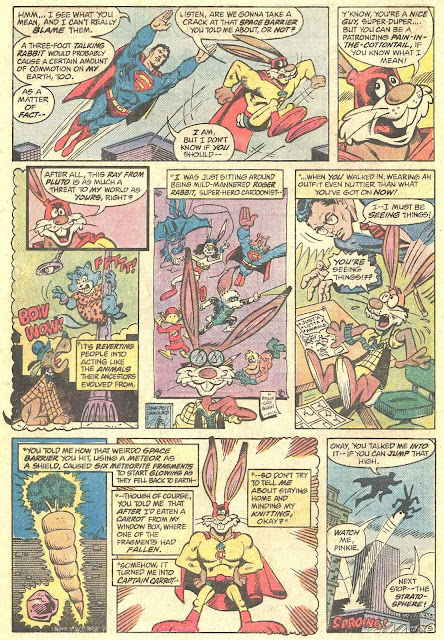 But when they arrive at the barrier, neither Superman or Captain Carrot are able to cross it.  Suddenly, Superman is drawn through the mysterious barrier against his will and vanishes, leaving Captain Carrot alone! 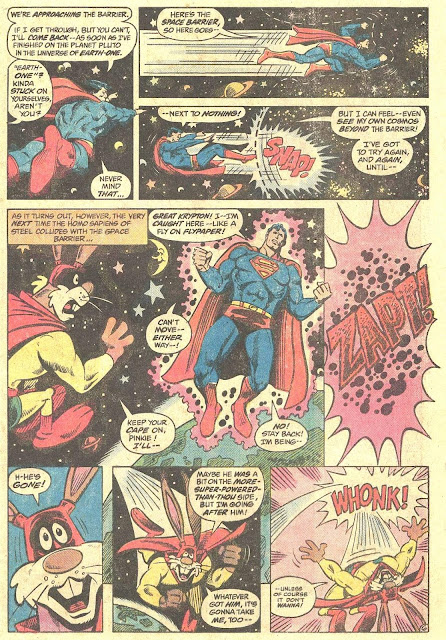 Captain Carrot returns to Earth, but quickly discovers that he's better at super-hopping than super-landing.  He's rescued from certain death by a strange metal pig. . .who introduces himself as "Pig - Iron" and tells Carrot his origin story.  It turns out he gained his powers from the same sort of glowing stone Captain Carrot got his from. 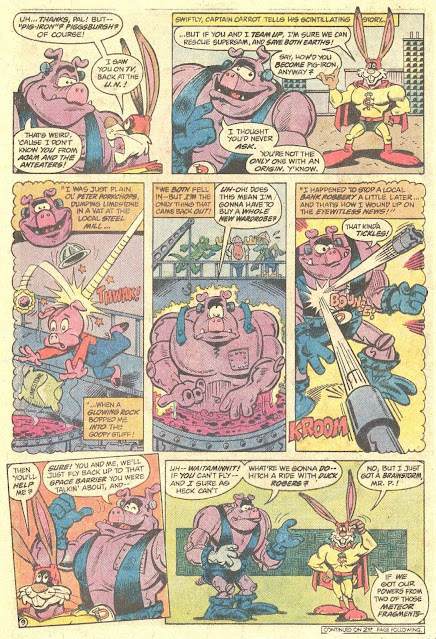 Captain Carrot realizes that if the glowing meteor fragments gave the two of them powers, then the same thing must have given the four OTHER superpowered heroes he's been seeing on the news their powers as well. . .and one of them might be able to get Captain Carrot to Pluto!
And so Pig-Iron and Captain Carrot set off on a journey to find and recruit other heroes to their team.  First stop, Mew Orleans!  There, they quickly find "Alley-Kat-Abra", a cat who gained magical powers from one of the meteor fragments.
After hearing her origin story, the growing team moves along to find other heroes, using Alley-Kat's magical teleport powers to travel to Kornsas. . . 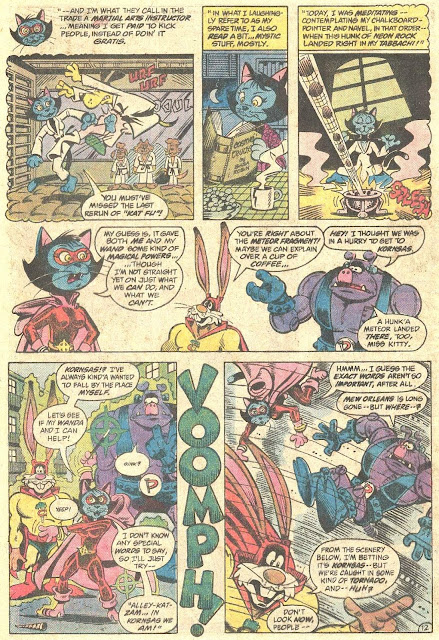 Once the team arrives in Kornsas, they quickly find "Fastback", a turtle who gained the power of amazing speed from one of the glowing meteor fragments.  After he gives us ANOTHER origin story, Fastback agrees to join the group of heroes as they make their way west to Follywood, where the final two meteor fragments landed. . . 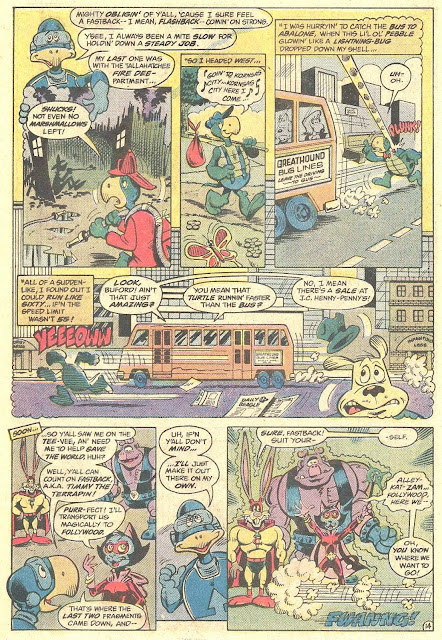 In Follywood, the new team joins up with a dog called "Yankee Poodle" (who fires stars that push from one hand and stripes that pull from her other) and a duck (who can stretch and form shapes with his body) called "Rubberduck", helping them with taking care of a riot caused by the mysterious rays from Pluto.
After two MORE origin stories, Captain Carrot has gathered a fine team of superheroes and they're ready to try to travel to Pluto and get to the bottom of what's happening! 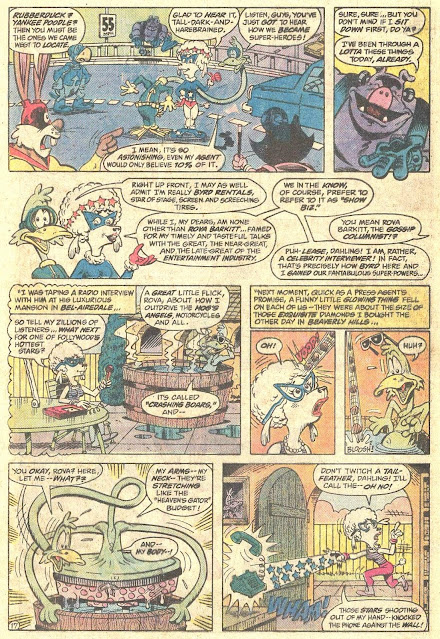 ]
Using Ally-Kat-Abra's magical powers, the team manages to penetrate the invisible barrier and find themselves on another world.  They've made it to Pluto! 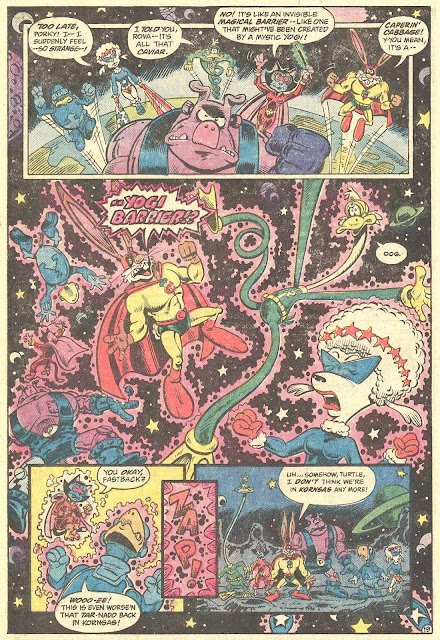 Upon finding and entering a hidden fortress, the team discovers Superman held captive by a bizarre creature calling itself "Starro".
And then it's time for ANOTHER origin story as Starro describes how after being defeated by the Justice League on Superman's Earth, a small piece of himself made its way to Captain Carrot's universe, where it regrew into Starro, a creature determined to become master of everthing. . .after it destroys Superman and his friends! 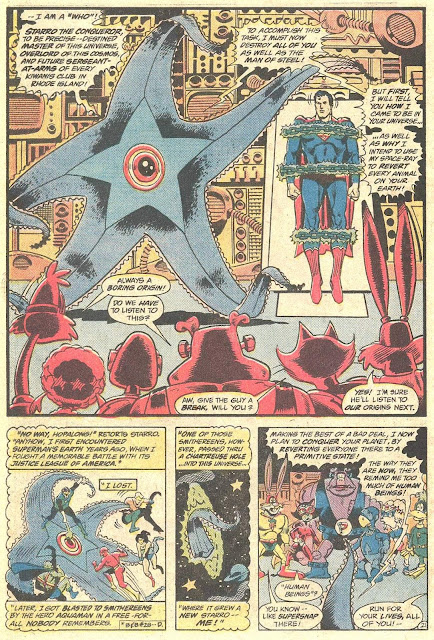 Despite Superman telling them to run for their lives, Captain Carrot and his team attack Starro!  Unfortunately, they don't do a great job of it and mostly just get in each other's way until Captain Carrot manages to get them to work TOGETHER to finally score the victory! 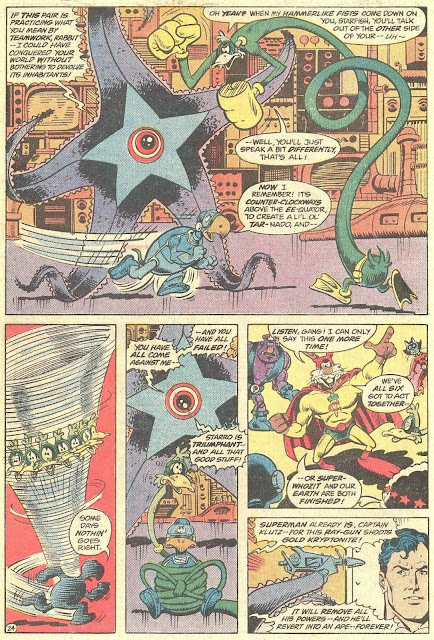 After defeating Starro and freeing Superman, the team decides to stick together and fight injustice on their Earth, while Superman returns to do the same on his own.  Taking on the name of "Captain Carrot and His Amazing Zoo Crew", a new superhero team is born! 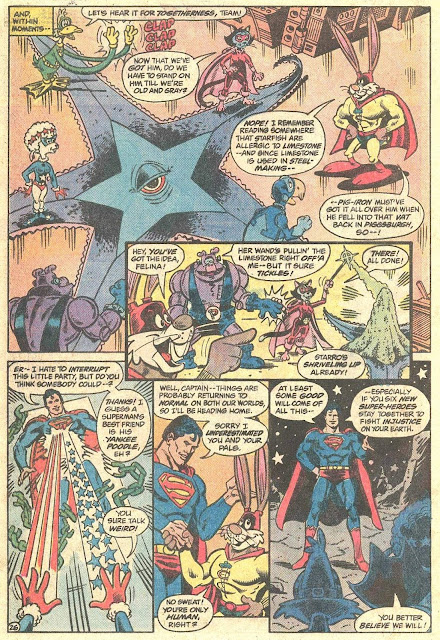 BUT. . .
Even as they celebrate their first victory as a team, a mysterious new threat emerges! 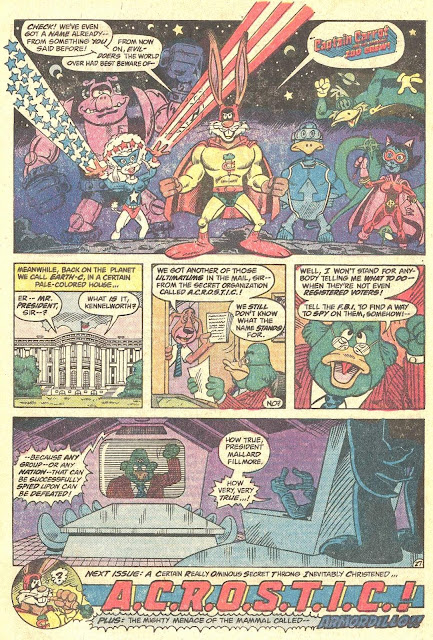 The End. . .To be continued.
THE REVIEW:
I'm gonna be honest here and tell you right up front that this hasn't changed my mind about "funny" comics.  That said. . .it ain't bad.  It might not be as funny as it wants to be, but it's definitely fun, so credit where it's due, because sometimes you just want a comic to be FUN.
Most of the humor here is derived from (pretty bad) puns and clever wordplay, as well as a couple of running jokes. Origin stories are the biggest running gag. . .there's SEVEN of them in this issue and the writers lean into that ridiculous number pretty hard, with the characters cracking jokes every time another origin story starts up.  The best part of the joke is that ALL of the origin stories are pretty much exactly the same.
Another running joke is Captain Carrot never getting Superman's name right.  It's not quite as funny as they try to make it, but it's amusing.  Speaking of the Man of Steel, they were smart bringing in Superman as the straight man in this first issue.  His befuddlement at the rest of the characters cracking wise through the story shows that DC isn't afraid to let one of their tentpole characters be the of the joke in order to promote this strange little comic and set it firmly in the DC "universe".
On the art side of things, I liked the look of this comic quite a bit.  It's colorful, it's exaggerated, it's FUN.  The art here isn't going to win any awards, but it's a style well-suited for the wacky story being told.  From what I read, Ross Andru drew Superman only. . .making him stick out like a realistic sore thumb and leaning into the Man of Steel being the straight man outsider in a world of comedy.  It's a great visual gag!

I'm not a fan of "funny" comics, but I liked this one. . .even though it was more fun than funny to me.  But like I said above, there's nothing wrong with a comic just being fun now and then.  It wasn't the greatest comic I've ever read, but it was better than I expected.  The jokes weren't as funny as they wanted to be, but they weren't bad either.
This series lasted a respectable 20 issues, and I've come across several of them in the bargain bins over the years. . .but if you don't want to go Longbox Junkin' for single issues, the whole series (along with a later mini-series and the original Teen Titans preview) has been collected in a big, chunky DC Showcase Presents volume.
Overall, I can certainly recommend Captain Carrot to parents for younger readers, as well as older readers who are just looking for something lighthearted and fun to read.  Unfortunately, if you're already iffy about "funny" comics (like myself), Captain Carrot is a decent read, but it isn't going to change your mind.
Up Next. . .
Let's get DEEP down in the bargain bin, shall we?
It's prolific artist Brian Stelfreeze's FIRST comic work. . .
It's a 1988 3-issue miniseries from a publisher better known for early comic industry magazines, "Comics Interview Group". It's CYCOPS!
Be there or be square.
- read more
1 2 3 4 5 6...32 Previous >>