Welcome to Longbox Junk, where I write comic book reviews that nobody asked me to!
When it comes to comic books, I'll admit that I'm much more of a fan of non-superhero characters.  Don't get me wrong, there's a lot to be said for a great Batman or Captain America story, but give me a Lone Ranger, Green Hornet, Spirit or Zorro story and I'm a very happy man!
Conan The Barbarian is right up there in the top ten list of my favorite non-superhero characters.  I think one of the things I like best about Conan is that he's a deceptively simple character that can be used in almost ANY kind of story!
Conan fits right into horror stories, comedy stories, epic adventures, small character pieces, mysteries, heck. . .at the time of this writing, Marvel even has Conan teaming up with superheroes in the mainstream Marvel Universe (in the ongoing "Savage Avengers" series) and they're STILL great Conan stories!
Marvel's impressive original 275 issue (plus 12 annuals) run on Conan The Barbarian is a pretty good testament to just how versatile the character is.  Even better for a Longbox Junker such as myself, a hefty run like that means (with the exception of the earlier, more "valuable" issues) you can find a LOT of great Conan comics in the bargain bins.  Maybe not as ubiquitous as other dollar box fillers, but there's plenty of them out there to be found.
Which brings us to the issue at hand!
Coming in at roughly the halfway point of Marvel's run on the series, we have a tale that leans toward the horror genre, wherein we find Conan the Barbarian during his days as a wandering mercenary encountering a savage beast with a tragic secret.  Let's take a look, shall we? 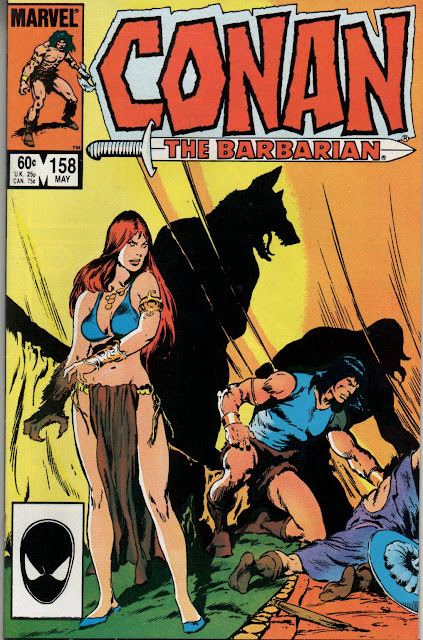 NIGHT OF THE WOLF
SCRIPT: Michael Fleisher & John Buscema
PENCILS: John Buscema
INKS: Rudy Nebres
COVER: John Buscema
THE COVER:
The late, great John Buscema was a Bronze Age heavyweight and he doesn't disappoint with this cover! The colors are rich and inviting, the composition is perfect.  I really like the contrast between the background and the shadows, which give us a hint of the story inside.
This cover tells a story in ONE single image and it immediately grabbed my attention when I spotted it in the bargain bin.  It's just an amazing cover all around and I'm glad I have this in my collection!  Let's get inside and see what's going on. . .
THE STORY:
We begin in the desert, witnessing a strange scene. Two horsemen pulling a box with a captive woman inside across the sand as she cries out for help. . . 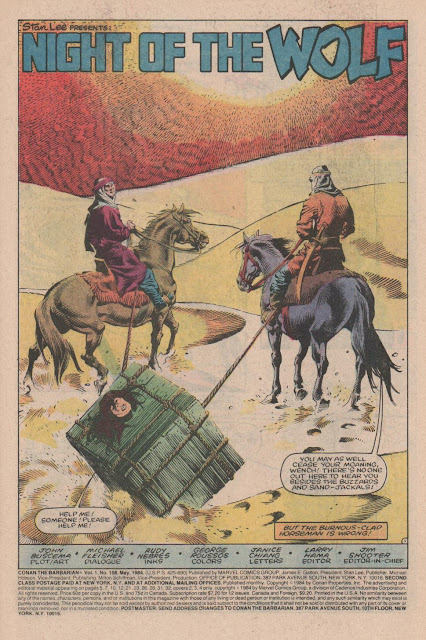 Luckily for her, Conan the Barbarian just happens to be passing by within earshot of her cries and decides to investigate.  As the woman begs for her life, Conan demands she be freed.  A fight breaks out and Conan easily dispatches her captors before letting the woman out of the box. 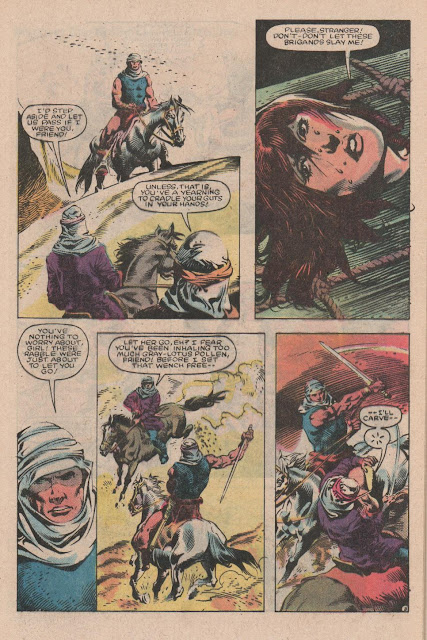 Not long after rescuing the woman, her father arrives on the scene.  He initially thinks Conan was one of her captors, but she tells him of Conan's brave rescue of her.
Her father informs Conan that a certain Sheik Abdul Zu Fadh has been obsessed with gaining the hand of his daughter for over a year and has become enraged at her rejection of him.  This is not the first time he's had her kidnapped.
They all return to her father's camp and prepare for a celebration in Conan's honor. 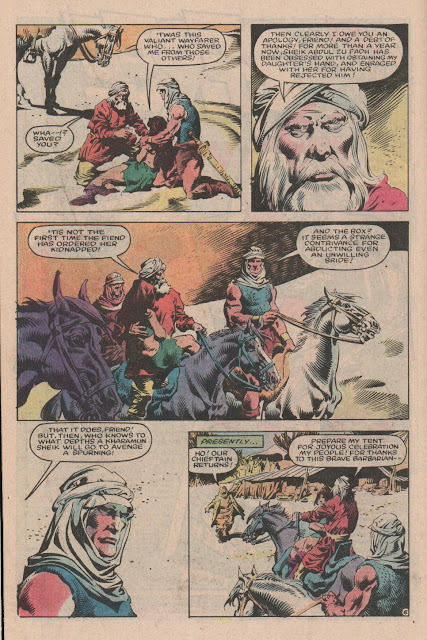 Later, at the celebration, we learn the girl's name is Kahlima and her grateful father is Ali Maksoud.  After dancing for her barbarian savior, Kahlima departs for the evening. . . 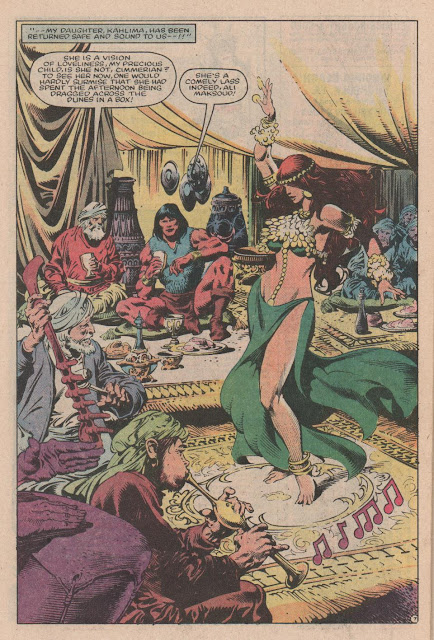 Not long thereafter, eerie howls rend the night air.  Conan is unconcerned, but Ali Maksoud seems to be mysteriously more worried than he should be.  After he departs to check on the noise, the back of the tent is ripped open and a huge wolf-like creature attacks! 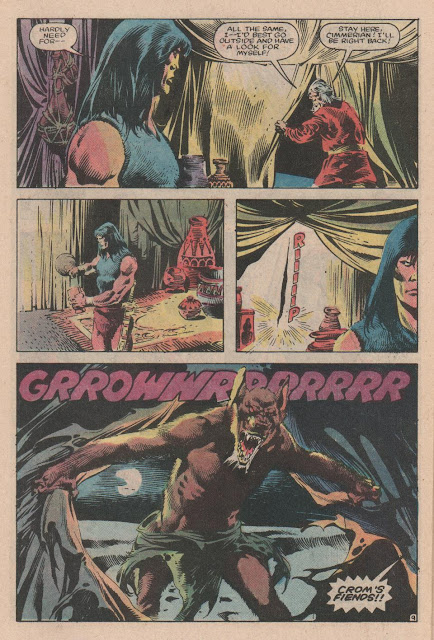 As Conan fights for his life against the supernaturally strong creature, Ali Maksoud and his men rush to his aid, barely managing to pull the monster off of him.  The creature flees into the night.  Conan is ready to give chase, but Maksoud convinces Conan to leave it be, as he fears an ambush that might cost him more men.  Conan reluctantly agrees. 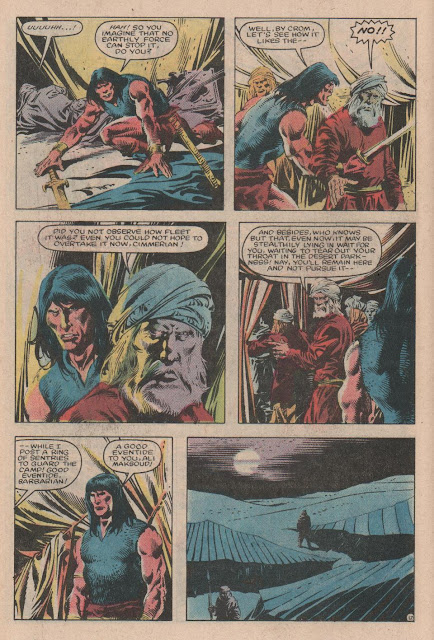 Come the dawn, Conan is roused by shouts of alarm.  Kahlima is missing again!  All signs point to another abduction by Sheik Abdul Zu Fahd.  Conan joins Ali Maksoud and his men as they set off to follow the trail of the kidnappers. . . 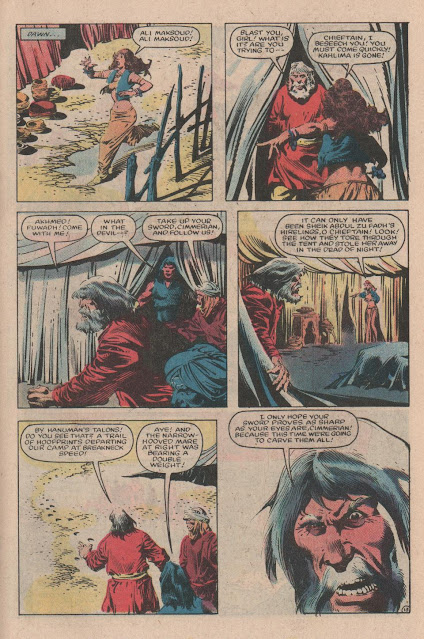 After a long chase through the day and into the evening hours, Conan and company finally discover the camp of the kidnappers, as well as Kahlima bound to the rocks.  Conan is wary of an ambush and his misgivings come true as a large band of armed men appear, led by none other than Sheik Abdul Zu Fahd!
Conan mocks the Sheik for having to kidnap women he wants to marry.  But Zu Fahd protests that he doesn't want to marry Kahlima, but that she's responsible for the death of his only son. . . 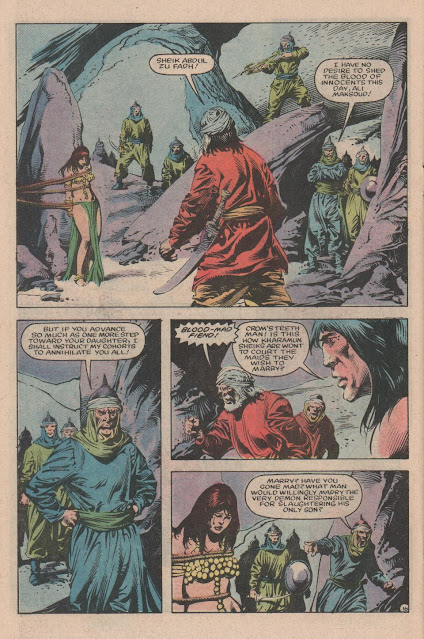 A battle between the two armed bands breaks out, but as they clash and the moon rises, Conan finally learns the truth of things as Kahlima begins to transform into the same horrific beast that attacked him the night before! 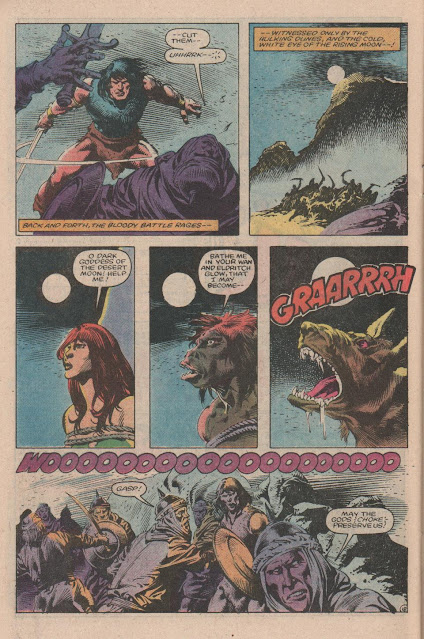 The enraged beast breaks free of its bonds and begins to attack both Zu Fahn and Ali Maksoud's men indiscriminately, sending the men into a fearful panic as Conan desperately tries to fight the creature. 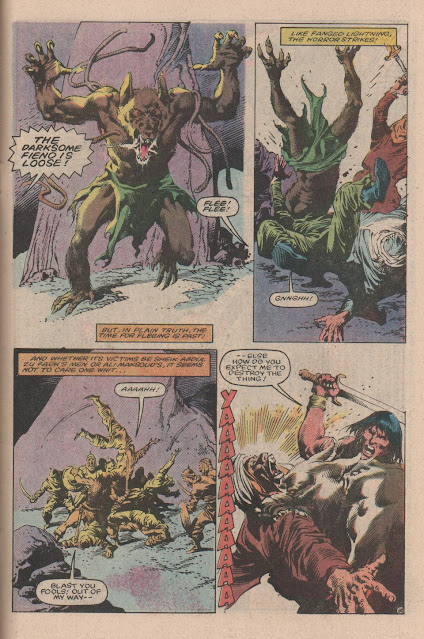 Sheik Zu Fahd cries out to his men to bring him an arrow tipped with a deadly black lotus poison, but Ali Maksoud prevents him from shooting it at his transformed daughter.  Instead, he uses the arrow on her himself. . . 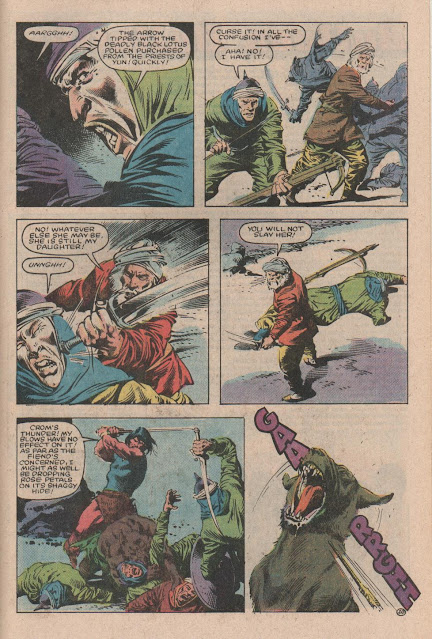 As the deadly poison takes effect and the creature changes back into human form, Ali Maksoud cradles his beloved daughter in his arms one last time as he tearfully explains that she was born from a night spent with a demon in disguise, and that he tried to conceal Kahlima's true nature because of his love of her.
Conan walks away from the tragic scene without a word and rides into the desert night, reflecting that this is an event that will live on in the tales of these desert people, but as for him. . .it's just another thing to put behind him on his journey through life. 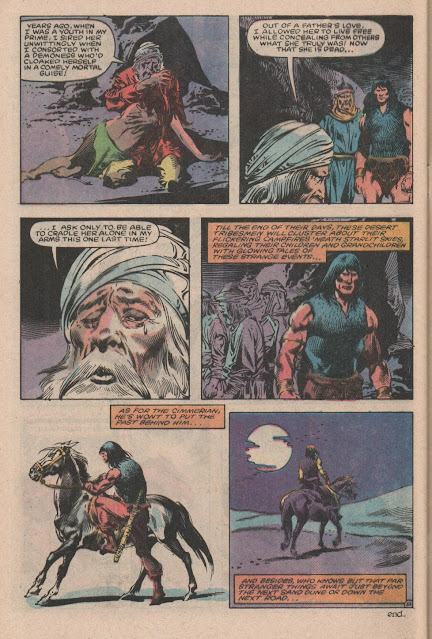 The End.
THE REVIEW:
All right, there it is. . .Conan the Barbarian and The Night of The Wolf.  Let's break it on down!
Prolific comic legend Roy Thomas wrote the lion's share of Marvel's Conan run, so it was interesting to see an issue written by someone else.  Thankfully, Michael Fleisher does a great job filling Thomas' shoes on this story!
It's simple, it's action-packed, and it's a good, solid adventure story that leans a little into horror.  Fleisher doesn't get fancy here, and because of that, this story has the timeless feel that is a hallmark of any good Conan story.  It doesn't matter that this was written 37 years ago, it reads like it was written yesterday. . .or in the 1930's, for that matter.  A good Conan story should have that timeless feel to it, and Fleisher captures it very nicely.
To be fair, there ARE a few places where the overblown dialogue has a faint whiff of Bronze Age Marvel bombast, but it's not really distracting from the simple story at hand.  All in all a very solid "one and done" story.
Now let's talk about the art. . .
The story is solid and well done, but it's the art that's the REAL star of the show here!  Like I observed in my look at the cover of this comic, the late John Buscema was a Bronze Age heavyweight and fully deserves a place of honor in the hall of comic book legends.  It's his work that REALLY makes this story shine!
The first handful of Conan issues are a bit pricey and considered more "valuable" to collectors because of the Barry Windsor-Smith art. . .and rightly so.  But in MY extremely humble opinion, Buscema's long run as artist on the title was superior.
When I think of Conan, it's Buscema's work that immediately comes to MY mind.  His detailed, kinetic artwork breathed life and energy into Conan's world in a way that's rarely been matched to this day.
Just LOOK at the pages I scanned above!  Every panel of this comic is a feast for the eyes!  This single issue alone is a master class in visual storytelling that a lot of modern artists could definitely take a lesson from.

A simple, action-packed story with that timeless feel needed for a good Conan tale, backed up by page after page of fantastic artwork from a comic book legend. . .what more could you want?
If you're a fan of Conan the Barbarian, you'll love this story!  If you're not a fan, this probably won't change your mind because it hits just about everything that a good Conan story should have in it.
I hate to make myself sound old, but they just don't make comics like this anymore.  From page one to page done, this is a great example of why Bronze Age comics still hold such a big place in the heart of many comic book fans. . .and I'm one of them.
Up Next. . .
I haven't decided yet, but I WOULD like to take this opportunity on the eve of Thanksgiving to thank each and every person reading this for spending a little bit of your precious time here with me.  I am indeed sincerely thankful that there are fellow comic fans out there who like to read these reviews that nobody asked me to write.  I wish you all a very happy Thanksgiving!
- read more

There's nothing wrong at all with a good ongoing series, but if anyone were to ask me what my favorite form of comic art is, I would immediately answer "The One Shot". Within the framework of a single issue, the creative team is challenged to give us everything we need to enjoy a story. They're pretty much forced to swing for the fences. Here are 5 random single issues from my collection read and reviewed for your consideration. Are they home runs or foul ? Let's find out!

Welcome to another round of random single issue Longbox Junk.  Let's get this party started!

A team-up between two great characters. . .Azrael and The Question.