Welcome to Longbox Junk, the place to find all the comic reviews you never asked for!

'Tis the season to be jolly!  That's right, folks, Christmas is just around the corner!
In the spirit of the season, I'm taking a short break from the Longbox Junk business at hand, being the epic reviews of 19 issues of King Conan (Which is taking me WAY too long. My apologies) and turning the Longbox Junk spotlight toward a Christmas comic!
And so, let's jump into the Longbox Junk time machine and head back to 1975 so we can take a look at a strange little holiday offering featuring the ever-lovin' blue-eyed Thing and the mysterious spirit of vengeance, Ghost Rider teaming up to fight a wannabe diety!
BUT FIRST!
I'd like to take just a moment to thank my Longbox Junk readers.
I truly appreciate everyone that takes a bit of their precious time to come here.  For the new readers, I'm glad you found me in my little corner of the internet and I'm happy to have you here hanging out with me.
I wish each and every one of you a Merry Christmas and a Happy New Year!
Enough of that. Ready? Let's do it! 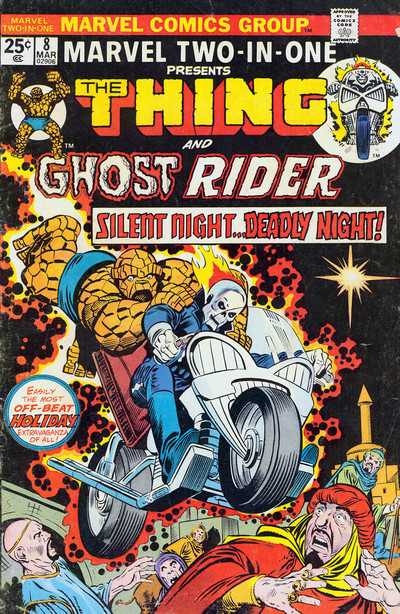 COVER: Gil Kane & Joe Sinnot
SILENT NIGHT. . .DEADLY NIGHT!
SCRIPT: Steve Gerber
PENCILS: Sal Buscema
INKS: Mike Esposito
THE COVER:
It's not the greatest cover in my collection by a long shot (sorry, Gil Kane superfans), but it IS really colorful and full of action.  Ghost Rider and his bike both look sort of "meh", but overall this cover does catch the eye with all the brilliant colors set against the black background.
Let's get inside and check out the story!
THE STORY:
We begin our tale in the Arizona desert, where Ghost Rider comes across three mysterious men on camels following a bright star.  Curious, Ghost Rider speeds ahead of them to see what is going on. 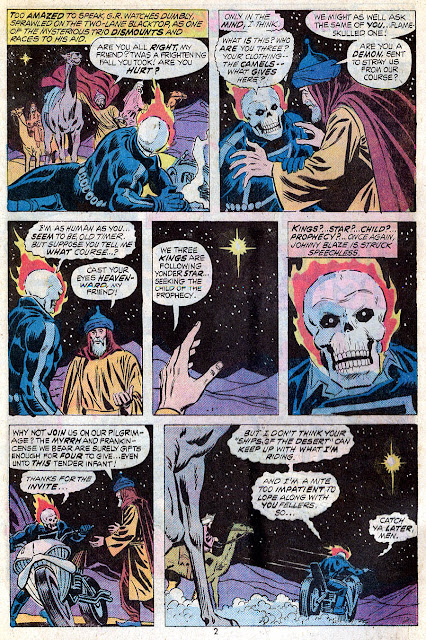 Leaving Ghost Rider behind for now, we switch scenes to New York City and the Baxter Building.  The Fantastic Four, along with some of their closest friends, are celebrating Christmas with a tree-lighting party.  Unfortunately, Reed Richards is wrapped up in his work observing a strange new star that has just appeared, that he's missing the party. 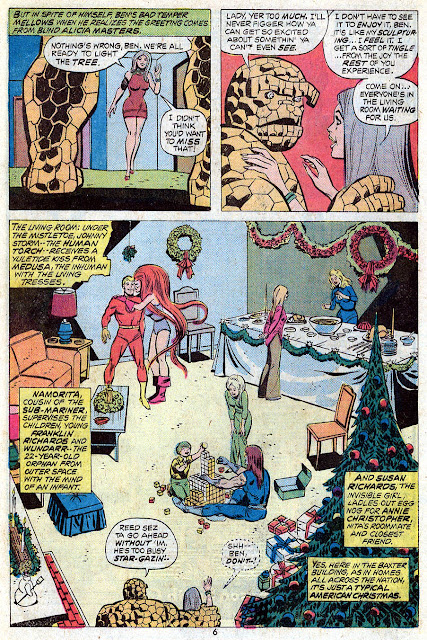 Returning to Ghost Rider, he discovers a strange Middle-Eastern town in the desert.  But the people, who are wandering in some sort of daze are American Indians.  Feeling strangely, Ghost Rider discovers a stable behind an Inn. . .sure enough, there is a woman, a man, and a child!
As Ghost Rider ponders the meaning of it all, a strange being calling himself "The Creator" demands that he leaves.  When Ghost Rider refuses, the being throws him out into the desert with little effort at all.  Ghost Rider becomes more determined than ever to get to the bottom of the mysterious events. 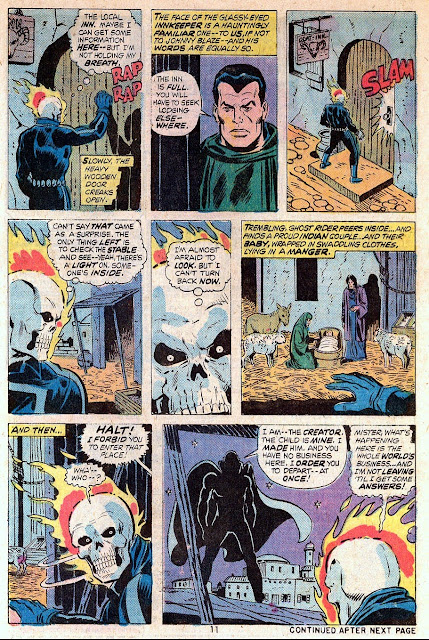 Returning to New York, Ben Grimm conveys his disappointment to Reed Richards for missing the Christmas Party.  But Reed ignores him.  He's discovered that the mysterious star he's been observing is now over the Arizona desert above an Indian Reservation.  He intends to take a Fantastic Four jet and investigate.
The Thing is having no part in it and demands that Reed go spend time with his family on Christmas while he goes to see what is happening.  Reed agrees and leaves to join the Christmas party. 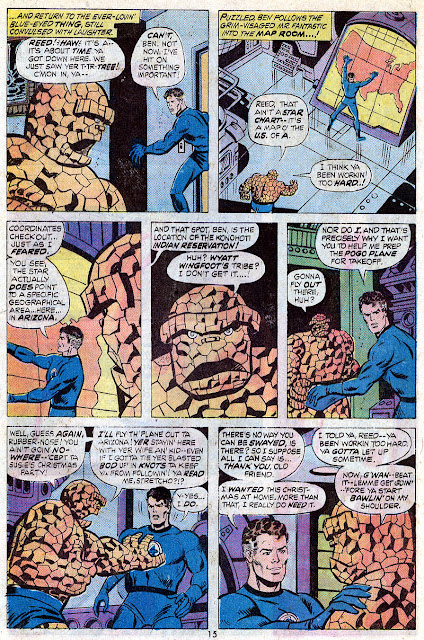 Arriving in Arizona, The Thing encounters Ghost Rider in the hills above the mysterious town.  The two know OF each other, but this is the first time they've met in person.  After a bit of discussion, they decide to work together to get to the bottom of the strange events. 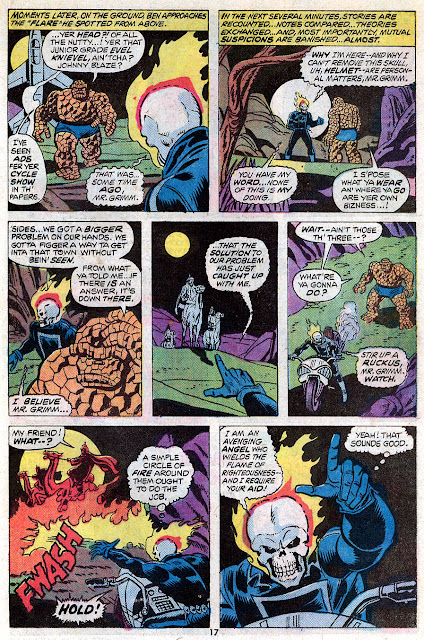 Disguising themselves, The Thing and Ghost Rider return to the manger, where they encounter the mysterious "Creator" again, but this time he is revealed as an old foe of the Fantastic Four. . .the Miracle Man! 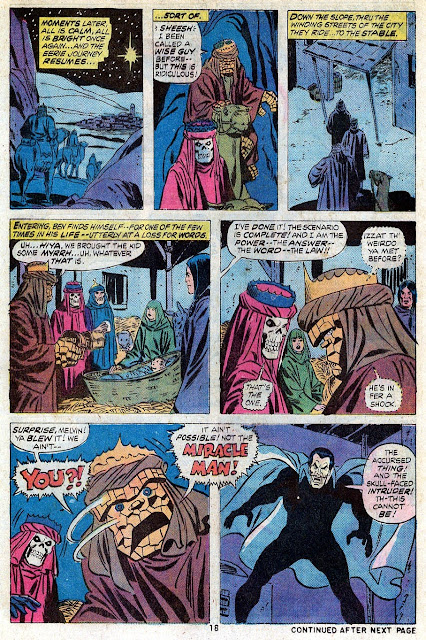 Now revealed and enraged, Miracle Man uses his powers to attack The Thing and Ghost Rider while gloating to The Thing about how he managed to escape the captivity of tribal spirits the Fantastic Four put him in and return to Earth, more powerful than before! 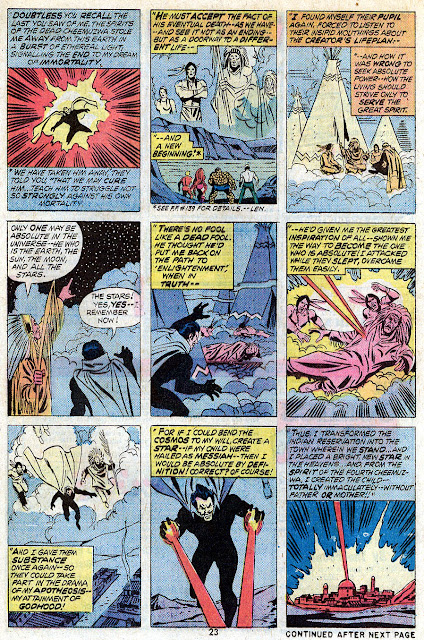 His new plan is to become immortal by recreating the events of the first Christmas, but with his own created child as Messiah, making HIM the Creator!  Ghost Rider and Thing aren't impressed with his convoluted exposition, and then. . .IT'S CLOBBERIN' TIME! 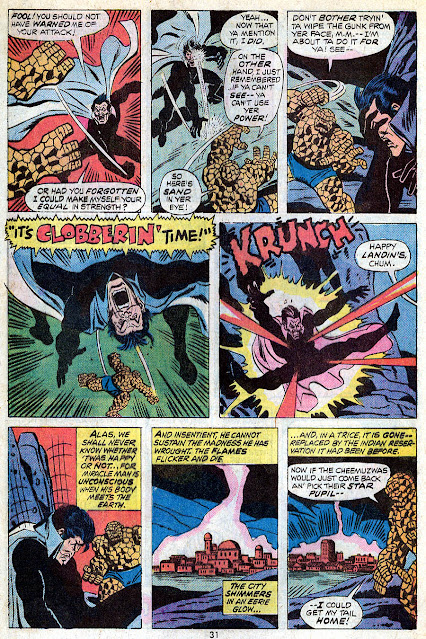 Ghost Rider and The Thing work together to bring Miracle Man down.  When The Thing knocks the villain out, his control over the area goes away and things return to how they actually are, breaking the mental control he had over the Native American tribe.
The tribal spirits that Miracle Man escaped from return him to captivity, but mysteriously the child that he created remained even after the rest of Miracle Man's illusions disappeared.  The tribe agrees to take the child in and raise him as their own.
Ghost Rider takes his leave, returning to his lonely ride and leaving The Thing to wonder about the strange new hero he's just met. 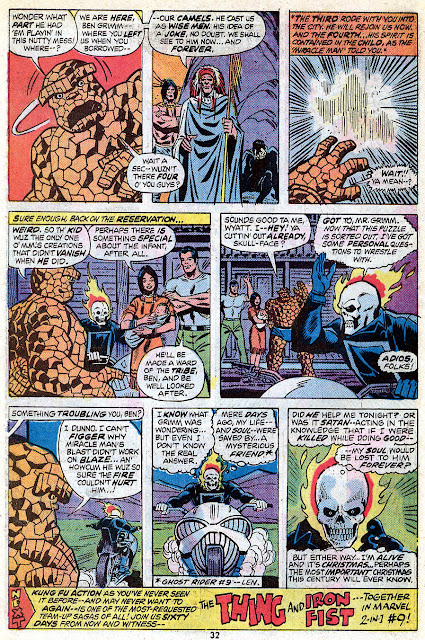 The End.
THE REVIEW:
Okay, there is is.  Marvel Two-In-One #8.  Let's break it on down!
It was. . .interesting.  The cover isn't lying when it says that this story is offbeat.  The villain's plan was pretty convoluted, to say the least.  I still don't understand it, but I have the feeling that the answer to any question I may have about it all would be, "Shut up and enjoy the comic, kid!"
This is one of those comics that don't really HAVE to make sense.  It's got The Thing and Ghost Rider together for the first time, right?  Does anything else really matter?  It's colorful.  It's action packed.  It's FUN!  Yeah. . .the story doesn't make much sense and it's not the sort of thing you're going to remember for long, but hey. . .Shut up and enjoy the comic, kid!
Not every comic has to be great.  Heck, this one is actually barely GOOD.  Sometimes you just want to read a comic book for FUN.  This comic is one of those comics.  It's not going to make any "Top Ten Greatest Whatever" lists.  It doesn't need to. Shut up and enjoy the comic, kid!
The art isn't anything special. . .I'm a huge fan of John Buscema, but in MY humble opinion Sal Buscema's work is. . .okay.  But does the art for this kind of comic NEED to be anything more than okay?  Not really.  It tells the story, that's it. That's all.  It's okay. Shut up and enjoy the comic, kid!

Honestly, this comic is a bit of a mess.  The story is basically an excuse for Ghost Rider and The Thing to team up and defeat a villain with a convoluted plan to become. . .G-od?  The art tells the story and doesn't try in the least to rise above the level of okay.  But you know what?  This comic was FUN!
If you're looking for a little bit of Bronze Age fun with some holiday flavor sprinkled on it, then here you go.  If you're looking for a deep, layered story or some mind-bending artwork, this ain't it.  This is a comic that knows what it's supposed to be and that's all it is.  Take it or leave it.
Once again, folks. . .MERRY CHRISTMAS AND A HAPPY NEW YEAR!
Up next. . .
Back to Longbox Junk business at hand. . .Part 3 of my King Conan series review.
Be there or be square!
- read more

Merry Christmas and a Happy New Year to one and all! 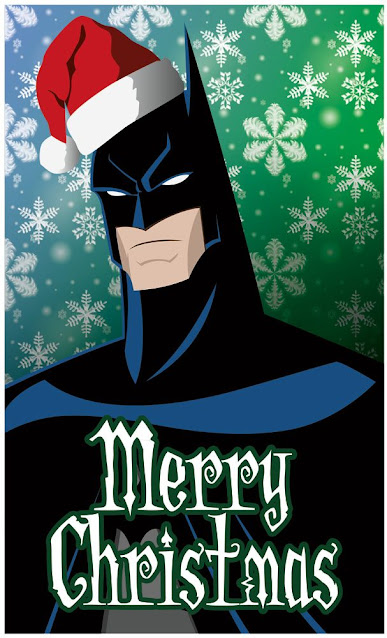 I'd like to take this opportunity to thank each and every person who spends a bit of their valuable time here reading my ramblings about comic books that nobody ever asked me to write.

I'll tell you true, folks. . .life in America is getting a little strange to say the least.  And trust me, it's gonna get worse.  There's some pretty important political stuff that's going to be happening in 2022, and it's sure to make the cracks between us grow even wider than they are now.  Worse, there's going to be NO way to escape it without going completely off the grid.

'Tis the season for comic review sites to be getting into some Christmas cheer! 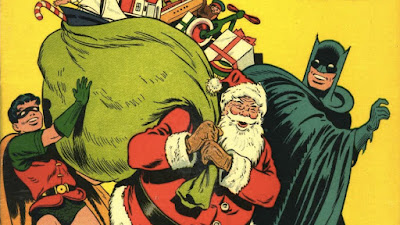 Unfortunately, last year I discovered I have a severe lack of Holiday-Themed comics for some strange and unknown reason I can't figure out.  And when I say a severe lack, what I mean is that out of THOUSANDS of comics between me and my daughter, we have a grand total of FOUR Christmas comics. . .of which I've already reviewed two.

Instead of doing reviews of Christmas comics I don't have, I'll take this opportunity to thank the readers of Longbox Junk.  I appreciate each and every one of you who choose to come into this merry mess of reviews that nobody ever asked for on a regular basis.  And for those of you who have somehow accidentally found your way into this little corner of the internet, thank you for coming as well!