October is almost done. . .Halloween is almost here!  But the Longbox Junk Halloween Horror Party isn't over just yet, folks!  It's been a pretty good party so far, but you know what will make it even better?  Frankenstein!
Okay, nerds. . .OKAY!  Frankenstein's MONSTER.  Better?
Marvel has had a long and successful relationship with Dracula in their comic books, but it's easy to forget that they ALSO held the rights to Frankenstein for a while (I know. . .I know).  I have a couple of issues, so how about we take a look at one?
I'm cranking up the Longbox Junk time machine again for a trip back to 1973 and another Longbox Junk Halloween Horror Retro Review. . .featuring the one and only Frankenstein's MONSTER!
AAARRR!! Fire BAD! Retro Review GOOD!  Let's do it! 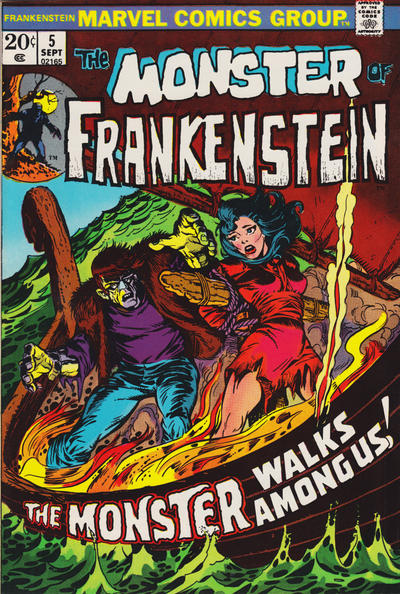 COVER: Mike Ploog
THE MONSTER WALKS AMONG US!
SCRIPT: Gary Friedrich
PENCILS: Mike Ploog
INKS: John Verpoorten
THE COVER:
Now THAT'S a Bronze Age beauty right there!  Maybe not the greatest HALLOWEEN cover, but a great cover anyway.  Mike Ploog packs in so much detail and energy into this image that it almost seems to move!  The colors are great, I love the big chunky logo and hype text.  There's nothing I don't like about this cover!  They do NOT make 'em like this anymore.  Let's get inside!
THE STORY:
As the Monster returns to civilization from the Arctic in search of the last living Frankenstein, he happens on a flaming boat and risks his life to save that of a woman tied to the mast. . .thus setting into motion a strange and tragic series of events, wherein lies the tale at hand. 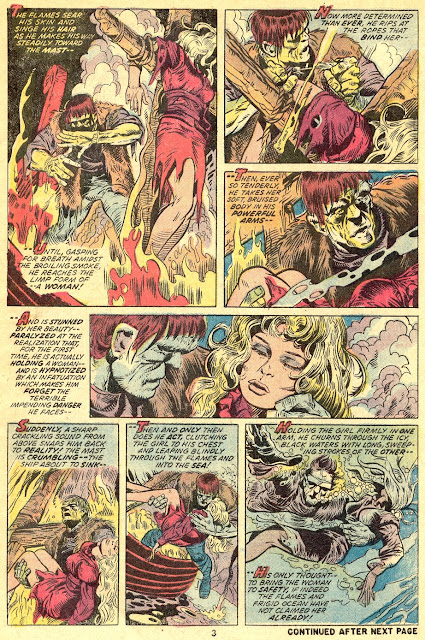 Taking the unconscious woman to a nearby village, the Monster is shocked to see the villagers celebrating her death.  The woman revives long enough to tell the Monster that the entire village has come under the demonic possession of a mysterious man in black, and that they must flee!
Against the womans wishes, the Monster carries her to her home, where he is attacked by the woman's father!  As the man shouts that his daughter must die, the Monster defeats him and leaves the village with the woman, now convinced that she was telling the truth about the villagers being possessed by demons. 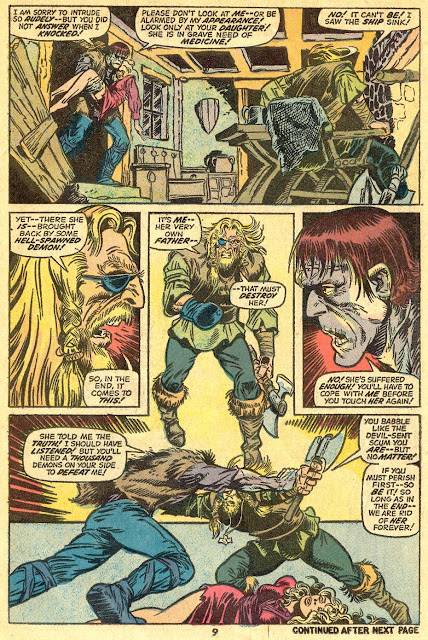 Wandering through the woods in search of sanctuary, the Monster finds a beautiful, secluded clearing hidden deep in the forest.  As the weeks pass, the woman, named Lenore, heals and grows stronger while the Monster finds himself falling in love with her.
When he finally tells Lenore about his feelings, he is elated to find them returned!  For the first time in his miserable existence, the Monster knows love and joy! 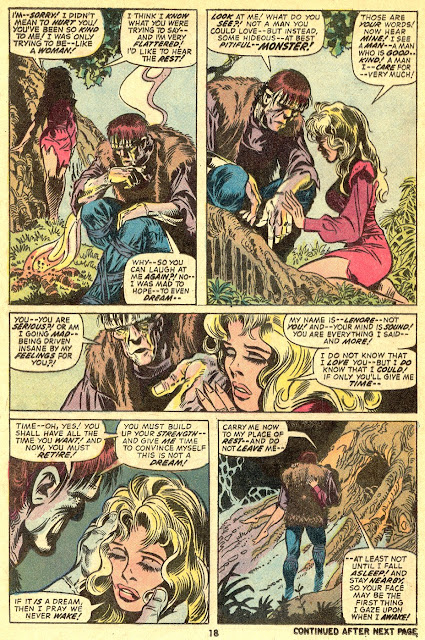 But one day, upon awakening, the Monster finds Lenore has vanished!  Following her tracks, he finds signs of a fight and pieces of her clothing.  Continuing on the trail, the Monster discovers it leads back to the village.
Convinced that Lenore has been captured by the possessed villagers, he waits until night and begins to search for her.  As he does, he witnesses a guard being brutally attacked by a wolf-like monster!  As he watches, he realizes that THIS is the creature that must have taken Lenore!  Filled with rage, the Monster attacks the wolf creature. 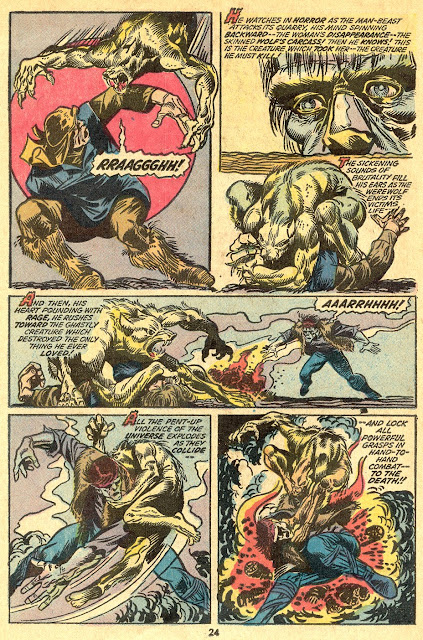 As the battle between the Monster and the wolf creature rages through the village, he manages to finally defeat it by using a silver sword belonging to Lenore's father, pulling it from the tree where it was lodged during their earlier battle.  But to the Monster's horror, the slain wolf creature transforms into the beautiful, beloved Lenore! 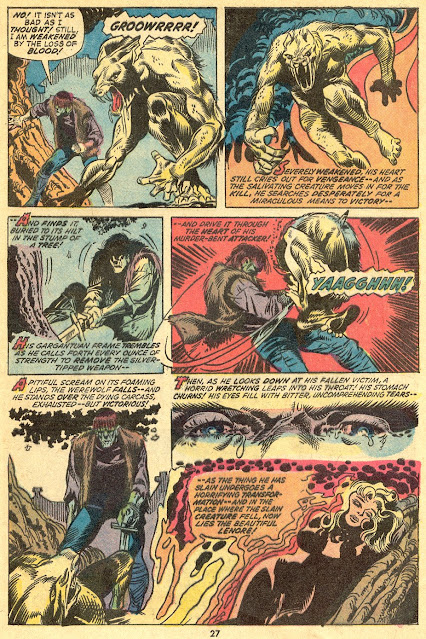 As the villagers surround the heartbroken Monster, he readies for a fight, but a man in black steps forward. . .a priest.  He gently tells the Monster that it was Lenore that was possessed by a demon, and that he knows the Monster is the true victim and not their enemy.
And so, the Monster leaves the village behind him, knowing that the only love he's ever known was a lie.  Now all that he has left is to continue on his journey to find the last living Frankenstein. 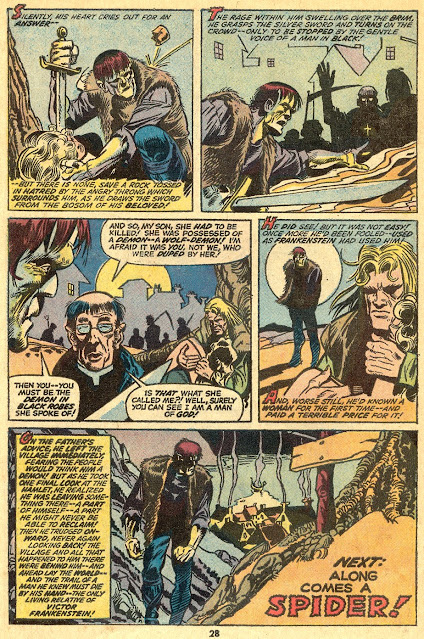 The End. . .To be continued.
THE REVIEW:
I'm gonna come right out and say it. . .this comic was a GREAT read!
Yeah, it follows the extremely well-worn story path of "The beautiful woman is actually the horrible monster", but Gary Friedrich puts so much emotion and pathos into it that you hardly notice until the (admittedly predictable) end of the story when the "twist" is revealed.  There is some seriously good writing here! It's engaging from the first page to the last.  You can definitely tell that Friedrich had his heart in writing this story.
On the art side of things. . .Mike Ploog delivers in a big way!  The art in this comic has such a sense of energy and motion that it almost seems to move across the page.  Every page is so full of wonderful detail that you just want to linger on for a moment or two extra before turning to the next one.
Together, Friedrich and Ploog give the reader something really interesting and unusual.  I am definitely going to keep my eye out for more Frankenstein comics, especially if they can engage me like this one did.

When it comes to Bronze Age Marvel comics, I think of superheroes. . .Captain America, Fantastic Four, Iron Man, Spider-Man. . .all the greats that made Marvel "Mighty".  But every now and then, I read a comic like this one that reminds me Marvel DID step outside the superhero box, and that there's some really great Marvel comics out there without a single spandex costume to be found!
The tale of Frankenstein's Monster is a tragic one, and writer Gary Friedrich leans into that with this dark story of hope torn from the Monster's grasping hand.  Artist Mike Ploog fills each page with fantastic, detailed art that perfectly complements the grim tale being told.
This comic is just a great read from cover to cover, no doubt about it.  I highly recommend it to anyone looking for a great example of Bronze Age comic art and storytelling.  For fans of Frankenstein movies, books, etc. in general like myself, I'm going to say this issue is a must-read!  It's been collected a couple of times, so if you can't find the back issues, collected and online versions are out there.
Overall, this issue was a slam-bang winner, and probably the best of the bunch so far for this 2022 Longbox Junk Halloween party.  It's a shiny nugget of back issue gold!
Up Next. . .
Yep. . .you guessed it.  MORE Longbox Junk Halloween fun!
Be there or be square.
- read more
1 2 3 4 5 6...33 Previous >>