Welcome back to Longbox Junk, where I write comic reviews even though nobody asks me to!

It's October!  As we head toward the final stretch, just a few days before Halloween, I feel the need to provide a very important public service announcement:
Ladies.  Just because there IS a "Sexy Hand Sanitizer" Halloween costume, that doesn't mean anyone should wear a "Sexy Hand Sanitizer" Halloween costume.  Okay?  I shouldn't have to tell you this.  Just sayin'.
Public service announcement over.  Let's talk about comics!
I've got the Longbox Junk paper time machine prepped, fueled, and ready for a little trip backward 67 years to the Golden Age of comics for a look at some of the late, great Stan Lee's horror writing.  Ready?
*Puts on ridiculous steampunk goggles*
Let's do this!
*Pulls gigantic lever*
Here we GOOOOOOOOOOOOOOOOOOOOO! 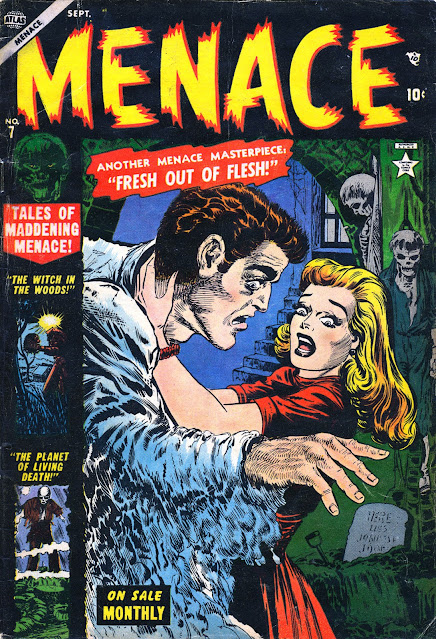 (Wait. . .is that Phil from Modern Family?)
COVER: Carl Burgos
THE COVER:
I'm gonna be honest and say that I got this comic in an estate sale auction lot of about a dozen comics I mainly bought for the 1968 Dell King Kong one shot (probably the LEAST "valuable" comic in the lot).  I've never read this comic because the cover just isn't that interesting to me.
Until now, all it got was a quick flip through to judge condition, and then off to be forgotten in the depths of my many longboxes.  The cover is okay, I guess, but nothing special.  Beyond the bold yellow on black of the title and the nicely done female figure, nothing really grabs my eye.  Let's get inside this thing. . .
THE STORIES:
The Golden Age never disappoints when it comes to getting your money's worth out of a comic.  Four full comic stories and a two page text space filler for a single 1953 dime.  Not a bad stack of stories.  Let's see what they're about!
FRESH OUT OF FLESH!
SCRIPT: Stan Lee
PENCILS: Syd Shores
In the future, a bounty hunter tracks and kills humanoid robots after their failed bid to enslave mankind.  At the end of his mission, only one robot remains.  The bounty hunter discovers that it is him. 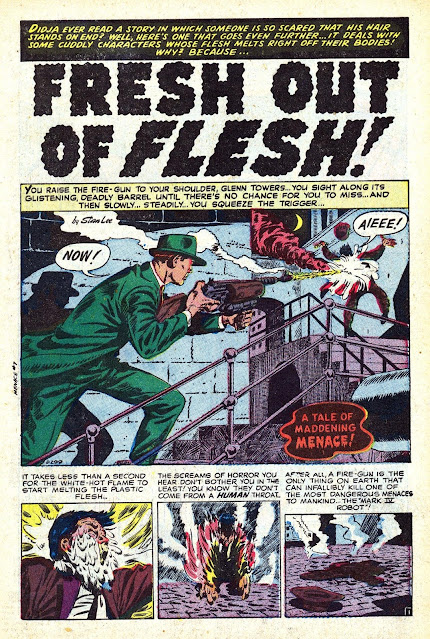 A great start to this comic!  Stan Lee provides us with a tale that is strangely similar to sci-fi classic "Blade Runner" fifteen years before the story it was based on (Do Androids Dream of Electric Sheep, by Philip K. in 1968) was even published!  But even without the similarities, this is a great little nugget of science fiction with a Twilight Zone twist.
NEXT!
THE DREAM CASTLE
(Text-Only Story - 2 pages)
SCRIPT:  (?)
A writer by the name of Henri Drago is haunted by constant nightmares of being chased through a castle by ghostly creatures. . .the dream always ending at a certain door before he could run through it.
Eventually, the dreams interfere so much with his work that, on the advice of a doctor, he takes a vacation to Italy.  One day, after a mysterious storm, he finds himself taking shelter in a ruined castle. . .the castle from his dreams!
Sure enough, he is pursued through the castle by spirits after being told that he is the last in the family line of the evil nobleman who lived in the castle long ago, and that the spirits can only be free if he dies.
He finds himself at the door where his nightmares always end, but when the throws it open and runs through, he falls to his death and frees the innocent spirits. 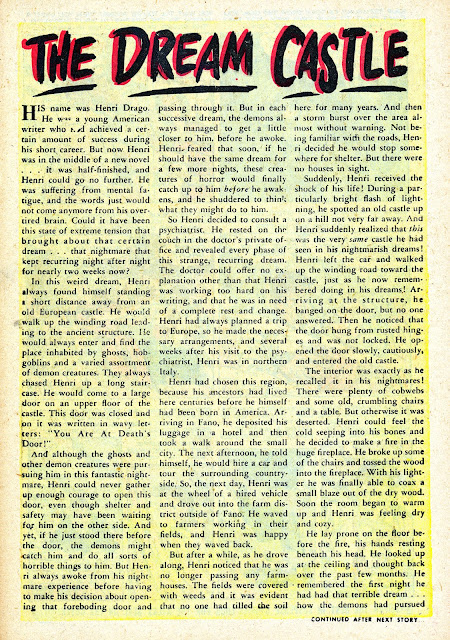 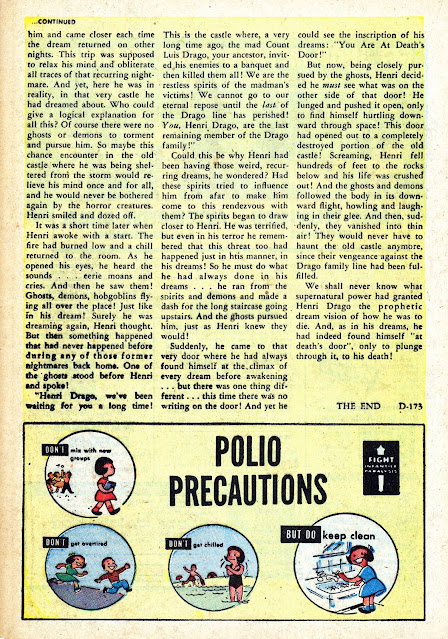 Actually, this story is pretty long and elaborate, compared to other text pieces I've seen during this little Retro Review journey I've been on.  It's a decent enough story following the well-trodden path of "Nightmares become reality", but what REALLY caught my interest was the "Polio Precautions" public service announcement at the bottom of the second page (scanned above).
It was an interesting reminder that the world has been through pandemics before, and not so long ago.  This tiny little thing in a 67 year old comic book actually brought me a moment of peace and reflection on the ability of mankind to make it through the worst times.  Sometimes, a little hope can be found in the most unexpected places.
NEXT!
THE PLANET OF LIVING DEATH
SCRIPT: Stan Lee
PENCILS:  Russ Heath
An alcoholic first officer accidentally causes his star ship to crash on the deadly planet of Osirus.  The survivors are met by hostile aliens that telepathically communicate that they will free the humans and repair their ship if they are given the secret of atomic energy.
The rest of the crew refuses, but the first officer (knowing he will go to prison if he returns to Earth) bargains with the aliens to give them the atomic secrets in exchange for a ship of his own and the Captain's beautiful daughter.
The aliens agree, but as the traitor prepares to take off, he finds to his horror that the Captain's daughter isn't HIS Captain's, but the alien Captain's. . .a hideous and deadly creature! 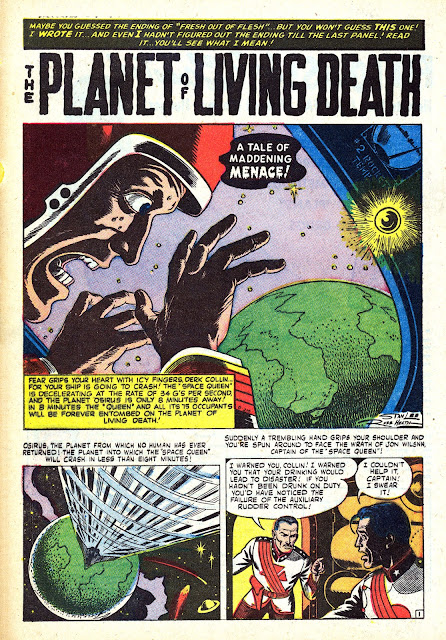 Another engaging and entertaining science fiction story from Stan Lee!  It follows the very well-worn path of "The traitor gets what he deserves", but the twist ending actually took me by surprise.  Not an easy thing when you've read as many comic stories as I have!  But what REALLY makes this story is the outstanding artwork of Russ Heath!  It's just a fine example of some great Golden Age artwork, with thick inks and interesting designs.  Every panel is worth lingering over for an extra moment.
MOVING ALONG!
THE WITCH IN THE WOODS
SCRIPT:  Stan Lee
PENCILS: Joe Sinnott
A young boy's father decides to break his son's habit of reading scary comic books by reading him fairy tales, starting with the story of Hansel and Gretel.  But he discovers that the stories from his childhood are even worse than what can be found in comics. 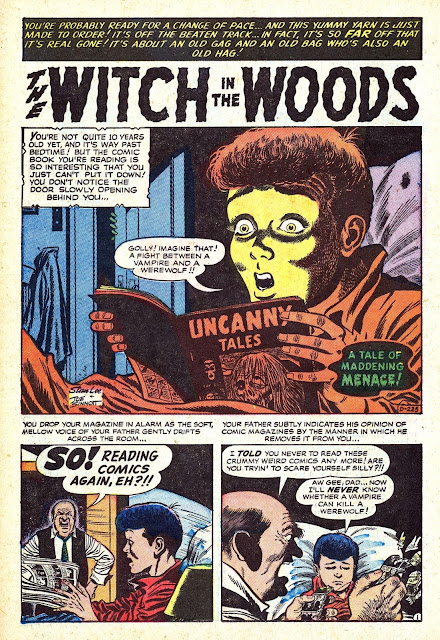 During the bit of research I did into this comic, this story is actually the only one that anyone seems to mention because it was written by Stan Lee (along with a few other stories along these lines) in direct response to the unfolding drama that led to the Comics Code.  It ruthlessly mocks the idea of censoring comics by comparing them to "innocent" fairy tales that are actually quite gruesome when you take a close look at them.
The story itself is mostly just a comic adaptation of Hansel and Gretel bookended by the boy and his father.  It's a decent enough story with some really good artwork by Joe Sinnott, who I know more as an inker than a penciller, especially from his work with Jack Kirby.
AND FINALLY!
YOUR NAME IS FRANKENSTEIN!
SCRIPT: Stan Lee
PENCILS:  Joe Maneely
Frankenstein's Monster rises from a long entombment and wanders, looking for companionship.  Unfortunately, despite saving a couple from their burning farmhouse, the Monster is judged only on his looks by the townfolk, who attack him.
As the Monster lays dying, the couple he saved reflect that perhaps it is they who are the monsters. 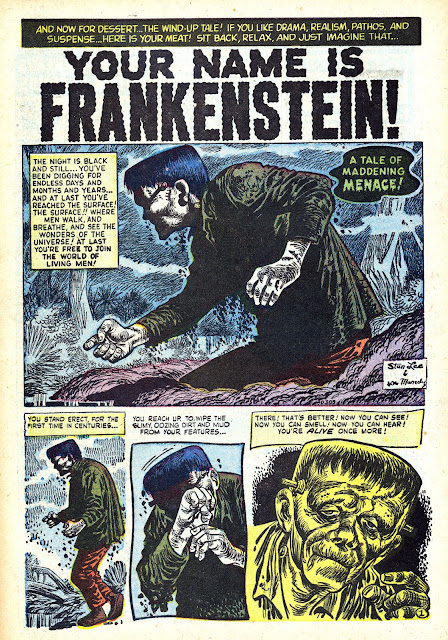 This comic goes out on a good note with a well-written tale following the "Man is the monster" path that Stan Lee followed a LOT during his later years writing superhero tales.  It's a familiar message, but Lee gives this story some interesting pathos by writing it in the first person.  Joe Maneely brings the story to life with some great, creepy artwork that really catches the eye.

Overall, I have to say that this was a great comic!  Not a single clunker to be found and very readable despite being almost seventy years old, with lots of great art to be found through the whole thing.
This is probably one of the best Golden Age comics I've read.  I hate to admit it, but a lot of the older comics I have seem like not much effort was put into them.  This one just feels different, like some thought and creative energy was given by Stan Lee and the various artists.  Is this the best comic I've ever read?  Not even close.  That said, it's definitely something I can point to when someone asks about good Golden Age comics I've read.
If you're a fan of Stan Lee, Horror comics, Golden Age comics, or any combination of the above, I can heartily recommend this comic.  Unfortunately, good copies of the original seem to be pretty pricey. . .you're not going to find this one in the bargain bin!  The good news is that it's been reprinted in collections a couple of times, and it's also on ComiXology, so it won't break the bank if you want to check it out.
Up Next. . .
Halloween is just about here, but I think I have time to squeeze in one more bit of Longbox Junk Halloween fun!
Join me on a trip back to 1970 for a look at a comic featuring Bernie Wrightson, Roy Thomas, Stan Lee, Steve Ditko, Jack Kirby, and MORE!  IN ONE COMIC!  That's a heck of a lot of talent for one comic book.
Marvel's Chamber of Darkness #7.
Be there or be square!
- read more
1 2 3 4 5 6...33 Previous >>