A few weeks ago, I got inspired to return to my Longbox Junk roots and review some. . .well, some Longbox Junk!  Early Bronze Age Green Arrow keys and Golden Age Lone Ranger comics and the like are great, but you're not gonna run into them out in the wild every day.
But HERE'S a comic you won't have much trouble at all finding.   I can practically guarantee that you're going to find at LEAST one Night Man comic in any random bargain bin you might find yourself digging through.
And if, for some strange reason, there's no Night Man comics in that bin, I'd be willing to bet cash that there's going to be SOME sort of representation of Malibu's Ultraverse in there. . .Mantra, Prime, Hardcase, and UltraForce are probably the most common.
I don't know how many Ultraverse comics Malibu printed, but they definitely leaned HARD into their shared superhero universe.  I'm saying there's a LOT of these comics out there.  If you go Longbox Junkin' then you know exactly what I'm talking about.  Ultraverse comics aren't exactly rare.
But are they good?  Let's take a look at one and find out! 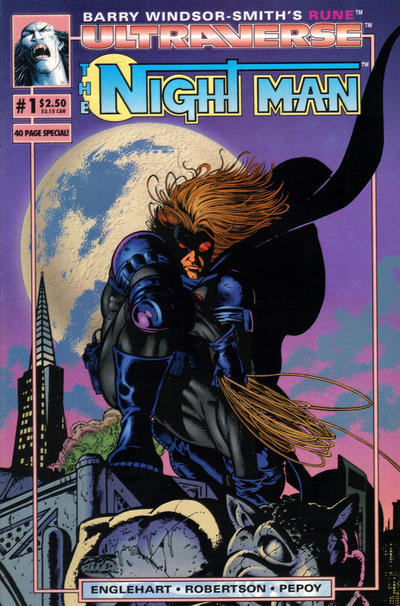 THE NIGHT MAN
SCRIPT: Steve Englehart
PENCILS: Darick Robertson
INKS: Andrew Pepoy
COVER: Darick Robertson
THE COVER:
I LOVE this cover!  I actually own 4 copies of this comic because that cover catches my eye every time and I forget I've already got it in my collection.  It's got an obvious Batman vibe to it, but the character has his own sort of personality that sets it apart from being an outright pastiche.
But what REALLY catches my attention here are the glorious colors! The pink and purple early evening sky, the blue highlights on Night Man's costume, the red hair, the deep black inks contrasted with the backdrop of a huge full moon.  It's dark, it's moody, it's just a fantastic comic book cover, period.
THE STORY:
We begin our tale following Night Man on his first outing as a new super hero.  As he jumps to attack a gang breaking into a house, he muses on the events that have brought him (and us) to this point. . . 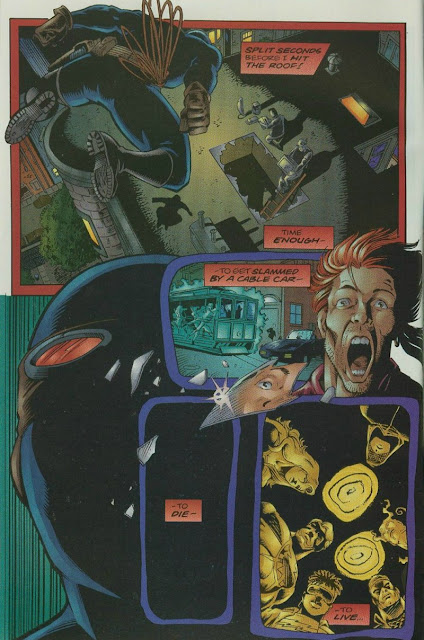 We learn that Night Man is actually one Johnny Domino, a famous saxophone player who was involved in a traffic accident that left a piece of metal lodged in his head and eyes that are hypersensitive to light.
After being released from the hospital, Johnny is shocked to discover that he can hear the thoughts of a passing man. . .evil thoughts of murdering a woman!  Johnny thinks that he might be crazy, but then considers the possibility that he's not, and he might be the only person who can save the woman from death.  He decides to follow the man. 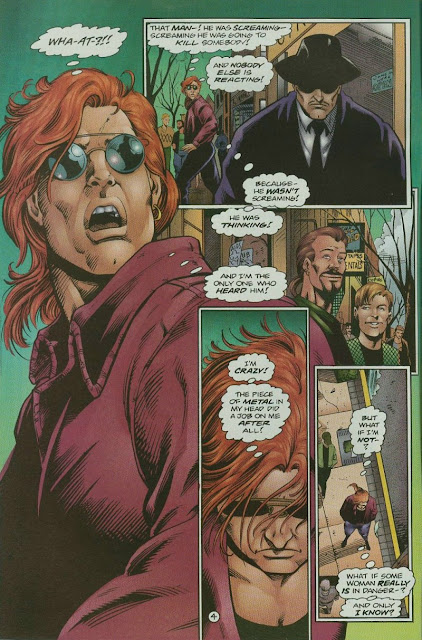 After following the man to a knife store, Johnny tries to tell the police.  Without evidence, they laugh him off.  Johnny decides to continue the investigation on his own.
He follows the man to a beach-side restaurant, where he listens in as the man flirts with his waitress, revealing his name to be Victor Omar.  As Johnny listens in, Omar asks the waitress out on a date that coming Saturday.  Omar discovers Johnny spying and forces him to make his escape. 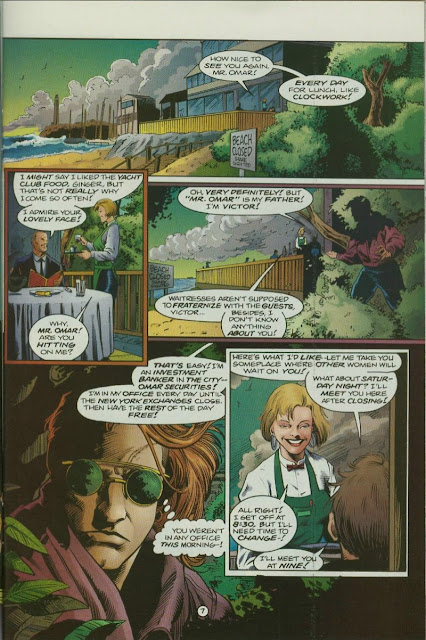 Later, Johnny questions his sanity as he thinks back on the events of the day, but when someone takes a shot at him through the window, Johnny's resolve to save the waitress is hardened as he realizes that it was probably the mysterious Mr. Omar who had followed him home. 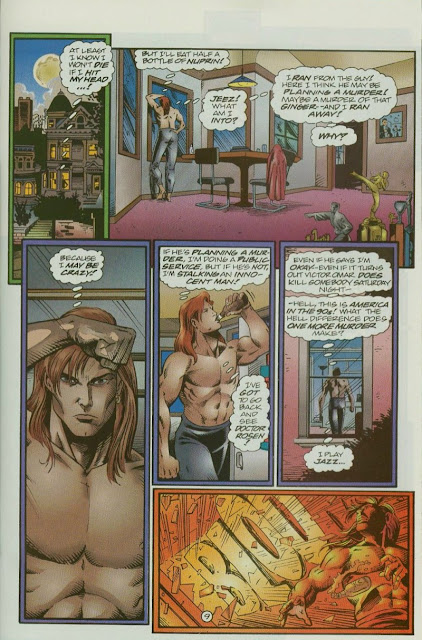 Which brings us back to the beginning of the story as Johnny, now Night Man, confronts the gang of burglars as part of his training to try and save the waitress from Omar.  Unfortunately, Johnny's inexperience is no match for the hardened criminals and he finds himself fighting for his life. . . 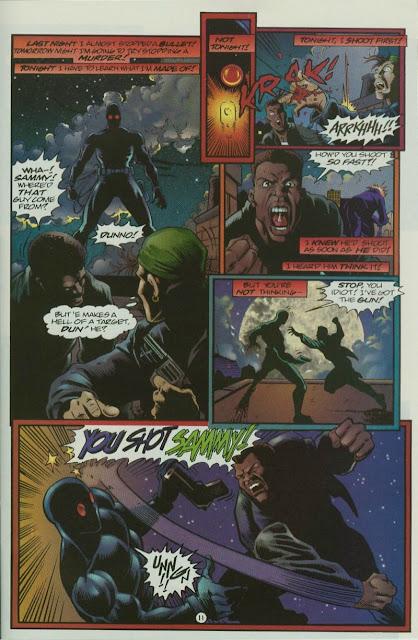 Only his extensive martial arts training manages to save Johnny, who barely makes it out of the encounter alive before being forced to flee once the police arrive on the scene.
The next day, he decides to take another angle to saving the waitress by going to the restaurant and using his fame to try and seduce her into going out with him instead of Omar.  The waitress (named Ginger) is suitably seduced, but won't break her date with Omar. 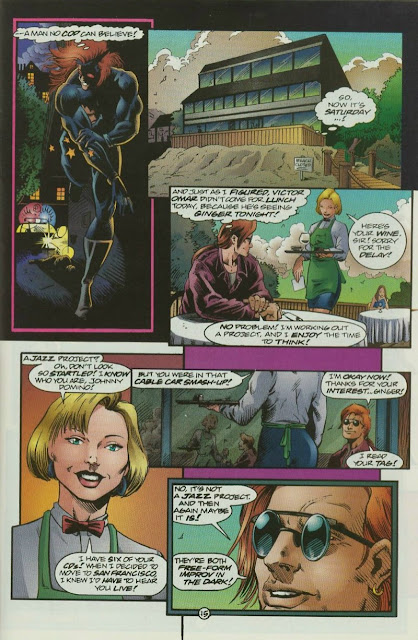 With time running short before Ginger's date with Omar that night, Johnny visits with his father. . .a former police officer now in charge of security at a run-down amusement park.  While there, he learns that a shady real estate developer is trying to buy the park against the wishes of the owner.
After a brief confrontation with the developer, Johnny returns home with what he REALLY went to the park for. . .his father's old access codes to the police database, so he can continue his investigation into Mr. Omar. 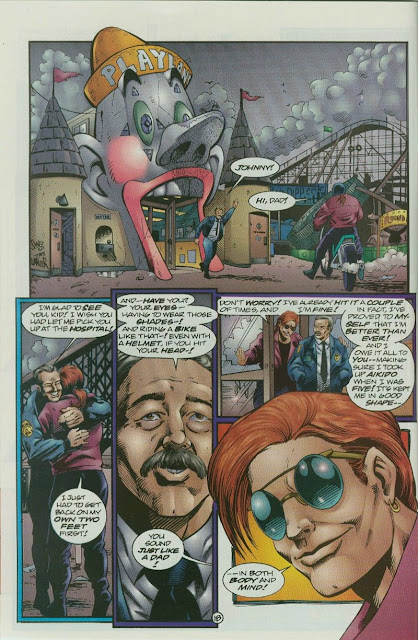 Using his father's police database codes, Johnny discovers that Victor Omar is listed as a missing person. This cements his determination to save Ginger.  That night, he returns to the restaurant as Night Man, using the knowledge gained from his failed mission the previous night to improve his costume so as to protect him better in a fight. . . 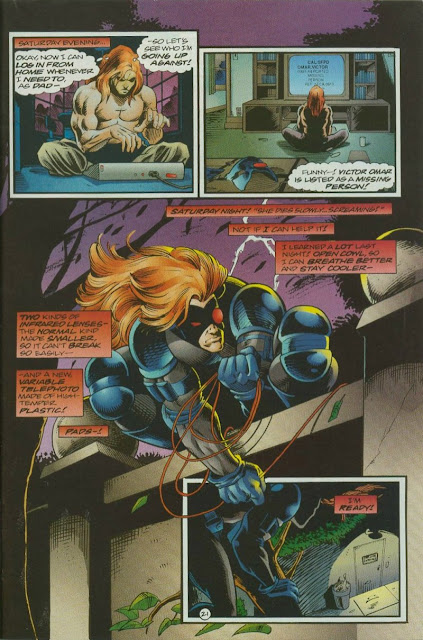 As Night Man sees Ginger leave the restaurant, he tries to warn her that she's in danger, but to his surprise, it's not Ginger at all!  It's an insanely- grinning man who introduces himself as "Death-Mask" wearing a wig and Ginger's clothes.  He attacks Night Man with a knife and the two begin to fight! 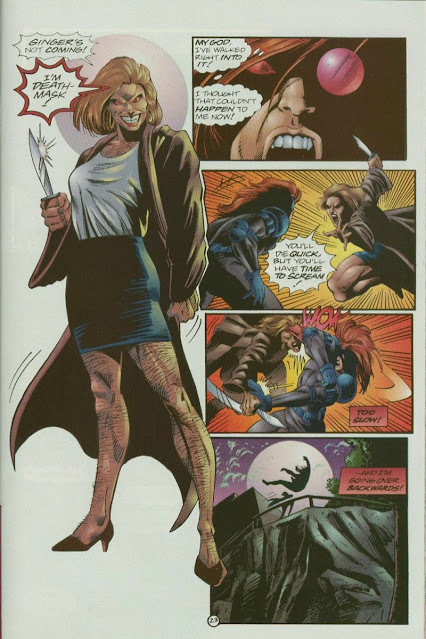 During the fight, Night Man is knocked over an embankment and onto the beach below, where he is horrified to find Ginger's dead body. . .WITH HER FACE CUT OFF!  He also makes the gruesome discovery of Victor Omar's face next to Ginger's body, and he realizes that Death-Mask wears the faces of his victims!  Night Man doesn't have long to ponder this terrifying fact as he hears a boat motor and sees Death-Mask making his escape.  Night Man commandeers another boat and gives chase! 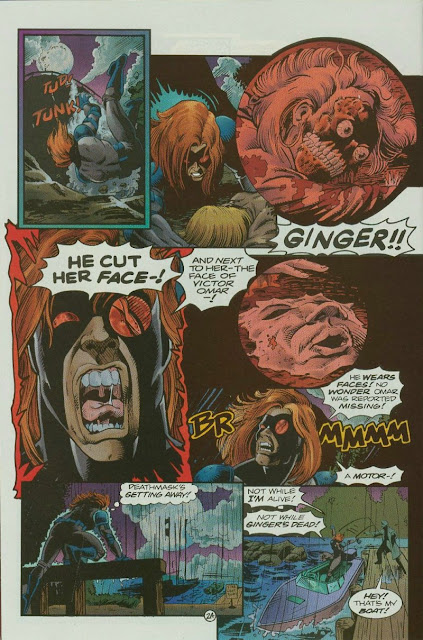 Night Man manages to catch up to the fleeing killer and jumps to attack him, enraged by the gruesome death of Ginger.  Death-Mask taunts Night Man during the fight, forcing him into defending. 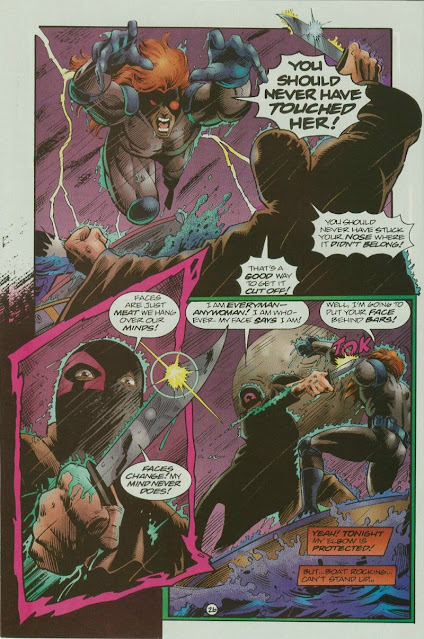 As Death-Mask and Night Man fight, the murderer tries to escape by jumping in the water and swimming to the other boat, but as he does, he is attacked by a shark!
Believing Death-Mask to be dead, Night Man decides that he was given his power to hear evil thoughts for a reason, and he reflects on his new powers. As he returns to shore in the boat, we see the hand of Death-Mask rising out of the water. . .it looks like he's survived the shark's attack! 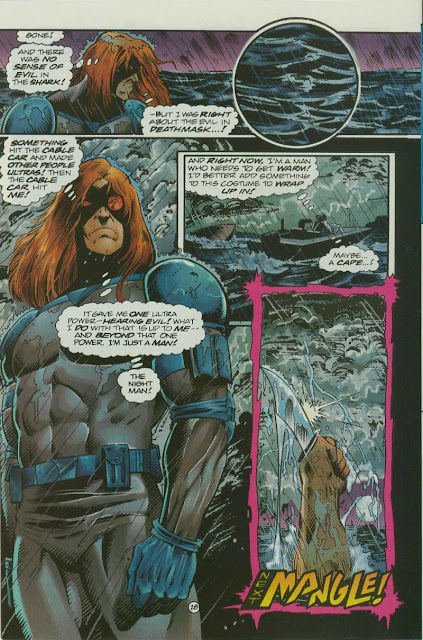 To be continued. . .
THE REVIEW:
Okay.  There it is.  Night Man #1.  Let's break it on down!
What we have here is a pretty straightforward story introducing the new hero, Night Man.  My overall impression is that it seems a bit rushed and a little too compacted.
Steve Englehart is generally a good writer, and I'm not sure what sort of constraints he was working under here, but it just seems like one issue wasn't really enough space to devote to the transformation of Johnny Domino, saxophone player, into Night Man, vengeful hero of the dark.
Don't get me wrong.  The story isn't BAD.  It's actually very readable. It's nicely-written and fast-paced, with some interesting ideas and moments to be found.  I just think it could have been better with a bit more room to breathe, so we could get to know our new hero a little better.
The sudden transformation of Johnny Domino into Night Man over the course of TWO DAYS (including somehow gaining a spandex superhero costume complete with telescopic infrared lenses)  requires a bit more of a stretch of my comic book suspension of disbelief than I'd like.
The overly-compacted narrative aside, the story also suffers in one part from a bit too much reliance on story beats from Frank Miller's seminal Batman origin story "Year One".  Night Man's initial outing being a miserable failure requiring improvements to his costume is just a little TOO familiar to be coincidence.
Other than those two things, the story is fine.  The sudden horrific turn toward the end was actually a bit of a surprise that I liked a lot.  I'm not sure where things go from here, but I wouldn't mind reading a few more issues to find out, especially if the story keeps leaning toward the horror end of superhero comics.
So that's the story.  Let's talk about the art.
Darick Robertson is an artist that I became a fan of from his fantastic work on "The Boys".  This is some of his earlier work and I can definitely see the progression through the years.  The art in this comic certainly displays a lot of style and flair that I really like, mostly in Robertson's unusual panel arrangements and figures that break the boundaries of their panels.
It's quite a bit different visually than the art I know Robertson from, but I think I can chalk that mostly up to his doing his own inks these days compared to having someone else ink his pencils in his earlier work.  That's not to say the art is bad at all.  It's really very nice, and the mentioned inker (Andrew Pepoy) brings the depth and shadow needed for a story like this.

This is another comic that I didn't really have high hopes for.  But I was pleasantly surprised to find underneath that fantastic cover a pretty good story backed up with some really interesting artwork.
The story is overly-compacted. . .two issues worth of story packed into one. . .and it's a bit derivative of Frank Miller's "Year One" in places, but Steve Englehart does a decent job of introducing a new character and setting things up so that I want to read the next issue.  That's pretty much the basic expectations I have for the first issue of a series, so that's a big plus.
The star of the show here for me, though, is Darick Robertson's art.  It's interesting in many ways and each page has something new for the eye to linger on.  I really enjoy his panel layouts a lot!
Overall, this isn't a GREAT comic book. . .but it's a good one.  If you're a fan of the more "street level" comic heroes, then Night Man is worth a look, especially if you also enjoy comics that throw a little horror into the superhero mix.
It doesn't look like the series was ever collected in trade, and I don't see it on ComiXology, so the back issue bins are probably the best place to pick Night Man up from.  But like I said at the beginning, it's not a very hard series to find.
Up Next. . .
It's time for some spooky Longbox Junk October fun!
Last year, I leaned into the older spooky comics in my collection by featuring all Retro Reviews.
This time out, I'm shining the spotlight on NEW horror comics that have come out over the past couple of years.  Nothing older than 2019.  Let's see what sort of spooky stuff is on the stands these days!
Be there and be scared.
- read more
1 2 3 4 5 6...33 Previous >>