Welcome to Longbox Junk! It's the place where you can find all the comic reviews you never asked for!

It's been a while. My apologies. I had what I THOUGHT was a pretty bad case of the flu (because I've been vaccinated) that was actually a nasty dose of Omicron-Style Covid (which I guess doesn't really care if you've been vaccinated or not). It's had me down for almost two months now and I'm STILL not entirely over it (I'm gasping for a decent breath of air as I write this). Needless to say, I've been doing a lot more Nyquil sleeping than working or comic book reviewing.  In other words: Worst paid vacation EVER!

On the bright side, I didn't end up in the hospital, and I'm feeling much better now, so there's that.

ANYWAY. . .
A belated Welcome to 2022!  My wishes for a happy and prosperous year for everyone reading this!
You may have noticed by now that the Bruce Lee mini I promised last time out is NOT what this Longbox Junk entry is featuring.  I got most of the way through the review before I realized that I was missing the last issue.  Not only was I missing the last issue, but the series ITSELF is unfinished. . .which I find strange, since the publisher has the incomplete story for sale on their website as a trade paperback!  That just doesn't seem right.  I don't really want to promote an unfinished story being sold as complete.
BUT. . .
There's plenty more Longbox Junk out there!  So let's take a look at a superhero that has only recently started to move past a sort of strange reputation as a joke, despite his being one of DC's most reliable characters, carrying several solo series over the years, as well as being a recognizable mainstay hero in most versions of the Justice League.  I'm talking about Aquaman!
The comic at hand is a bit new, as far as Longbox Junk goes.  It's part of a series of one-shots DC put out just before they rolled out their "Rebirth" initiative after they ended the "New 52" after a five year run.  They were meant to re-introduce DC's characters and their new status quo going forward from the abandoned New 52 continuity.
THAT SAID. . .
Truthfully, I'm not much of an Aquaman fan.  Like Marvel's Moon Knight, it seems that EVERY writer that comes onto an Aquaman project wants to leave their mark by making significant changes.
Unfortunately (and also like Moon Knight) this leaves the reader with a sort of schizophrenic experience. . .with no two versions of Aquaman being alike beyond the basic framework of the character.  You have dark and gritty Aquaman.  You have political Aquaman.  You have fun and friendly Aquaman.  So on and so forth.  It's kind of hard to get a handle on Aquaman, going from one series to the next.
So we have a comic that's meant to re-introduce Aquaman to comic fans.  Now the question becomes: What version of Aquaman is DC re-introducing here?  Let's find out! 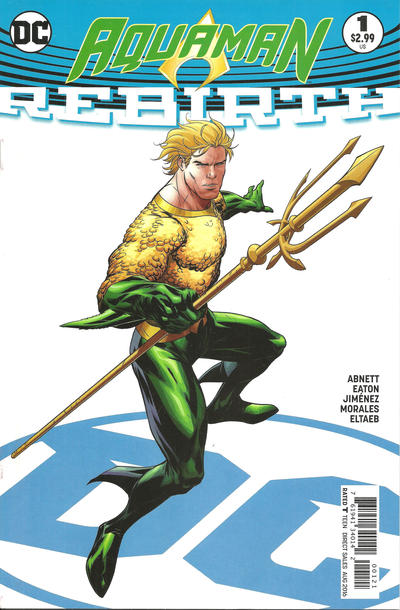 THE DROWNING
PROLOGUE: AFTER THE DELUGE
SCRIPT: Dan Abnett
PENCILS: Scot Eaton & Oscar Jimenez
INKS: Mark Morales & Oscar Jimenez
COVER: Ryan Benjamin (variant)
THE COVER:
This is the variant cover for the issue (not that it makes this comic "worth" any more), and I have to say that I like it a lot!  I'm kind of a sucker for monochromatic backgrounds on a comic cover and the plain white here really sets off the boldly-colored character portrait nicely.
Aquaman himself is in the classic costume, advertising right on the front of the comic part of the direction DC is going before you even read a single page.  This is just a great cover.  It's simple, but the simplicity is what sells it to me.  Let's get inside!
THE STORY:
We begin our tale in the Western Atlantic Ocean, where Aquaman speeds toward a suspected Atlantean terror group called "The Deluge" as they move in for an attack on North America's East Coast. 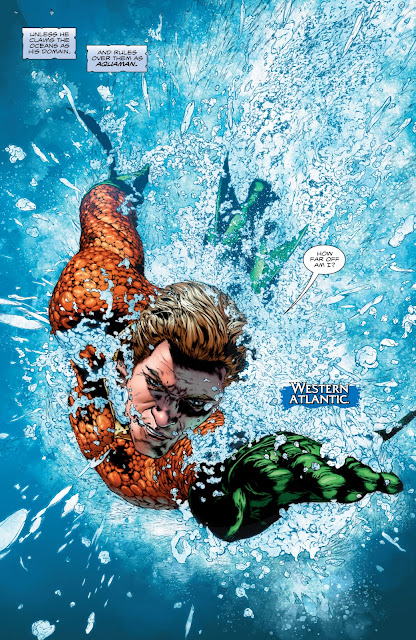 What a fantastic opening splash page!
As the self-proclaimed "Protector of The Seas" heads for his target, he is given mission updates from his wife, Mera, and the crew of "Spindrift Station", Atlantis' first dry land embassy. . . 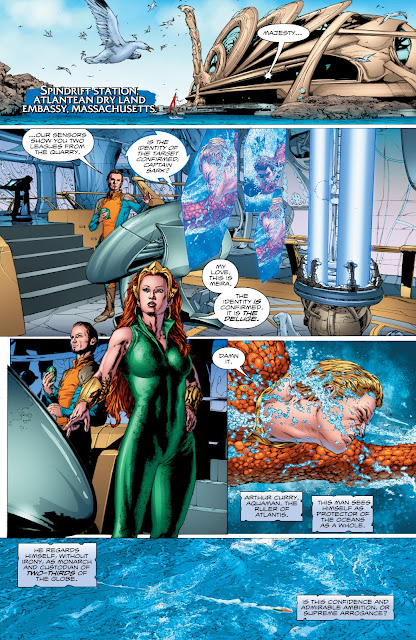 Aquaman arrives and finds himself confronting Corum Rath of the Ninth Tride, a lower Atlantean house, but still a noble one.  Aquaman tries to appeal to Rath's honor, but finds himself being rebuked as a false king and a lover of the surface world more than his own. . . 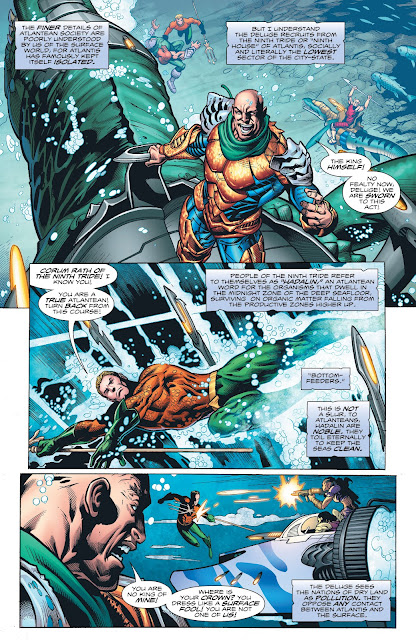 Aquaman quickly discovers that the Deluge have Atlantean fusion bombs that they plan to use to destroy Boston with.  He leaps to the attack!  On Spindrift Station, the crew monitoring the Sea-King's battle are disappointed to see their leader fighting his own kind to save surface dwellers.
Mera defends her Royal husband. . .letting the crew know in no uncertain terms that a terrorist is a terrorist, no matter where they come from, and that to not stop the attack could lead to another war between Atlantis and the United States, destroying all that their King has tried to achieve. 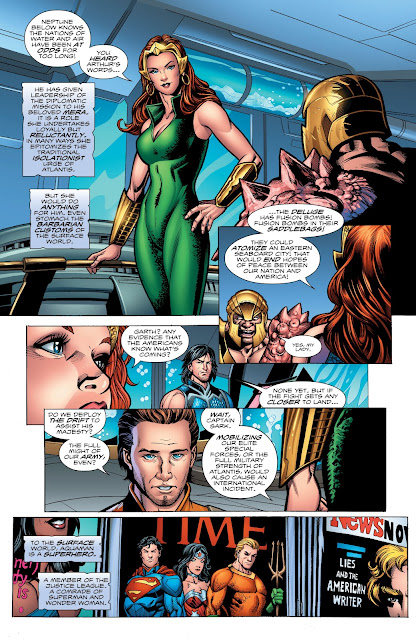 As the battle against the Deluge continues, our unseen narrator muses on how Aquaman is seen as a bit of a joke to many on the surface world. . .the hero that talks to fish.  But the truth is that the Sea King is a supremely powerful being and most surface dwellers have never seen him use his full powers. . . 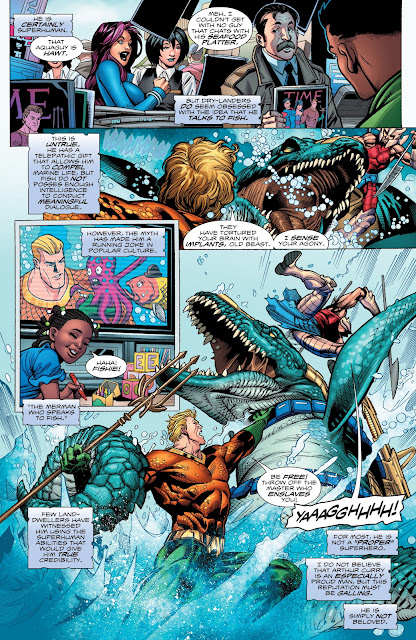 On the OTHER hand, there are also many surface dwellers that see Aquaman as a dangerous figure. . .leader of a secretive and powerful nation that has attacked the surface world several times, often leaving behind death and devastation. 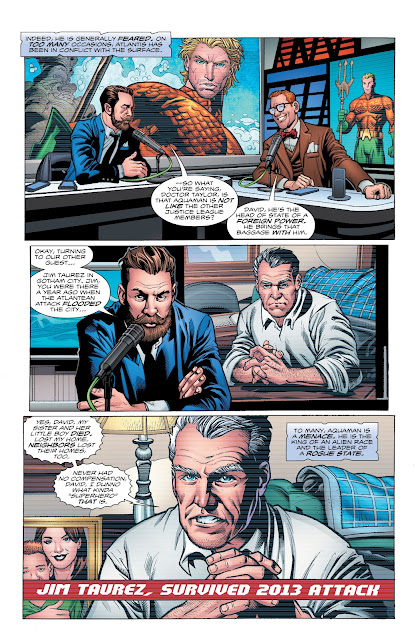 Our unseen narrator continues. . .revealing that Aquaman is actually a man of two worlds.  His mother, Atlantean royalty.  His father, a human lighthouse keeper. The self-proclaimed Sea King doesn't really belong in either world, and isn't particularly liked by either one in turn. 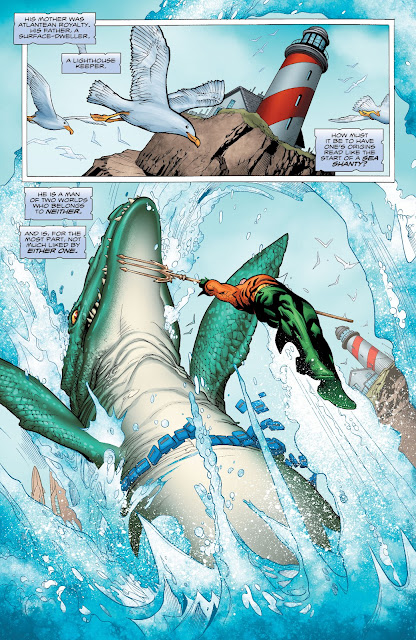 After defeating the enslaved sea creatures and the lesser minions of the Deluge, Aquaman finally is able to battle Corum Rath in a one-on-one fight.  Aquaman easily defeats the once-noble Rath and calls for the security forces of Spindrift Station to secure him as a prisoner. 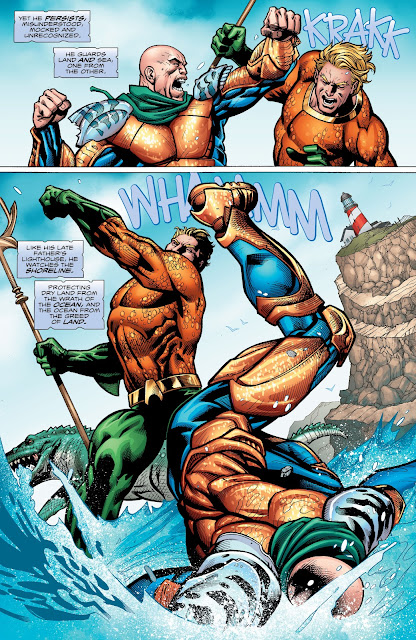 We then follow Aquaman to his favorite seafood restaurant, where he meets with Mera as the unseen narrator continues to speak of the dual nature of the superhero. . .belonging to two worlds, and yet neither.  Constantly trying to bring the two together.  A man of peace ever at war. . .with himself, with his royal duties, with the surface world. 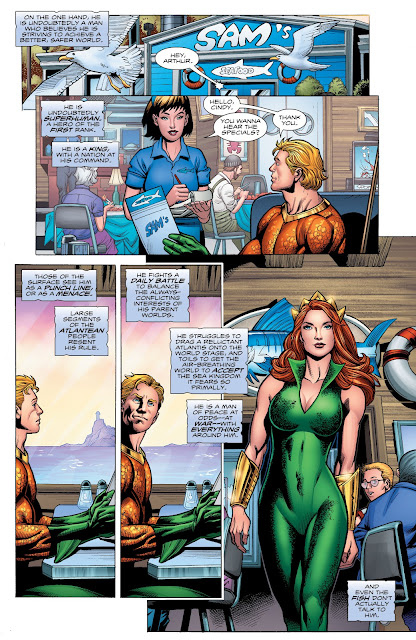 Mera and Aquaman discuss the day's events. . .wondering why the Deluge are so hostile just because the King wants peace with the surface dwellers.  Mera understands both sides of the conflict, but of course takes her beloved husband's side by revealing that more terrorists have been found, as well as one of their hidden bases.  The rebellion is growing and is larger than they suspected. 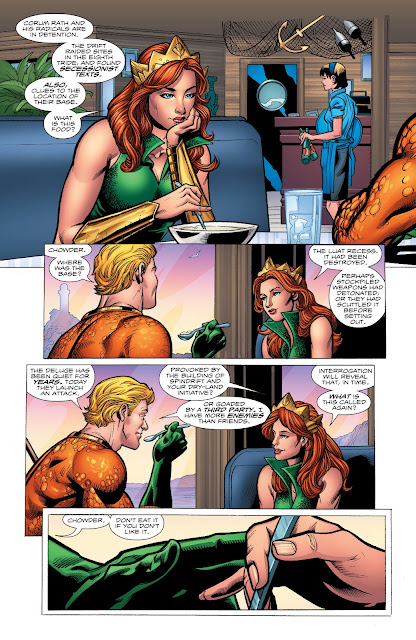 As the two royal lovers speak, we learn that they are under surveillance by none other than our mysterious unseen narrator.  We learn of plans to destroy Aquaman. . .first through Mera, then through the destruction of Spindrift Station and the end of the uneasy peace between Atlantis and the Surface World, and finally ending the hero himself. 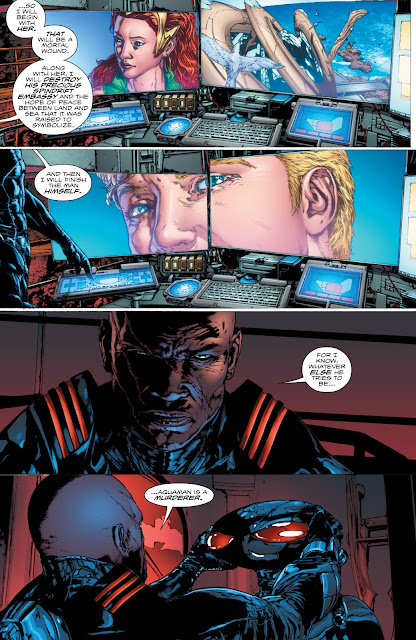 At the end, we see that the unseen narrator that has been guiding us through the strengths and weaknesses of Aquaman is none other than his old foe, Black Manta!  And he is set on revenge for the death of his father by the Sea King. . . 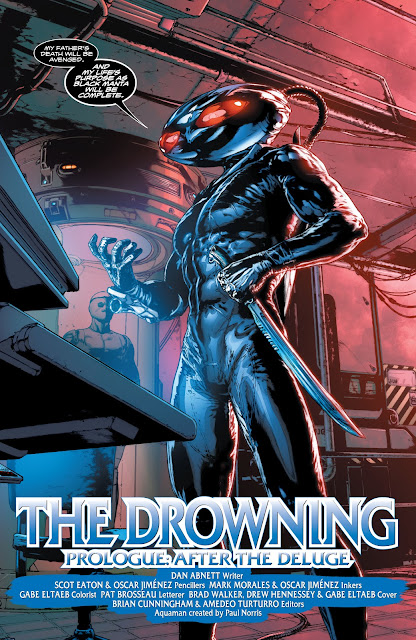 The End. . .To be continued.
THE REVIEW:
Okay, then.  There it is.  DC's re-introduction of Aquaman moving forward into the "Rebirth" era of their titles.  Let's break it on down!
Like I said above, I'm not a big fan of Aquaman, so I came at this with an open mind and tried to let this comic serve its purpose as an introduction (or re-introduction) to the character instead of trying to compare it to any other Aquaman comics I might have read before.  I'm looking at this like it's the FIRST Aquaman comic I've read.
Annnnnnd. . .It's not bad.  I'd say that if I were trying to introduce someone new to comics to Aquaman, this would be a pretty solid starting point. It does a good job of giving the reader a basic sketch of Aquaman as a hero with a foot in two worlds and wanting to bring those worlds together.  It leans into the character's reputation as sort of a joke, but at the same time, shows that he and his people are regarded as dangerous by many.
The framing story of Aquaman taking down Rath and his Deluge cell is okay.  Pretty much an excuse to throw some action into the mix while we learn about Aquaman and his trouble trying to keep a handle on ruling over a nation that doesn't really like him, while trying to be a heroic ambassador to a surface world that. . .well. . .they don't really like him either.
It looks like moving forward THIS version of Aquaman is going to be a little more involved in the political side of things.  I haven't read any of the regular issues of the series, but it seems like a good direction to start off in. . .especially since his enemy, Black Manta, immediately spots that Aquaman's diplomatic efforts are an obvious weak point he will be able to attack.
Speaking of Black Manta, the twist reveal that our narrator singing the praises of Aquaman's power is actually his worst enemy was a surprise that makes me want to read the next issue of the series.
SO. . .
Going by my usual expectations for the first issue of a series, this comic introduced Aquaman aand his situation in an interesting way, and it made me want to read the next part of the story.  What more could you want from a first issue?  Not much, I say!

Overall, I found Aquaman: Rebirth to be a good single issue introduction to the seafaring superhero.  I'm not much of a fan of the character, but this had just enough meat on the bone to make me interested in maybe giving Aquaman another chance.
The story itself is pretty much a loose framework to hang exposition from, but it's well-written and engaging.  The art tells the story nicely and even has a few great standout moments. . .the opening splash page of Aquaman and the ending splash page of Black Manta are two really good ones that come to mind.
All in all, I say that even if you're not an Aquaman fan, there might be enough here to make you consider taking a look at his ongoing series, so give it a shot if you spot it in the bargain bin.
Up Next. . .
I'm not sure!  It took me almost a month to write this, but like I said above, I'm starting to feel better.  Hopefully, I'll be able to get back up to speed soon and start getting the Longbox Junk going a little better than it has been.  So until next time. . .
Be there or be square!
- read more
1 2 3 4 5 6...33 Previous >>