Welcome to Longbox Junk! You want comic reviews you never asked anyone to write? You're in the right place!

The time is short.  The witching hour is almost upon us.  Halloween is just a few days away, but the Longbox Junk Halloween Party is still going!  LET'S DANCE!
Man-Thing is one of those Marvel characters that's been around for a while but isn't really known about by casual comic culture fans.  He's had a few short ongoing series in the past, but these days he just kind of pops up every now and then before shuffling back off to the swamp.  So, he's not the most visible Marvel character, but Man-Thing's got his fans. . .and I'm one of them!
That said, Man-Thing has recently had a moment in the popular culture spotlight with an unexpected live appearance on the Werewolf By Night Disney+ special (And if you haven't seen it yet. . .it's a fantastic show. Check it out.  Go! NOW!).  So, since he's getting a little bit of attention this year, how about we invite Man-Thing to the party?
Let's do it! 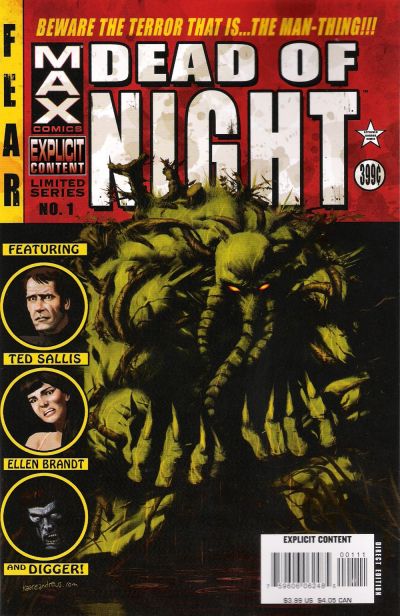 COVER: Kaare Andrews
THE COOL DARK: Part One
SCRIPT:  Roberto Aguirre-Sacasa
PENCILS: Kano & Nick Percival (Framing Sequence)
INKS: Kano & Nick Percival (Framing Sequence)
THE COVER:
I like it!  It's not the BEST Man-Thing cover out there (that would probably be Frank Brunner's cover for Man-Thing #1), but I like the Golden Age pulp mag homage.  The giant red title block is certainly an eye-catcher.  Man-Thing himself is pretty nasty looking. . .a bit more on the horror side than we normally see him.  Not bad.  Let's get inside!
THE STORY:
We begin with an introductory framing sequence.  Digger, the former "host" of Tower of Shadows and Chamber of Darkness, is our narrator. . . 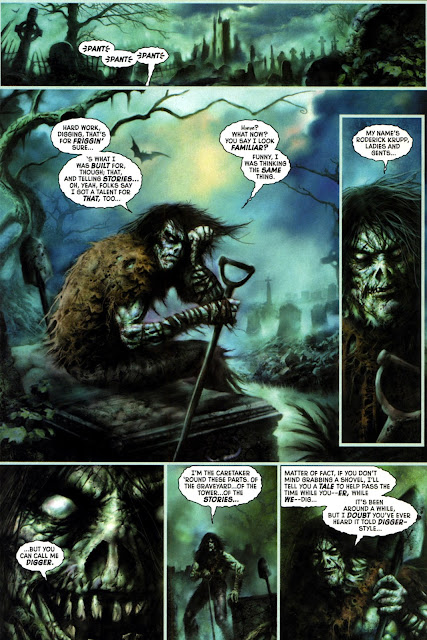 Deep in the swamps of the Florida panhandle, researcher Ted Sallis, along with his lab assistant/ fiancée, Ellen Brandt, and fellow scientist, Eric Schist, are hard at work on a secret government project to recreate the lost Super-Soldier serum that gave Captain America his powers during World War II.
Their work is almost complete and government agents are due the next day to take their research to Washington D.C. Ted is relieved that the end is near and is looking forward to his and Ellen's marriage. 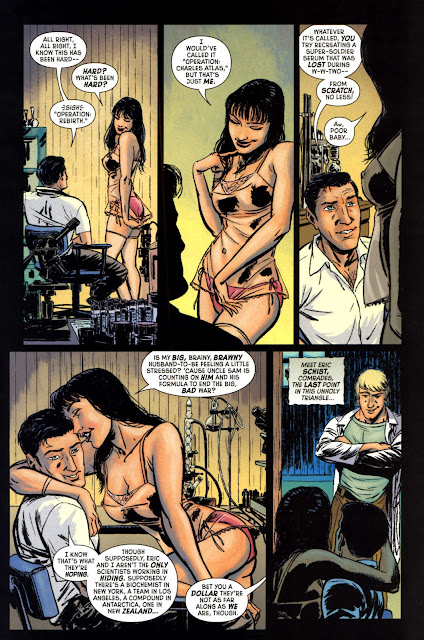 Late that night, Ted hears strange noises from a shack in the swamp behind their secret lab.  When he investigates, he is horrified to discover mutated creatures imprisoned within!  Eric arrives and tells Ted that he has started human trials despite Ted saying they aren't ready. . .and the creatures are swamp dwellers that he has been experimenting on.
Ted protests and threatens to reveal Eric's unethical experiments to their government employers.  Eric taunts Ted, revealing that they have been working for the terrorist group, A.I.M. the whole time, and that Ted is but a in their plans! 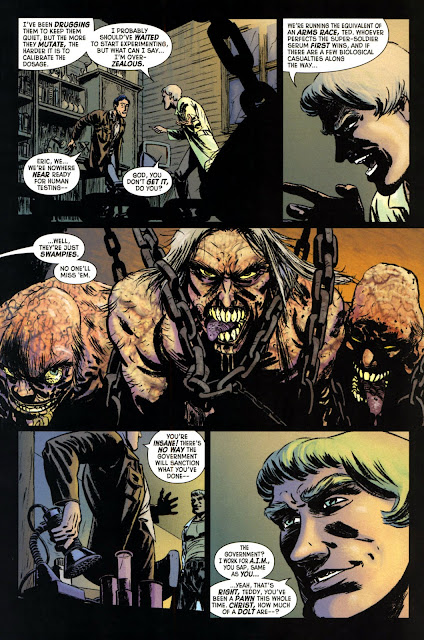 Ted manages to knock Eric out, then rushes to the lab to gather his research and the only sample of the new formula.  He plans to escape and take the research to the government.  But as he hastily gathers his notes, Ted is confronted by Ellen. . .who holds him at gunpoint and reveals that she is also an A.I.M. agent!
Ted realizes his life has been a lie when Eric returns, and he sees the obvious affection Ellen has for him.  Desperately, he dives out a window and runs into the swamp, but is shot in the back by Ellen as he flees. . . 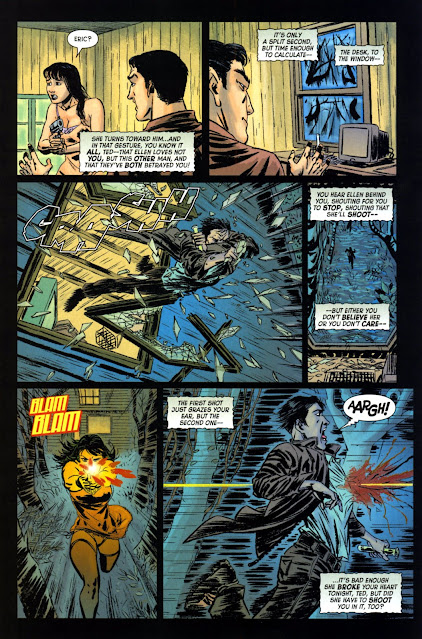 As he sinks into the muck, dying, Ted swallows the vial of experimental formula.  Something happens that night. . .the formula somehow reacts with the swamp water and somehow Ted rises from the grave, but not as a man. . .as a thing! A MAN-THING! 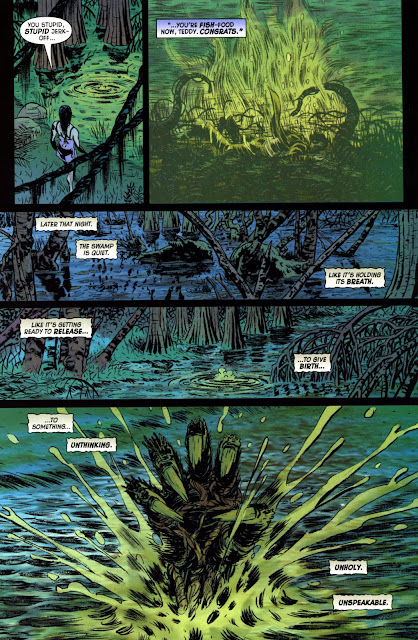 Late that night, the hulking monster that was Ted Sallis returns to the secret lab.  After freeing the mutated humans from the hidden shack, he bursts into the lab, stunning Ellen and Eric with his terrifying and inhuman appearance! 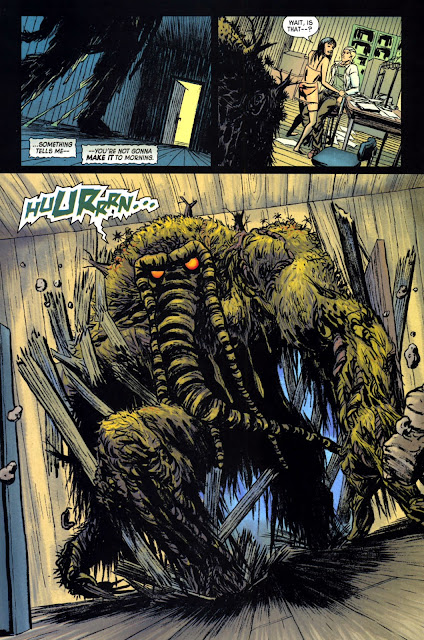 Man-Thing quickly kills Eric, then turns to Ellen. . .but something stops him.  Is there still a part of Ted Sallis inside the creature that feels pity as Ellen begs for her life?  If there is, it's gone again in a moment as he reaches out and horribly burns the woman with his very touch! 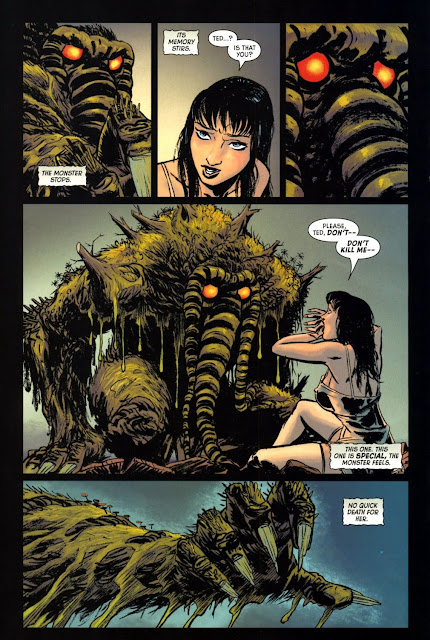 And, having his revenge, the Man-Thing leaves Ellen alive and horribly disfigured as he walks back into the dark water of the swamp, leaving his former life behind. 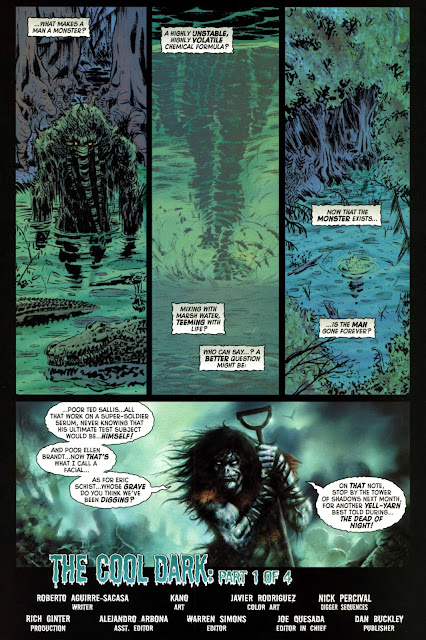 The End. . .To Be Continued.
THE REVIEW:
What we have here is a modern retelling of Man-Thing's origin.  And I have to say that it's a darn fine read!  It's a simple story that introduces Man-Thing quite well, leaning HARD into the horror elements of the character.  It's nicely written from the perspective of Digger telling the tale and has enough meat on the bone to not only be a good standalone tale, but to make me want to see what happens next!
The art is a great match for the dark tale of betrayal and revenge, with lots of shadows and fine detail.  The artist has a little trouble with human faces.  You can definitely see that his wheelhouse is in the macabre and monstrous elements of the story.  His version of Man-Thing is powerful and terrifying. . .a force of nature unleashed!  That said, I sort of wish that the artist who painted the framing story would have done the whole thing.  The painted Digger sequences are simply superb!

Although this is the first issue of a four-issue mini, it stands alone quite nicely.  It's a great modern re-telling of the origin of Man-Thing that I would certainly recommend to anyone wanting to know about the character without having to get into expensive collections or more expensive Bronze Age back issues.  It's the same basic story, but in a modern style and at bargain bin prices.  WIN!
I would also recommend this issue to any horror comic fans who are just looking for a decent little one-shot story with some dark monster fun.  Yeah, it's a Marvel Universe character, but there's nothing superhero about THIS story.
Overall, this is a nice little nugget of Longbox Junk gold!  It's the kind of thing I love to find while bargain bin diving.  It's not really "worth" anything to collectors, but it's definitely worth picking up if you should spot it.
Up Next. . .
There's not much October left, but we're turning up the music and keeping the Longbox Junk Halloween Horror party going!
Be there or be square.
- read more
1 2 3 4 5 6...33 Previous >>