Welcome back to Longbox Junk, where I write comic book reviews whether you ask me to or not!

It's that time of year again!  That's right, folks. . .it's October!  Leaves turning beautiful colors, the weather turning cool and crisp, and the sweet smell of pumpkin spice hand sanitizer!
We've been having a little Longbox Junk Retro Review Halloween party lately, but then I realized SOMETHING was missing!  What kind of Halloween party is it without that debonair creature of the night, Count Dracula?  In my humble opinion, it's not a party at all!
Let's go ahead and invite the dastardly Count into the house! 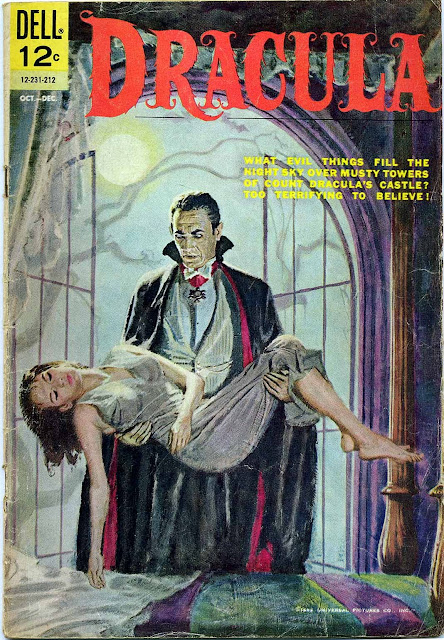 COVER:  L.B. Cole (?) or Vic Prezio (?)
THE COVER:
I've said it before and I'll say it again.  In my extremely humble opinion, Dell and Gold Key comics had some of the all-time BEST comic covers!  Don't try to fight me on it, I'll defend that hill until the end!
This is another in a huge list of fantastic painted covers from Dell.  It makes regular appearances on the Halloween version of my "Wall O' Covers" in my office at work.  What can I say about it?  Just LOOK at it!  THIS is what a Halloween comic cover is all about right here!
THE STORIES:
Under that beauty of a cover there's one full comic story taking up most of the issue, along with three one page space fillers.  Let's take a look at them each in turn. . .
THE RUSALKI, WATER MAIDENS OF DOOM
(One Page, Black and White)
SCRIPT: Bernhardt J. Hurwood (?)
PENCILS: Robert Jenney (?) or Max Elkan (?) 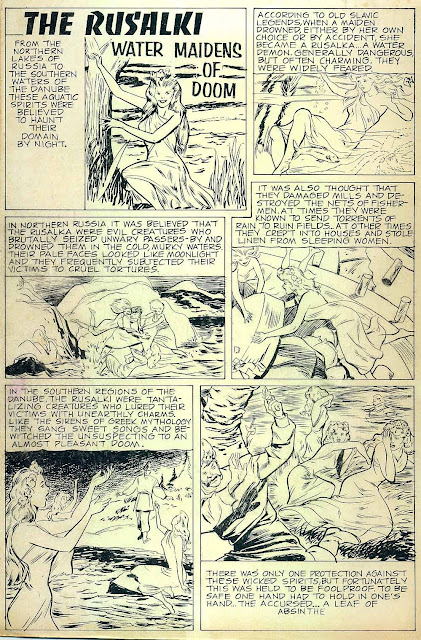 Basically a one page piece on a mischievous Russian folklore creature similar to a siren.  Actually pretty interesting and well-illustrated.  It would have been nicer in color, though.  Not a bad appetizer for the main course.
On to the main story!
THE VAMPIRE'S CURSE
SCRIPT: Bernhardt J. Hurwood
PENCILS: Robert Jenney (?) or Max Elkan (?)
Our tale begins on a dark and stormy night as physician and staunch man of science, Sir Basil Shawcross speeds to the home of  Professor Janos Tesla, expert in literature and folklore, and a good friend of Shawcross. . . 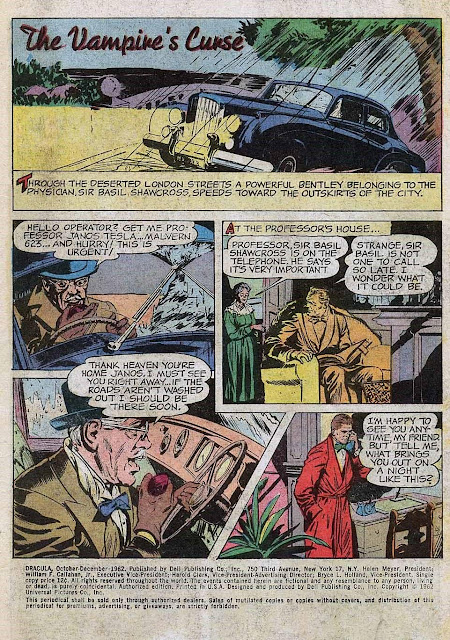 Upon arrival, the distraught Shawcross demands Professor Tesla tell him everything he knows about the legendary creature known as the Vampire.  Tesla proceeds to inform Shawcross (and the reader) about the history and known powers of Vampires.  Shawcross seems reluctant to accept that such a supernatural creature can exist, despite his friend's belief. . . 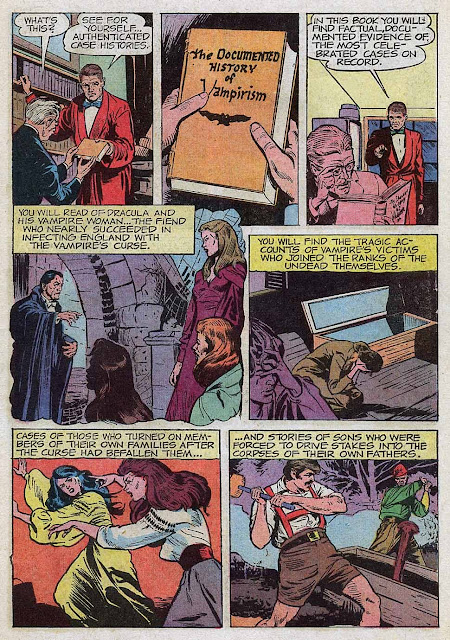 Tesla asks Shawcross exactly why he's come so late and asking such strange questions.  Shawcross hands over a telegram announcing the death of his son, Bruce, in Transylvania, where he had been working as an artist.
He continues with descriptions of his son's letters home, which started off normally until the night he met a mysterious, beautiful woman in a village graveyard, a woman named Irina who immediately captivated the young man over the course of the nights they met. . . 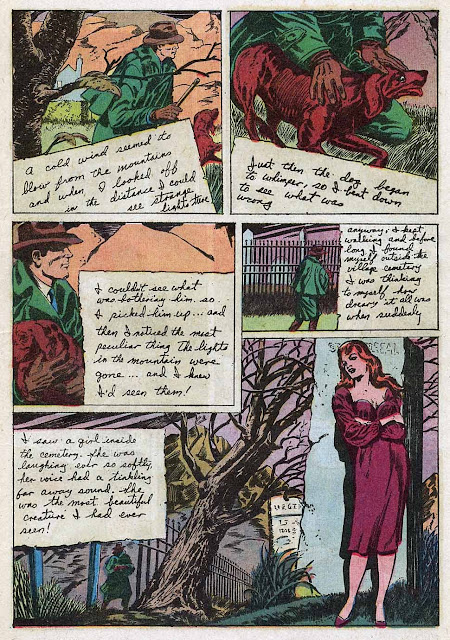 Bruce's final letters home spoke of his intent to marry Irina, as well as a strange illness that had come over him with a terrible weakness and vivid horrific nightmares.  Then the letters stopped, except for the telegram with the news of his death.
Shawcross is determined to travel to Transylvania to collect his son's body and find out what happened.  He wants Professor Tesla to accompany  him.  Tesla fears that Shawcross will be in grave danger travelling alone, so he reluctantly agrees. . . 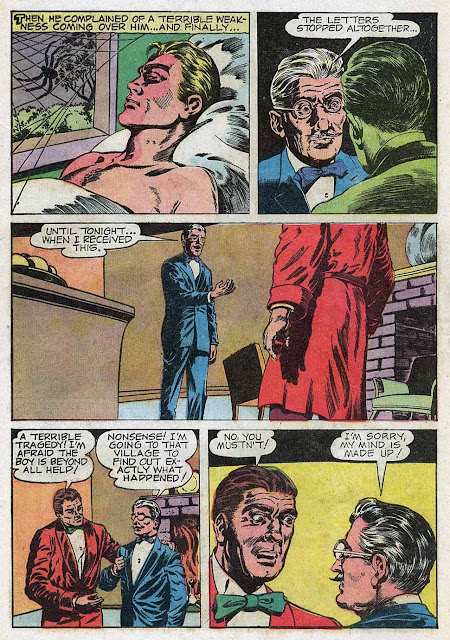 Having some idea of the supernatural creatures they may encounter, Tesla makes preparations over the next couple of days before the two friends travel to Transylvania.  Upon arrival, they find suspicious villagers and discover that the body of Shawcross' son has gone missing! 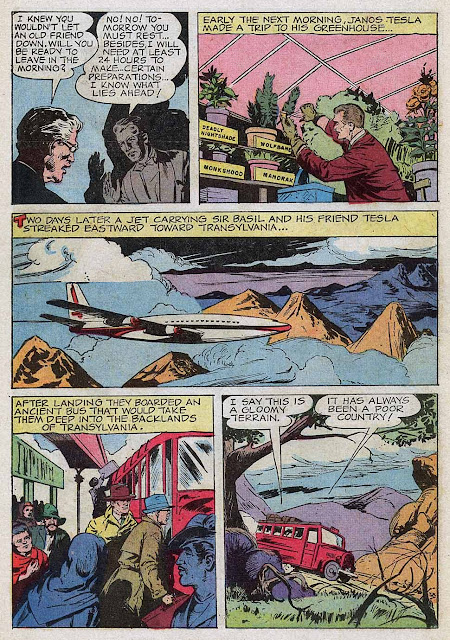 They decide to start their investigation at the inn where Bruce died.  Shawcross takes his son's room over the objections of the innkeeper.  That night, Shawcross wakes to find his supposedly dead son standing at the end of his bed!
Bruce demands that his father accompany him at once and alone.  Shawcross reluctantly agrees, but as the pair set off in a carriage in the dead of night, they don't realize that Professor Tesla is following them. . . 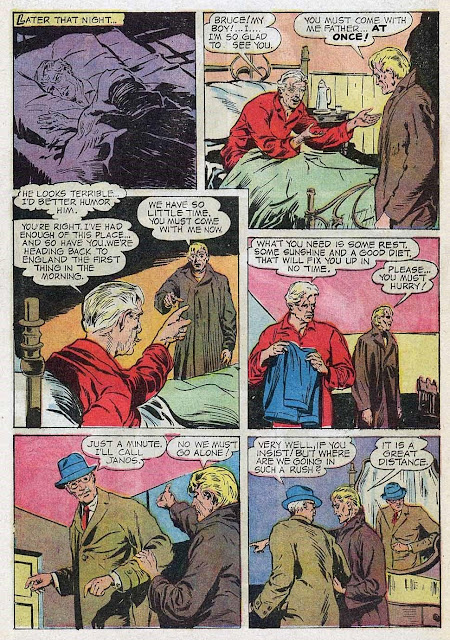 In the carriage, Bruce introduces his father to Irina, informing him that they have been married.  Irina explains that they are travelling to meet her Uncle, Count Dracula, at his castle.  Upon arrival, Shawcross is introduced to Dracula while Tesla observes unseen. . . 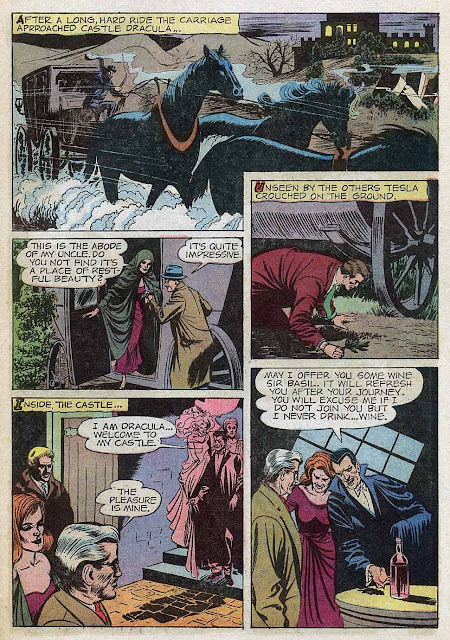 As Dracula offers wine to Shawcross, Tesla rushes in shouting that they are all vampires and he's fallen into their trap!  Dracula admits that the game is up, and that he wanted to make Shawcross an offer. . .as a doctor, it will be easier to provide the vampires with blood than by hunting.  He offers Shawcross riches in exchange for his services.
Shawcross refuses and Dracula attacks, intending on turning the doctor into a vampire and forcing him to do the Count's bidding.  Tesla rushes to his friend's defense, using garlic and wolfsbane to drive the vampires back. . .but he's too late to save Shawcross, who has a heart attack during the fight. 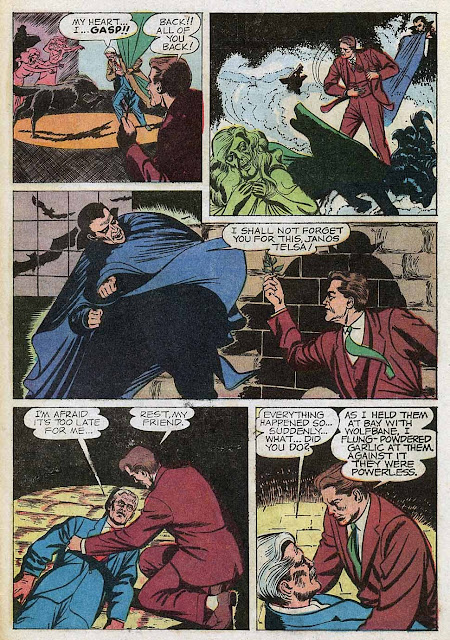 As Shawcross lays dying in Tesla's arms, he asks him to save his son.  As the sun rises and Tesla brings Shawcross' body to the village, he decides to honor his friend's final wish and work toward finding a cure for the curse of the vampire. 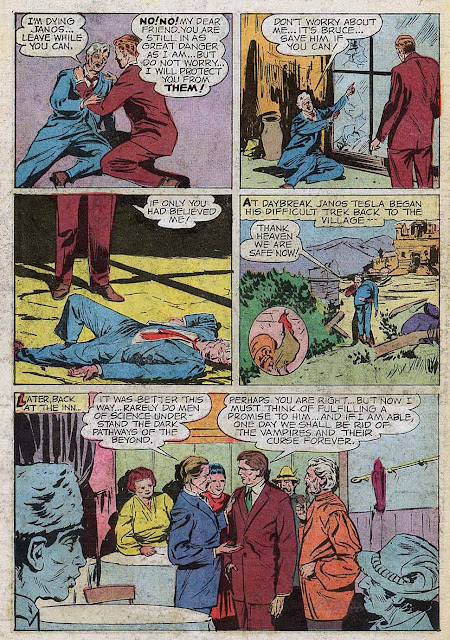 The End.
Okay.  Hmmmmm. . .
Not bad. Not bad at all.  A pretty good read.  The ending seems a bit rushed compared to the slow burn build up at the beginning of the story.  It looks like this was originally pointed toward an ongoing story with Professor Tesla vs. Vampires (that was abandoned in favor of the infamous "Superhero Dracula" series that came a few years later), which would explain the sort of dangling nature of the ending.
Other than that, I can't find much to fault in this creepy little tale.  It's well written, it has interesting characters, and I want to see what happens next.  Unfortunately, this is all we get of this story.
On the art side of things, I was pleasantly surprised to find some decent art in a Dell comic. . .which is a bit of a rare occurrence.  Dell may have had some of the best painted covers that have ever graced a comic rack, but the art inside is pretty consistently disappointing.  Is it the best comic art I've ever seen?  Not even close.  But compared to a lot of Dell's art, this stands as an exception to the standard "Great Cover. . .Lousy Interiors" I automatically assume whenever I see one of those great painted covers.
Overall, a nicely done story.  A good amount of meat on the bone to be found here.
Let's check out the final bits. . .
THE HUNTERS OF THE FOREST
(One Page, Black and White)
SCRIPT: Bernhardt J. Hurwood (?)
PENCILS: Robert Jenney (?) or Max Elkan (?) 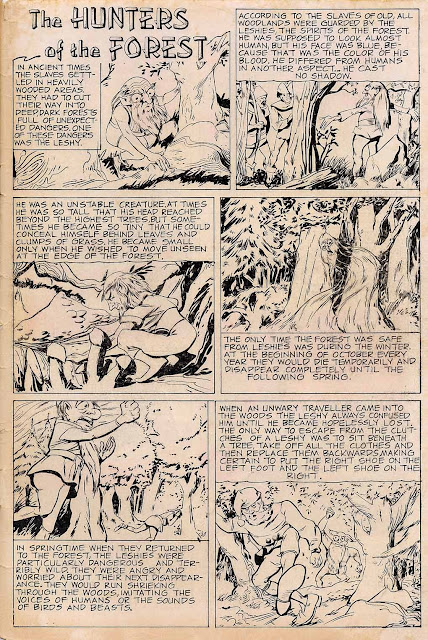 A one page article about the strange Slavic forest spirit called the Leshy.  Another pretty interesting read with some decent illustrations.  Like the first of these, it would have been better in color.  Other than that, not a bad little space filler.
AND FINALLY. . .
WITCHES' SABBATH
(One Page)
SCRIPT: Bernhardt J. Hurwood (?)
PENCILS: Robert Jenney (?) or Max Elkan (?) 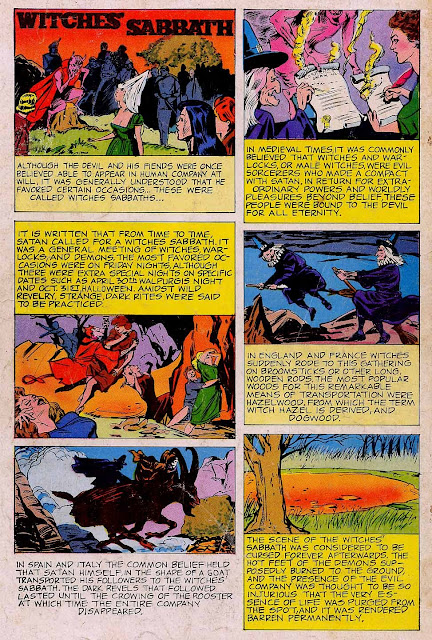 Another one page space filler. . .this time concerning the Witches' Sabbath, and in color, unlike the other two one pagers in the issue.  This one has a lot more text, but I found it the most interesting of the three.  Not a bad finish.  Not quite a cherry on top, but not bad.

One of the best parts of these "Retro Reviews" for me is taking the opportunity to learn a little bit while I'm in the process of writing a review.  I look up the artists and writers, read up on them and what else they've done.  I check out whatever I can find on the comic itself to see if there's anything interesting or possibly controversial about it.
During the course of writing this review, I DID discover something worth remarking on. . .but not about the comic itself, more about the modern information to be found on it.
It seems that about half of the sources of information on this comic (Including the specific Wikipedia page on Dell's Dracula comics) cite this issue as being an adaptation of the 1931 movie.  As you can see from the synopsis above, it is not.  I'm not sure if different sites simply copy and paste information without checking (that seems the case), but here at Longbox Junk we actually READ the comic at hand.  This is an original story, NOT an adaptation of the movie.
ANYWAY. . .
As for the comic itself, I found it to be well written and entertaining.  It's too bad this storyline was abandoned by Dell as they tried to move their line more toward superheroes, including their ill-advised attempts to turn Dracula, Frankenstein, and The Wolf Man into costumed heroes.
I'd certainly recommend this one to anybody wanting a decent Silver Age vampire story under a fantastic painted cover.  It might be a bit pricy to find a copy in decent condition, and it doesn't look like it's been collected or reprinted, but keep your eye out!
Up Next. . .
The Longbox Junk Halloween party keeps going!
The paper time machine is heading back to the Golden Age again for a look at 1953's Beware #13.
Be there or be square!
- read more

Two shots! Longer than a one shot, shorter than a mini! Do they even make these any more?