Welcome to Longbox Junk, where you can find all the comic reviews you never asked for!

Ah. . .October.  'Tis the season when you can go shopping for Halloween candy while enjoying the festive holiday cheer of Christmas music!
ANYWAY. . . 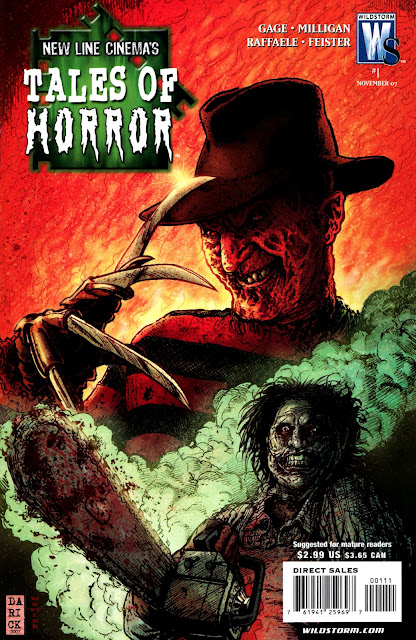 COVER: Darick Robertson
THE COVER:
A fine piece of comic book horror courtesy of Darick Robertson!  Very detailed and a little bit uncomfortable. . .just the way I like my horror art!  Leatherface down in the right corner in particular is nightmarishly creepy.  The cover is a winner, let's see what's inside!
THE STORIES:
Two stories in this one.  The first based on Texas Chainsaw Massacre, the second based on Nightmare on Elm Street.  Let's take a look at them in their own turns. . .
THE TEXAS CHAINSAW SALESMAN
SCRIPT: Peter Milligan
PENCILS: Tom Feister
INKS: Ton Feister
When a door-to-door chainsaw salesman picks the wrong house in Texas to peddle his wares at, he THINKS he has bad luck when he doesn't make the sale, but by driving away with his life, his luck has actually never been better. 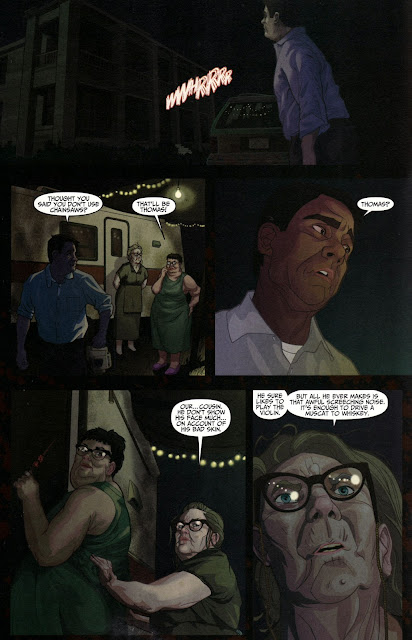 THE REVIEW:
This first story leans more into comedy than horror, with a hapless chainsaw salesman (is there even such a thing?) ignoring every warning and signal to leave and obliviously trying and failing to hard-sell a new chainsaw to the family from the Texas Chainsaw Massacre.
It's. . .okay.  The whole concept seems a bit forced, but I did like the ending with the salesman getting away without even knowing how close he was to dying, disappointed because of his bad luck.
The art is really the high point here.  It has a dark hybrid pencil/paint feel to it, with supreme detail on character faces and expressions that makes this short fluff of a joke story visually interesting.
Overall, this one is decent, but nothing memorable.
NEXT!
COPYCAT
SCRIPT: Christos Gage
PENCILS: Stefano Raffaele
INKS: Stefano Raffaele
When a demented fan of Freddy Krueger captures Freddy's attention with his murders, Freddy is forced to make a deal with the copycat killer.  But Freddy is a solo act and turns the tables on the copycat by using his own blackmail against him when Freddy finds ANOTHER killer who idolizes him.  In the end, the world loses two Freddy Krueger wannabes while the original returns to haunting dreams. 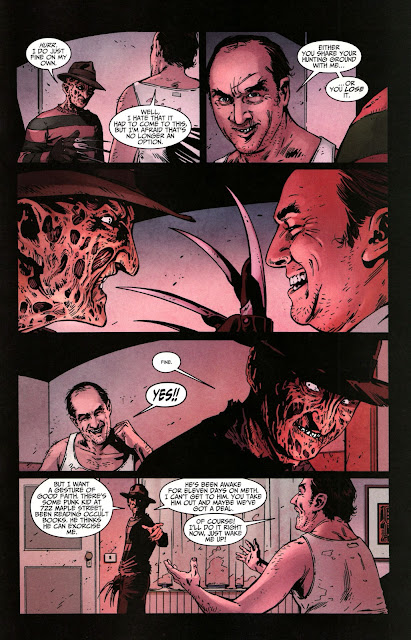 THE REVIEW:
Not bad.  An interesting little story about the misguided fandom that surrounds serial killers.  The idea is good, but the execution IS a bit forced.  The notion of Freddy Krueger being blackmailed into a partnership of sorts falls flat, and that notion is what props up the whole story.
That said, there's some pretty funny moments in the story (like the first, it leans a bit more toward comedy than actual horror) and the artist gives the whole thing a gritty, dirty look that feels right for a story about a terrible character like Freddy Krueger and his scummy wannabe fans.
Overall, this story is better than the first, but still not very memorable in the long run.

This was an interesting little comic.  Both stories lean more into comedy than actual horror, and although the stories are pretty good, I just wanted a little more horror out of my horror comic.
The art was the real star of this show.  From the creepy Darick Robertson cover and all the way through, this IS a very nice-looking comic book.  The art here almost makes up for the so-so stories.
Overall, I'd say give this one a read if you happen to spot it in the bargain bin, but don't go out of your way to find one unless you're a big Texas Chainsaw Massacre or Nightmare on Elm Street fan.  For anyone else, this is going to be a quick and ultimately forgettable read.
Up Next. . .
Yep.  You guessed it.
MORE Longbox Junk Halloween Horror fun!
Be there or be square.
- read more
1 2 3 4 5 6...32 Previous >>