Welcome to Longbox Junk, the place to find comic reviews you never asked for!

*Looks at the blog proudly*
Just LOOK at all that Halloween Horror fun this year!  A fine batch indeed.  Zombies, maniacs, ghosts, demons and the Bogeyman.  Yessir. . .a MIGHTY fine batch.  But wait. . .there's something missing!
Vampires! What's Halloween without Vampires?
Let's get some vampires up in this Halloween Party! 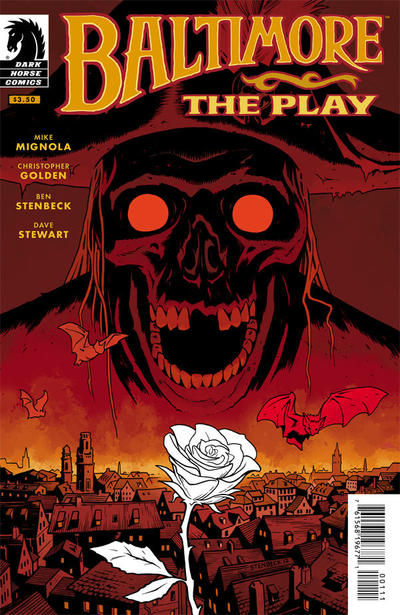 COVER: Ben Stenbeck
THE COVER:
I really like the colors on this one a lot!  The red and orange hues set off by deep, shadowy blacks with a single, mysterious white rose in the foreground give this cover a creepy gothic atmosphere that doesn't really say much about the story, but practically demands you buy this comic to find out!  It's a really cool piece of horror comic art.  Let's see what's inside!
THE PLAY
SCRIPT:  Mike Mignola & Christopher Golden
PENCILS: Ben Stenbeck
INKS: Ben Stenbeck
THE STORY:
Verona, Italy. 1917.  Lord Henry Baltimore arrives in the city and finds it consumed by a virulent plague.  Inquiring about the creature he pursues. . .the vampire called Haigus, the monster who had destroyed his life and family. . .he is directed to a theatre, but discovers that it is a burnt-out hulk, his quarry nowhere to be found. 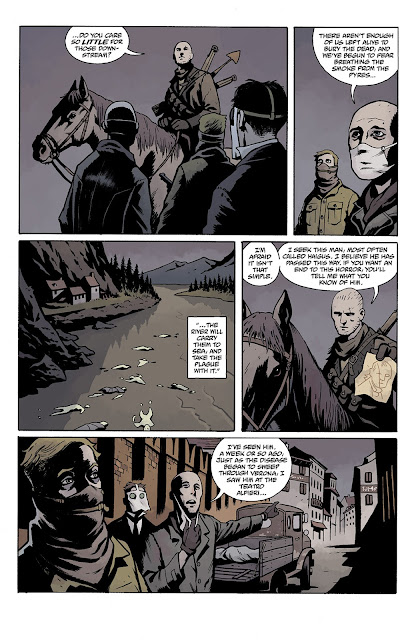 After the prologue, we flash back to two weeks prior to Baltimore's arrival in Verona.

Haigus is working with a theatrical director named Gnecco on a play, La Morte Rossa Trionfante (The Triumphant Red Death). Helping Gnecco with his masterpiece is the severed and preserved head of Edgar Allan Poe in a jar, kept alive by black magic. Wait. . .WHAT? Never mind. Just roll with it!

Haigus, Gnecco, AND Poe's severed head are all in love with the play's star, the beautiful Isabella. 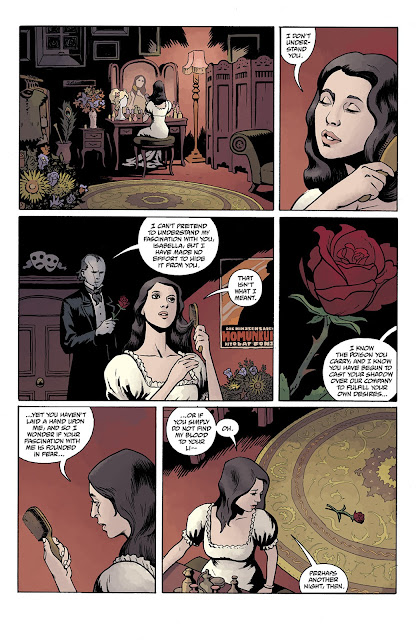 Haigus finally comes to realize the mysterious power Isabella holds over him is because she is actually a Muse. . .an immortal vampiric spirit that feeds on the creative souls of her victims, one of the deadliest forms of vampire, capable of even making other vampires her victim! 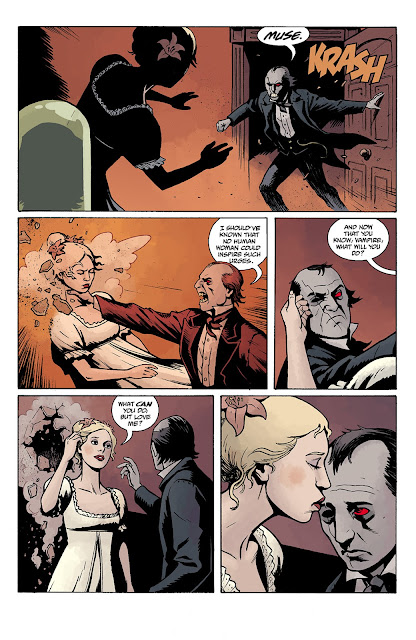 But Haigus is no ordinary vampire! Once he realizes what sort of creature Isabella is, Haigus manages to break her hold over him during the debut performance of the play.  As he is attacked by Gnecco and Isabella's other slaves in a jealous rage, Haigus kills Gnecco and burns down the theatre. 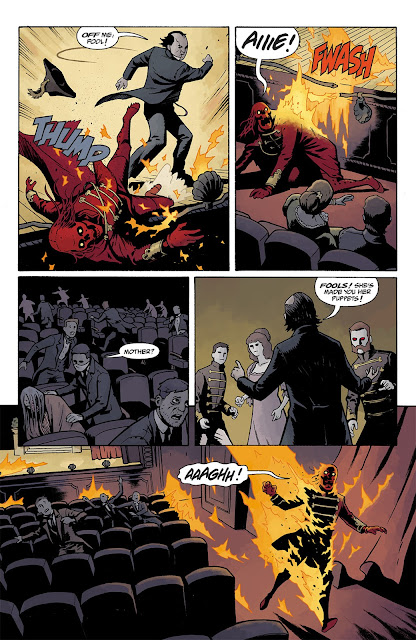 Isabella barely escapes the carnage, taking with her the severed head of Edgar Allan Poe.  Haigus also flees Verona.  A week later, Lord Baltimore arrives at the burned-out theatre.  Seeing that his quarry has escaped him yet again, he moves on. . .knowing that he is leaving behind the remnant of Haigus' vampire cadre to prey on Verona, but he cares only about his pursuit of Haigus. 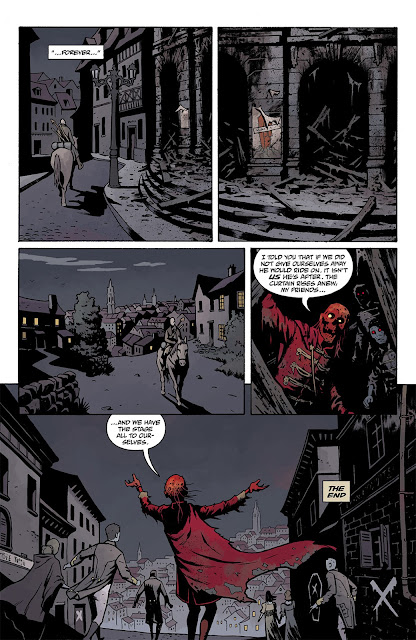 
THE REVIEW:
Okay, not bad.  This one leans in the direction of a more gothic, atmospheric kind of horror than most of the other comics I've reviewed for this Longbox Junk Halloween party.  It has a dark, oppressive feel to it all the way through.  Mignola and Golden definitely know how to set a gloomy scene!
Fans of horror literature that read this comic will be able to see that it rests on the shoulders of quite a few different stories that came before. . .whether it's paying homage or just borrowing elements is a hard call.  Mignola and Golden successfully combine the influences and put their own stamp on it, that much is certain.
Readers will spot moments that call back to Interview with a Vampire, Masque of The Red Death, Phantom of The Opera, Conqueror Worm, and even a splash of Moby . It's an interesting mix, to be sure.
The art is a perfect companion to the dark, gothic tale. . .lending a foreboding and gloomy feel throughout, with heavy shadows and a muted color palette set off by splashes of bright color to bring the drama of a scene forward.  It's the perfect art style for this sort of story!

Although this is a stand-alone story, it has enough connection to the overarching tale of Baltimore's relentless pursuit of Haigus across war-torn Europe in the early 20th Century that it makes me want to read more.  I'm not familiar with Baltimore beyond this and a Free Comic Book Day offering I picked up, but now that I've dug into one of the chapters, I definitely want to read more.
Mignola and Golden deftly mix together multiple influences and come up with a tale that reeks of hopelessness and doom.  Stenbeck's art reinforces the gloom and darkness of the story with bold, deep shadows and muted colors.  Together, they bring a strange little supernatural tale that will surely appeal to those who like their horror a bit more on the gothic and literary side of things.
Up Next. . .
This party ain't over yet!  MORE Longbox Junk Halloween Horror fun!
Be there or be square.
- read more
1 2 3 4 5 6...33 Previous >>