Welcome to Longbox Junk, where I write comic book reviews nobody asked for!

If the house is rockin' don't bother knockin'!  The Longbox Junk Halloween Horror 2022 party is still going on, and you're invited!  It's that time of year when I pack this blog FULL of spooky comic book fun, so let's get to it!
Okay. . .
I've reviewed a few Zenescope comics and haven't been very impressed.  In response, I've gotten several private messages from readers (after my recent review of the 2019 Halloween Special) telling me that I'm being a bit unfair by coming into the reviews with some preconceived notions.
But to BE fair, those preconceived notions of Zenescope in general being a comic company in the business of selling sexy comic COVERS without much effort going to the pages in between have borne the bitter fruit of truth once I actually dig into the comics.  Sometimes the truth sucks.  I'm not going to try and sugar coat a rotten apple.
THAT SAID. . .
I'm going to give Zenescope another chance.  The same readers who gently chastised me for coming into the reviews with preconceived notions have informed me that the 13 issue 2015 - 2016 Grimm Tales of Terror Volume upped the quality of writing and art to something I might appreciate a bit more.
With that in mind, I stopped at the comic shop Wednesday to get my pull and decided to check the back issue bins for some of that Grimm Tales of Terror volume.  The comic at hand is the only one they had. It cost me 5 bucks, so I had grit my teeth through the ordeal of paying cover price for a comic from 2016, but I somehow managed to survive.  The things I do for my Longbox Junk readers!
Ready? Let's do it! 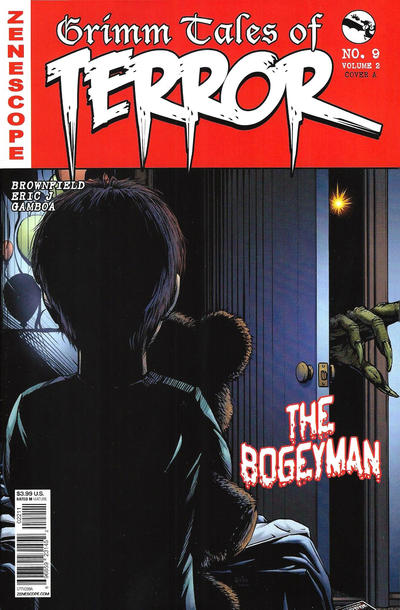 COVER: Eric J
THE COVER:
Wait. What? *checks cover* Yep. . .this IS a Zenescope comic.  But where's the sexy?  This comic has 3 covers, and only ONE of them has a sexy girl on it?  Unheard of! Harrumph!  *adjusts monocle*
ANYWAY. . .I like it!  It's not the greatest comic cover I've ever seen, but it's nicely drawn, and I'd definitely hang this one on the rotating "Wall O' Covers".  The title takes up a lot of space that could be used for art, but other than that this is a nice, spooky Halloween cover.  It has a creepy vibe to it that makes me want to get inside and see what this story is about.  So, let's do that!
THE BOGEYMAN
SCRIPT:  Joe Brusha, Ralph Tedesco & Troy Brownfield
PENCILS: Eric J
INKS: Eric J
THE STORY:
When young Ben begins constantly waking up screaming in the night, his parents are concerned but frustrated.  They think Ben just needs attention, but he knows better.  A voice talks to him from the closet, taunting him and tormenting him. . . 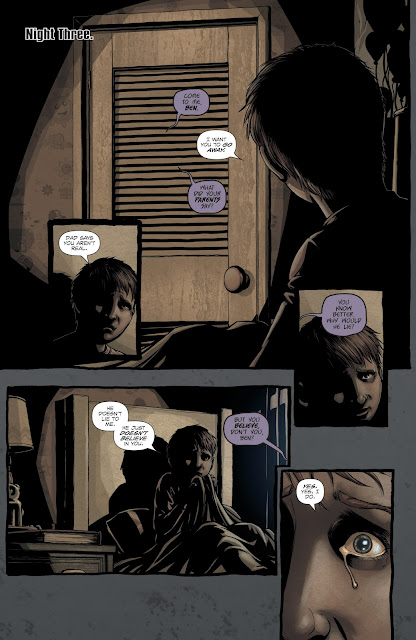 As the nights go on, Ben is tortured by horrific dreams of blood and death.  As he wakes screaming, the voice continues to taunt him.  Finally, his parents decide he needs professional help. . . 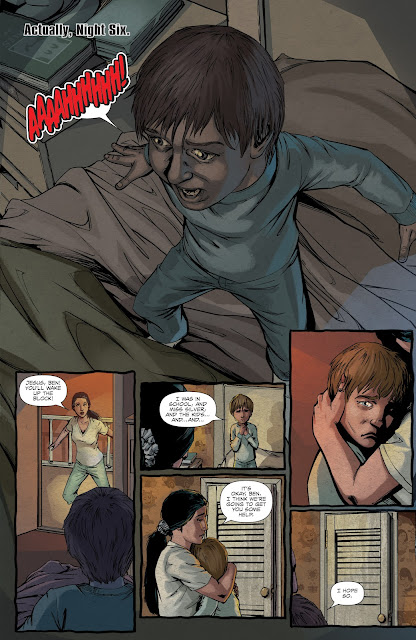 The child therapist tries to help Ben, but he knows the truth. . .there IS something in his closet that wants him to do something terrible. The adults don't understand and don't believe him. 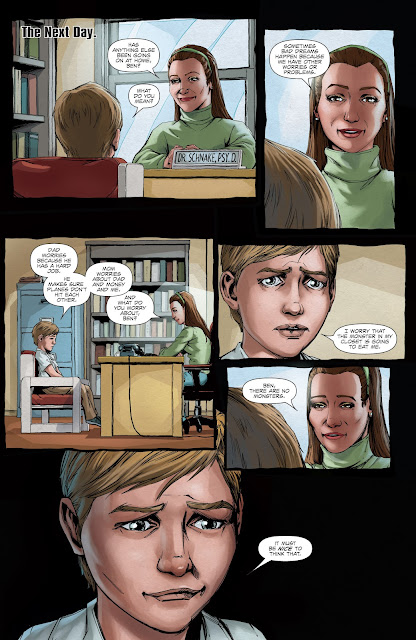 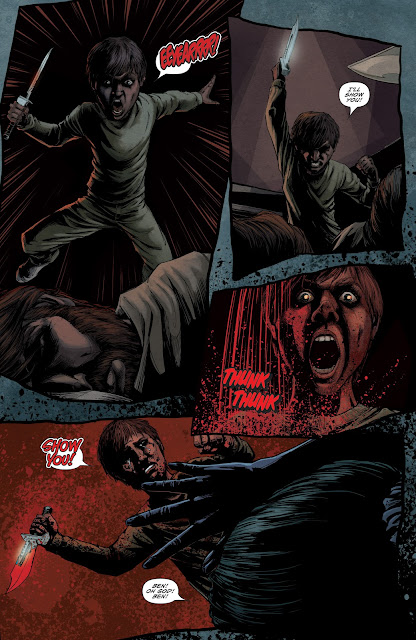 After the deed is done, the voice from the closet finally reveals itself. . .a twisted, ancient creature that beckons Ben to join it.  As Ben follows the creature into the closet, he sees an army of twisted monster children inside.  He has become one of them. 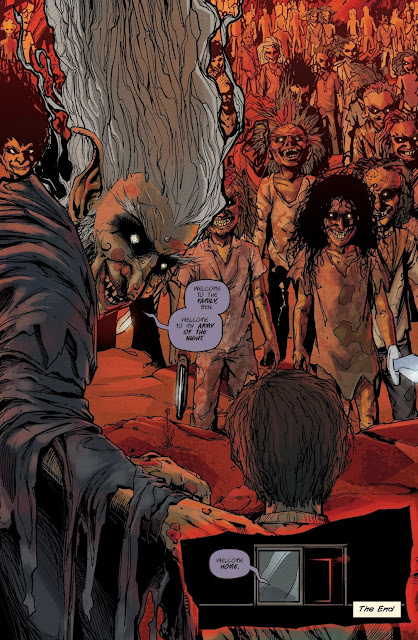 The End.
THE REVIEW:
Okay then.  There it is.  Grimm Tales of Terror #9. . .The Bogeyman.  Let's break it on down!
I liked it!  It's an extremely simple story, but it's well-written and hooked me in until the last page.  This little story of a boy being tortured into slaughtering his parents by a mysterious voice from the closet taps into a creepy place that makes it memorable and engaging despite being extremely straightforward.  This story starts out on an inevitable path and travels to the end without a bit of deviation.  Is it the best horror story I've ever read? Not even close.  But it IS a good one.
On the art side of things, as promised by my readers, this is some of the best art I've seen in a Zenescope book yet.  Like the writing, it's not the BEST art I've ever seen, but it's pretty darn good.  It gives the story a dark and creepy feel, with effective use of dark shadows and bold lines.  It falls apart a bit during the scenes set in daylight, but this is a story about things that whisper in the night, so of course there's more of a focus on those scenes.

Overall, I liked this one quite a bit.  I say "thanks" to the readers who pointed me in this direction, because they were right.  Zenescope CAN do comics without crappy art and stories that seem like thoughtless filler to pad the space under a sexy cover.  This one was actually pretty good.
Is it the best comic book horror story I've read?  I've read better. . .but this IS a simple, creepy exploration of the Bogeyman in the closet trope, backed up by some good art that really drives home the dark and shadowy motif of the tale.
I feel I can safely recommend this little one-shot horror story to any fan of horror comics reading this.  I'm not sure about the rest of the series, but I know I'm going to keep my eye out for more issues so I can find out!
For once, Zenescope is a Longbox Junk winner!
Up Next. . .
This party ain't over yet!  MORE Longbox Junk Halloween Horror fun is on the way!
Be there or be square.
- read more
1 2 3 4 5 6...33 Previous >>