Welcome to Longbox Junk, the blog absolutely STUFFED with comic reviews nobody asked me to write!

The 2022 Halloween Horror party has been going pretty strong so far, so how about we crank up the Longbox Junk time machine for another trip back to the Bronze Age?
This time out, we'll be taking a look at the second issue of an extremely short-lived (3 issues) DC anthology series from 1975. . .Tales of Ghost Castle!
Everybody ready?  Make sure your safety belt is fastened and all belongings are securely stowed beneath your seat.  Please put on the goggles provided for your safety.
*Grasps gigantic lever with both hands and yanks it down*
LET'S GOOOOOOOOOOO!! 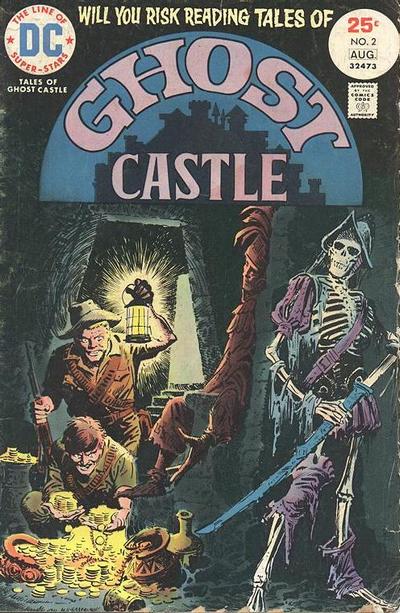 COVER: Luis Dominguez
THE COVER:
I like this one a lot!  It's dark and moody, it tells a story that I want to know more about.  I can definitely see some Joe Kubert influence in the art, and in MY book, that's a good thing.  I really like the giant and pretty unusual title dominating the top of the cover.  This one is a Bronze Age winner!
Let's get inside and see what's going on, shall we? WE SHALL!
THE STORIES:
Three stories in here for your 1975 quarter.  You don't get value like THAT anymore.  You're lucky to get ONE story for five bucks these days.  Actually, more likely you'll get the first fragment of a story that's going to take 12 issues to finish up.  But enough of THAT. . .let's check out what we've got here.
SNAKE-EYES
SCRIPT: Robert Kanigher
PENCILS: E.R. Cruz
INKS: E.R. Cruz
One night, a lab worker that enjoys torturing snakes is bitten by a deadly Bushmaster. She takes an untested experimental anti-venom formula.  It saves her, but somehow turns her into a snake!  When she is discovered, she is unable to speak and save herself from being thrown into the venomous snake pit along with the hated snakes she tormented. 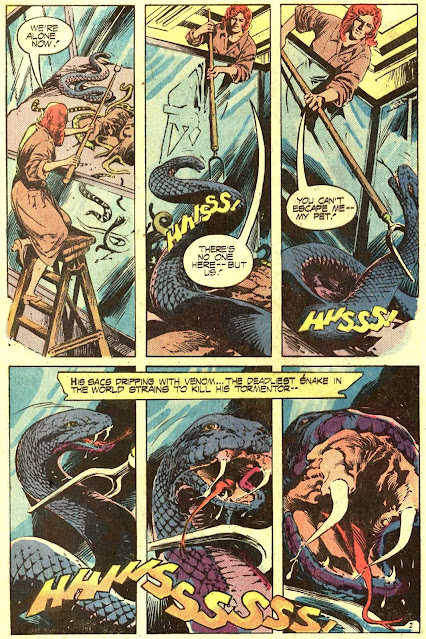 THE REVIEW:
A pretty good story of the time-honored "You have become that which you hate the most" story path. The short tale hangs on an overly worn framework, but Kanigher does a good job with it.  But what REALLY puts this story a notch above the ordinary is the art!  If you don't like snakes, then the art on this story will crawl up your spine and hiss at you!  Just LOOK at the page I scanned above.  The snake-tastic art in this story definitely delivers the creep factor!
A good start.  Let's see what's next!
THE INHERITORS
SCRIPT:  Jack Oleck
PENCILS: Alex Nino
INKS: Alex Nino
2000 years after Planet Earth was abandoned as a radioactive wasteland following a devastating worldwide nuclear war, humans return to their home planet for the first time.
The explorers quickly discover that Earth is now clear of radiation but is inhabited by brutal savages. . .humans that did not escape and were mutated.  After losing several men, the Captain of the starship decides that the only way for humans to reclaim their world is to completely eliminate the half-human savages.
Once the deed is done, the crew celebrates with a swim in Earth's clean waters. . .revealing that they are themselves scaly mutants and hardly human at all. 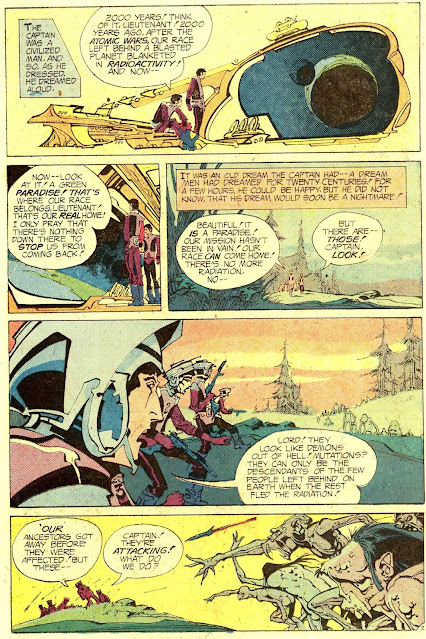 THE REVIEW:
Another tale that hangs on a pretty worn story hook. . .this time of the "You're no different than those you hate" category.  But classics are classics for a reason, and this is a well-written story.  But like the first offering in this issue, it's the art that really brings this short story up to a higher level.  The hyper-stylized look of the art REALLY stands out in a bold way.  It's unusual and memorable and I'm definitely interested in finding more work from Alex Nino to enjoy.
Two for two! Hopefully, the last story can keep up the quality.  Let's bring it on home!
THE FATE OF THE FORTUNE-HUNTER
SCRIPT: Mal Warwick
PENCILS: Ruben Yandoc
INKS: Ruben Yandoc
Two ruthless mercenaries on the trail of a fortune in hidden Inca gold blaze a trail of blood across South America until they finally find an old man and his grandson who claim to know where the treasure is and will guide the fortune hunters to it in exchange for a halt to their violence.
As they travel, the old man angers the mercenaries and they kill him in cold blood.  They follow his grandson to an ancient mine, pursuing him into its depths until they are taken captive and brought before the Prince of a mysterious tribe. . .the old man's grandson.
He sentences the mercenaries to a lifetime of labor in the gold mine they were so eager to find. 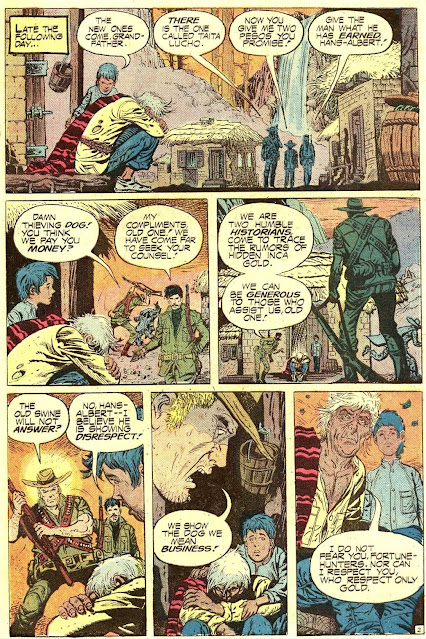 And we finish off this issue with a tale following yet another well-worn story path, this time it's "Your greed earned you a fate worse than death".  But like the first two stories, it's well written and engaging. The ending of the story actually took me by surprise!  And ALSO like the other two stories in the issue, the art is the real star of the show!  The art in this story is just FULL of fine detail and a feeling of motion that really brings life to the narrative.

Three stories. . .three winners!  Not a bad one in the bunch.  What more could a comic fan ask for?
The three stories in this issue are all hanging on classic, one might say overused, story hooks, but the writers do a great job of keeping them interesting and very readable, even 47 years down the road.
But even though the stories are enjoyable, the REAL hook for me in this issue was the art!  From the cover to the last page, this comic is PACKED with fantastic Bronze Age art that really brings these stories up to a higher level than you would think a trio of Twilight Zone-style twist ending tales would rise to.
Overall, this comic is a grand slam winner!  It's rare I can't find ANYTHING to criticize in a comic, but this is one of those times.  From end to end, Tales of Ghost Castle #2 is entertaining and enjoyable, and I highly recommend it to any fans of classic comic anthology horror/ suspense titles.
Up Next. . .
Keepin' the Longbox Junk Halloween Horror party going with MORE spooky fun!
Be there or be square.
- read more
1 2 3 4 5 6...33 Previous >>