Welcome to Longbox Junk, the place to find a bunch of comic reviews you never asked for!

It's October! The scent of pumpkin spice is everywhere and it's that time of year when Longbox Junk heads to the spooky side of comics for a little Halloween Horror fun!
This time out, I'm cranking up the Longbox Junk time machine for a trip back to 1978 and a look under the fantastic cover of the second issue of a short-lived DC anthology series starring the one and only Madame Xanadu.
Ready? Let's do this! 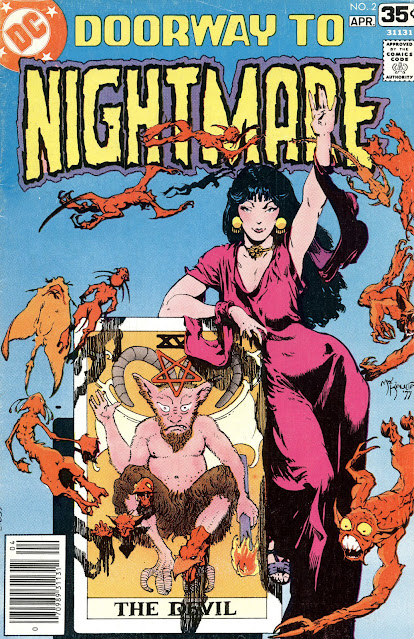 COVER: Michael Wm. Kaluta
DOORWAY TO NIGHTMARE
SCRIPT: Gerry Conway
PENCILS: Vicente Alcazar
INKS: Vicente Alcazar
THE COVER:
Now THAT'S a fine cover!  I mean. . .just LOOK at it!  Kaluta is one of my favorite Bronze Age artists and he definitely knocked this one right out of the park.  The detail, the composition, the colors, the shading on Xanadu's dress. . .and all set perfectly against a monochromatic background.  I LOVE this cover and it's one of the favorites in my comic collection. It's just a beautiful piece of art.
THE STORY:
After physicist Melissa Mann gets a warning about the danger of pursuing science that she shouldn't from the mysterious fortune teller Madame Xanadu, she ignores the warning and throws herself even more into the research project she shares with another physicist, Nobel Prize-winning Doctor Hampton Hill.  Believing Xanadu's message to be an attempt to make her quit her work by her boyfriend, artist Douglas Holt, she distances herself from him. 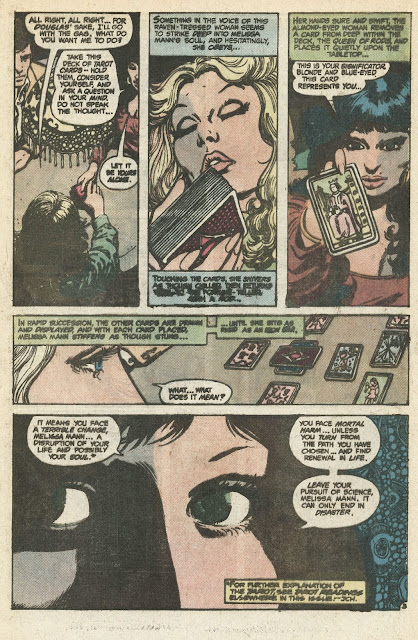 Doctors Mann and Hill are working on Project Doorway.  An ambitious undertaking to use science to breach the barriers of time and space in order to open a doorway into another dimension.  But when they finally activate the device, the scientists are horrified to discover that the dimension beyond the doorway is full of twisted, demonic creatures rushing toward the opening!
Luckily for them, Douglas was nearby, having taken Xanadu's warning seriously.  He rushes into the lab and smashes the machine, closing the dimensional doorway just in time. . .or so he thought! 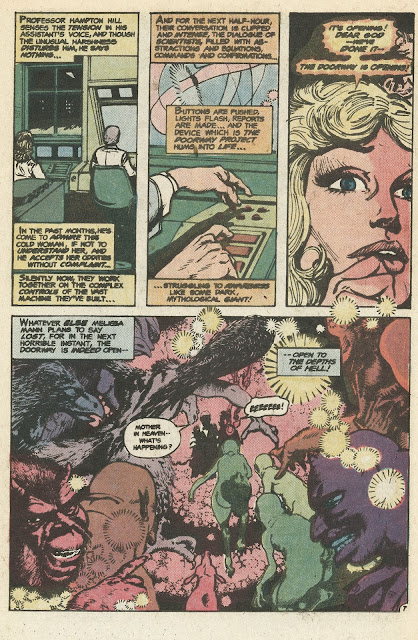 In the days that follow, Melissa undergoes a terrifying change.  From shy and quiet scientist, she becomes lusty and violent.  Finally, she becomes so out of control that Douglas and Doctor Hampton have her committed to the psychiatric ward at Bellvue Hospital.
The doctors at Bellvue are unable to determine the cause of Melissa's strange, violent behavior.  The distraught Douglas returns in desperation to Madame Xanadu, who informs him that Melissa has become possessed by a creature from beyond the doorway!
Reluctantly, Douglas agrees to help Xanadu perform an exorcism.  The supernatural ritual works, drawing a horrific creature out of the body of Melissa.  As it rushes to possess Douglas, Xanadu manages to capture the being in an arcane crystal. 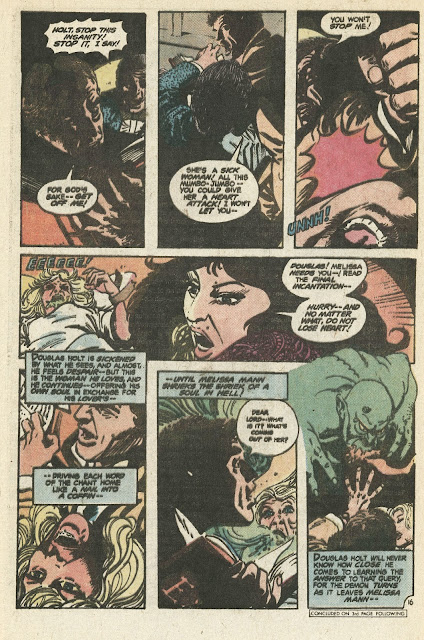 In the end, Melissa is freed of the demonic presence, but witnessing the exorcism and the creature that came out of her was too much for Doctor Hampton.  His mind snaps and the brilliant scientist is fated to remain a patient at Bellvue.
The End.
THE REVIEW:
What we have here is a modern comic re-imagining of the 1934 H.P. Lovecraft story "From Beyond".  A story that combines science and the supernatural with the idea that there is a horrific dimension just out of our sight with creatures trying to find a way into ours.  It's a classic story that has stood the test of time through many different re-imaginings in various media and it works very nicely here in comic book form.
Gerry Conway is in fine form here, providing a chilling tale of science gone wrong with a supernatural twist.  The story is almost 45 years old and it still reads well.  There's a timeless quality and feel to this story that I really appreciate.  It's a simple story and Conway keeps it simple.  That's what makes it good.
On the art side, Vicente Alcazar does a fine job, with dark shadows and bold lines dominating the pages (He inked his own pencils here) and giving this tale a moody, almost gothic look.  I know Alcazar's work more for his run on Jonah Hex, so it was a surprise and treat to see something else from him.

The combination of dark, striking artwork and good writing on a straightforward story that stands the test of time make this 1970s re-imagining of a classic Lovecraft tale worth a read for any fan of horror comics!
Up Next. . .
MORE Longbox Junk Halloween Horror fun!
Be there or be square!
- read more
1 2 3 4 5 6...32 Previous >>