Welcome to Longbox Junk!  It's the blog packed FULL of comic book reviews nobody asked me to write!

Digging through bargain bins as much as I do, sometimes I can't help but be a little overwhelmed by the sheer number of unloved and unwanted comic books out there.  It seems that if a comic doesn't have "value" to collectors. . .the possibility of being "worth" some money, then the comic doesn't have any value at all!
Sometimes I wonder why THIS comic ends up in the bargain bin and THAT comic doesn't.  I've reviewed comics with high collector "value" that are pretty underwhelming.  On the other hand, I've reviewed comics "worth" cover price (if that) that have been really enjoyable.
Which brings us to the comic at hand.  It's the first issue of a short-lived series that seems to have been mostly-forgotten.  It introduces a new character to the DC roster, has an excellent creative team behind it, and was put on the stands by one of the biggest comic publishers in the world.  So why can a diligent Longbox Junker find every issue of this series by digging through bargain bins?
Let's take a look and see if we can find out, shall we?  We shall! 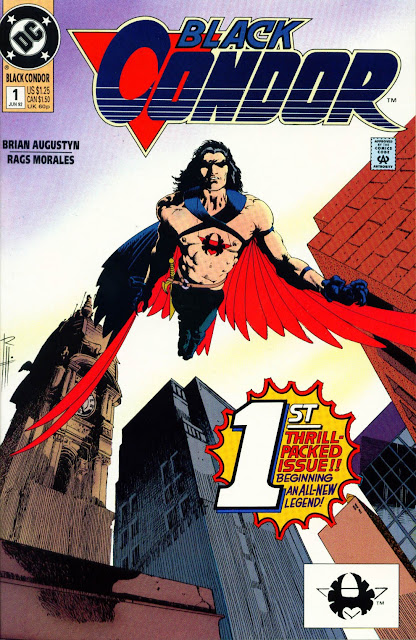 A DREAM OF FLYING
SCRIPT: Brian Augustyn
PENCILS: Rags Morales
INKS: Rags Morales
COVER: Rags Morales
THE COVER:
Okay, not a bad cover at all.  I like it!  It's basically just a nicely-done character portrait, but I like the design of Black Condor, the heavy inks, and the logo is just really great.  The "First Issue" badge is a little intrusive, but that doesn't keep this from being a very solid and eye-catching cover that makes me want to read this comic.  Let's get inside!
THE STORY:
We begin our tale with a short one page prologue.  We are introduced to a young man named Ryan, who seems to be the willing participant in an experiment taking place at the direction of Ryan's Grandfather.  The experiment is being done by a mysterious "Society" and has been in preparation for years.  The purpose of the experiment is to make Ryan fly. . . 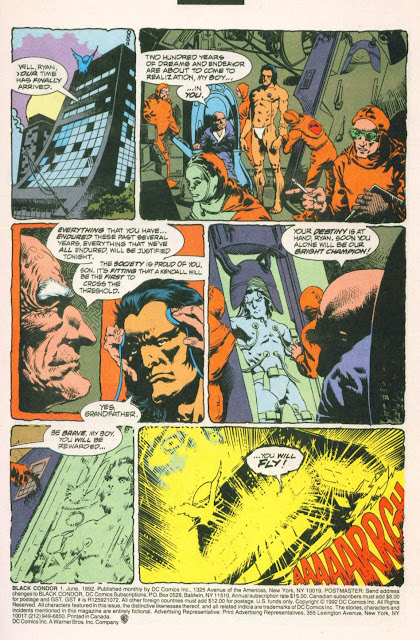 We move forward a bit and see that the experiment was successful. Ryan is flying over the lush forest of the New Jersey Pine Barrens.  He reflects on the great gift he has been given, but we learn that at some point, Ryan became disillusioned with his Grandfather's secret society and he abandoned them.  Further, he plans to destroy them. . . 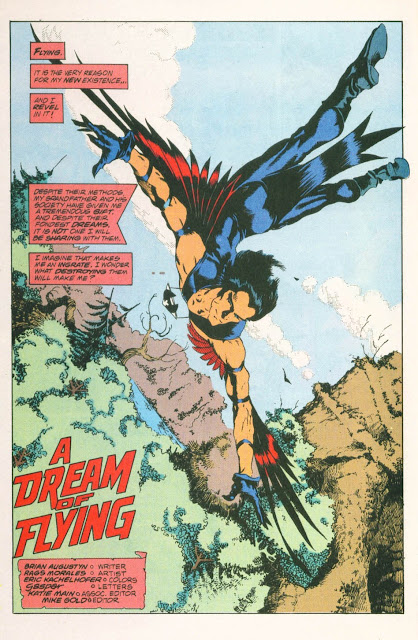 After being introduced to our hero, we shift focus to a gang of outlaws on the run.  They've just pulled off a payroll robbery and have eluded the police, but they don't get along, and as they argue with each other they wreck their van while speeding through the Pine Barrens. . . 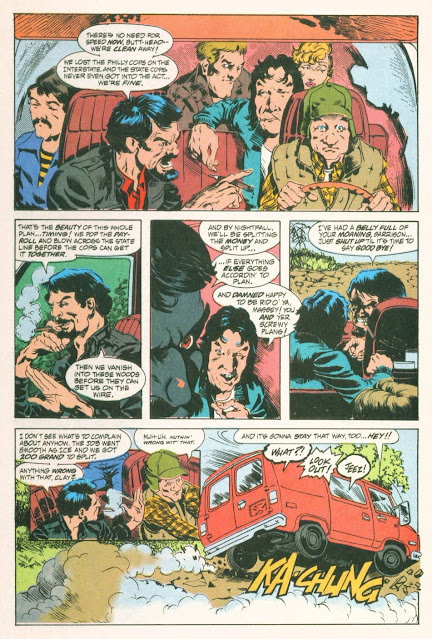 A Park Ranger spots the wreck and offers assistance, only to be taken hostage by the gang as they hijack his truck to continue their getaway. . . 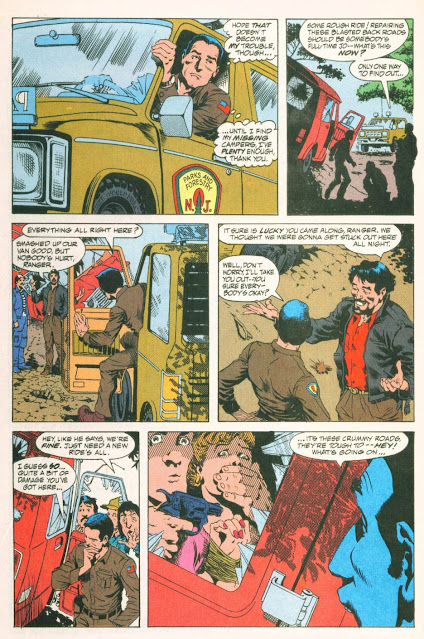 IN THE MEANTIME. . .
Ryan (AKA Black Condor) senses trouble below, and using the heightened senses that were part of the "gift" of his Grandfather's experiment, he comes to the rescue of two lost hikers. . . 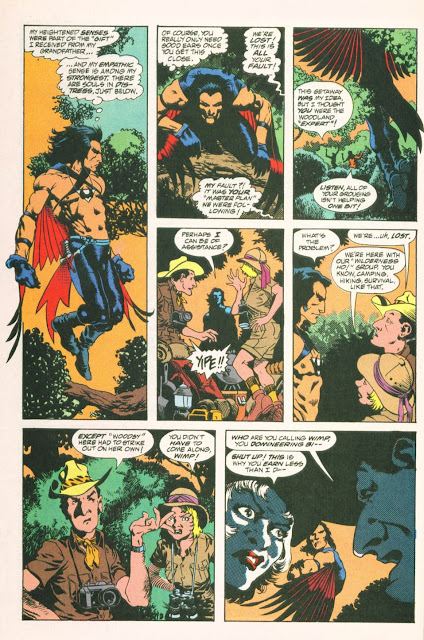 But when he goes to the Ranger station to report his rescue of the hikers, he discovers that his best friend, Ned (the head Ranger), has gone missing. Condor immediately senses something is wrong. . . MEANWHILE. . .
The escaped criminals find themselves stranded in the thick forest of the Barrens when the truck they hijacked runs out of gas.  The stress of constant setbacks breaks the gang down to the point where some of them just want to take their cut and make their own way.  Enraged, the gang's leader guns one of them down in cold blood! 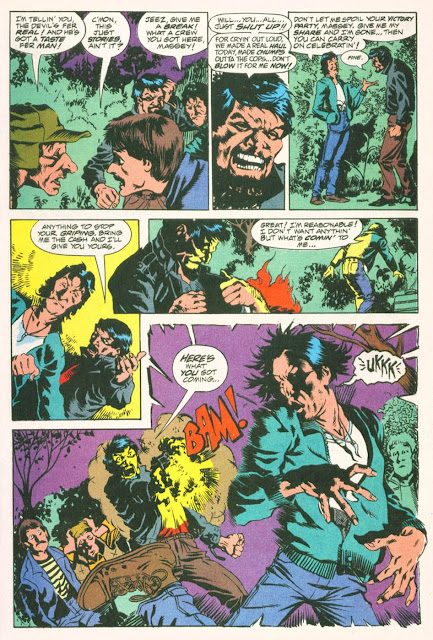 In the skies above the Barrens, Black Condor is searching for his missing friend.  He reflects that it was Ned who showed him that he didn't have to live up to the destiny that his Grandfather had wanted him to, and that he owed his life as a free man to the kind Ranger.  Suddenly, he hears gunshots! 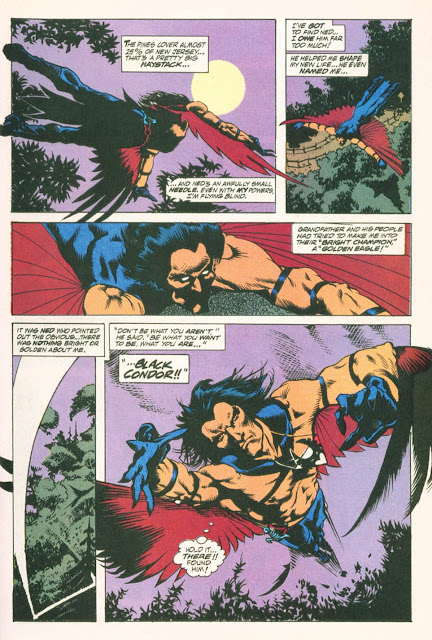 Below, the cold-blooded killing of one of the gang members throws the rest into panic.  The leader orders one of the others to kill their hostages so they can head through the forest on foot.  When he refuses, the leader guns him down as well.
Black Condor arrives on the scene in time to witness the second killing.  Condor uses his mental powers to control the mind of the gang leader, keeping him from shooting again. . . 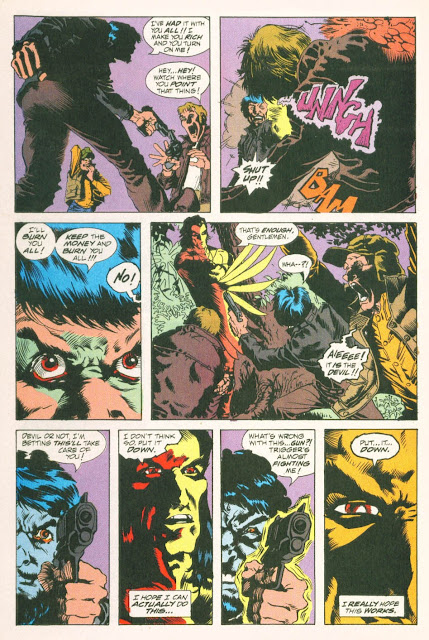 A short fight later, and it's over.  Condor saves the hostages and it's not long before the police arrive on the scene and arrest the remaining gang members. . . 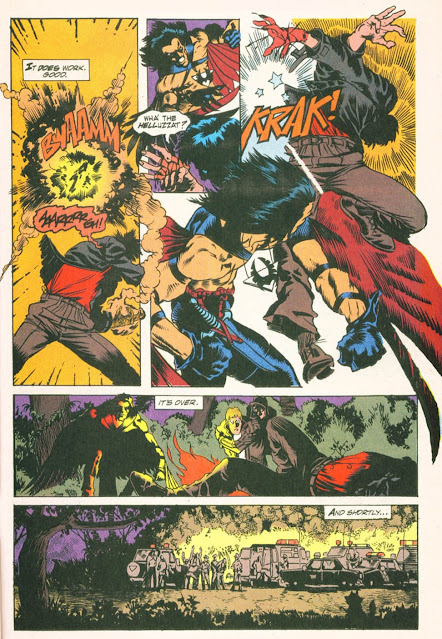 Ned expresses his gratitude to Condor for saving him, as well as his astonishment at Condor's increasing powers.  Condor admits that there's still a lot he doesn't understand about the powers his Grandfather's experiment gave him.  Condor clears out before the reporters arrive and all's well that ends well.
BUT WAIT!
In a short epilogue the following day, reports of fugitives captured by a flying man reach Ryan's Grandfather.  He immediately sets into motion some sort of plan that surely can't be good! 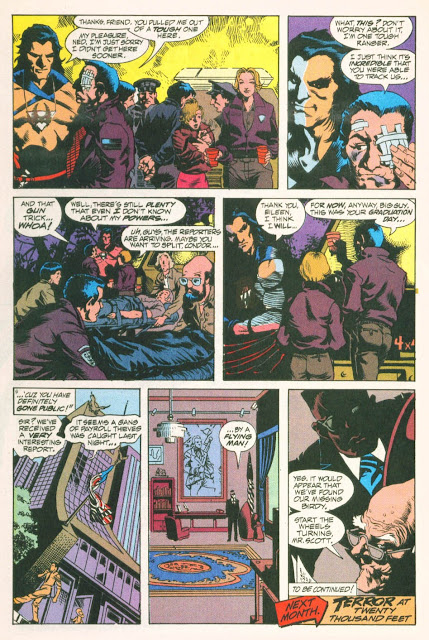 The End. . .To be continued.
THE REVIEW:
All righty, then.  There you have it.  Black Condor issue #1.  Let's break it on down!
When I read the first issue of a series, I look for TWO things:  Does it introduce characters and their situation in a new reader-friendly way?  Does it tell a story that I want to read more of?
Is that really too much to ask for?  I think it's actually a pretty low bar, but for some reason, it seems that a lot of first issues somehow manage to fail at one or both of those two little things.
Fortunately, Black Condor #1 hits both of the marks very nicely.  We're introduced to Black Condor, his supporting cast, his situation, and his antagonists in a well-written and engaging way that gives JUST enough information to let us know that there's still more to come. . .which makes me want to get right into the next issue!
The story itself is extremely simple.  Basically, Black Condor rescues his friend from a gang of criminals that have taken him hostage.  But the simplicity of the story is one of its strengths.  Within the admittedly bare bones narrative there's plenty of room to make that new reader-friendly introduction I find important in a first issue.  Brian Augustyn does a great job in writing what is pretty much a fast-paced one shot story introducing his new character in a way that I want to read more.
On the art side of things, Rags Morales' unique style is what really makes this issue shine!  It's exaggerated, but detailed, with dark inks, great colors, and a lot of attention to facial expression.  I'm more familiar with Morales' more recent work (such as Identity Crisis), but I've discovered here that I enjoy his earlier style much more.
Overall, this is all I could want from a good first issue of a comic series!  Very nicely done.

In my introduction to this review, I wondered why this series and this character are all but forgotten.  To be fair, Black Condor DID outlive these 12 issues in guest appearances (Mostly in The Ray and Starman) and as a member of mostly-forgotten superhero team Primal Force, as well as a few other appearances here and there until his death in DC's Final Crisis event (Later to be briefly resurrected as a Black Lantern).  But despite these appearances, there just didn't seem to be much interest in Black Condor.
This first issue is a well-written introduction with some great art.  The rest of the issues of this series managed to keep the same creative team on board, so the writing and art are consistent and very solid through the whole run, yet Black Condor could only carry 12 solo issues before being relegated to a supporting character role in other titles.
Maybe some characters just do better as supporting cast? I've seen other characters that seem to have this same "problem".  Black Canary is one that jumps immediately to mind.  She's a great supporting character that has problems carrying a solo series.
That's really the only good reason I can think of to explain the relative obscurity of Black Condor. Maybe he just got caught up in the overwhelming glut of 90's comics? That was probably part of it as well. Whatever the reason might be, I found Black Condor to be an interesting character that deserved a bit more attention than what he got.
Overall, I can definitely recommend Black Condor to anyone looking for a good, solid superhero story with some interesting angles (he's not really interested in being a superhero) and some great art to back it up.  This first issue is a good introduction, but the whole series is worth a look.
Black Condor has never been collected (and I don't see it on ComiXology) so if you want to check it out, you'll need to hunt down the individual issues.  Fortunately, they seem to be pretty easy to find in back issue/bargain bins. . .which is where I've found 11 of the 12 issues.  Give Black Condor a try if you should spot one while out Longbox Junkin'!
Up Next. . .
Let's take a look at one of the most obscure characters to come out of Rob Liefeld's Extreme Studios during Image's "We Wanna Be Marvel!" superhero days.  I'm talking about BLINDSIDE!
Be there or be square.
- read more
1 2 3 4 5 6...30 Previous >>