Welcome to Longbox Junk, where the comics are cheap and the reviews are free!
October has passed and here we are in November already!  I didn't get quite as many entries for the 2021 Longbox Junk Halloween Horror Party in as I would have liked to, but I still had a lot of fun spotlighting some of the new horror comics on the stands.
But now it's time to get back into the bargain bins!
Before getting into Halloween mode, I was taking a look at some of the comics that you're practically guaranteed to find in just about any bargain bin you might happen to be digging through.  Let's continue on with that, shall we?  We shall!
The comic at hand is the first issue of another one of Image's early "We wanna be Marvel!" series.  Actually, it's from one of their FIRST series that they put out, and one of the original "hot" titles that grabbed public attention and pretty much got the ball rolling for Image in their early years.
WildC.A.T.s was founding Image partner and superstar artist Jim Lee's first creator owned project, and when it hit the stands it was HUGE.  A quick bit of internet research tells me that wholesale sales to retailers for this first issue were right up there at about ONE MILLION COPIES!
So there were a LOT of copies of the early issues of this series sold, which is why you can reliably find them in just about any bargain bin you might be Longbox Junkin' and cheap comic spelunkin' in.  But now the question becomes: Is this ubiquitous relic of the 90's comic boom any good?
Let's find out! 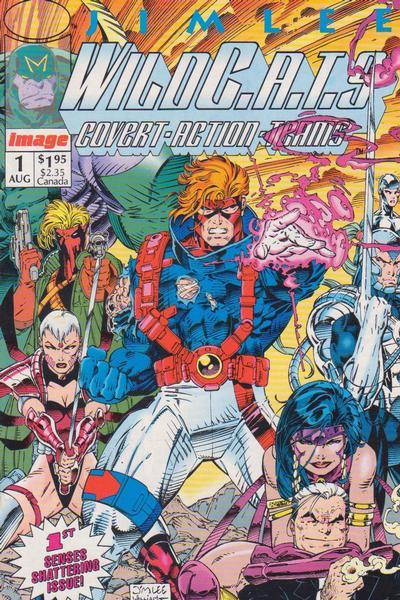 RESURRECTION DAY
SCRIPT: Jim Lee & Brandon Choi
PENCILS: Jim Lee
INKS: Scott Williams
COVER: Jim Lee & Scott Williams
THE COVER:
It's a little busy in that special 90's-tastic way, but I like it!  The bright colors pop, it's nicely drawn, and it really catches the eye.  It's just a good, classic team hero pose cover.  Nothing spectacular, but it's definitely worthy of a turn up on the "Wall O' Covers" in my office at work now and then. . .but now that I think of it,  Zealot's outfit IS a little too skimpy for the workplace, so probably not.  Still a solid cover, overall.  Let's get inside!
THE STORY:
We begin our tale with several flashback scenes as a mysterious woman seems to be travelling through time searching for someone. . . 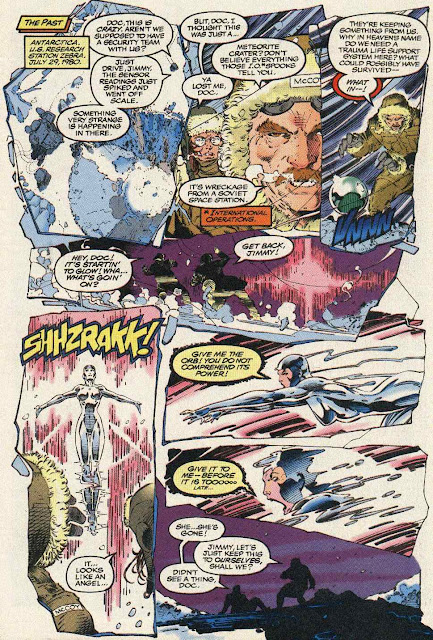 We follow her to the 1990's, where she rescues a homeless man named Jacob Marlowe from an attack.  We learn that she calls herself Void and that Marlowe is actually "Lord Emp", one of the four Lords of Power, belonging to an alien race known as the Kherubim, and the Champion of Mankind!  She tells him that she's been sent to find him in order to prepare for a coming war. 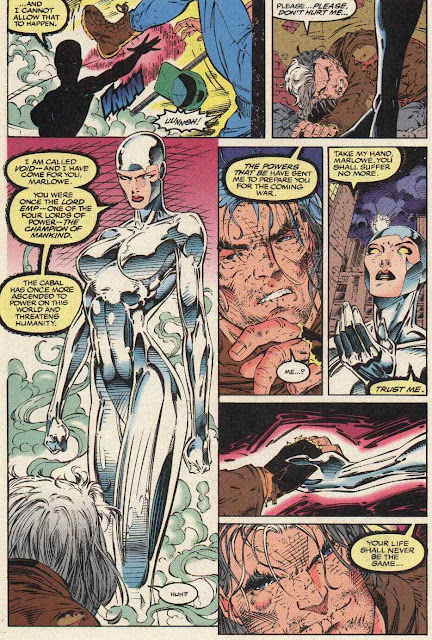 Flashing forward a few years and find that the formerly homeless Marlowe is now a multi-billionaire at the head of the international Halo Corporation.  He seems to be reluctant to accept his role as hero and champion of the human race in an upcoming war, but Void insists that preparations continue to be made. . . 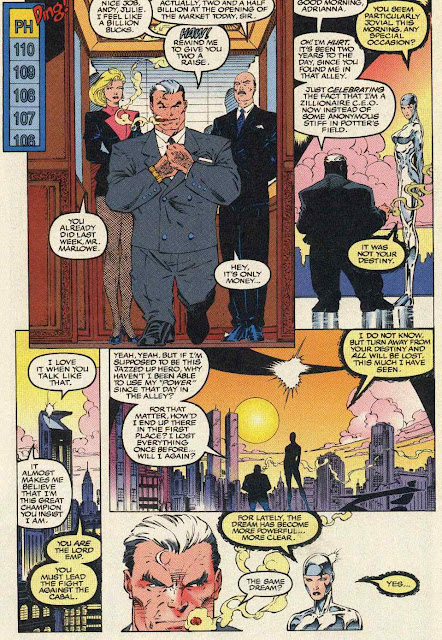 To prepare for the upcoming battle, Marlowe and Void have been gathering a group of "gifted" warriors with superhuman abilities.  We are introduced to several of them, including team leader "Spartan", a highly-advanced android almost indistinguishable from a human, "Warblade", a hybrid human/alien able to transform his body like liquid metal, and "Maul", another human/alien hybrid able to increase and decrease his body mass, with his intelligence going down as his mass goes up, and likewise his intelligence increasing as he becomes smaller. 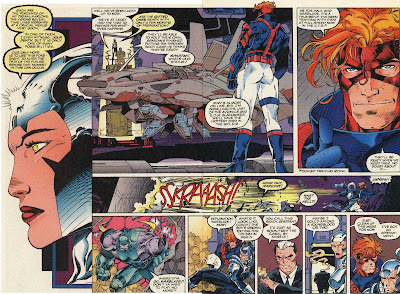 IN THE MEANTIME. . .
Moving away from Marlowe and his team, we look in on their opposition, the Cabal.  Led by an alien being known as Helspont (a member of a race called Daemonites) and based aboard a gigantic hidden submarine, they are also gathering warriors for the upcoming battle.   They have discovered a new "gifted" being and are determined to get to her first before their Kherubim enemies. . . 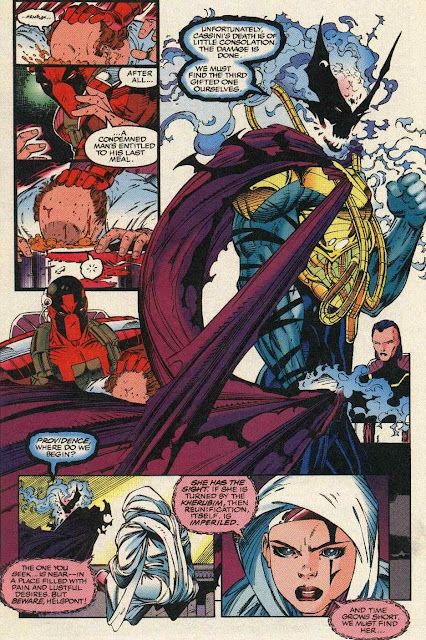 ELSEWHERE. . .
We follow a mysterious man into a strip club, where a dancer is attacked by a group of men who are revealed to actually be alien Daemonites when we learn that the dancer, "Voodoo" can see them for who they truly are. 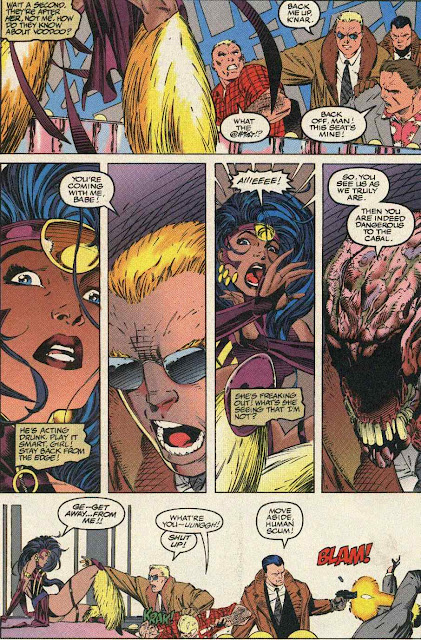 Luckily for her, the mysterious man we were following at first turns out to be a Kherubim agent. Called "Grifter", he is a supernaturally-gifted marksman and hand to hand fighter.  He's there to find Voodoo, but his partner is nowhere to be found.  He leaps into the battle as the Daemonites drop their disguises and begin killing everyone in sight! 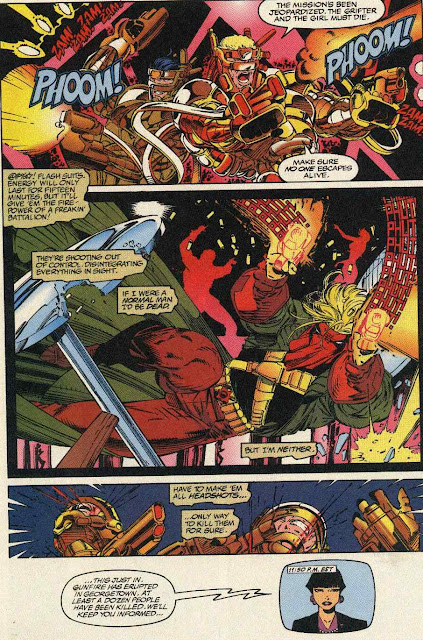 As the battle continues and casualties mount, Marlowe sees news reports about what's happening.  He and his team move swiftly to the scene and join in the fight! 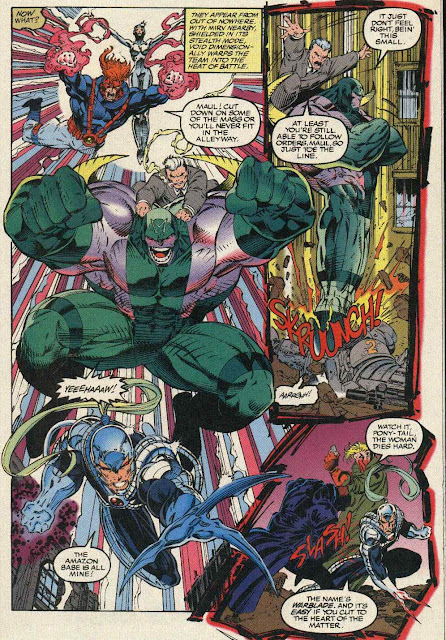 Even with the extra firepower, the Kherubim agents are faced with a brutal battle, but when Grifter's missing partner, the warrior known as "Sister Zealot", a highly-skilled Kherubim assassin/monk from a secret society known as the "Coda", finally arrives, the battle against the Daemonites is ended in short order. 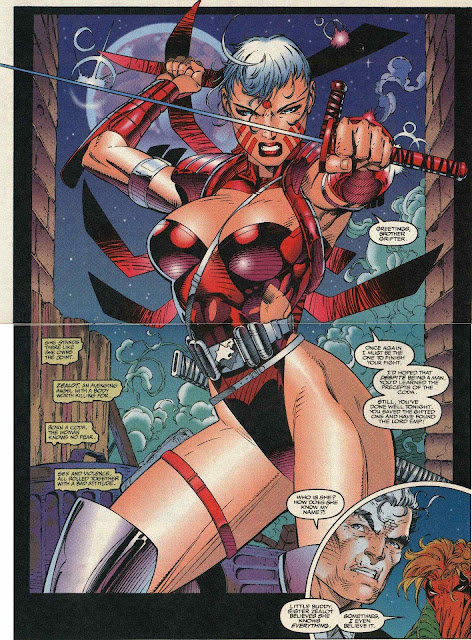 After the battle, Zealot introduces herself to Marlowe and informs him that they are also Kherubim and have the same goals in protecting Voodoo.  Marlowe invites Zealot and Grifter to his Halo base so that they can further confer on what to do next.  But as they talk, a surviving Daemonite detonates an explosive, destroying the strip club!
At the end, with Voodoo and her Kherubim protectors seemingly dead, we see Helspont making plans with one his Daemonite agents. . .Vice President of the United States, Dan Quayle!  DUN-DUN-DUUUUUUNN!! 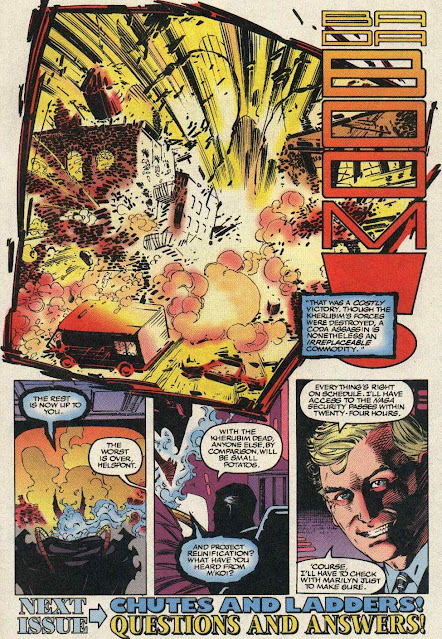 To be continued. . .
THE REVIEW:
Allrighty, then. . .let's break it on down!
There are a few things that I expect the first issue of a comic series to provide.  A bare minimum bar of expectations that I don't think are too much to ask in return for considering giving a company my money for their comics on a monthly basis.  This series is long completed, but it's new to ME, so I hold it to the same standard as any other first issue.
FIRST. . .Does it introduce new characters and their situation in an easy to understand manner?  Weeeeeeell. . .sorta.  This isn't really a great introduction to these characters and what's happening.  It's not terrible, but things are just thrown at the reader one after the other with very little explanation.
In 2021, I have the advantage of going to Wikipedia and seeing that this story is about a  centuries-long war between two alien races, the Kherubim. . .a nearly immortal race that resemble humans and have a variety of exceptional powers and skills, and the Daemonites. . .a hideous-appearing race whose main powers are possession and mind control of other beings.
Unfortunately for readers in 1992, the internet wasn't quite what it is today and the reader of this comic was sort of on their own to pick out the story between the lines.  It jumps around and it's kind of hard to see how the pieces fit together.
SECOND. . .Does it make me want to read the next issue?  Honestly, not really.  This first issue throws so much at the reader that it makes it kind of hard to become invested in any of it.  This comic came out at a time when a series could be driven by the art alone.  It looks like that was exactly what Image was banking on here, because truthfully, the story just isn't that interesting.
Don't get me wrong, it's not a BAD story.  it's just sort of. . .there.  Serving as a framework for Jim Lee's art.  But once you get past the art, what you have is a pretty average story that is shamelessly an "edgy" mix of the X-Men and Avengers in that early Image "We want to be Marvel!" manner.
So this is pretty much a comic built around the art, with the story as an afterthought.  Okay, fair enough, I guess.  So let's talk about the main attraction then.  Jim Lee is a modern comic legend for good reason, and you can see that reason in this comic.
Yeah, there's belts and buckles and pouches galore, in the most 90's-Tastic way.  Yeah, there's impossibly-built women in cheesecake poses meant to appeal to the lowest common male denominator.  But once you get past the 90's excess, you can see TRUE talent shining through on every page of this comic!
Jim Lee gives these pages a feeling of motion and movement, full of detail and action that is definitely the signature look of one of the modern greats.  Where the story falls flat, the art is vibrant and exciting.  I can definitely see why this comic was such a huge hit when it came out.

On the one hand, we have a story that's pretty average.  It doesn't quite reach the bare minimum first issue expectations of introducing new characters and situations in an easy to read and understand manner.  It also fails to hook me into wanting to read the next issue, with characters thrown so quickly into the mix that it's hard to get invested in what happens to any of them.
On the other hand, we have a fantastic example of some great art from one of the great modern artists, Jim Lee.  His pencils are dynamic, vibrant, and interesting once you get past some of the notorious 90's excesses.
Taken together, there's a comic worth reading here.  The story isn't ALL bad, and the art definitely hits some 90's low points here and there.  Overall, it adds up to a decent comic that is still pretty readable even almost 30 years down the road (1992 was almost THIRTY YEARS ago? , I feel old!)
If you're digging through a bargain bin, chances are you WILL spot one of these.  Go ahead, spend a buck and give it a read.  It's not the best 90's comic I've ever read, but it's far from the worst.
Up Next. . .
More of that sweet Longbox Junk that you're practically guaranteed to find!
How about we take a look at something from Marvel's New Universe?
DP7? Justice? Nightmask? Psi-Force? Star Brand?  I've got 'em ALL!
Decisions. . .decisions.
Be there or be square!
- read more
1 2 3 4 5 6...29 Previous >>