To which I can only quote Will 'Wicky, Wicky, Wild Wild West' Smith and say: "Welcome to Earth!"
And on THAT note, let's get some aliens in here!
SPOILER ALERT! This series has been completed, but it's still pretty new, so I'm going to keep the spoilers to a minimum, if you want NO spoilers, just scroll on down to the "Conclusion" for my spoiler-free opinion.  END SPOILER ALERT! 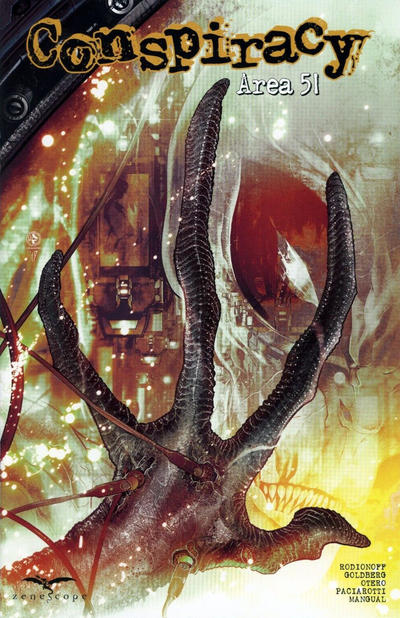 SCRIPT: Joe Brusha, Ralph Tedesco, Dave Franchini, Hans Rodionoff, Adam Goldberg
PENCILS: Allan Otero
COVER: Leonardo Colapietro
THE COVER:
I like it!  It's creepy, nicely painted, and the colors are vaguely unsettling.  It makes me want to buy this comic and see what the story is about. Certainly not what I would expect from Zenescope, who have carved out a niche as the company with 20 variant covers for every issue they put out, each with a different scantily-clad woman on it.  I didn't even realize this WAS a Zenescope comic until I started writing this review!  Extra points for that.  Let's get inside!
THE STORY:
In the aftermath of the failed "Storm Area 51" viral Facebook event of 2019, three friends manage to obtain high level clearance badges to access the secret base through an army friend who works as one of the gate guards.
As the three infiltrate Area 51 using their assumed identities and stolen access badges, they are at first amazed to discover a hanger full of extraterrestrial spacecraft, and then horrified as they delve deeper and find scientists dissecting live humans in a secret laboratory and tanks with what appear to be growing clones inside.
As they try to escape the base, they find and free a man being held prisoner in a medical wing of the laboratory, as the confused man runs for his life, the three friends are gunned down by Area 51 guards.
As the three friends are killed, the man they freed makes his way to an office and manages to get a call through to his house, where a man answers the phone and informs the escaped prisoner that he can't be who he says he is because that's who is speaking.  As the terrified and confused prisoner listens to himself on the phone, he too is killed by an Area 51 guard.
The End. . .To be continued.
THE REVIEW:
A pretty good story!  Lots of potential here, and it makes me really want to hunt down the rest of the issues (5 issues in a regular series and 5 connected one-shots like this one) to get the whole story.
But I'll tell you what I REALLY like about this one.  As I mentioned in my look at the cover above, I didn't even realize this was a Zenescope comic until I sat down to write this review. . .and that's a GOOD thing!
I've never been very impressed with Zenescope as a publisher.  They seem to have carved out a niche for themselves (a pretty successful one, from what I've seen) as the company with comics about sexy girls.  They're the sort of comics that give comics a bad name, and not really the sort of thing you want to admit you're a fan of.  I've never reviewed a Zenescope comic that I've liked yet.  They just seem to reach down to the lowest common young male denominator.
BUT. . .
This is a well-written story that hooked me in and made me want more. . .with nary a T or A to be found!  I would have never thought I'd read a Zenoscope comic that didn't deal in their usual puerile stock in trade, or that I would actually enjoy it so much!  Is Zenescope beginning to grow up a little and step outside the profitable box they created for themselves?  That remains to be seen, but THIS is a pretty decent little story!
As far as the art goes, it's serviceable.  It tells the story, but doesn't try much harder than that.  Pretty much par for the course with Zenescope.  An eye candy cover with minimum effort inside.  The art isn't BAD. . .it just doesn't try that hard to be anything more than "pretty good". 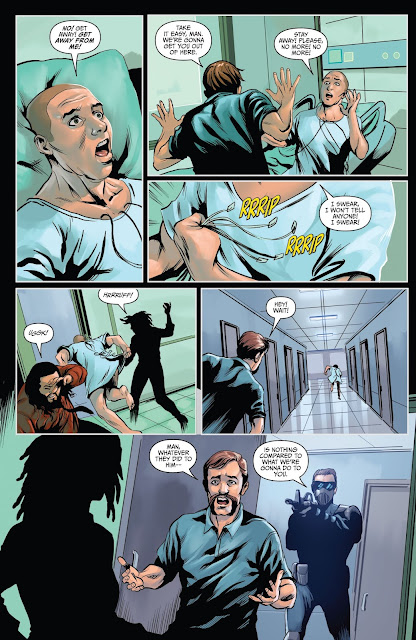 Conspiracy: Area 51 is a creepy story that makes me want to read more.  It blends in conspiracy theory, current events, and mind-bending twists into a narrative that is sure to please anyone interested in possible Government/ Extraterrestrial connections.  The art is serviceable, but not bad.  It tells the story, but doesn't try to go above and beyond that minimum requirement.
Perhaps the BEST thing about this comic is that it's a Zenescope comic that you can actually read without hiding the cover.  Hopefully this is a trend that Zenescope will continue to follow!
Up Next. . .
Keepin' the Longbox Junk Halloween Party going with a trip back to 19th Century New York City and the spooky tale of a young woman beset by paranormal forces!  It's DC/Black Label's "Daphne Byrne" #1.
Be there or be square!
- read more
1 2 3 4 5 6...33 Previous >>