Welcome to the Longbox Junk 2021 Halloween Horror Party!
It's that time of year again!  That's right, 'tis the season to go to Wal-Mart and buy Halloween candy while listening to Christmas music on the overhead speakers as you shop! FA-LA-LA-LA-LA!!
But here at Longbox Junk, we know that Halloween is for HORROR!  So I'm taking the opportunity to shine the spotlight on some new horror comics that have come out in the past couple of years.  Up next is a thick one-shot from Aftershock Comics that asks the question. . .what happens when five kids find a human brain in a jar?  Ready to find out?
Let's do it!
SPOILER ALERT!  This comic has been out for a while, but it's still pretty new, so I'll keep spoilers to a minimum.  If you want NO spoilers, then scroll on down to the "Conclusion". END SPOILER ALERT. 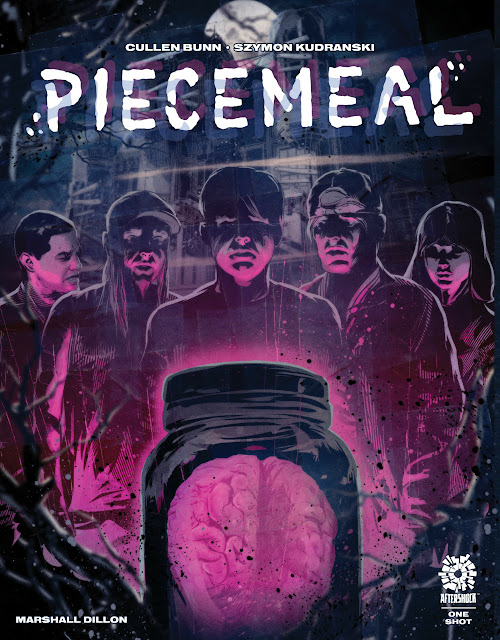 SCRIPT: Cullen Bunn
PENCILS: Szymon Kudranski
INKS: Szymon Kudranski
COVER: Szymon Kudranski
THE COVER:
I really like this one!  Now HERE'S a nicely-done horror comic cover.  The colors really catch the eye, with the strange purples, and pinks perfectly complimenting the deep shadows.  The composition of the kids standing around a jar with a brain in it just makes me want to buy this comic and see what the heck is going on!  All around a great cover.  One of the best I've seen for this little Halloween Horror Party.  Let's get inside!
THE STORY:
Our story takes place in 1989. . .
Five kids, all about to graduate high school and follow their own separate paths, are having one last party together in the local haunted house.  The bittersweet occasion is interrupted when one of them finds a human brain in a jar!
One of them (the main character, named Jamie) heads back alone to the house in the middle of the night to retrieve the jar.  As the days go by, Jamie begins to have horrific visions of death and black magic.
His senile grandfather finds the jar and tells Jamie that the brain belongs to an old friend of his.  Not long after, Jamie's friends begin to violently die one by one.  Jamie is convinced that his visions and his grandfather's stories are true.
Eventually piecing things together, Jamie learns that a serial killer discovered a way to return from the dead through an unspeakable ritual, and that he has been luring kids to the haunted house for decades, feeding off them in order to be reborn, piece by piece.
Determined to stop the deaths, Jamie and his one remaining friend return to the house and confront the reborn serial killer, who is a disgusting, half-formed creature.  After a desperate battle, they manage to destroy him.  In the end, Jamie now knows that there are strange things lurking in the shadows of the normal world around him.
The End.
THE REVIEW:
Okay. . .not a bad little story at all.  It's definitely derivative of Clive Barker's "Hellraiser" (or Hellbound Heart, the book the movie was based on) with a corrupt soul calling on the powers of darkness to be reborn after death, but coming back piece by piece and needing more and more blood to properly form his body.  The only thing missing is the Cenobites.  There's also a fairly strong whiff of "Stranger Things" in the nostalgic framework of five friends growing up and growing apart in the late 80's.
That said, the story is interesting and well-written.  The derivative nature of the story is softened by the way the writer makes it his own, making it feel more like a homage than a copycat as things go on.  Eventually, I was able to put aside the comparisons to other work and enjoy this creepy tale for what it is.
As far as the art goes, here we have the REAL star of the show.  It's dark and heavily-shadowed, almost monochromatic, but shaded with a strange mix of pink and purple.  The bright colors don't feel like they SHOULD work, but they do.  The unusual color choices give this whole comic a unique look that really captures both the eye and the imagination.
I didn't recognize the artist at first, but a bit of research showed me that he was also responsible for the dark neo-noir look of DC's Penguin: Pain and Prejudice mini-series that I also really enjoyed, as well as the most recent (and excellent) run of Marvel's Punisher.  I'll definitely keep my eye out for more work from Szymon Kudranski! 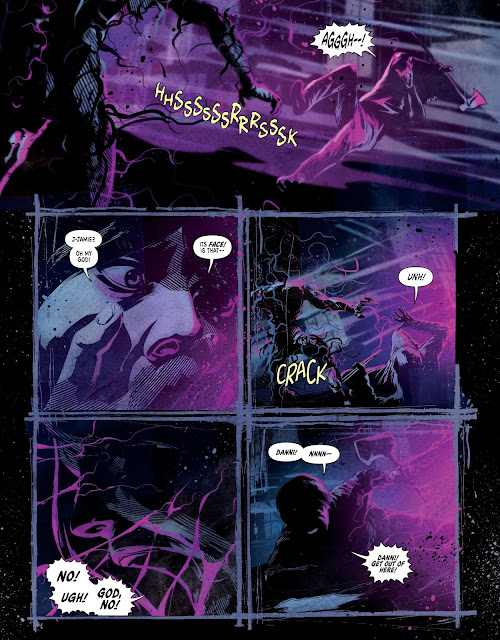 Overall, a very nice horror one shot!  The story IS pretty derivative of Clive Barker's Hellraiser, but leaves aside the psycho-sexual elements in favor of mixing in some Stranger Things late 80's nostalgia instead.  Thankfully, despite the obvious influences, the writer is able to make it enough of his own story to keep it from being a blatant copycat.
The art is where this comic really shines.  It's dark and nightmarish, shaded with pinks and purples that shouldn't work, but do.  This comic has a unique look to it that is very interesting and makes me want to find more of the artist's work.
I can definitely recommend this one to anyone looking for a creepy (if somewhat derivative) horror story with some excellent and unusual art.  I give Piecemeal the Longbox Junk gold seal of approval!
Up Next. . .
What's a Halloween Horror Party without some aliens?  Let's head on over to Area 51 and see if we can get to the bottom of what's REALLY going on, shall we?  We shall!
It's Zenoscope's Conspiracy: Area 51.
Be there or be square!
- read more
1 2 3 4 5 6...33 Previous >>