This year I've been shining the spotlight on some fresh NEW horror comics out there that you can still find on the stands.  Comics ain't cheap these days.  I tell you true, this hobby gets more expensive all the time.  If you're going to have to shell out four bucks for a single floppy issue, it might be nice to get an idea of what's inside.  You didn't ask me to do this, but you're welcome anyway!
So without further ado (wait. . .did we have any ado to start with?) let's get into the next Halloween Horror Party offering.  It's the first issue in a new horror anthology based around the strange events taking place in the rooms of a mysterious roadside hotel.  Ready?  Let's do it!
SPOILER ALERT! This series IS finished, but it's still on the stands, so if you don't want any spoilers, just scroll on down to the "Conclusion".  END SPOILER ALERT! 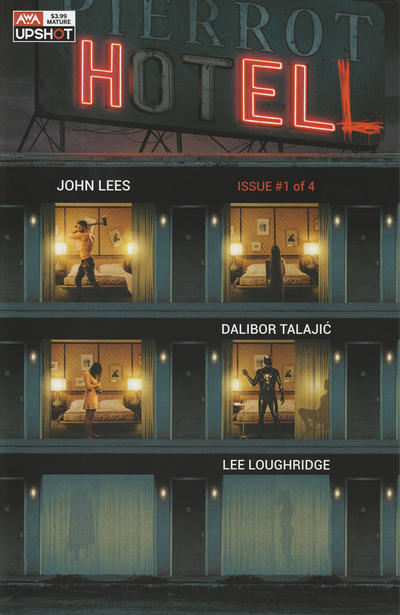 SCRIPT: John Lees
PENCILS: Dalibor Talajic
INKS: Dalibor Talajic
COVER: Kaare Andrews
THE COVER:
It's interesting, I'll give it that.  Offering glimpses into the windows of the mysterious hotel (and possibly into the stories of the four issues), this cover draws me in, but it's not the sort of thing I'd want to showcase on the "Wall O' Covers" in my office at work.  Let's get inside!
THE STORY:
We follow a woman named Alice, pregnant and on the run from her abusive husband, as she discovers the mysterious Pierrot Courts Motel and checks in for a night of much-needed rest.
She begins to have increasingly strange dreams about her unborn baby, and finds herself drained of energy and unable to leave the motel as several days go by.
At the end of the story, she comes to realize the creature she's been dreaming about isn't her baby, but a vampiric being, leading into an ending so confusing that I can't even figure out what the heck was going on. . .something about an eclipse and an explosion and her abusive husband taking the monster from her.  I don't even know.
The End.
THE REVIEW:
This story started off very strong.  An interesting neo-noir horror story about a woman trying to escape a monster and finding herself fighting another one.  It's well-written and a real page turner.
Until the end.
The final two pages of this story swing SO far away from the tight, gripping story told in the rest of this comic, that they are almost incomprehensible.  The final events taking place have absolutely no explanation as to what is actually going on.  The ending basically ruins the story, which is a shame because the rest of it is really good!
The art in this comic is perfectly-suited to tell the story at hand.  It reminds me a lot of the dark lines and thick inks of Eduardo Risso. . .and that's a good thing!  The great facial expressions are what's needed for a noir (ish) story of an escape from abuse gone wrong.  Too bad the great art is in service to a story that goes flying off the rails in the end. 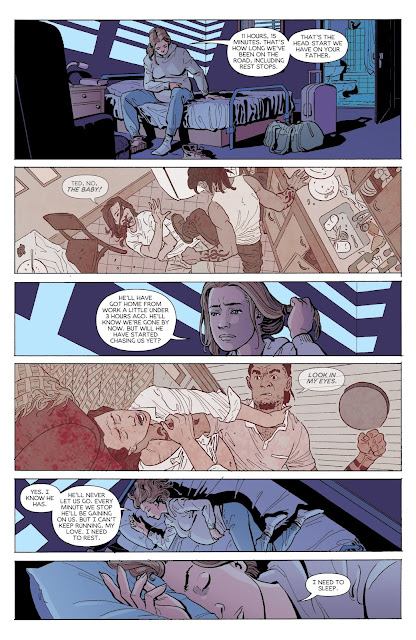 Overall, this is a story that starts strong and ends up flying off the rails into an extremely obtuse ending.  It's well-written and the art is really very nice, but I can't recommend this comic. It's a shame because I like to try and spotlight some of the lesser-known publishers from time to time.  They deserve a decent chance to get their stories read just as much as the big boys.  Unfortunately, this isn't a story that puts Upshot Comics in a very good light.  With so many other great new horror comics out there for your money, I'd say give this one a pass.
Up Next. . .
Let's keep the Halloween Horror Party going with a trip under the sea in search of gold aboard a sunken German U-Boat.  Does it go wrong?  It's a horror comic! Of COURSE it goes wrong!
It's the first issue of IDW's 2020 undersea horror story, Sea of Sorrows.
Be there or be square!
- read more
1 2 3 4 5 6...33 Previous >>