Welcome to the Longbox Junk Halloween Horror Party!  It's where for one month out of the year, you're actually ENCOURAGED to take candy from strangers. . .

This year, I've decided to take a look at some fresh NEW horror comics.  Nothing older than 2019 fresh.
Last time out, I spotlighted a bit of  slow burn character-driven horror centered around fear of the unknown.  This time around, let's get into a little bit of more traditional horror in the first issue of a great new anthology series from Image, with a story that reminds us to be careful what you wish for, because you might just get it. . .
Ready? Let's do this!
SPOILER ALERT!  This series is still ongoing (on issue #5 at this writing), and there will be spoilers.  But since this is an anthology series with a different writer and story in each issue, it probably doesn't matter as much as with something continued from issue to issue.  Still, if you want NO spoilers, just skip down to the "Conclusion". END SPOILER ALERT 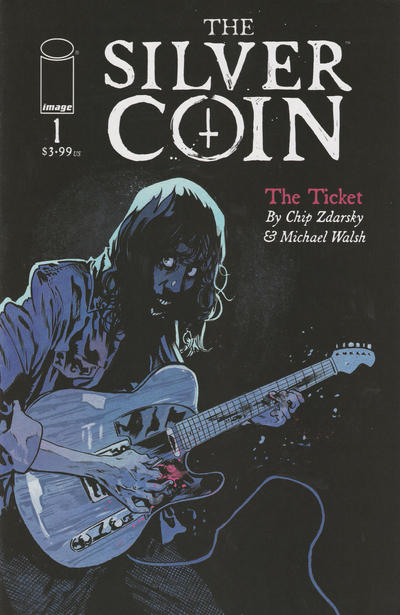 SCRIPT: Chip Zdarsky
PENCILS: Michael Walsh
INKS: Michael Walsh
COVER: Michael Walsh
THE COVER:
You can tell this is gonna be a dark story right from the cover.  You can see it in the horrified eyes of the guitar player as he literally plays his fingers to the bone.  The blood streaks on the fret board are especially chilling! It simple, but in its simplicity it's a real eye-catcher. Just a great cover.  Let's get inside and see what's going on here. . .
THE STORY:
In 1978 disco is king, which is unfortunate for rock guitar player Ryan and his band, barely scratching along by playing opening gigs at empty bars early in the evening before the disco bands show up.
But Ryan's luck is about to change!  When he finds an old silver coin while going through some old boxes at his father's house, he decides to use it as a pick during practice.  To the entire band's astonishment, they play better than they've ever dreamed of!
Realizing that there's something strange about the coin, they decide to use it at their regular gigs.  In only a few weeks the previously empty bar begins to fill with cheering customers.  They're bringing in so much business that the owner of the bar tells Ryan that he's got a friend from Polygram records he's going to invite to one of their shows!
The record company rep tells Ryan that he's great. . .but rock is dead and disco is king.  Ryan leaves his band and joins a disco group, playing to bigger and bigger crowds with single-minded determination to be the very best.
But then, one fateful night, Ryan plays to a wild, packed house and he discovers to his horror that he CAN'T stop playing!  As he shreds his fingers to the bone on his guitar strings, the crowd keeps dancing, even as the building burns down around them!
Later, we see firefighters in the ashes of the club commenting on how strange it was that nobody even tried to escape the fire.  We end with a fireman discovering and keeping the silver coin.
The End.
THE REVIEW:
Now THAT was a sweet little nugget of Longbox Junk!  It's a pretty straightforward story of a guy who wants to be the best and getting what he wished for. . .but not for long, and at a steep price.  It follows a tried and true story path that's been around longer than most, but the late 70's setting gives the story an interesting feel that gives the old "Be careful what you wish for" a bit of new life.
Zdarsky's writing in general gives this well-worn story path new life, with characters and dialogue that ring true even though we only get to know them for such a short time.  But be warned. . .there's a lot of profanity in this one.  I guess that's one of the hallmarks of this new wave of horror comics on the stand now.  Realistic dialogue means lots of F-Bombs.  So, like the first comic I reviewed for this Longbox Junk Halloween party. . .if you don't like naughty words in your funny books, you probably won't like this very much.  They're on just about every page.
On the art side of things, Michael Walsh's kinetic style is PERFECT for this rock-n-roll horror story!  The figures have a sense of motion and life that almost moves across the page!  His lines are dark and nightmarish, the colors are bold, and every page is worth lingering over. 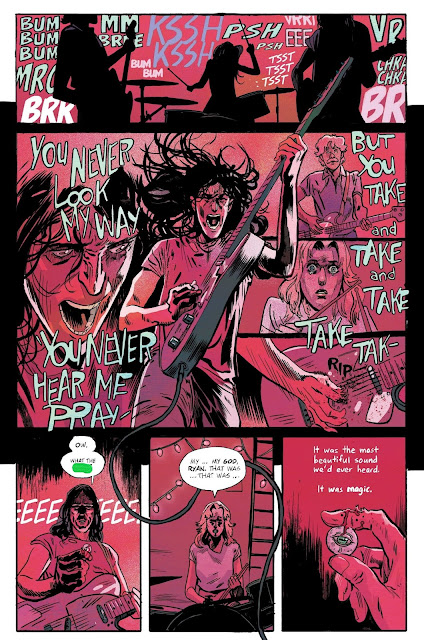 Overall, we have a story that follows the tried and true path of "Be careful of what you wish for", but given a spark of new life with an interesting 70's setting and well-sketched characters with great dialogue.  Once again, be warned that there's a lot of profanity to be found, but it fits in with the rock-n-roll setting of the story.
The story is perfectly backed up with some dark and nightmarish art that serves to compliment, rather than distract.  Every page in this comic is worth lingering over for an extra second or two.  This first issue is a practically perfect storm of words and art.
In my humble opinion, The Silver Coin is one of the best new horror series out there right now.  If you check out ANY of the comics I spotlight during this year's Longbox Junk Halloween Horror Party, check out THIS one.  If you're a horror comic fan, take my advice and seek this series out.
Each issue has its own story, loosely connected by the mysterious silver coin (and the 5th issue has the origin of the coin), and each issue is an almost perfect little nugget of Longbox Junk gold.  I'm a big fan of anthology comics of the past, and this series stands right there with the best of them.
Up Next. . .
I'm keeping the Longbox Junk Halloween Horror party going!
It's a comic series based on the hit horror franchise, and a prequel to the latest movie in the series, it's DC's The Conjuring: The Lover.  Comic book movie tie-ins are usually hit or miss, without much in between.  Which one will this be?  Let's find out!
Be there or be square!
- read more
1 2 3 4 5 6...33 Previous >>