Welcome to Longbox Junk, the place to find all the comic reviews you never asked for!
It's October!  There's a chill in the air that means it's time for some spooky fun here at Longbox Junk! This time of year, I like to take a look at some of the darker comics in my collection as we head toward Halloween.
Last year, I had a lot of fun spotlighting some of my older Halloweeny (Is that a word? It is now!) comics and threw a big handful of Longbox Junk Halloween Retro Reviews into the candy bucket.  This year, I'm going to do the opposite and check out some new stuff. . .as in nothing older than 2019 stuff.
Rummaging through my collection for some dark and spooky modern comics to review, I realized that sort of out of nowhere, horror comics have been making a comeback. . .and in a big way!  As I look at some of the "Values" of these comics, I have to say that I'm a bit surprised!  A lot of these new horror comics are NOT Longbox Junk at all!
As a big fan of horror comics in general (just hit the "Halloween" label on the quick link bar to get an idea of what I mean), I couldn't be happier to see them coming back so strong.  Maybe not so happy about jacked-up back issue prices, but if that's what it takes to keep new horror comics coming, who am I to say?
But enough introduction! Let's get this Longbox Junk Halloween party started!
First up is an offering from DC's Black Label.  Looking through the stack of horror comics I've pulled from my collection, I realize that they are pretty heavy on the Black Label imprint, so credit to DC where credit is due for keeping the horror comics alive and kicking.  Don't get me wrong. I've got some stuff from other companies too, but DC is definitely coming on strong with the modern horror.
Ready? Let's take a look!
SPOILER ALERT! The comic at hand is still ongoing (it's on issue #4 as of this writing).  I'll keep spoilers to a minimum, but there will still probably be a few.  If you don't want ANY spoilers, just skip down to the "Conclusion". END SPOILER ALERT!

THE NICE HOUSE ON THE LAKE #1 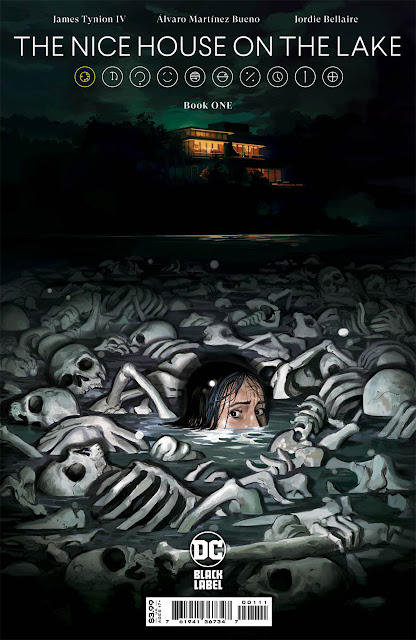 SCRIPT: James Tynion IV
PENCILS: Alvaro Martinez Bueno
INKS: Alvaro Martinez Bueno
COLORS: Jordie Bellaire
COVER: Alvaro Martinez Bueno
THE COVER:
It's dark.  It's moody.  It's creepy!  This is the kind of cover that makes you wonder just what the heck the story is about.  It's simple, but it grabs your attention.  Very nicely done.
THE STORY:
A mysterious man named Walter invites a group of ten friends and acquaintances to a luxurious lake house for a relaxing week.  But after they arrive, they soon discover that things are a little TOO perfect.
When they finally hear news from the outside world, the group is horrified to learn that they have been living comfortably while an apocalyptic disaster is destroying civilization, and that the United States has ceased to exist!
When they demand answers from Walter, he tells group know that he has chosen them to be safe, that they will be living there for the rest of their lives, with all their needs taken care of.
After giving them this startling information one of the group attacks Walter, but he reveals himself as some sort of inhuman being and vanishes, leaving them to wonder what happens next. . .
To be continued.
THE REVIEW:
Allrighty then. . .it's the end of the world as we know it.  This issue was mostly introduction until the shocking events toward the end.  It makes a lot of use of "social media" to tell most of the story, but where something like that would be awkward elsewhere, here it fits very nicely with the young, hip group that the mysterious Walter has chosen to ride out the apocalypse at the titular Nice House On The Lake.
I found the story very well written, the large cast of characters are varied and interesting, and the big twist was a genuine surprise.  I was thinking this was going to be some sort of murder mystery or revenge tale, and we get a full-on apocalypse!  Very well done.
Fair warning, though. . .there is literally not a single page in this comic without at least one F-Bomb (I had to edit one to post it for this review).  It matches the young crowd of characters, but if you don't like a lot of cussin' in your funny books, you probably won't like this one much.
The art isn't the best I've seen in a comic, but it fits the ambiguous nature of the story, being nicely detailed in places and very sketchy and unfinished in others.  See the page I scanned below for an example of both in one place. 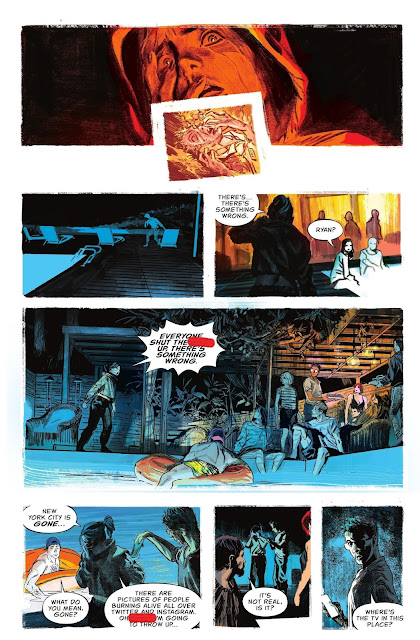 Overall, I found Nice House On The Lake to be a great introduction to a story that seemed like it was going to be one thing and turned out to be completely different.  It has a large cast of diverse and well-drawn characters that are thrown together in an almost unimaginable situation. The writer gives them all pretty realistic voices, but be warned about the large amount of profanity in this dialogue-heavy tale.
Going forward, the series digs into the characters and the central mystery, doling out little bits in each issue that keeps me wanting to see what happens next.  It's not traditional horror by any means, but horror for today's social media obsessed generation.  The only monster to be found (so far) is the unknown.
It's a dark, character-driven mystery with a horrific angle, and it has me hooked and waiting for each issue to come out!  Give it a try if you're looking for a horror story that's different and unpredictable.
Up Next. . .
What happens when a mysterious silver coin seems to be the answer to a young musician's dreams?
Well. . .I'm reviewing the comic for the Longbox Junk Halloween Horror party, so you can probably guess it ain't gonna end well.  It's Image's "The Silver Coin".  Let's check it out!
Be there or be square.
- read more
1 2 3 4 5 6...33 Previous >>