Welcome back to Longbox Junk, where you can find all the comic reviews you ever, er. . .NEVER. . .asked for!

It's October!  It's that time of year when you can buy a ten pound bag of candy and not feel a single bit of shame!  Here at Longbox Junk, we've been having a fine little Halloween party.  All this month I've been taking a look at some of the older and/or more valuable comics in my collection that lean toward the supernatural.  It's been a bit hit or miss so far, but it's been a lot of fun digging into the darker corners of my longboxes.
Let's keep the party going with another visit to the Bronze Age!
Ready?  Let's do it! 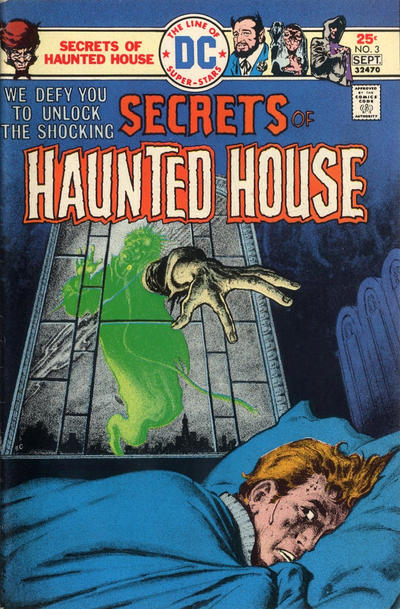 COVER: Ernie Chan
THE COVER:
Another great Halloween cover!  The top is a little cluttered, but that doesn't take away from the creepy image of a hand. . .reaching. . .slowly. . .toward. . .YOU!  Ernie Chan does a great job of bringing this nightmarish scene to life!  Let's see what's inside. . .
THE STORIES:
There's just two stories in here this time.  Let's hope they're good ones!
PATHWAY TO PURGATORY
SCRIPT:  Jack Oleck
PENCILS:  Ruben Yandoc
A cruel Duke who rules his fiefdom with an iron fist despite being born without legs desires to marry his young and beautiful ward, which is against the religious law of the land.  Determined to win her love by being a "whole man", he tries to gain legs by appealing to a monk purported to have the power to perform miracles.
When he is spurned by the monk after revealing that he wants legs in order to marry his young ward, the Duke flies into a rage and beats and imprisons the monk before throwing in his lot with the powers of evil and going to a witch to try to gain legs. 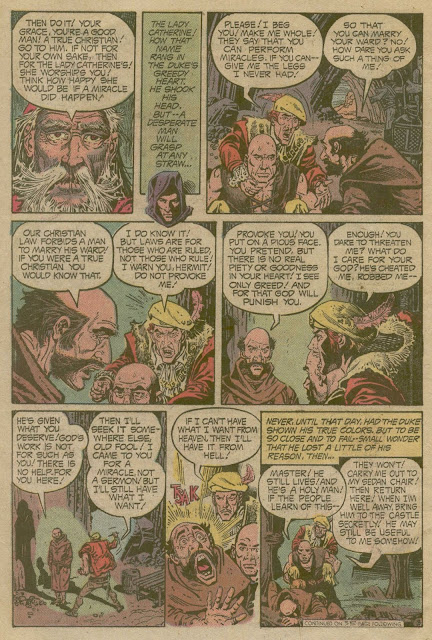 Initially, the witch refuses, but after she is tortured by the Duke and her daughter is killed by the cruel man, she relents and uses her powers to give the Duke legs, but she also delivers a curse upon him before he kills her to hide his secret. 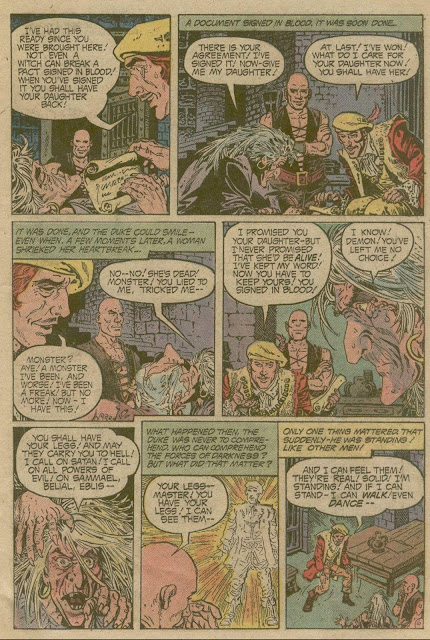 Now whole, the Duke proclaims his love for his ward, but since he has raised her from the time she was a child, she sees him as a father figure and rebuffs his proposal.
Infuriated, the Duke goes ahead with the wedding plans, even if he has to force the girl to the altar.  The religious authority of the realm refuses to go along with the Duke's sinister plans, but relents after being threatened with torture and death.
And so the wedding takes place, but on the wedding night, the young bride rushes from the Duke's bedchamber, screaming! 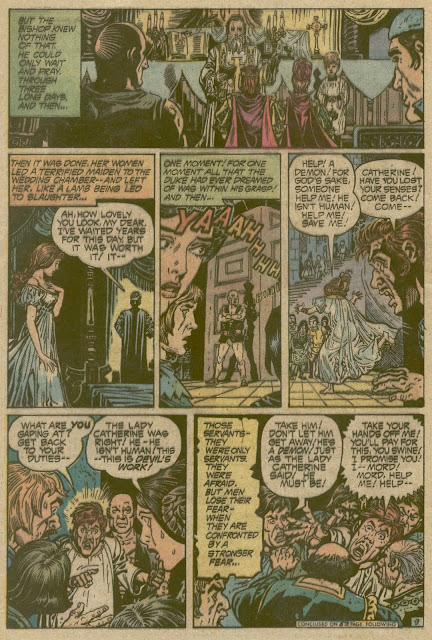 The Duke's subjects quickly seize their cruel ruler and drag him to the gallows, hanging him once it is revealed that he has the legs of a goat.  And so the witch has her final revenge from beyond the grave! 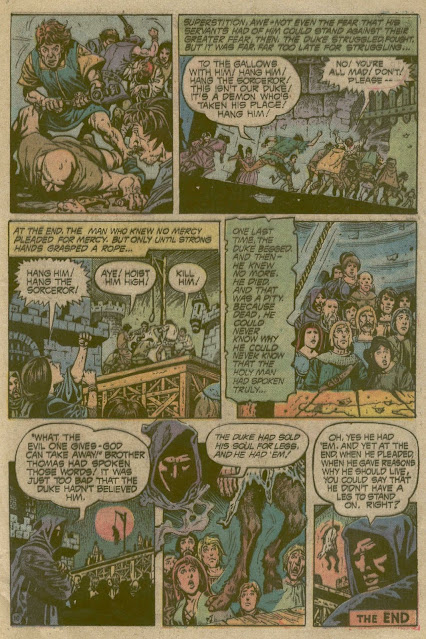 The End.
Okay, not bad at all!  I really enjoyed this little story a lot.  It follows a pretty well-worn morality play story path of "If you deal with evil, you get what you deserve", but the setting and writing. . .the sinister tone of "You KNOW this isn't going to end well" , grabbed my attention and kept it from start to finish.
But what really brought this little story to life was the beautiful, detailed art!  Just look at those pages scanned above!  I've never heard of this artist, but a bit of research shows me that he's a Filipino artist whose main U.S. comic work was on DC's "horror" titles (such as this one).  I'm definitely going to keep my eye peeled for more of this fantastic artist's work!
Overall, a great start for this comic!  A well-written story backed up by amazing art. What more could any comic fan ask for?  Nothing!  I couldn't ask for anything more than what I got right here!
NEXT!
THE SWINGER
SCRIPT: Mike Pellowski & Maxene Fabe
PENCILS: Ramona Fradon
Carlton Phipps is a "Playboy" Millionaire, but is also a huge coward.
After being embarrassed one night, he trains in martial arts until he becomes an expert.  Wanting to show off his new skill, he goes to the worst part of town and accidentally kills a man. . .worse, it's a police officer! 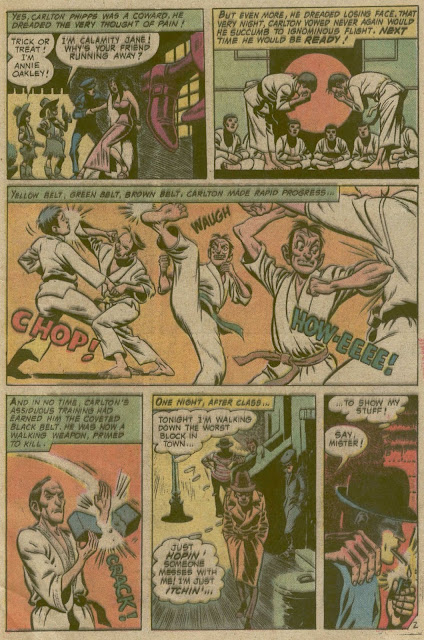 He quickly blames the killing on a nearby homeless man and is hailed as a hero after falsely testifying at the man's trial, which leads to his execution. . . 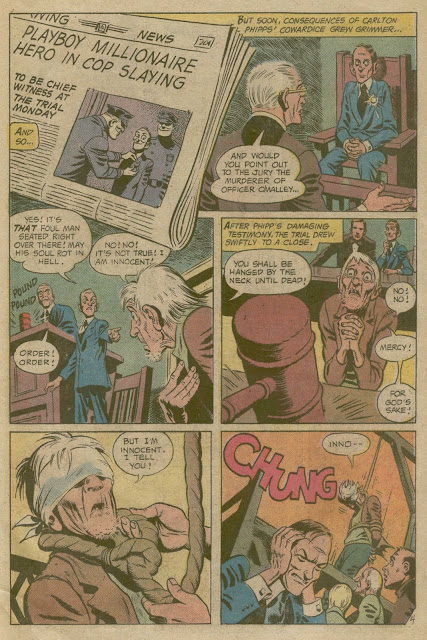 But after the innocent man's hanging, Carlton begins having constant paranoid feelings of being choked and becomes convinced that the ghost of the homeless man is trying to get its revenge by killing him. . . 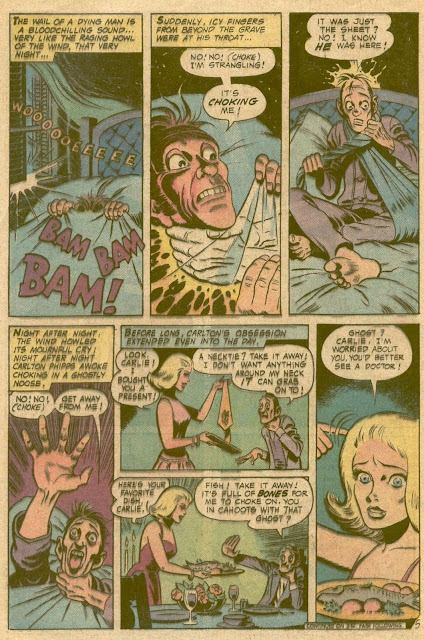 Finally, a doctor tells Carlton that he needs to forget his delusions with a long trip and change of scenery.  But as he pilots his private plane to Rio, a terrible storm strikes, forcing Carlton to bail out.  The next day, he's found hanging from his parachute, dead.  The ghost of the innocent man has finally gotten his revenge! 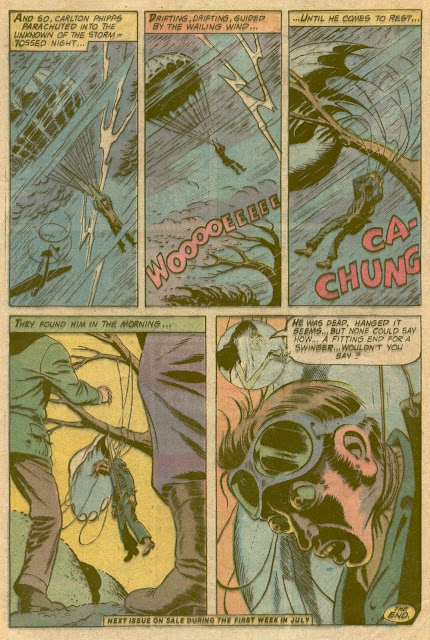 The End.
A very nice little "Revenge from beyond the grave" story!  It's short, sweet, and a bit predictable, but I really liked it a lot. . .mainly because of the standout artwork from Ramona Fradon.  She's an artist I just learned about not long ago, and I decided to keep my eye out for more of this remarkable woman's artwork.  Her cartoony, yet detailed, style reminds me a lot of Will Eisner, and I haven't seen a single panel of bad art from her yet!
Overall, we have another winner!  It's a well-written little morality play story with a "He got what he deserved" ending backed up by some simply amazing comic art.  There's nothing I don't like about this story!

There's only two stories to be found here, but panel for panel they're some of the best I've seen during this little Longbox Junk Halloween party.  They aren't really "Horror" stories, but are more along the lines of something you might see on The Twilight Zone, but both of them are well written and engaging.
The best part of this comic for me was the art!  First, some fantastic super-detailed art from an artist I've never heard of, but am definitely interested in seeing more of based on the strength of what I see here.  And then some amazing cartoony art from remarkable female comic artist Ramona Fradon, who is someone well worth looking into for those not familiar with her work.
Together, the art and writing deliver the kind of storytelling that is the reason that I'm a comic fan in the first place!  This isn't just a good Halloween comic, this is a good comic, period.  It's definitely a nugget of Longbox Junk gold.
Up Next. . .
We're going to stay in the Bronze Age, but head back over to Marvel for a look at 1973's Chamber of Chills #5.  Voodo Magic! Ghostly Hitchhikers! Criminal Insanity and More!
Be there or be square!
- read more
1 2 3 4 5 6...29 Previous >>