Welcome back to Longbox Junk, the blog stuffed absolutely FULL of comic reviews you never asked for!

It's October!  That great time of year when you see people wearing shorts AND a heavy jacket at the same time.  It's also the time of year when we celebrate spooky comics here at Longbox Junk!
This year, I'm mixing it up a little by shining the spotlight on some of the older and/or more "valuable" comics in my collection with a supernatural twist.  It's been a bit of a mixed bag so far, but I've been having fun with it.
The comic at hand is part of Marvel's attempt to pick up the mantle of the long-running "Classics Illustrated", which stopped publishing in 1971 after a very respectable 169 issues adapting various literary works into comic form.
Marvel Classics Comics lasted for 36 issues and ( if you like this kind of thing) are well worth keeping your eye out for.  They feature a "Who's Who" of great Bronze Age comic talent. . .this particular issue features the first published comic work of superstar artist Michael Golden on the third story.
SO. . .
A Mighty Marvel adaptation of three of the creepiest stories ever written and featuring the first comic work of a notable Bronze Age artist?  How can this NOT be good?  Let's do this!

THE PIT AND THE PENDULUM 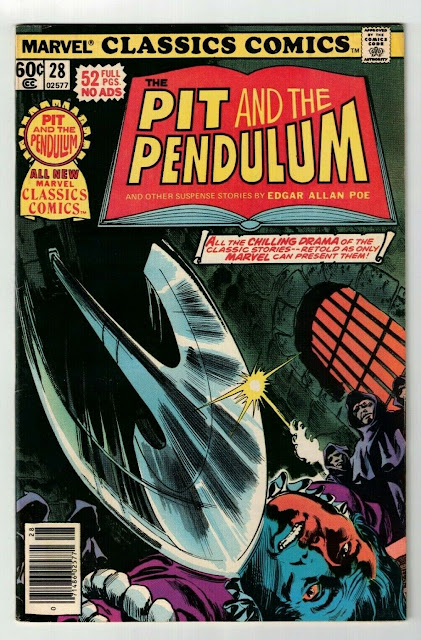 COVER: Gene Colan
THE COVER:
We start things off with a cover by one of my personal top ten Bronze Age artists, Gene Colan.  I have to admit that I don't like this cover as much as I feel I SHOULD, but it seems like there's a bit too much wasted space.  The terrified face of the victim is great, but it's sort of hidden away down in the corner.  Not a BAD cover (I don't think I've ever seen anything by Gene Colan I'd call bad), but it could have been better.  Let's get inside!
THE STORIES:
Although this comic's title and cover leans heavy into "The Pit and the Pendulum", there's also adaptations of "The Tell-Tale Heart" and "The Cask of Amontillado" in here by the same writer, but with different artists.  Let's give them each a turn. . .
THE PIT AND THE PENDULUM
SCRIPT: Edgar Allan Poe, adapted by Don McGregor
PENCILS: Rudy Mesina
An unnamed man is brutally tortured by the Spanish Inquisition after being sentenced to death.  Relying on his wits and pure determination to live, he manages to avoid a terrible fate several times before being rescued. 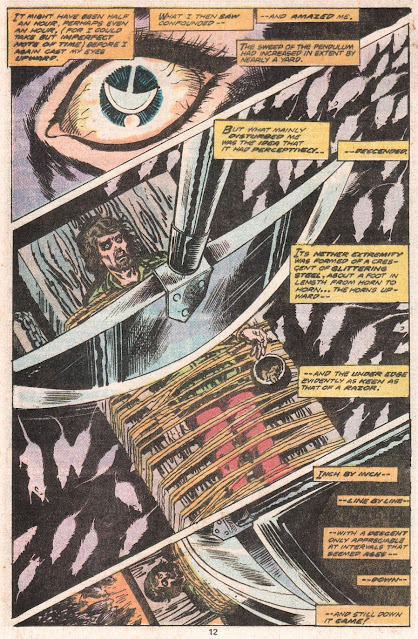 Widely-regarded as one of Poe's greatest stories, this short tale of terror and torment is a simple one at heart, with no named characters and a pure focus on the torture endured and the mental toll it takes on the main character.  This is actually one of the best adaptations of the story I've seen.
Don McGregor maintains the rambling first-person narrative of the original tale, condensing it down to the bare essence needed to translate into comic form.  Rudy Mesina backs the writing up with dark, horrific art that perfectly captures the desperate, helpless tone of the story.
A simply fantastic re-telling of a classic tale!
NEXT!
THE TELL-TALE HEART
SCRIPT: Edgar Allan Poe, adapted by Don McGregor
PENCILS: Yong Montano
After a caretaker murders an elderly man, he cleverly hides the body, but while being interviewed by the police, he is so tormented by the perceived beating of the dead man's heart that he confesses his crime. 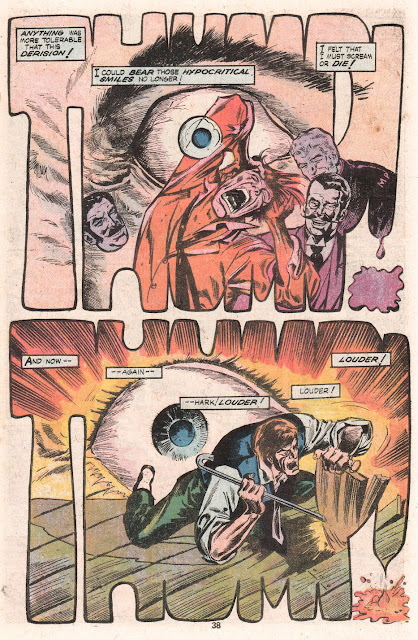 Don McGregor knocks it out of the park a second time by stripping down the original narrative JUST enough to adapt it to comic form, while artist Yong Montano provides some fantastic visuals that take us on the narrator's journey to madness through some really interesting panel forms and layouts.
Together, the creative team gives the reader a dark trip into a twisted mind that makes even a story as well-known as this one a gripping read!  Very nicely done.
AND FINALLY. . .
THE CASK OF AMONTILLADO
SCRIPT:  Edgar Allan Poe, adapted by Don McGregor
PENCILS: Michael Golden
After being somehow insulted, the injured man lures the perpetrator deep into a family vault, where he walls him up alive. . . 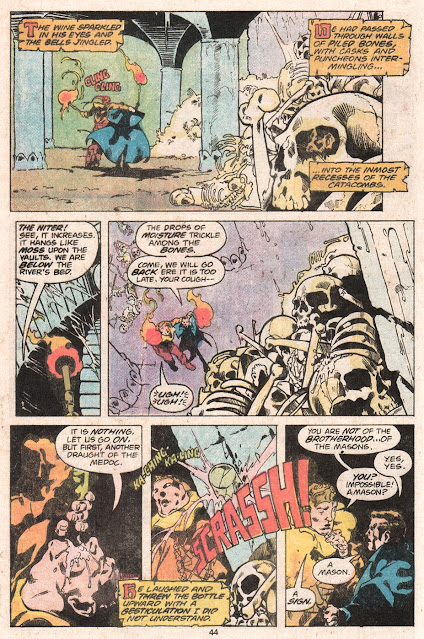 Once again, Don McGregor strips a classic tale down to the terrifying essence, taking just enough of the original narrative to adapt the story to comic form, and leaving the rest to the artist.
I mentioned above that this is Michael Golden's first published comic work, and as you can see from the page scan above, he arrived with his unique style already fully-formed!  Often, when you see an artist's early work compared to their later, there can be a significant difference.  This is not the case here.
Golden's signature realistic-yet-exaggerated and darkly-inked style perfectly compliments the horrific tale of a man lured to his death.  He deftly takes over where McGregor leaves off, providing the reader with a fantastic rendering of what normally must be created in the mind's eye.
Overall, a practically perfect comic adaptation of what is already a practically perfect story.

When I was ten years old, my introduction to the world of horror was with a gigantic illustrated and annotated volume of Edgar Allan Poe's stories that I got for a Christmas present.  The Pit and The Pendulum and The Cask of Amontillado were two stories that gripped my young attention , and they remain two of my favorite stories today.  Both of them short and simple, but terrifying in a way that no vampire or ghost story could ever be.
This comic adaptation of three stories that I have read and enjoyed MANY times are of such quality in both writing and art that they once again gripped my imagination and seemed almost new!
Bottom line. . .if you are a fan of Edgar Allan Poe or horror comics (or both), then you should have this comic in your collection.  Despite being Michael Golden's first published comic work, it's not anywhere close to being "valuable" to collectors, so copies can be found cheap. . .I paid one lousy buck for mine.  Plus I see it's on ComiXology, so there's that as well.
If you're looking for some creepy Halloween comic reading, you can't do much better than this.
Up Next. . .
It's time to invite a Werewolf to this Halloween Party!
Marvel's Werewolf By Night #11 from 1973.
Be there or be square!
- read more
1 2 3 4 5 6...30 Previous >>