Welcome to Longbox Junk, where I write comic reviews that nobody ever asked for!

There's a crisp coolness in the air. The leaves are beginning to fall. It's October! It's time for some annual Longbox Junk Halloween Fun! That's where I dig through my collection and unearth all manner of spooky or scary comics and post as many as I can over the next 31 days!

For those of you who were enjoying my series of Longbox Junk Retro Reviews, I sincerely apologize and. . .HAH! Just kidding! We're going to start the Halloween Fun off with another Retro Review!

I noticed as I was digging through my many longboxes seeking out older comics to feature in my recent run of Retro Reviews that I actually have quite a good handful of older "horror" anthology titles including Witching Hour, Haunted, Chamber of Darkness, House of Mystery, Monsters Unleashed, and MORE! More than enough of them to carry this whole month!

Let's get things started by cranking up the Longbox Junk paper time machine and setting the dial for 1971 so we can take a look at Haunted #1, featuring legendary comic artist Steve Ditko! 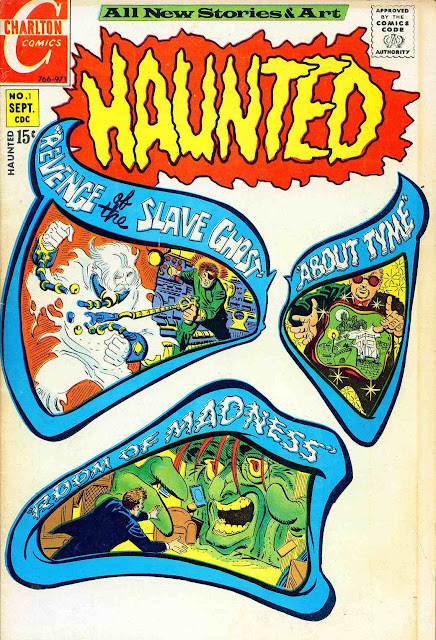 COVER: STEVE DITKO
THE COVER:
I absolutely LOVE this cover! It makes regular appearances on my Halloween version of the "Wall O' Covers" in my office at work.  I love the stark white background.  I love the brilliant colors.  I love the way Ditko uses the ghostly eyes and mouth as floating picture frames previewing the stories inside. There's nothing I don't like about this cover!
THE STORIES:
SCRIPTS: Joe Gill
PENCILS: Steve Ditko
INKS: Steve Ditko
There's three full comic stories and a short text piece in this issue, all by the same team. Let's take a look at the stories each in turn, shall we?  We shall!
THE ROOM OF MADNESS
A powerful businessman purchases a cursed Persian carpet and quickly descends into madness before becoming the rug's final victim. . . 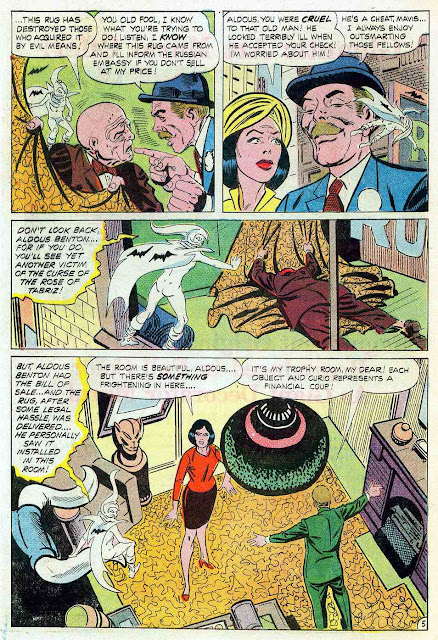 A pretty straightforward story following a steady track from showing the rug being cursed in centuries past through a few owners (including Hitler) to its final owner and victim. This story really didn't grab me at all.  It's not BAD, there's just no real thrills or chills to be found.  The little ghostly narrator appearing in almost every panel is sort of annoying.  Ditko's art seems to be lacking something as well.  Some panels seem sketchy and sort of unfinished.
Not a great start.  Let's move on to the next tale. . .
REVENGE OF THE SLAVE GHOST!
An evil man discovers the means to bring spirits to the earthly plane through science.  After he successfully manages to enslave the spirit of a good man to do his evil deeds, he goes too far and finds himself enslaved in turn by malevolent ghosts. 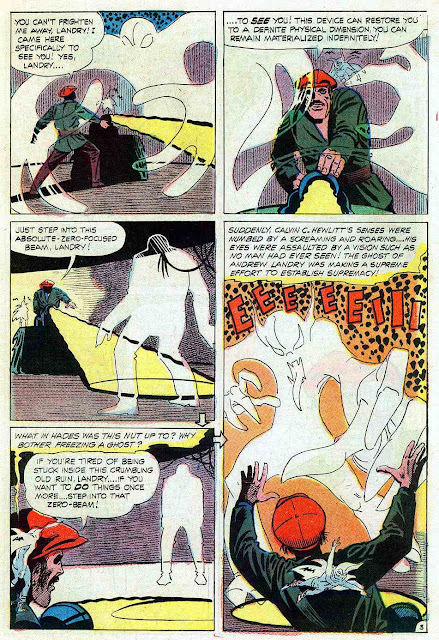 Another story that's just sort of interesting, but not really memorable.  Like the first story, it's extremely straightforward and lacks any sort of thrills or chills that might be expected in a horror/supernatural comic.  The ending doesn't really make much sense either.  It just sort of comes out of nowhere, like the writer just decided it was time to wrap up the story any way he could.  Ditko's art here is an improvement over the first story, but still seems to be lacking a certain something.
Moving along. . .
IT'S ABOUT TYME
A scientific genius with powerful psychic abilities named Mister Tyme invents a machine that can predict the stock market.  A rival steals the machine's data, but kills Tyme's assistant in the process.  Tyme is framed for the murder, but uses his psychic powers to show the police what really happened. 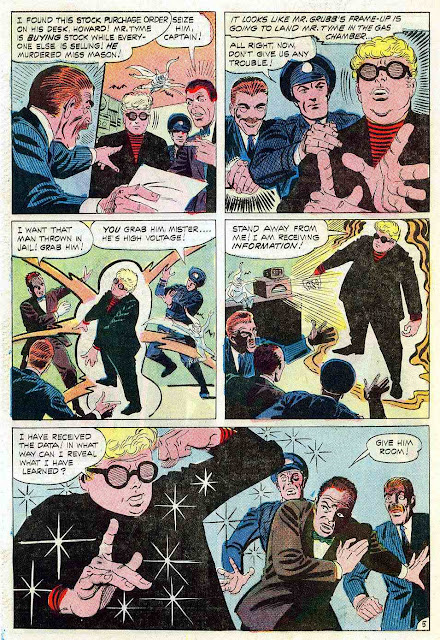 This story was pretty bad.  It doesn't make much sense at all, and seems like the writer just took a bunch of concepts and threw them against the wall to see if any would stick.  It looks like Mister Tyme is supposed to be being built into a recurring character, but I don't have any other issues of Haunted to see if that's what happened.  In any case, this story is weak and all over the place.  Likewise, Ditko's art is all over the place, swerving in quality from panel to panel on each page of the story.
AND FINALLY. . .
TRANSMUTATION TROUBLE (One Page Text-Only Story)
A famous hunter defies popular opinion by his belief in witchcraft.  He discovers a herd of shape-shifting deer and wounds one, discovering the next day that it is the daughter of a friend. 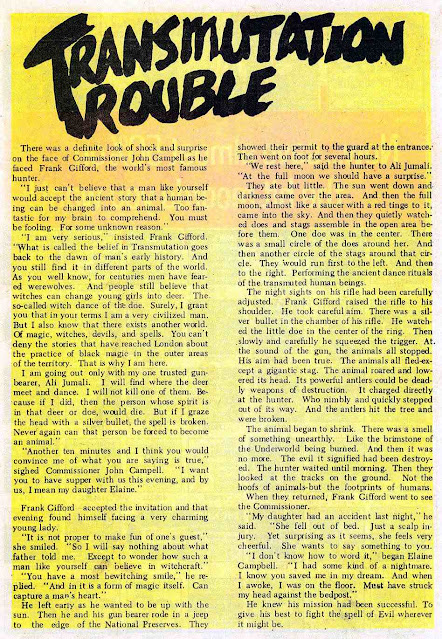 This is one of most poorly-written text stories I've ever found in a comic.  Look. . .I realize that these text pieces are basically page fillers and probably the feature that is paid the least amount of attention to.  I'm pretty sure that most of the time they're never even read.  But still. . .a LITTLE bit of effort could be expected.  This reads like something a twelve year old kid would handwrite in a spiral notebook as the first chapter of a never-finished story that he lost interest in as soon as he got his bike fixed.  Not a great way to end the comic.

I bought this comic for the awesome cover. . .and truthfully, that cover is the best thing to be found here.  Overall, this whole comic was pretty disappointing.  None of the stories were memorable in any way, and struggled to reach a high bar of "Sorta interesting".
For a lot of comic fans, the main draw here isn't the writing, though. . .it's going to be Steve Ditko's art.  Unfortunately (with the exception of the cover) this is not the best example of Ditko's art talents.
There are those who think that Ditko can do no wrong, and I'm not here to try and knock a comic legend off his well-deserved pedestal, but a simple look at the few pages I scanned above will tell the story. . .the art here is average at best,  and fairly poor in places.  EVERY comic talent, no matter how great, has phoned it in from time to time.  This comic looks like one of those times for Ditko.
All in all, unless you're a big Steve Ditko fan, I can't recommend this comic.  It's kind of a shame because that awesome cover builds a sense of expectation, but this is just one of those times when I have to say that they all can't be winners.
Up Next. . .
More Longbox Junk Retro Halloween Fun!
We didn't get off to a great start with Haunted #1, so I'm sending the paper time machine all the way back to the Golden Age and before that pesky Comic Code thing. 1953's Chamber of Chills #17!
Be there or be square!
- read more
1 2 3 4 5 6...32 Previous >>