Welcome back to Longbox Junk, where comics are worth more than money.  That's my way of saying that if someone broke into my house to steal my comic collection, they'd find it more trouble on their back hauling them out than what the job would be worth  . . .BUT I DIGRESS!

I've said it before, and I'll say it again. . .I'm a sort of patriotic guy.  I come from a long line of military men, and as a proud veteran of the U.S. Marine Corps myself, I tend to be a bit of a flag waver and I ain't ashamed to admit it. And with times the way they are, maybe we need to wave the flag just a little.

Wait! Wait. . .don't go!  I'm not gonna get political.  I'm just introducing the Longbox Junk "theme" for July!  It's Captain America, okay? I'm going to be looking at some Captain America comics through this month.

It IS Captain America, so if you aren't the kind to tolerate a little "AMERICA, %$#& YEAH!" in your funny books, then maybe you might want to skip the next few posts. But come back in August!

Okay, everyone in that's staying in?

Let's start this off by stepping outside of the usual Longbox Junk bargain bin finds with a little something brand new and on the shelves right now.

DC gets a bit of flak for squeezing every possible drop out of their seminal "Watchmen" series by constantly trying to add to something that doesn't really need anything added to it. But never let it be said that Marvel isn't just as guilty of the exact same thing with their own critically acclaimed series, "Marvels".

What we have here is the first of a new series of one shots trying to capitalize on what little magic is left in Kurt Busiek and Alex Ross' masterwork of seeing superheroes through the eyes of the common man.

The series is called "Marvels Snapshots", and the first one out of the gate features Captain America (and The Falcon) in a continuation of Jack Kirby's 1970's "Madbomb" storyline. . .the first issue of which (Captain America #193 from 1976) got a a fine Longbox Junk Retro Review  HERE .

We've got a one shot walking the tightrope of adding to a fan favorite series that doesn't really need anything added to it AND trying to continue a classic Bronze Age story from one of the giants of the comic world.  It's got some work cut out for it.  Let's take a look! 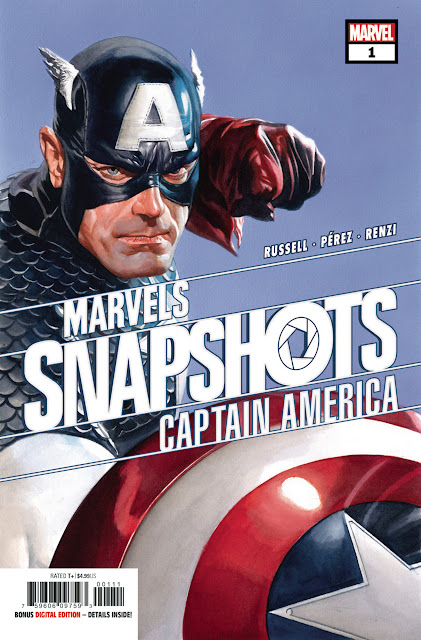 THE COVER:
Marvels was the series that put superstar artist Alex Ross on the mainstream map, so it's a good call in my book getting him on board to do the covers of the "Snapshots" one shots.

As far as the cover itself, it's a great portrait shot of Cap painted in Ross' trademark hyper-detailed and realistic style.  I love the determination in Cap's eyes and the grim set of his jaw!  I don't know who's about to get punched, but I can see by the look on Cap's face that they definitely deserve it.  Alex Ross is a fantastic visual storyteller and in this simple shot of Cap getting ready to deliver a New York Special, there's a story being told.

It's not the greatest Captain America cover ever, but this is definitely worthy of a turn up on the rotating "Wall O' Covers" in my office at work.  Let's get inside and see what else is going on here.
THE STORY:
Felix Waterhouse is a teenager living in a poor South Bronx neighborhood.  Extremely gifted with electronics, he's working in his father's television repair shop and trying to earn enough money to escape poverty and go to college.

The Madbomb attack hits Manhattan.  Felix's neighborhood is on the edge of the attack, but it is still devastated by the ensuing riots before Captain America manages to destroy the device causing people to go mad and attack each other. 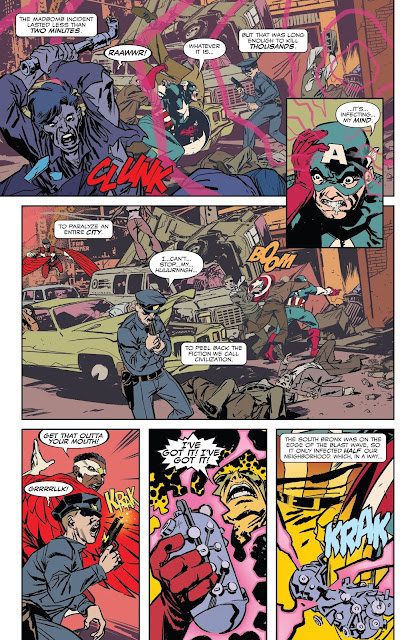 In the aftermath of the Madbomb attack (during which Felix's mother kills his little brother), life returns to normal for most of the city.  The superheroes of New York turn their attention to new threats as the city begins to rebuild. 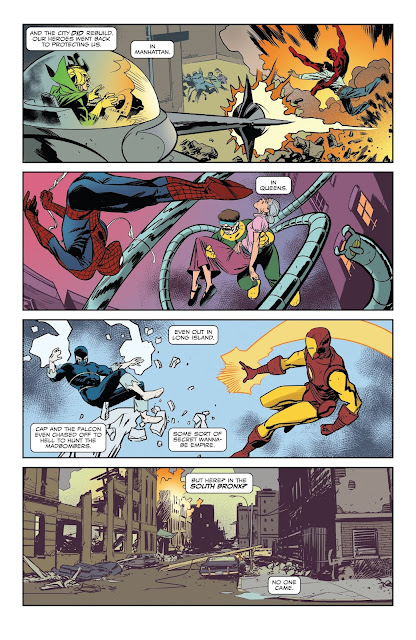 Unfortunately, conditions in Felix's neighborhood only get worse as the devastation of the Madbomb causes businesses to leave and gangs to move into the blocks of  abandoned and burnt out buildings.  Crime is rampant and even worse, loss of business at the T.V. repair shop means that Felix has to spend his college savings just to keep his family going. 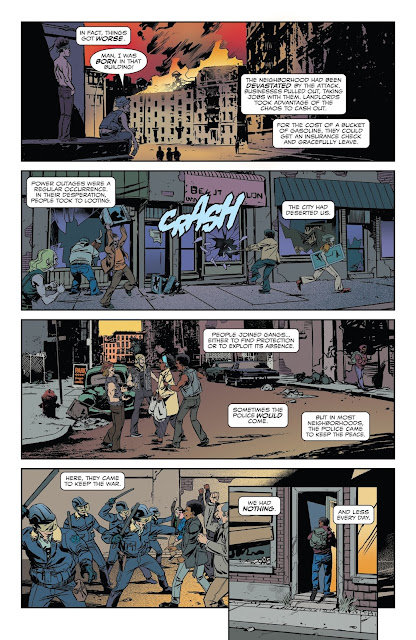 Things are looking bleaker and bleaker for Felix until one day a mysterious man comes into the shop with a strange offer. . .he represents an organization interested in Felix's talents with electronics and will give him a good job, as well as pay for his college education.  The catch is that the organization he represents is A.I.M.  A well-known part of the villainous Hydra!
Felix declines at first, but as he sees repairs being made to the wealthier sections of the city while neighborhoods like his are ignored, he decides to take the man up on his offer.  He is taken to an elaborate secret research base hidden beneath Manhattan to begin his new life. 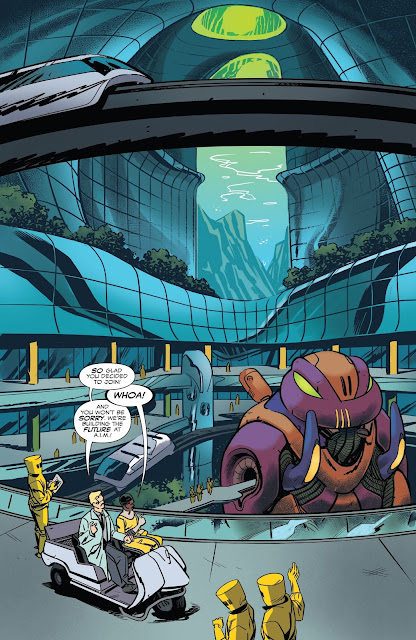 Felix quickly fits in with his new A.I.M. colleagues and his extraordinary talents with electronics gain the attention of his superiors.  Because of this, he is one day taken to the most restricted level to assist with problems plaguing an ultra-secret project.  When he arrives, Felix is amazed to see that A.I.M. is trying to build a massive Madbomb of their own! 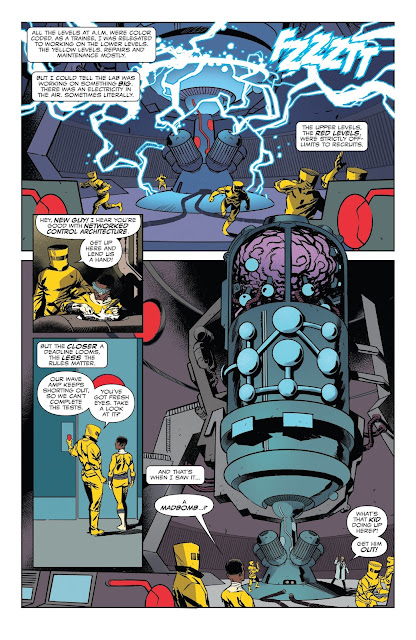 As he joins the Madbomb project, Felix slowly begins to realize that by helping to create a weapon of mass destruction, his talents aren't helping make a better future for anyone, and that his whole life is now built on lies.  He decides to sabotage the Madbomb, but is caught in the act. 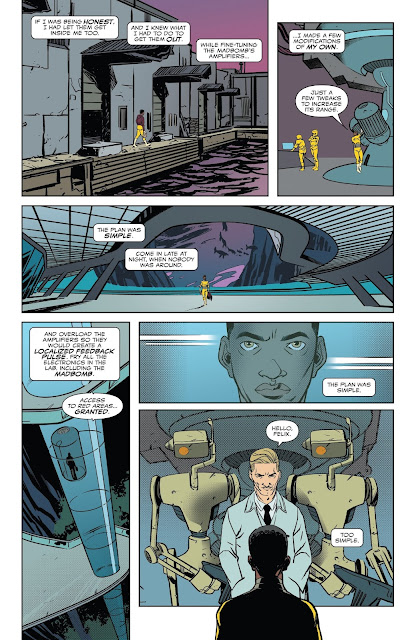 After Felix is informed that he knows too much and has to die, he desperately activates a pulse meant to destroy the Madbomb, but his unfinished device is stronger than he expected and the resulting effect is enough to attract the attention of Captain America, The Falcon, and Iron Man, who quickly make their way to the hidden A.I.M. base and attack! 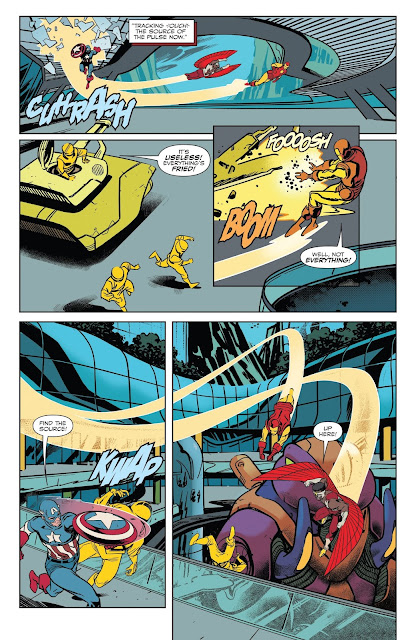 During the battle, the Madbomb is destroyed and Felix is rescued by the superheroes.  He informs them that he is the one who disabled the bomb and Iron Man is impressed by the young man's technical know-how.  A few days later, Felix is surprised to receive a job offer from Stark Industries. 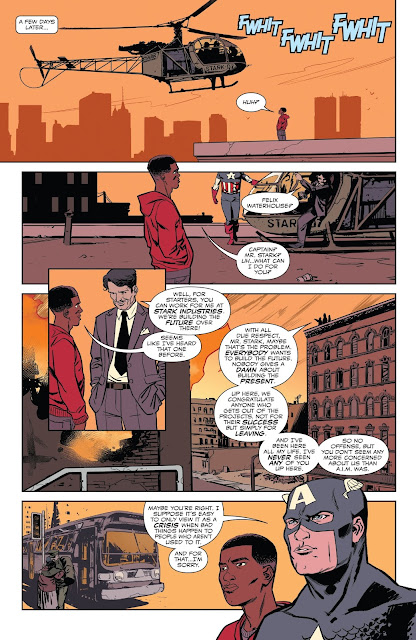 In the end, Captain America and The Falcon help with the long-overdue reconstruction of Felix's devastated neighborhood after realizing that simply defeating a problem and then ignoring what comes afterward doesn't solve anything and sometimes makes things worse. 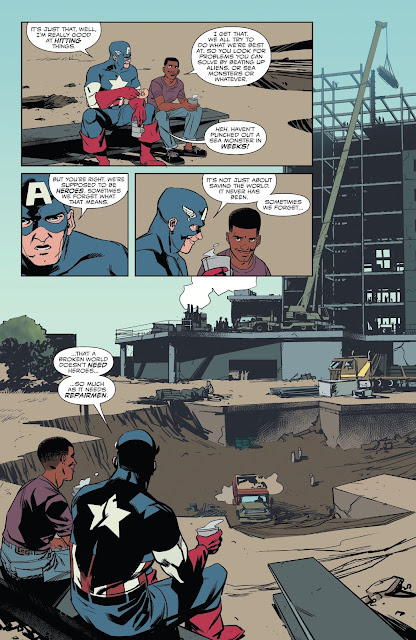 Let's look at this from the angle of it being the story of a young man seduced by Hydra with Captain America and friends in a supporting role.  On THAT side of the coin, it's not a bad story.  I do like the way that it looks into the aftermath of the original Madbomb attack from Captain America #193, so as an epilogue to "Madbomb" I think this story actually does a good job.

Felix is a pretty interesting character. Seeing him put his morals aside to try to make things better, realizing that he's been seduced by lies, and finally trying to make things right is a pretty good character arc.  Yeah, it's been done before and done better, but sometimes a little "If it ain't broke, don't fix it" is okay if it's done well.  Here, it's done well.

The story DOES get a little preachy toward the end as we get a healthy dose of "Superhero is forced to realize that the little people count too" moralizing.  It's not QUITE to the point of being cringeworthy, but it's pretty close to that edge.

So this story works as a sequel to Madbomb that digs in and takes a close look at the consequences of the original 1976 story from the perspective of one individual. . .but as a "Marvels" expansion, not so much.

Marvels put the reader in the shoes of an ordinary person.  It made us feel the awe and wonder of seeing a man fly, or throw a car.  This story has none of the magic of Marvels and makes Captain America feel small and unimpressive as a teenager teaches him a lesson.  Maybe it was the writer's intention to make Captain America seem small instead of the powerful force rushing through an ordinary world he appeared as in Marvels. . . 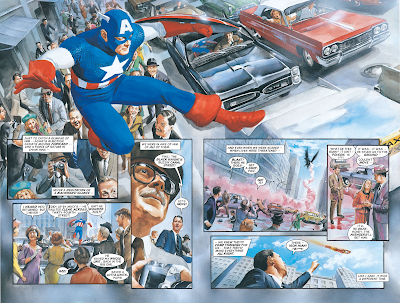 I said at the top that I wasn't going to get political, but it seems to me like Captain America being humbled by a black teenager about what parts of the city got repaired first after an attack has a definite whiff of recent social justice trends to it.  It makes Captain America less of a hero and more of a representative of "privilege".  This perspective might not sit well with some readers.

In my introduction I said that this one shot had some pretty heavy work cut out for it.  Not only is it expected to add to a fan favorite story that doesn't really need anything added to it, but it ALSO is trying to be an epilogue to ANOTHER fan favorite story.
As an epilogue to "Madbomb" it works pretty well as it tells a story set in the aftermath of the original attack and after the heroes turn their attention elsewhere.  It has an interesting main character and follows a pretty good arc for a one issue story.
BUT. . .
As a "Marvels" supplement, it doesn't stick the landing.  Where Marvels is a timeless story about the awe and wonder of superhumans in the ordinary world, THIS story is firmly rooted in this particular moment in time by reducing Captain America to a representative of "privilege" that needs to be taught a lesson in social justice by the teenage protagonist.
It's not a BAD story.  But it certainly won't sit well with many Captain America fans that prefer to see the Star Spangled Avenger painted in a more heroic light.  If you are one of those fans. . .I'd say steer clear.  But if you are of the mind that there's some room in your superhero stories for a little social justice agenda, then definitely check this one out.
Up Next. . .
More Captain America!
Steve Rogers is America's only "Super Soldier", but he hasn't been tested in the field yet.  Join me as I take a look at the story of Captain America's first N azi-Bustin' combat mission in 2011's Captain America: Fighting Avenger one shot.  SPOILER: Everything goes wrong!
Be there or be square!
- read more
1 2 3 4 5 6...32 Previous >>