It's that special time of the year when you can go to a "pop-up" seasonal costume store set up in an abandoned Best Buy building and find skimpy "Maid" costumes in both child sizes AND XXXL!
Not sure which one is scarier.
BUT. . .
we aren't here to discuss the hilariously depressing commercialism of "Scary Christmas", we're here to talk about comic books!  As promised in my last post, I'm giving DC's Halloween Specials a break as I try to rinse the mediocre flavor of superhero-themed Halloween stories out of my mouth with some actual horror comics.

The comic series at hand is a bit of a strange bird. . .it's a direct sequel to a horror movie that came out in 1989, which makes me wonder just who was asking for it almost 30 years down the road.  Also, the movie itself isn't that well-regarded, and is pretty much considered to be greatly inferior to the original.

The movie I'm speaking of is The Fly II, sequel to the David Cronenberg 1986 masterpiece of creepy body horror, The Fly.  The Fly is considered one of the greatest horror movies made (with an extremely solid 92% on Rotten Tomatoes), with Jeff Goldblum turning in one of his best performances playing a brilliant scientist who accidentally rewrites his DNA by splicing it with a housefly during teleportation experiments.
Over the course of the movie, he slowly transforms into a mutated creature with full awareness of his horrific fate until he is mercy killed at the end by his lover as the transformation becomes complete.

The sequel to The Fly was not as well regarded.  The story involved the son of the doomed scientist from the original being raised from birth in a laboratory by the corporation that was funding the teleportation experiments that killed his father.  Martin (the son, played by Eric Stoltz) discovers the truth about what happened to his father as the same thing starts happening to him and he begins transforming.
Eventually, by combining his flawed DNA with that of the evil head scientist in the teleporter his father built, Martin saves himself, but dooms the head scientist to live as a helpless monstrosity.

None of the original stars or Cronenberg were involved, and movie audiences shrugged and moved on. . .leaving The Fly II as a sort of forgotten relic of the 80's.  Judging by the extremely weak 27% Rotten Tomatoes rating and ho-hum reviews, I'm pretty confident in saying that The Fly 2 was a sequel that nobody really wanted.

I managed to rope my daughter into watching both of these movies with me over the weekend, and am able to confirm that The Fly is a masterpiece of 80's horror, practical effects, and reliable Jeff Goldblum scenery-chewing that somehow managed to capture my daughter's attention for the whole movie, while The Fly II is. . .pretty good.
I didn't find it as bad as a lot of reviews made it sound.  My daughter defaulted to occasional glances at the screen between whatever was more interesting on her phone about halfway through.

So why am I spending so much time on the movies when it's the comics we're here for?

Because I have to warn you coming in that The Fly: Outbreak is a true and direct sequel to The Fly II.  If you don't have at least a sketch in mind of the story of the original movies, these comics will make absolutely NO sense to anyone reading them. . .which is kind of a strange direction to go, but to tell the truth, I sort of like it.
As far as I'm aware, this is the first time I've ever read an ACTUAL sequel to a movie in comic form.  Not a reboot or re-imagining, but a SEQUEL to an almost-forgotten movie from 30 years ago.

But enough background.  Let's do this!

THE BOOK OF TRANSGENESIS 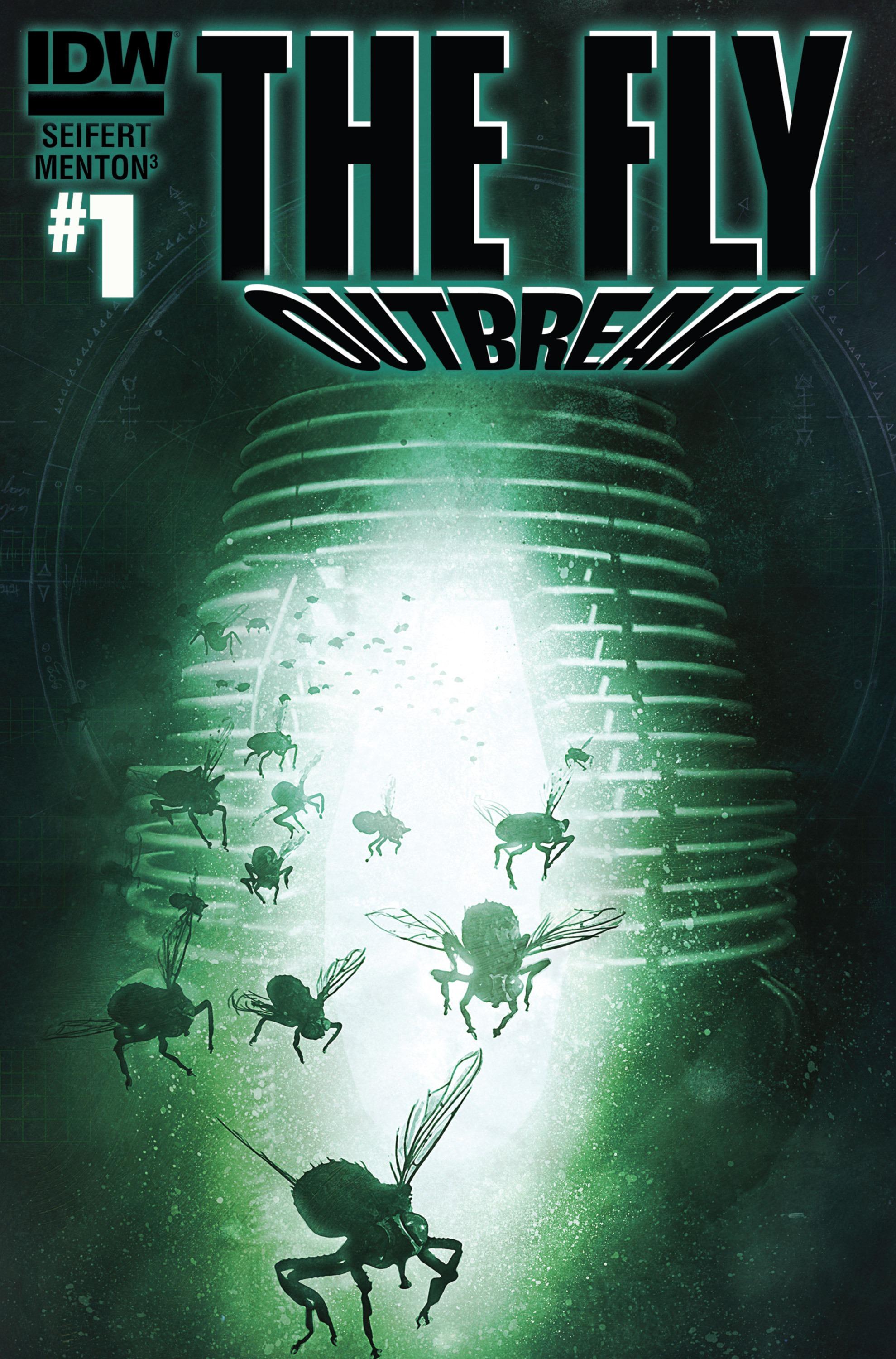 Set a few years after The Fly II, Martin Brundle is now the head scientist at Bartok industries.  During his continued experiments on Anton Bartok attempting to cure the transgenic disease Brundle purposely infected him with (that turned him into a hideous monstrosity with the mind of a human trapped inside), Brundle accidentally triggers a new phase of transformation that enables Bartok to escape captivity.
As the deranged hybrid human/fly tries to force Brundle into confessing that he infected Bartok to save himself, he is gunned down and killed. . .but during the battle, several employees and Martin are splashed with potentially infectious body fluids, leading to the entire staff being forced into quarantine.
Hmmmm. . .Okay.  Not a bad start.
Like I said in the intro above, this is a direct sequel to The Fly II, so it drops the reader right in a couple of years after the movie.  There's SOME exposition, but if you aren't familiar with the movies, it's not nearly enough.  This is NOT a comic friendly to new readers.
That said. . .
As someone familiar with the movies, I liked this first issue quite a bit BECAUSE it doesn't hold your hand and just gets right into the story without a lot of backtracking.  I like that Martin Brundle has dedicated his superior intellect to saving his former enemy from the fate that Brundle himself doomed him to.  I like that once again, Martin's ill-advised meddling has just made things worse.  I like that they moved the narrative along with the natural progression of the transgenic disease into something that can be contracted by humans through contact with fluids.  I also like the art a lot.
The artist is definitely of the Ben Templesmith school of mixing extreme detail and sketchiness together, highlighted by beautiful coloring for a dark and moody look that is perfect for a story steeped in dark tragedy brought on by man trying to tinker with nature.  The artist has perfectly captured the likeness of Eric Stoltz and Daphne Zuniga (the leads on Fly II, who are now married), which helps establish this as a sequel to Fly II in a big way. 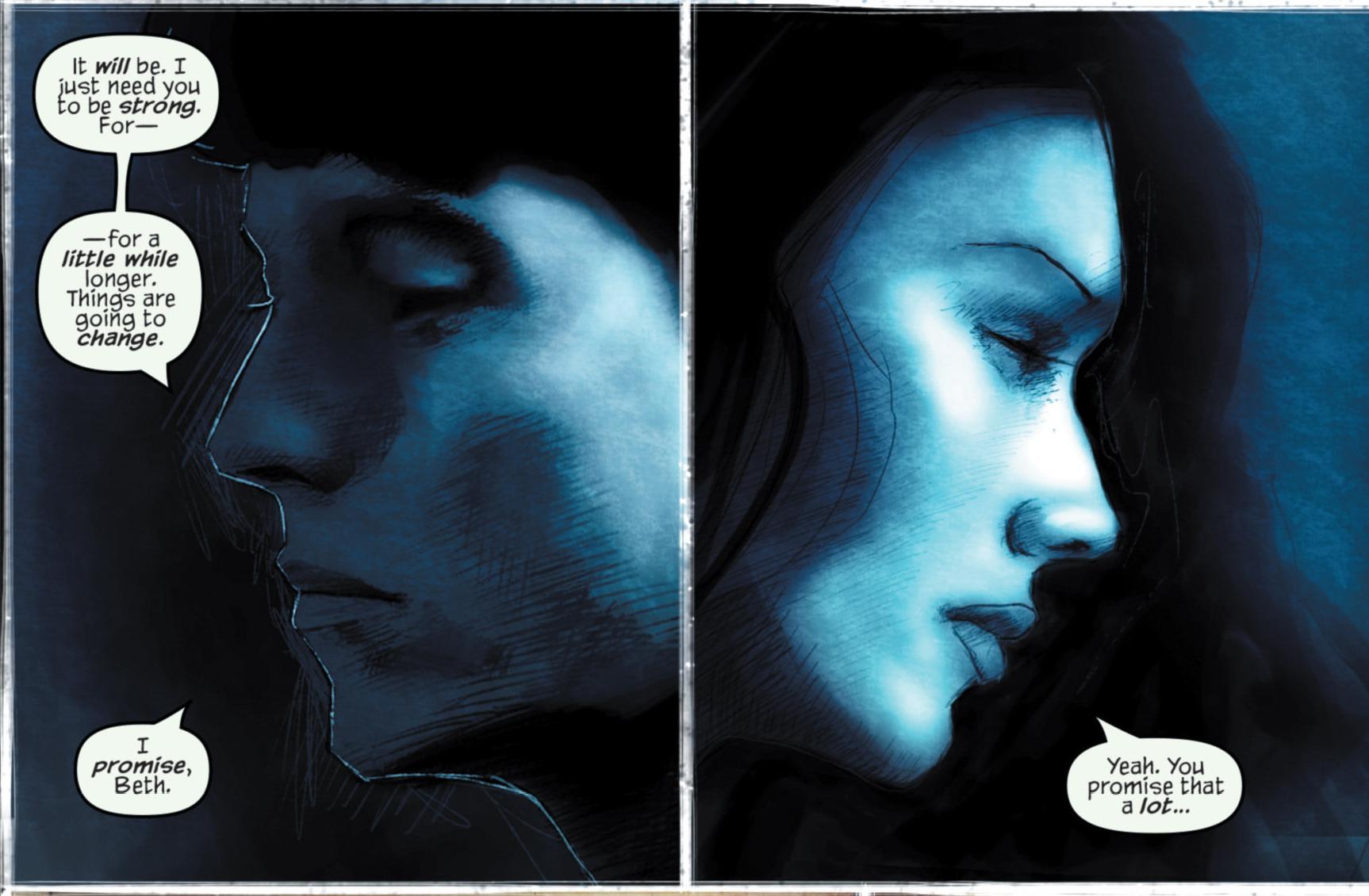 BUT. . .
Even though there's a lot to like about this first issue, there's one thing that I didn't like at all. In the original movies, Seth and Martin Brundle (and Anton Bartok at the end of Fly II) were transformed into twisted, lumpy, oozing monstrosities with the last remaining vestiges of humanity barely reflected in their eyes.  In Outbreak, Bartok transforms into a sleek flying creature that resembles a stereotypical alien more than a fate worse than death. . . 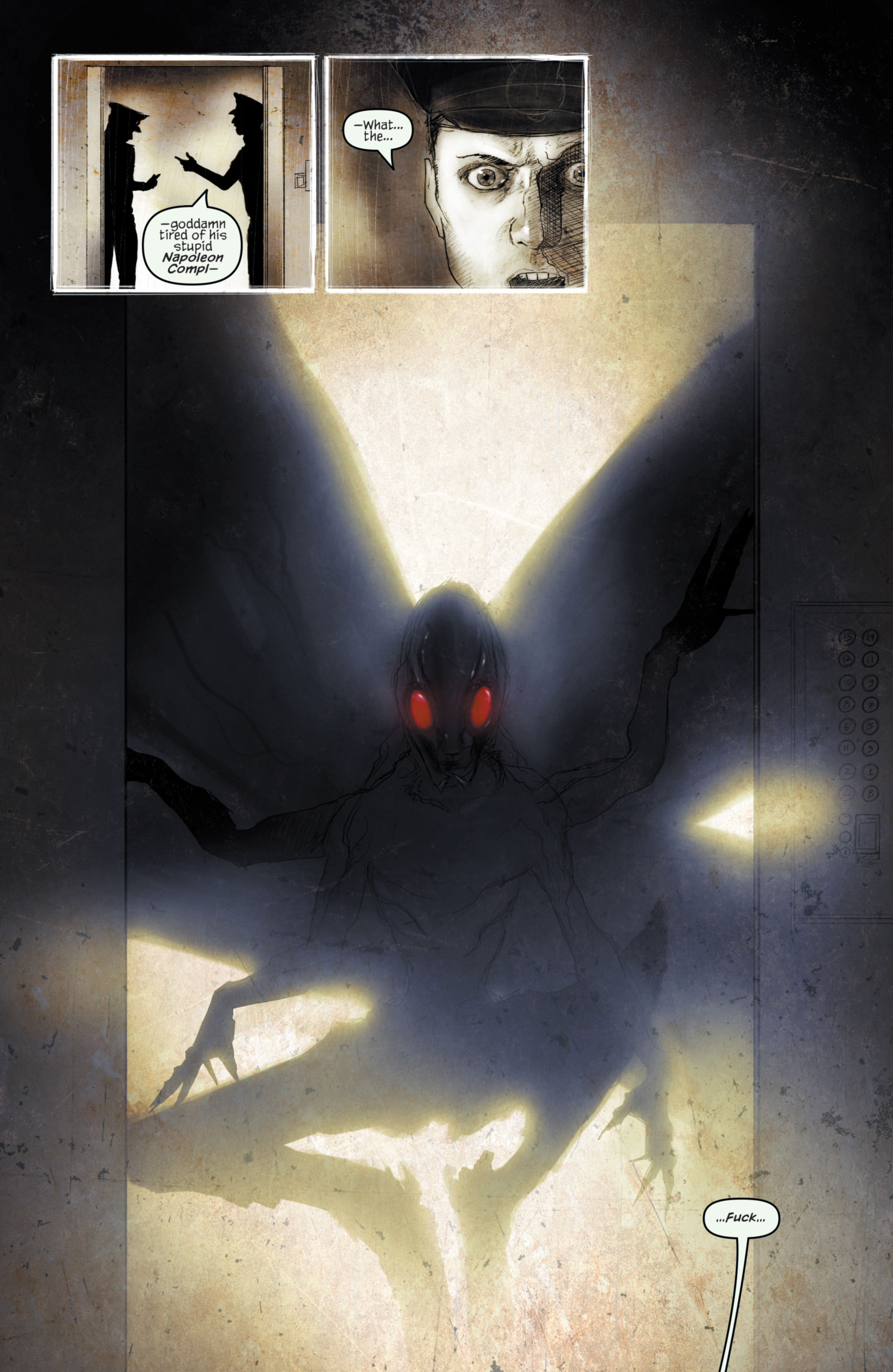 This is a pretty jarring departure from what was established in the movies as to what happens when human and fly DNA are spliced.  It can be sort of explained by the new experiments that Martin has been trying, but I still found it unwelcome. Despite the unnecessary redesign of the hybrid, I found this first issue to be off to a great start.  It's mostly setup, but it's nicely done and makes me want to jump right into the next issue. 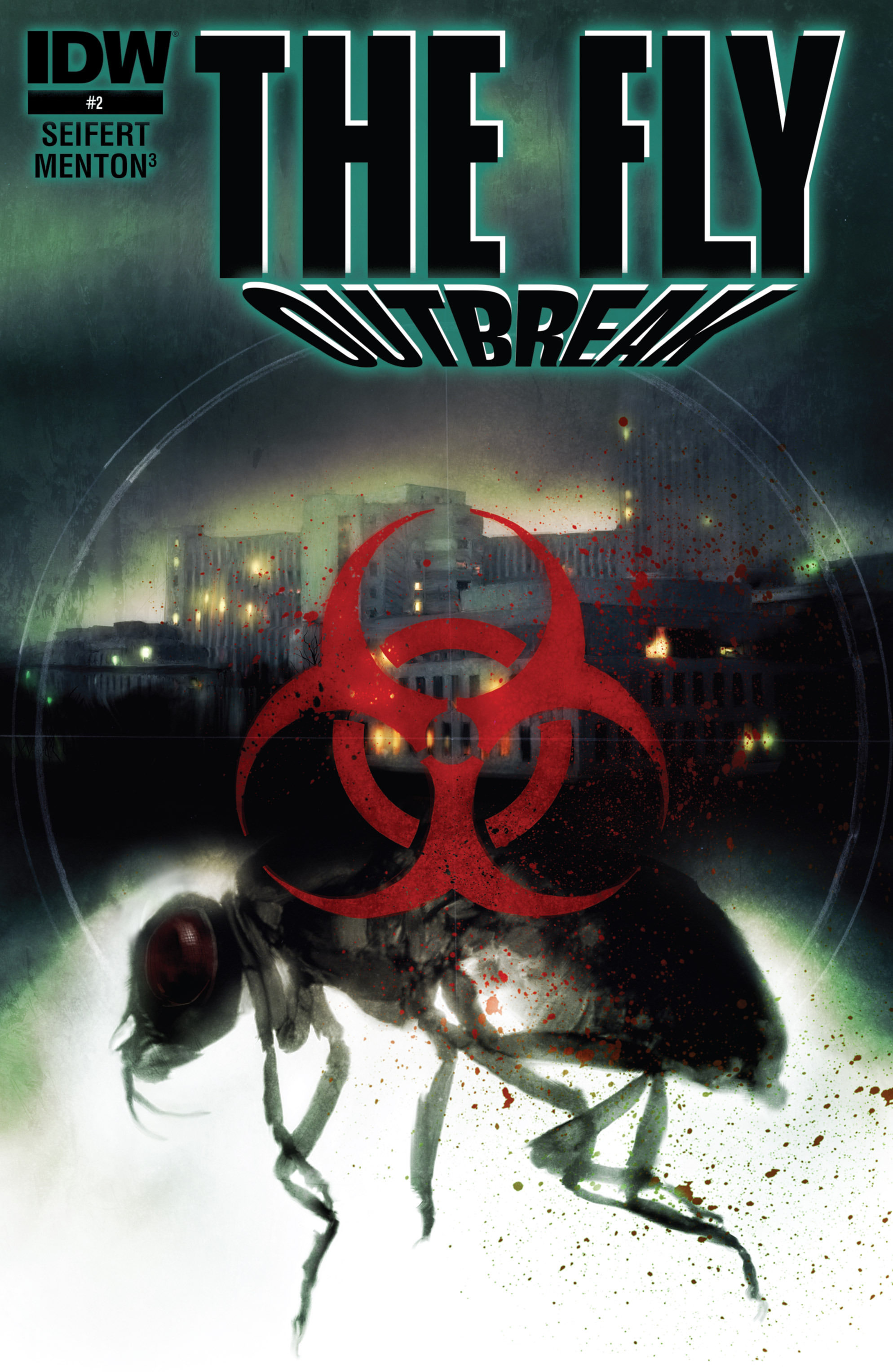