Welcome to another "Retro Review" edition of Longbox Junk, where I take a closer look at some of the more "valuable" single issues in my collection instead of my usual discount box fare.
This time out, I take a trip back to 1973 and take a look at what many comic fans consider to be the best version of one of my favorite characters. . .the dark avenger known as The Shadow! 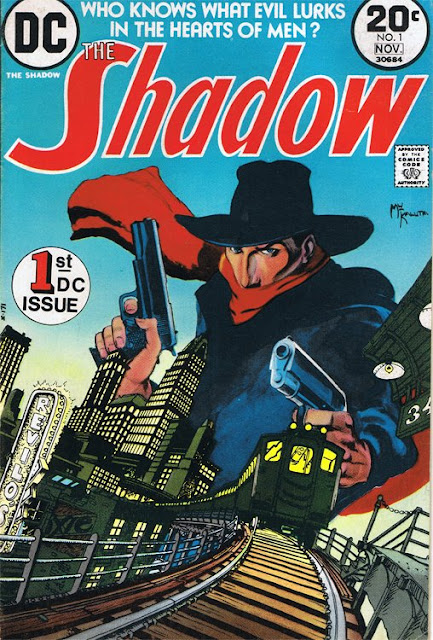 DC (1973)
SCRIPT: Dennis (Denny) O'Neal
PENCILS:  Michael Kaluta
COVER:  Michael Kaluta
As usual with these retro reviews, part of my fun in doing them is finding out about the background of the comic at hand, so indulge me a paragraph or three as I outline some of what I learned.
So what we have here is the first issue of a short-lived (12 issue) DC run on the popular pulp character, The Shadow.  He'd been around since the 1930's, but had fallen a bit out of the public eye by the 1970's, thanks in part to a disastrous Archie Comics run with the character in the mid 1960's where they tried to turn The Shadow into a superhero complete with green and purple tights and cape.  I don't have any issues of this run, but from what I understand, it's pretty much regarded as the very definition of Longbox Junk.
Thankfully, DC decided they wanted to stay true to the pulp roots of the character that inspired one of their most popular superheroes of all time, Batman.  DC originally hired Jim Steranko as artist, but Steranko wanted to write the book as well.
DC had already decided that they wanted Denny O'Neil writing The Shadow, so they passed on Steranko and passed the art to Bernie Wrightson, who was quickly becoming a superstar artist with his work on Swamp Thing.  Unfortunately, Wrightson quickly realized that he couldn't handle two ongoing series at the same time, so DC passed the art to Mike Kaluta.
And so that's how we ended up with the perfect combination of writer and artist to provide the world with what I consider possibly one of the greatest first issues of ANY series I've ever read.
Okay. . .I guess I'm getting a little ahead of myself.  Let's start at the beginning.
I have to admit that I'm a little prejudiced in favor of this particular comic.  My wife (who isn't a comic fan) bought this issue for me about 10 years ago for Father's Day.  She found a BEAUTIFUL copy (I'd grade it 8.5) in an antique store and bought it for ten lousy bucks just because she knew I liked old comics and she liked the cover.
I normally tell her not to try to buy comics for me, but this ONE time she hit a home run!  For 10 years, that awesome cover has greeted me every time I walk into my man-cave.  It was the first comic cover I put up on the "Wall O' Fame" and the only one that hasn't moved. 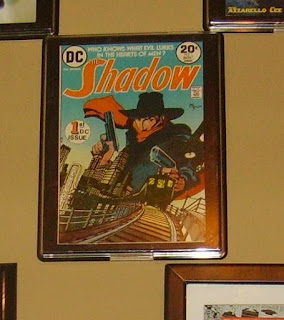 Anyway. . .there it is.  Front and center.  What more can I say about that fantastic Kaluta cover other than I consider it to be one of the greatest comic book covers of all, and I never get tired of seeing it.
But enough of that.  I'm not here to review a cover.  Let's get inside this thing!
So the story goes like this:
While breaking up a gang of thugs in Brooklyn, The Shadow comes into possession of a coded note that sends him following a trail of clues. . .first to an exclusive nightclub, where as his alter ego Lamont Cranston, he overhears rumors of a gathering small army of criminals.
From there he has one of his agents, Harry Vincent, stake out an area of town where Vincent witnesses a gang of criminals attack a police transport and free the prisoners.  During the gunfight, Vincent is taken prisoner, but The Shadow manages to track down his location.
After defeating the gangsters holding Vincent, The Shadow interrogates one and discovers further clues to an expanding criminal plot which lead him to visit a Wall Street financier in the guise of Lamont Cranston the next day and discovering that a large shipment of worn currency to be destroyed is leaving New York for Washington D.C. that night. . .the final piece of the puzzle.
Later that night, as the shipment of currency leaves in armored cars and guarded by U.S. army troops, a group of thugs wait to blow up the George Washington Bridge and send the convoy into the water.  The Shadow arrives by gyrocopter to stop the plot to blow the bridge up, and then destroys a submarine that was waiting below to salvage the sunken armored cars and escape with the money undetected.
But those were just the hirelings there to carry out the plan.  The mastermind was still at large, and The Shadow doesn't do things halfway.  The Shadow captures the fleeing Wall Street financier who was one of the only ones who knew the route the currency convoy was taking, and during a struggle, forces him to shoot himself.
The weed of crime bears bitter fruit! The End.
All in all it's a pretty simple story, but one that moves at a nice steady pace and is very well written by Denny O'Neil. . .with spot on dialogue and great pulp/ noir lines like, "In the distance a foghorn moans -- Or is it the cry of something lost, something damned?"
I see a lot of comics from the 70's that are definitely products of their time with slang and cultural attitudes that clearly mark when the comic was written just as surely as the date on the inside cover.  O'Neil's dark and atmospheric writing on The Shadow evokes the pre-WWII era without a hint of the 1970's and makes even a simple story like "The Doom Puzzle" a true pleasure to read.
And then there's the art.
Just as with the writing, It's usually not hard for me to tell when a comic came out just by looking at the art.  It always sort of stretches my suspension of comic book disbelief when I'm reading a WWII comic and the characters have shaggy haircuts straight from 1975.  There isn't a hint of the 70's in this comic.  Kaluta's art is dark, moody, and perfectly evokes the era that the characters inhabit.
Every page of this comic oozes character and atmosphere in such a way that perfectly compliments O'Neil's pulp/noir writing and really makes me just want to re-read the comic again, even though I just put it down 15 minutes ago to write this review.  The art on this comic stands the test of time and I'd definitely call it superior to many modern artists on the racks right now. 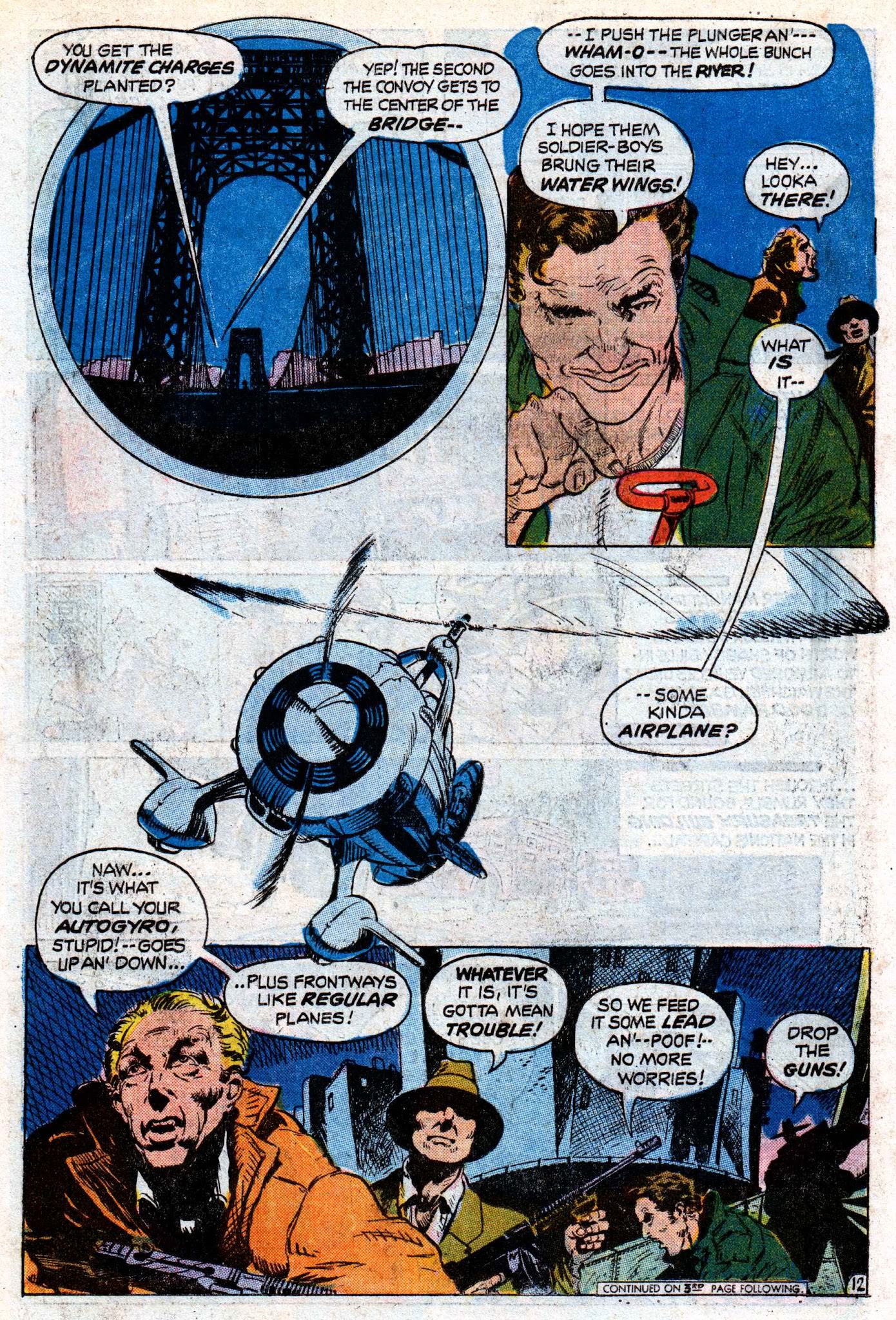 I really like Kaluta's unusual panel style!
BUT. . .
No comic is perfect.  This one comes close, but not quite all the way.  The main problem with this otherwise fantastic piece of comic art is that it is NOT new reader friendly.  Who The Shadow is or what his powers or motivations are is not explained except in the most vague and oblique ways.
Who his agents are, why they serve him, and how they came to be his agents isn't even touched on, beyond their names and the fact that they take his orders without question.  As a huge fan of The Shadow, I know all these things. . .but if one knows nothing about the character this is a pretty lousy introduction.
It seems to be fully expected that whoever is reading this comic is already a fan of The Shadow.  Newcomers need not apply.  I don't have any other issues of this run, so I don't know if The Shadow and his Agents are expanded on in later issues, but I wonder if this cold opening and unfriendliness to new readers might have something to do with the run being quite short.  If so, then that's a shame.
CONCLUSION
Overall, despite not being very friendly to new readers at all, I can easily say that for fans of The Shadow, this is a comic that MUST be in your collection.  It has a fairly simple story, but the obvious love of the character in both O'Neil's writing and Kaluta's art elevates this single issue into something great.  From the fantastic cover to the final panel, The Shadow #1 is a true example of comics as art.
Up Next. . .
It's October, so how about some spooky fun?
Halloween one-shots!  Be there or be square!
- read more
1 2 3 4 5 6...33 Previous >>