Welcome to Longbox Junk, where you can find more comic reviews that you never asked for than you could ever ask for!

I recently decided to take Longbox Junk back to what makes it stand out from other comic review sites and review a whole series from issue one to issue done (and all the issue fun in between).  I have to admit that I did bite off a big ol' mouthful of comics by deciding on the sixty-issue run of Marc Spector: Moon Knight, but here I am, still chuggin' along and halfway done!

Welcome back to Longbox Junk, the place to find more comic reviews that you never asked for than you could ever ask for!  Read it again. . .it DOES make sense!

Every now and then I like to take a step back from my usual bargain bin fare and shine the spotlight on some of the older and more "valuable" comics I own.  I crank up the old Longbox Junk paper time machine and see what's going on in the Bronze, Silver, and Golden Age corners of my collection.  It's a nice little occasional diversion from the dollar box.

The comic at hand is a very recent addition to my collection.  As of this writing, I just got it last week for my birthday from my comic-lovin' daughter.  She took quiet notice of me admiring that sweet cover every time we hit the comic shop for our weekly fix of four color fun over the past year or so that it's been hanging up among the "premium" comics behind the counter.  It was a great birthday present!
BUT. . .
I can't actually read it.  See, I had to cheat a little on this particular Longbox Junk Retro Review because the copy I have is encased in a plastic prison.  Slabbed and graded at a very nice 8.0. I might one day break it free, but for now it's "cover only" for my actual copy of this comic.
What that means is that the pristine pictures to follow are from the digital version of the comic.  Like I said, I had to cheat a little and go online to do this review. . .but with a cover like that, I just HAD to see what the story was!
SO. . .
Disclaimers aside, let's see what this comic has to offer.  Step into the paper time machine with me and travel back to 1967 when Stan Lee and Jack Kirby were hard at work on "The World's Greatest Comic Magazine"  Ready?  Let's do it!
FANTASTIC FOUR #58
Marvel (1967) 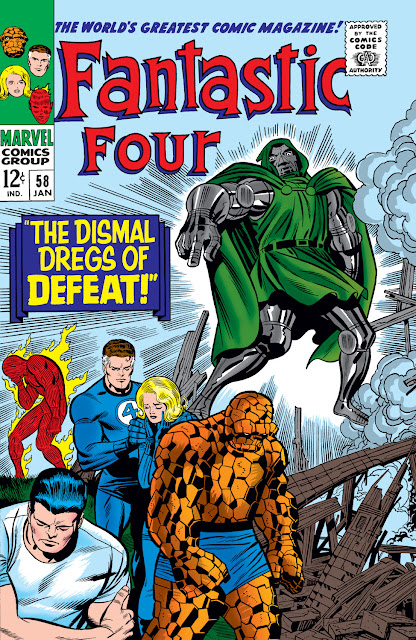 THE DISMAL DREGS OF DEFEAT!
SCRIPT: Stan Lee
PENCILS: Jack Kirby
INKS: Joe Sinnott
COLORS: Stan Goldberg
COVER: Jack Kirby
THE COVER:
The cover of this comic is what caught my eye and convinced my daughter to buy it for me, so let's linger here for a moment.  Awwwwwwwwwww. . .Yeah!  Just look at that.  Nice.  VERY nice.  Do I really need to say much about this Silver Age spinner rack eye-catcher?  It's just so. . .great.  The colors, the composition. . .there's nothing I don't like about this cover! THIS is the kind of cover that makes me want a comic book.  Let's move on before I just sit here all day. . .
THE STORY:
Our story begins with Mr. Fantastic, The Invisible Woman, and The Thing on top of the Baxter Building, where the lightning flashes of a strange thunderstorm reveal images of their enemy, Doctor Doom! 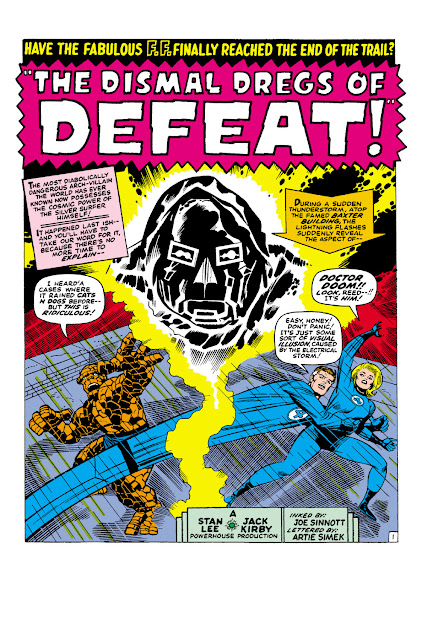 Little do our heroes know that (in the previous issue) Doctor Doom has vanquished and imprisoned the mighty Silver Surfer and somehow stolen his cosmic powers.  Doom was using the storm as a test of his new powers.  Satisfied, he begins planning to destroy the Fantastic Four!

Later that day, Reed and Sue Richards (AKA Mr. Fantastic and the Invisible Woman) leave for a quiet weekend alone together at a cottage they've rented upstate, leaving Ben Grimm (AKA The Thing) to keep an eye on things at the Baxter Building.  But shortly after the newlywed Richards couple leave, Doctor Doom attacks! 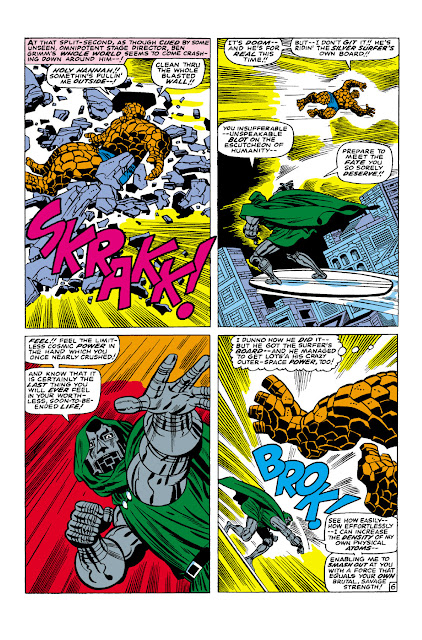 The Thing puts up a good fight, but his brute strength is no match for Doom's new cosmic powers, and Doom stands victorious!  The Thing is placed in a state of suspended animation. . .helpless and unable to speak or move. 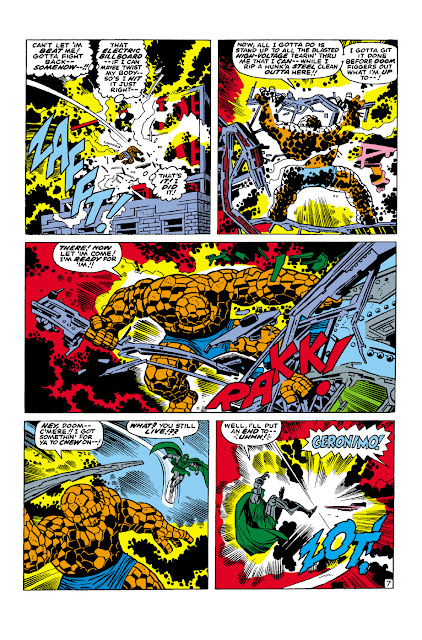 IN THE MEANTIME. . .
Johnny Storm (AKA The Human Torch), Wyatt Wingfoot (AKA normal human supporting character), and the giant teleporting dog called Lockjaw (Who belongs to the Inhumans, but is temporarily providing the Fantastic Four Deus Ex Machina travel support) suddenly appear in New York.
The stop is an unintended interruption to their continued attempts to breach the Negative Zone barrier trapping the Inhumans so that Torch can be reunited with his new Inhuman girlfriend, Crystal. . .But THAT'S another story!
Torch and Wingfoot don't understand why Lockjaw has brought them to New York when there's more important business to tend to, until they notice the gaping hole in the side of the Baxter Building!  Johnny Storm quickly investigates. . . 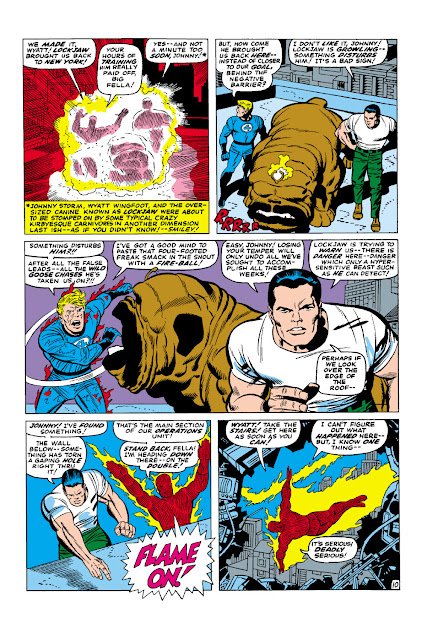 AT THAT VERY MOMENT. . .
At the quiet upstate cottage Reed and Sue Richards are spending the weekend at, the couple's mild bickering over Reed's inability to stop tinkering with machines long enough to have a weenie roast with his new wife (Hey-O! But seriously. . .it's just a cookout) is rudely interrupted by Doctor Doom! 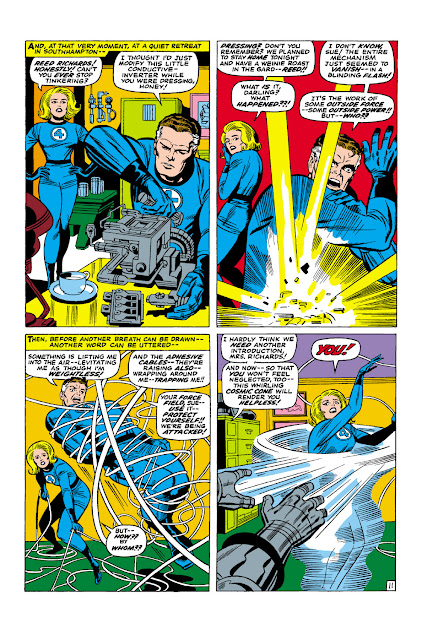 Using his stolen cosmic powers, Doctor Doom not only takes Mr. Fantastic and the Invisible Woman by surprise, he is able to easily counteract their abilities.  As Reed and Sue Richards fight for their lives against Doom.
Back in New York City, The Human Torch has discovered the Thing.  He remembers a device in Reed's lab that might work to bring his friend out of suspended animation.  He decides that's a job for Wyatt Wingfoot as he rushes to Reed and Sue's rental cabin to warn them that something's going on. 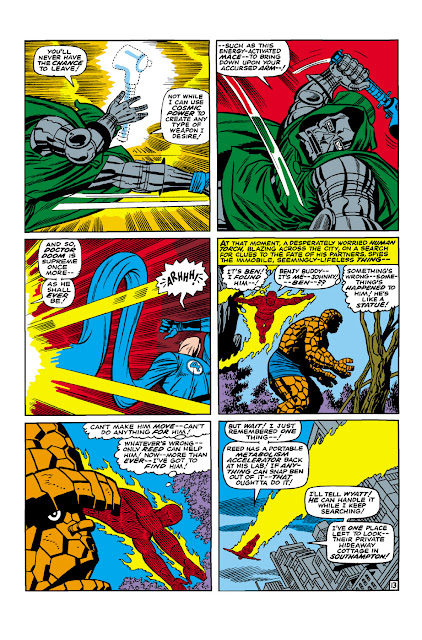 The Human Torch arrives in time to hear Doom ranting about his new powers and the havoc he's going to be able to wreak.  Johnny rushes in on the attack, heroically intending to sacrifice himself to give Reed and Sue Richards time to escape and come up with a plan to defeat Doom. 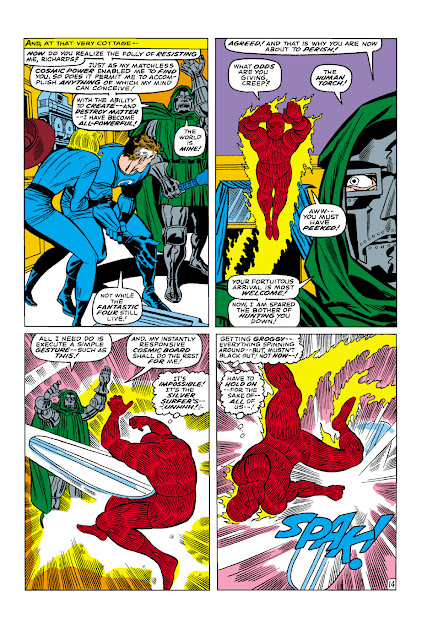 Torch quickly realizes he's outmatched by Doom's new powers, and in a last-ditch effort, causes a massive explosion that Reed and Sue barely escape.  Meanwhile, back in New York City, Wyatt Wingfoot uses Reed Richards' "Metabolism Accelerator" on The Thing, bringing him out of suspended animation. . . 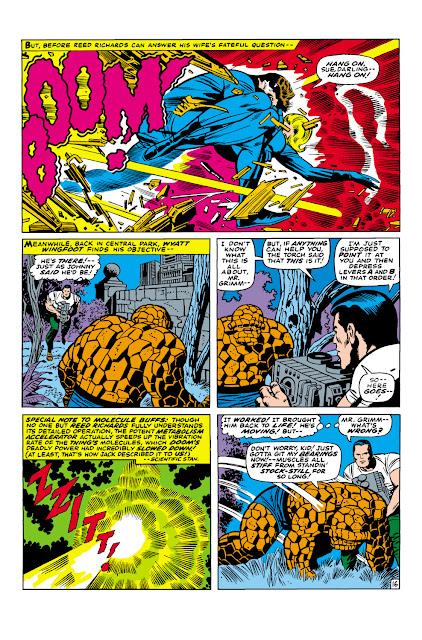 Back at the cottage, Johnny Storm is defeated and frozen by Doom. . .but somehow manages to summon the strength to release one last massive blast of fire to free himself! 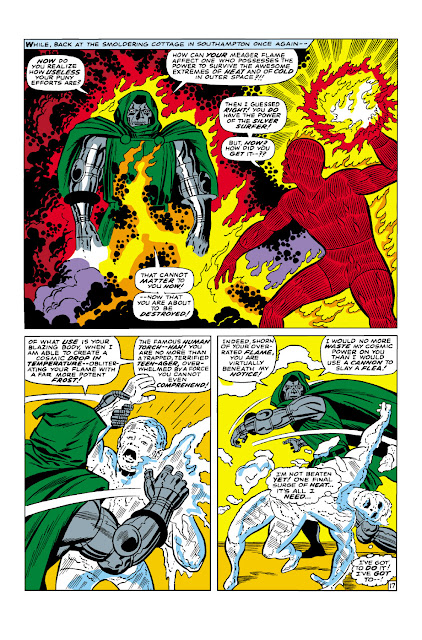 As The Human Torch escapes to regain his strength, The Thing and Wyatt Wingfoot arrive to join the battle!  Wingfoot is armed with Reed's experimental "Anti Grav Disrupter", and he wastes no time in using it on Doom, causing a massive explosion but seemingly having no effect on Doctor Doom! 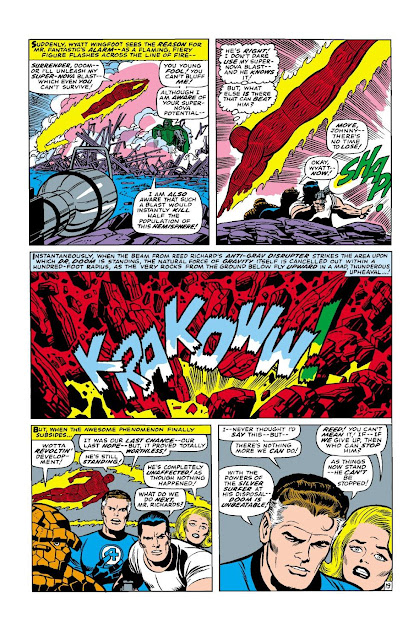 Reed Richards realizes that there's nothing they can do against Doom with the stolen powers of the Silver Surfer and orders his team to stand down and surrender.  The Fantastic Four have been beaten!
Doom gloats that Richards has made the right choice, and although he WAS planning on destroying the heroes, a more fitting punishment will be to let them live, knowing that they no longer even matter to Doom.  As the mocking villain makes his exit, Reed lets the rest of the team know that he was just buying time and will never give up! 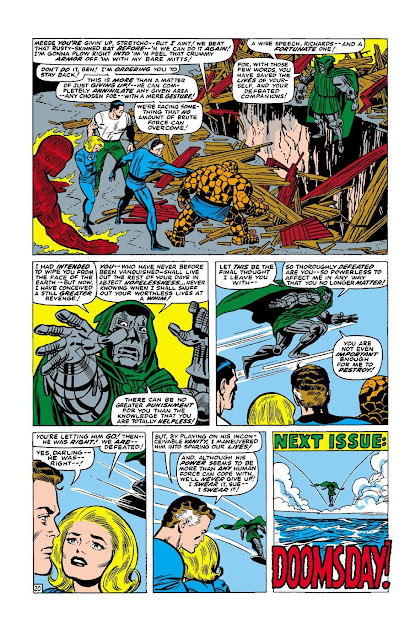 Doctor Doom.  The name alone says it all.

There's no denying that Doctor Doom is one of the most iconic villains in comic books.  From his great costume design to his over-the-top third person megalomaniac dialogue, Victor Von Doom is a classic character that has stood the test of time.

I have to admit that when I bought this mini bundled as 3 issues for a measly five bucks from the bargain bin of a local comic shop, I had no idea the story involved Doctor Doom.  The cover of the first issue on top of the bundle looks more like a grungy post-apocalyptic story than something featuring a Marvel Universe mainstay bad guy.

Well. . .what we have here IS a grungy post-apocalyptic story.  But it ALSO features Doctor Doom in a way that I've never seen him before.  Three issues for five bucks makes this odd little mini the definition of Longbox Junk. . .but is it GOOD Longbox Junk?  Let's find out!