Welcome to Longbox Junk, the place to find more comic reviews you never asked for than you could ever ask for! Read it again. . .it DOES make sense!
Recently, I've thrown out a few reviews of comics that are the bread-and-butter bargain box fillers. . .and there WILL be more to come.  But right now, it's flea market and yard sale season here in Utah and I've been having a pretty good run of luck finding some great older comics.
And so, I got to thinking. . .
If comics from Malibu, Image, Marvel's New Universe, and the like are some of the comics you're practically guaranteed to find while Longbox Junkin' through the cheap bins at your local comic shop. . .what are some of the comics you're most likely to find at the flea market, or at an estate sale, or at an antique/junk store?  In other words, what is the "Longbox Junk" of comics found OUTSIDE of the comic shop?
Three words: Dell Four Color
Dell's Four Color comics have to be THE most common comics I've come across outside of comic shops.  The series ran from 1939 to 1962, for an astounding 1354 issues. . .the record for the most issues produced of an American comic book.  Four Color hit 1000 issues LONG before Action Comics managed to get to that milestone.  Not bad for a series that didn't have any regular characters or continuity!
Four Color isn't so much a "series" as it is a vast collection of one-shots.  Each one can be read on its own, in any order.  They cover a VERY wide range of subjects. . .heavy on licensed properties popular at the time, and Disney properties in particular.  You can find anything from westerns to detective stories, to funny animals, to adaptations of movies and novels. . .and everything in between!
And, like I said above, the great thing about Four Color comics are that they are easy to find in the wild.  I have about FIFTY of them in my collection!  Even better than the relative ease of finding them is the rock bottom prices most of them are sold at.  I see some pretty high "values" in online price guides for Four Color comics. . .but I've never paid more than twenty bucks for one.
What I'm trying to say is that if you're Longbox Junkin' out in the wild outside the comic shop, you WILL find Four Color comics, and you WILL be able to afford issues going back into the Golden Age of comics.  Perfect example: The issue at hand is from 1958, in decent condition, and I bought it at a flea market for FIVE BUCKS.
ANYWAY. . .
Let's strap into the Longbox Junk time machine and take a trip back to 1958, when westerns were king and comics cost a dime!  Ready? LET'S DO THIS!

TALES OF THE PONY EXPRESS 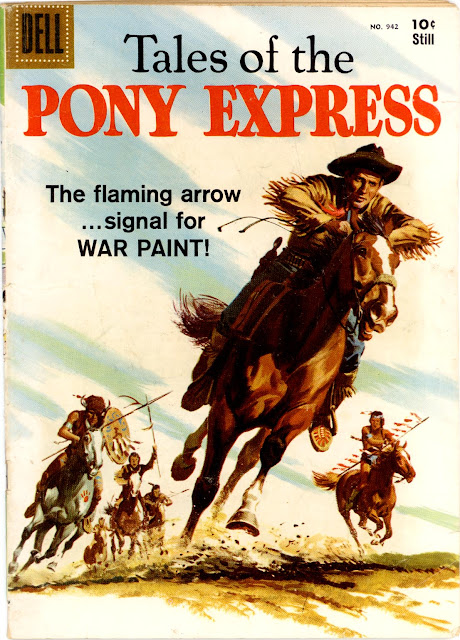 COVER: Sam Savitt
THE COVER:
I'll tell you true, folks.  To ME, that cover alone is worth the five bucks I paid for this comic!  Just look at it! It's FULL of motion, action, and detail!  This stunning painting of a Pony Express rider running for his life from a band of pursuing Indians isn't just a great comic cover, it's a great piece of western art, period.  Let's get inside!
THE STORIES:
Plenty of Western action in here for your one thin dime! Two full-length comic adventures, along with two one pagers on the inside front and back covers.  You can't buy THAT for four bucks these days!
Let's check out each one in their own turn, shall we?  WE SHALL!
ALERT FOR WAR PAINT
(Inside Front Cover)
SCRIPT: ?
PENCILS: Nicholas Firfires
Basically a short little lesson in the meaning of various Native American war paints.  It's actually pretty  interesting, but there's not much more here than an appetizer.  The whole thing is scanned below. 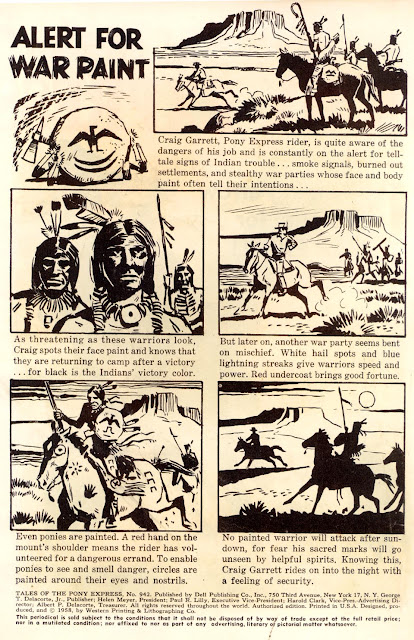 WAR PAINT
SCRIPT: Eric Friewald & Robert Schaefer
PENCILS: Nicholas Firfires
THE STORY:
Pony Express rider Craig Garrett is given the task of buying new horses for the Express, as well as being trusted with the $5000 in government gold allocated for the purpose.  Little does he know that word of the gold being held at an isolated Express station has gotten out and a band of outlaws have attacked and stolen the funds, making it look like it was an Indian attack! 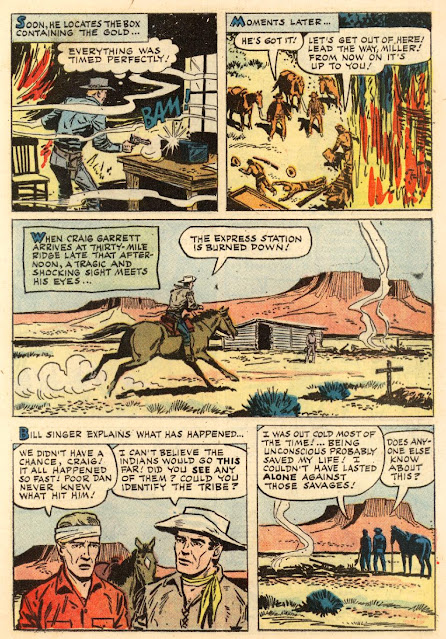 Garrett isn't convinced that Indians were behind the attack, though.  He follows clues and believes he's found proof, but must keep on the trail and prove his theory before the army mobilizes against the Indians and it's full-on war!
He and another express rider follow clues to the town of Liberty Junction, but lose the trail.  Garrett discovers that a man named Miller had been talking about the Express Station attack before it happened, and Garrett is back on the trail!
The two Express riders head to Indian Land outside of town after hearing that Miller is a friend of the local tribe. They don't receive a warm welcome, but Garrett convinces the warriors that confront them  that he's there to prevent a war and needs to see their Chief. . . 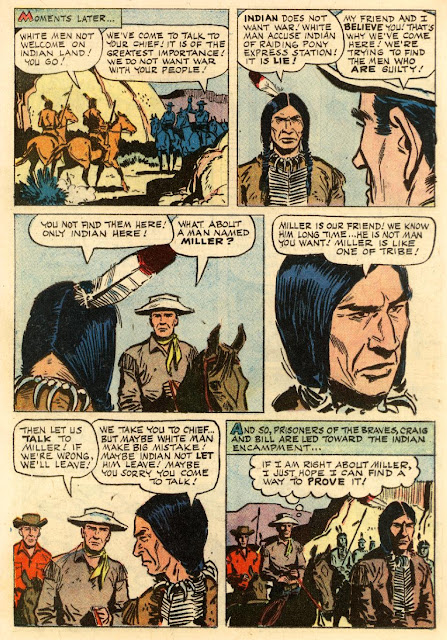 The tribe's Chief is doubtful that a friend of the tribe like Miller would use them to hide such a crime as murder and theft, and even to try and pin the blame on the tribe.  But after overhearing Miller secretly talking to his two co-conspirators, he quickly realizes that Garrett is telling the truth.
Knowing they've been found out, Miller and his friends make their escape from the camp. Garrett, his partner, and an Indian brave set off in hot pursuit! 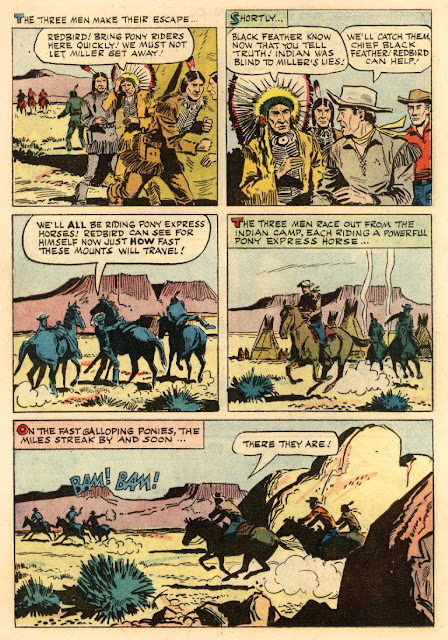 After a short gun battle, the criminal gang is taken down.  At the end of it all, the gold is recovered, a war is prevented, and the Pony Express has made some new Indian friends.  All's well that ends well. 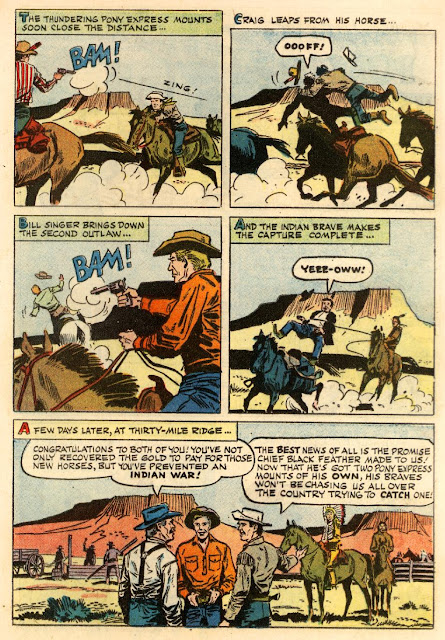 The End.
THE REVIEW:
Okay. . .not bad!  I liked that this story followed a trail just a little bit out of the ordinary, giving the reader equal parts investigation and action.  It wasn't all just rootin' tootin' shootin' like you find in a lot of these older western comics.
I can see that there was some actual thought and effort put into this story, which is a little surprising because if you read a lot of old westerns like I do, you KNOW that there's quite a bit of similarity across the board.
The art was also surprisingly good for Four Color.  Normally, what you get is a fantastic cover and art inside that hopefully is at least serviceable, but usually is borderline bad.  The art here is actually pretty good.  Not great, but solid and better than expected.
So overall a well-done story backed up by decent art.  Not bad.  I usually come into these Four Color comics with pretty low expectations, but this time I was pleasantly surprised.  Let's check out the second story and see what we get.
NEXT!
DESERT AMBUSH
SCRIPT: Eric Friewald & Robert Schaefer
PENCILS: Nicholas Firfires
THE STORY:
Pony Express rider Craig Garrett is tricked into an ambush by two men while riding a dangerous route across the Nevada desert.  When he wakes up from the attack, he realizes that the men didn't steal any of the mail, just Garrett's prize horse, Colonel. 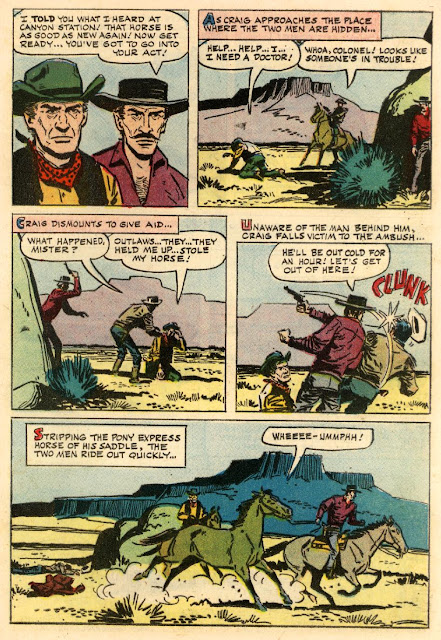 After recovering from the attack for a few days at a nearby Express Station, Garrett takes a leave of absence.  He's seen that there's a big horse race taking place in Carson City in four days, and suspects that he was ambushed because of his horse's reputation for being one of the finest in the West. . .and that the culprits will be entering Colonel in the race. 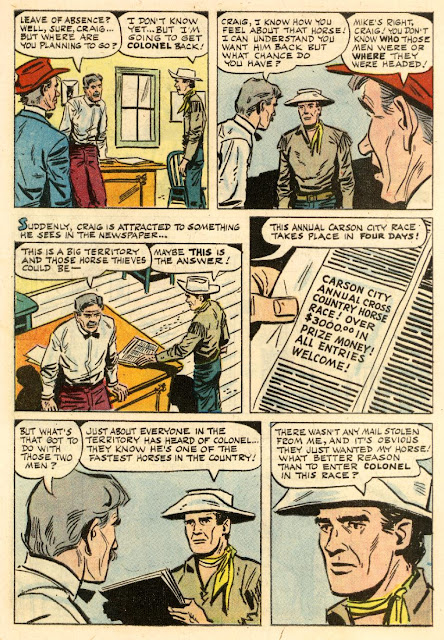 Arriving in Carson City, Garrett meets a man named Len Miller, who was entered in the big race, but has to forfeit his entry fee because his horse has taken ill.  Miller offers Garrett the hospitality of his home while the Express rider tries to locate his own horse. 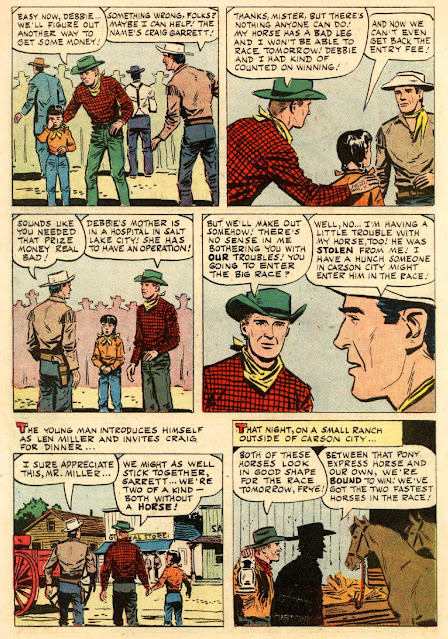 The next morning, before the cross country race begins, Garrett and Miller spot the two men who ambushed Garrett a few days before.  They've got Colonel, and just as Garrett thought, have him entered into the race.  Garrett confronts the men.  They deny his accusations and the sheriff is called.
Garrett proves his ownership of Colonel by giving the horse commands that he obeys.  That's enough proof for the Sheriff and the two thieves are taken away to jail.  In thanks for Miller's hospitality, Garrett lets him ride Colonel in the big race. 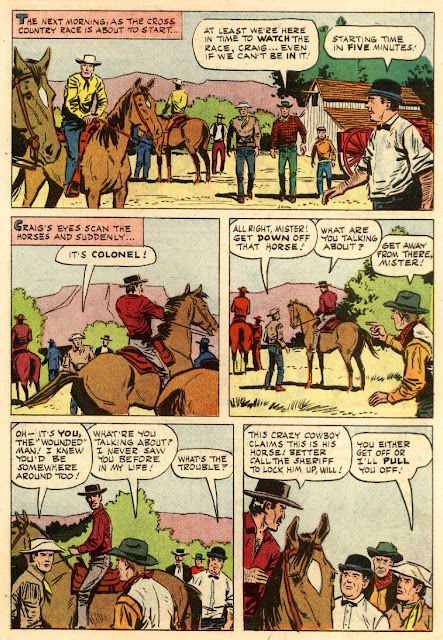 Riding the powerful Pony Express horse, Miller easily wins the race.  With the prize money, he can now afford an operation that his wife needs.  Garrett has his prize horse back again.  All's well that ends well. 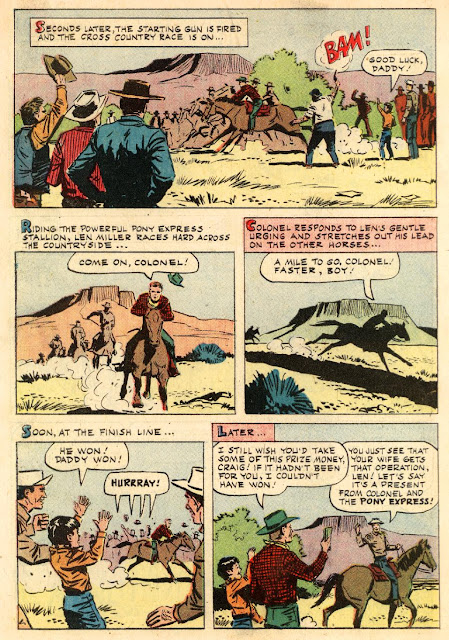 The End.
THE REVIEW:
With the same creative team as the first story, it's no surprise that this one is pretty solid as well.  Once again, there's less focus on gunplay than one would expect from a western comic from the 1950s.  As a matter of fact, there's NO gunplay at all in this story! There's a little bit of fist fighting to be had in a couple of places, but this is definitely a story that breaks my expectations for a Golden Age western comic!  I like that.  I like it a lot!
Overall, this was a well-written little nugget of western action that steps outside the boundaries of what I normally expect.  It's backed up with some very solid art, and I found it to be a pretty enjoyable read.
Let's wrap this up!
TRAILS THAT CROSS
(Inside Back Cover)
SCRIPT: ?
PENCILS: Nicholas Firfires
Another one pager to finish this comic off like the one on the inside front cover that started the show.  Like the opener, there's not much to this little story. . .a tale of two Pony Express riders passing each other while they sleep in the saddle.  If the one inside the front cover was an appetizer, this one makes for a nice little dessert.  The whole thing is scanned below. . . 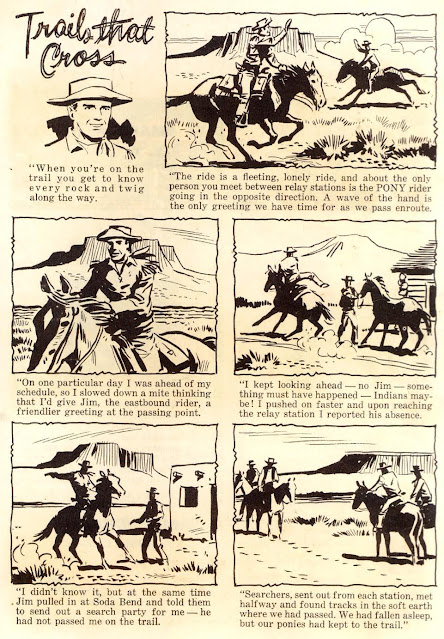 One of the things I love about doing these Longbox Junk "Retro Reviews" is knowing that I'm writing what will probably be the ONLY review of this comic that has been, or ever will be, written.  I feel that by scanning the pages and describing the contents, I'm doing a small part to add to the overall comic knowledge out there, even if nobody asked me to.
Hopefully, I don't sound like I'm not just tooting my own horn, and some of what I've put out here in this review will be useful or informative for those interested in Golden Age western comics like this one.
THAT SAID. . .
I found this comic to be quite a surprise.  Both of the stories focused less on gunplay and more on narrative than I expected coming in.  There's plenty of action, don't get me wrong, but that action is a different sort than I'm used to when I open up a Golden Age western comic.
The stories seemed less like boilerplate, and more like some thought and effort had been put into them.  The artwork was also surprisingly solid for a Four Color comic.  The combination of the two gave me some timeless western action that still reads well even after 64 years!
I'm not sure how rare this comic is, but I can certainly recommend it to anyone who enjoys a good western story that steps slightly outside the often-repeated scripts that most Golden Age western comics stick to.
Up Next. . .
Back to the bargain bin!
If you've ever gone digging through a dollar box, I can practically guarantee you've seen a "Glory" comic.  So let's take a look at Image's version of Wonder Woman, shall we?  WE SHALL!
Be there or be square!
- read more
1 2 3 4 5 6...32 Previous >>