Welcome to Longbox Junk, where I just keep on writing comic reviews even though nobody asked me to!

October is done!  Halloween is here, and that means the end of this year's Longbox Junk Halloween Horror party!  Not too bad this year. . .I got 16 spooky reviews done.  I think that's more than I did all this summer!
I hope you enjoyed reading the Halloween Horror entries as much as I enjoyed writing them.  It's nice to just relax with a spooky comic book, good OR bad. . .but now it's time to get back to Longbox Junk business as usual.
BUT WAIT!
Before I get back into digging random stuff out of the bargain bins, how about one more Halloween Horror review?  Most of you won't see this until the 1st because I tend to post things late at night, but I AM writing it at 11 p.m. Halloween night, so it counts. . .BECAUSE I SAY IT COUNTS!
One more for the road. . .Let's do it! 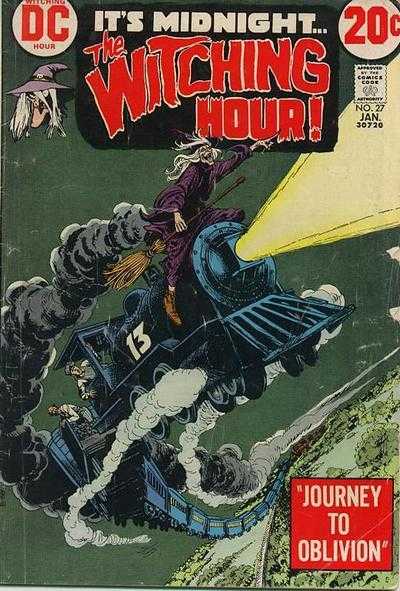 COVER: Nick Cardy
THE COVER:
What a great Halloween cover. . .courtesy of the late, great Nick Cardy!  Can it get ANY more Halloween than a witch straddling Locomotive #13 while she guides it flying into the gloomy grey sky?  This may not be the greatest comic cover in general, but as far as HALLOWEEN covers go, it's definitely a winner.
Let's get inside this thing!
THE STORIES:
FOUR stories in here for your two thin dimes!  That's one of the things I love about older comics. . .good or bad, they're STUFFED with four color fun!  These days, you pay four bucks for a little part of ONE story in a comic.  But THAT'S a rant for another day!  Let's check out these stories. . .
THE BODIES AT 13 RAVENWOOD LANE
SCRIPT:  Carl Wessler
PENCILS:  Alfredo Alcala
INKS: Alfredo Alcala
The tenants at Mrs. Haggerty's boarding house begin to disappear one by one, leaving only their best clothes behind.  The killer is eventually revealed to be Mr. Duncan, a dealer in used clothes.
He is caught by the police digging a grave in the yard, but as he unearths the other graves there is only old clothes.  Duncan is committed to an insane asylum. Were the murders real, or the delusions of a madman? 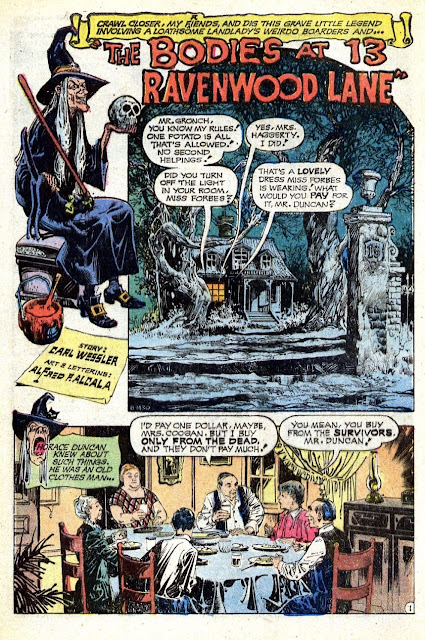 THE REVIEW:
This story is a little confusing to me.  It seems almost like two stories mashed together.  But maybe confusion is what the writer intended from a story that may or may not be the delusion of an insane man.
BUT. . .
While the story is a bit of a headscratcher, the art is simply fantastic!  For MY money, Alfredo Alcala is one of the great, unsung comic artists of the Bronze Age!  His finely detailed work can elevate even the most mundane story into a feast for the eyes.  Just LOOK at the opening page I scanned above.  The shading, the detail. . .just SO great!
NEXT!
WAKE UP AND DREAM!
SCRIPT:  Gerry Conway & Sal Amendola
PENCILS: Sal Amendola
INKS: Sal Amendola
We follow a man named Larry through his miserable life.  Larry is a bit of a clumsy loser, and to make things worse, he is plagued by a recurring nightmare of falling toward some unknown darkness.  Eventually, the dream drives him to madness and an overdose of sleeping pills.
But when Larry wakes up, he finds himself the ruler of a kingdom on an alien world.  A mighty warrior married to a beautiful queen.  He has been in a coma for the past several years after being poisoned but is now awakened and ready to take his rightful place as King.
Which life is real? 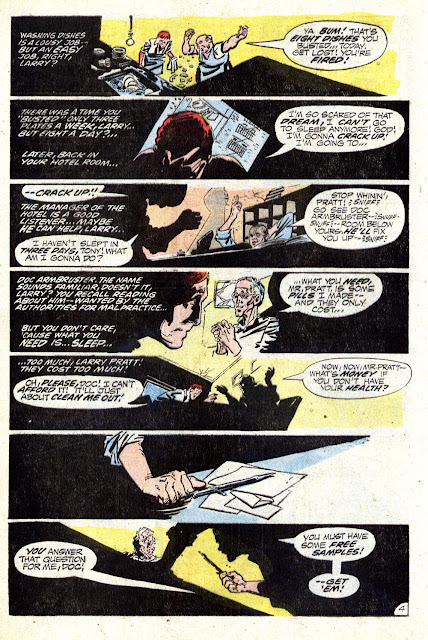 THE REVIEW:
Not a bad little story.  Maybe a bit thin, but interesting.  The "twist" was a bit of a surprise, which is a GOOD thing when you've read as many of these anthologies as I have.
But, like the first story, the art is the REAL star of the show here.  It's a less realistic and more stylized and experimental art style than Alcala's, but very visually interesting.  It makes great use of odd angles, different panel structures, and deep shadows.  So once again, interesting art elevates the story a bit more than one would think.  Nicely done.
NEXT!
FRIGHTMARE!
SCRIPT:  Carl Wessler
PENCILS:  Win Mortimer
INKS: Win Mortimer
Stan and Lionel are competing for the same Vice President spot at their company, but while Stan chooses to let his work speak for itself, Lionel decides sabotage is the best way to the position.  After Lionel destroys an important file, the despondent Stan is hit by a bus.  As he dies, he swears vengeance on Lionel, promising to inhabit the body of someone close to him in order to destroy him.
With Stan out of the way, Lionel gains the coveted Executive position, but as the weeks pass, strange accidents keep happening.  Lionel eventually becomes convinced that Stan is possessing the body of the company's President, and his behavior get him fired.  As he leaves the building, he falls down an elevator shaft to his death. . .realizing at the last moment that Stan had possessed HIS body. 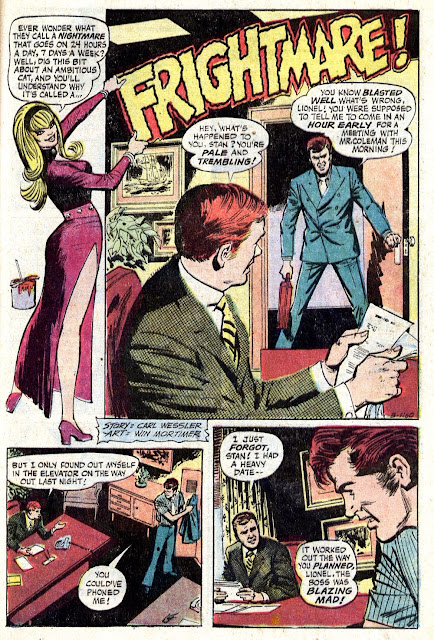 THE REVIEW:
This story feels more like filler than anything else.  It's just not that interesting.  A pretty by the numbers "ghost revenge" tale with an obvious "twist" ending.  It's not a BAD story, it's just not really engaging.
Unfortunately, the great art that elevated the first two stories isn't to be found here.  The art is serviceable, in a workmanlike way.  It illustrates the events of the story but doesn't try much harder than that.  Like the story, the art isn't necessarily BAD, it's just not very engaging.
AND FINALLY. . .
JOURNEY TO OBLIVION
SCRIPT:  Carl Wessler
PENCILS:  Gerry Talaoc
INKS: Gerry Talaoc
Richard Dolan is a chronic complainer.  Nothing makes him happy.  When he finds himself on a mysterious train crowded with passengers heading for an unknown destination, his constant complaints wear on the nerves of those around him.
When the train arrives at its destination, Richard is unimpressed with the bright, sunny weather and the overwhelming happiness of everyone he meets.  He decides he wants to return to the dreary streets of the city that he's at least familiar with.  He secretly boards the train again as it pulls out of the station to return.
In the end, we see that Dolan was in the hospital, presumed dead, but now fighting for his life.  The train had taken him to Paradise, but Dolan would rather be happy complaining about his life than anything else. 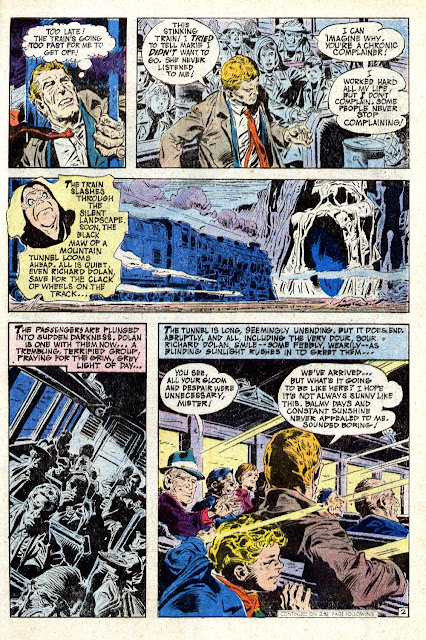 THE REVIEW:
Not a bad little story.  It's a well-written character study with a "twist" ending that I didn't see coming, so yeah. . .a pretty good read.  I actually found this story to be the best of the batch.  I've been known to be a bit of a complainer myself, so I can sort of relate.
As far as the art goes, it's pretty good.  I like the dark inks and realism, but it's missing the supreme detail of Alcala's art in the first story and the experimental style of Amendola in the second.  It's not quite as workmanlike and uninspired as Mortimer's in the third, though.
Overall, a pretty good story.

A sort of mixed bag for this last bit of Halloween Horror fun.  Two so-so stories saved by fantastic artwork up front. A very workmanlike story that feels like filler in the third slot.  A good story with decent art to finish things up.
All in all, a pretty good issue.  Even the "worst" story in here wasn't actually BAD.  More like just sort of . . .there.  I've definitely seen worse.  To be fair, I've also seen better, but for a nice Halloween read I can certainly recommend this issue to anyone just looking for a pretty good "twist ending" style comic book to read.
If you're a fan of Bronze Age artwork, then I say definitely give the two opening stories a look.  Alfredo Alcala is quickly becoming one of my favorite unsung Bronze Age artists.  Any time I see a comic with some of his distinctive style of art now, I buy it!  So far, my favorite work by Alcala is in Weird Western Tales (#16-17), but anything by Alcala is worth a look in MY book.
And there you have it.  One last bit of Longbox Junk Halloween Horror fun for 2022.  Not a bad way to end things for this year.
Up Next. . .
Back to Longbox Junk business as usual when I return to the review of all 19 issues of the King Conan run from 1980 that I put off for the Halloween fun.
Be there or be square!
- read more
1 2 3 4 5 6...33 Previous >>