Welcome to Longbox Junk, where I write comic reviews that nobody asked for!

What's that you say?
I promised a King Conan series review and the title CLEARLY says nothing about King Conan?
Fear not, Conan fans! That series review is in the pipeline, just delayed a bit.  I completely forgot that October is upon us.  October isn't Conan season. . .October is Longbox Junk HALLOWEEN HORROR season!
That's right, it's that time of year when I take a look at the spooky side of comics, and I try to pack as many of them as I can into the month of October!  So, settle back, turn down the lights, and let's have some Halloween fun!
I'm starting off this Longbox Junk spookathon with something brand spankin' new!  So, before we begin. . .
THIS IS A REVIEW OF A COMIC THAT IS ON THE STANDS RIGHT NOW.  THIS IS YOUR SPOILER WARNING!
Okay? Everybody in that's staying in? Let's do this! 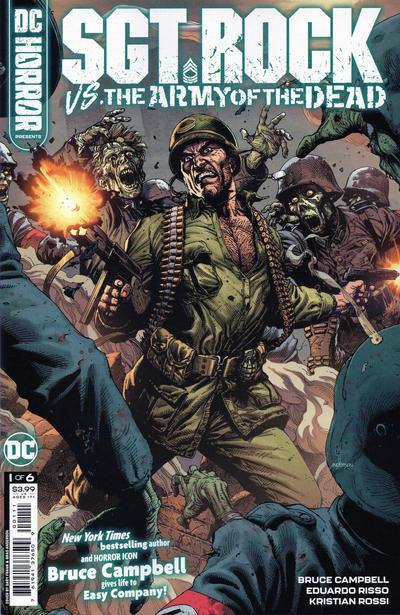 COVER: Gary Frank
NO TIME LIKE THE PRESENT
SCRIPT: Bruce Campbell
PENCILS: Eduardo Risso
INKS: Eduardo Risso
THE COVER:
Ah. . .There's the good stuff! My favorite WWII infantry dog captured in a freeze frame moment of action against a horde of the undead!  It's super-detailed and full of action.  This is the kind of thing that makes me want to buy a comic book!  Let's get inside. . .
THE STORY:
BERLIN: 1944.  As the Allies move in on the German capital, A-dolf H-itler becomes more and more desperate to turn things back around.  Operation: Regeneration is put into action.  A mad experiment in returning dead N-azi soldiers back to life, using a combination of chemicals and electricity. 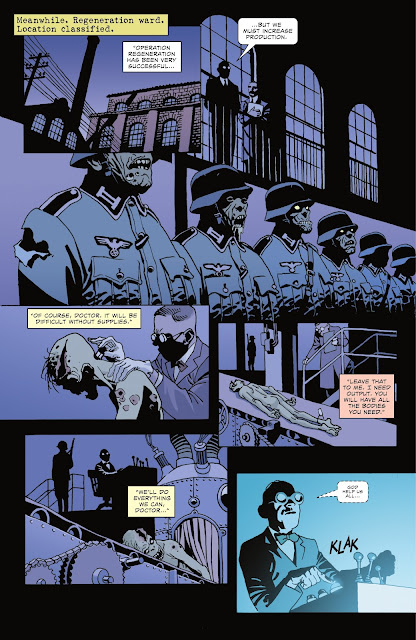 After an allied patrol is decimated by seemingly unstoppable German soldiers, Sgt. Rock and Easy Company are summoned to HQ for a special mission. . .infiltrate deep into hotly contested enemy territory, find where the re-animated soldiers are being created, find one Doctor Morell (the head of the project), and do what Easy Company does best.
To aid in the mission, Easy Company is issued some experimental equipment, including thermal imaging scopes, and are shown one of the re-animated soldiers. . .but during the briefing, the undead German breaks free and attacks! 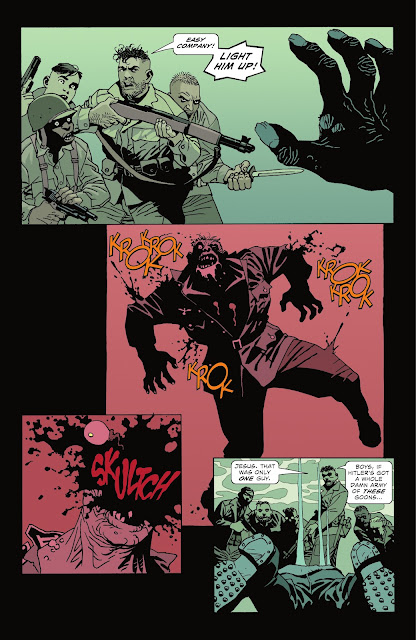 Easy Company quickly discovers that the process doesn't just bring the dead back to life but gives them superhuman strength and ability to resist damage.  It takes the combined firepower of the whole squad to bring just the ONE undead German down!
After seeing what it took to destroy the escaped creature, Rock isn't very confident about their chances on this one. . .
To be continued.
THE REVIEW:
I LOVED seeing this issue on the stands!  Sgt. Rock is one of my favorite comic characters of all, and it's been a while since DC gave us Rock fans anything new to sink our teeth into.  And then, it's a horror mashup with Sgt. Rock versus N-azi zombies? Sign me up!
This first issue is mostly setup for what's to come.  Most of the page space is taken up with various expository briefings, except for a bit of action bookending the issue with the zombie attack on the allied patrol at the front, and the captured zombie attacking at the end.
Fortunately, in such a dialogue-heavy issue, Bruce Campbell does a good job at capturing a military feel and flavor in the character speech.  Unfortunately, he doesn't spend any time at all on introducing Rock and the rogues of Easy Company, sort of leaving new readers out of the loop and aiming this story at established Sgt. Rock fans.  That said. . .there's 5 more issues, so a little more background may be coming.
On the art side of things, I'm a BIG fan of Eduardo Risso.  Since I read 100 Bullets, I've gladly bought just about anything with his name attached to it.  I love his clean, dark artwork, his spare backgrounds, and his supremely expressive faces.  That said. . .I'm not entirely sure he's the BEST artist choice for a Sgt. Rock story.
Don't get me wrong. . .the art isn't bad by any means.  Risso is a great artist and there are certainly some great moments in this issue.  I just think a Sgt. Rock story demands a little grit, a little dirt.  Risso's art is super-clean and sharp.  Someone more along the lines of a David Finch or the like might have better served the dirty dogs of Easy Company.  But like I said about the story above, there's still 5 issues coming to prove me right or wrong.

It's a little strange for me to review a comic before the whole story is out, but I like what I see so far!  Beside the bare fact that DC has decided to throw us Sgt. Rock fans a 6-issue bone, I happen to really like when genres are mashed up. . .in this case, war and zombies.  Yeah, it's been done before, but it's still fun in MY book.
Bruce Campbell does a fine job with writing on this one, giving a good sense of military speech in the multiple briefing/ exposition scenes, but kind of leaves new readers in the dark as to who these guys are.  Without a little background, there's not much to tell the characters of Easy Company apart.
Eduardo Risso turns in a predictably great job on the art, but in MY humble opinion, he might not be the best artist for a gritty WWII story.  His art is just too sharp and clean.  This is the kind of story that demands some dirt.  That said, the art's not bad and Risso fans will definitely want to add this one to their collection.
Overall, I liked this a lot and can't wait to see what happens next.  If you're a Sgt. Rock fan, or an Eduardo Risso fan, then this is a MUST-BUY!  If you're looking for a good zombie/ war mashup, then this one is a good choice so far.  The first issue is a bit full of briefings and exposition, but if I know Sgt. Rock, it won't stay that way for long!
Up Next. . .
More Longbox Junk Halloween Horror fun!
Be there or be square!
- read more
1 2 3 4 5 6...32 Previous >>