I’ve been waiting for Captain America: White for a long time. Jeph Loeb and Tim Sale have been my favorite collaborative team for the last eight years, which is when I first read Batman: The Long Halloween. Although I may not have known the title of this series, the premise, or even the characters involved, this is exactly the story I’ve been waiting for since finishing this team’s first masterpiece.

This article contains NO spoilers.

I say “collaborative team” because that is the only way to describe this duo. While most comics define a writer and an artist, this book credits “Storytellers Jeph Loeb and Tim Sale.” As with all of their books, the writing cannot be separated from the art nor vice-versa. The two elements work in harmony as an immersive experience that leaves your emotional response in the team’s custody. This effect is accomplished perfectly throughout the rest of the “colors” collection, where the color itself represents the theme of the story. Daredevil: Yellow (a color representing cowardice) focuses on the roots and control of fear, Spider-Man: Blue (sadness) centers on Peter being forced into his new life as a superhero and the sorrow he feels from not being able to date Gwen Stacy, and Hulk: Gray (ambiguity) analyzes the morals of Hulk’s actions and Gen. Ross’s struggle to categorize the Hulk in a world he views as black and white. So why Captain America: White?

While the storytellers have not yet revealed the exact reasoning behind the color choice, I suspect it is white’s representation of purity that made it the perfect choice to represent Captain America. Steve Rogers is the best of us; a man that can simultaneously stick to the moral high-ground while transcending the moral compass altogether by viewing every situation from a position of rationality and objectivity. Loeb employs this concept as a consistent theme throughout the issue, exhibiting Steve’s constructive response to malicious actions, the unshakable guilt he has over Bucky’s death, and his good-willed treatment towards all (but especially Bucky). Sale mirrors the sentiment with distinct facial expressions conveying Cap’s protective mindset and poses showing Cap’s undoubted heroism in a world riddled with conflict.

The story focuses on interactions between Captain America and Bucky, building their characterization and allowing the reader to achieve a profound understanding of their motivations. Steve is presented as serious and single-minded toward winning the war, even if that sometimes requires him to be aggressive. Bucky balances Steve, “finding the funny” (as Cap describes it) in every situation and staying in the moment rather than focusing on the big picture. Nick Fury’s presence is perfect for creating a contrast between the two and demonstrating how things have changed between WWII and present times. While Jeph Loeb’s dialogue is always great, his artistry truly shines in the inner monologues that scaffold most of his works. Captain America’s narration is written beautifully and illustrates the immense pain Steve feels reminiscing on his history with Bucky. The narrative doesn’t often interact with the main story but, instead, parallels its ideas. When the monologue presents us with a dilemma or emotion, the story answers it, explaining the reasons that Steve feels the way he describes.

Comics are special as a storytelling medium because the illustrations can work in tandem with the story to amplify the meaning of the words. No one does this better than Tim Sale. The illustrations flawlessly capture Captain America’s inner struggles. This is true from the very first page, where we’re presented a comatose Steve Rogers, upside-down and grasping the shield, representing his effort to uphold purity even when his life is completely warped. Marvel’s sliding timeline would normally dictate that (except in flashbacks) all characters are shown with their modern appearance but Sale decides to ignore this, giving him the opportunity to draw a nostalgic world built on the genius of Jack Kirby’s original costumes while improving the designs with Sale’s unique style. Every element in every scene from the main storyline gives you the sense that you’ve been drawn into the WWII world, one filled with darkness and conflict save for Captain America, the beacon of hope surrounded by despair. 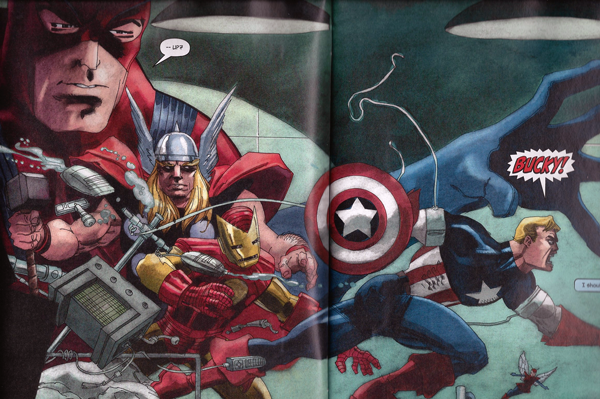 Captain America: White isn’t a common comic book story about the conflict between protagonist and antagonist. The book doesn’t have a hero and a villain, it just has people. These people are troubled and fighting to survive emotionally rather than physically. This type of struggle is what makes me love Jeph Loeb and Tim Sale and why even after eight years of waiting for this series, I still can’t wait for next month’s issue to be released.

Want to read Captain America: White #1? We'll deliver it right to your door!