Welcome to Longbox Junk, where nobody asked me to write any of these comic reviews!

The Longbox Junk 2022 Halloween Horror party is just about over. . .but not quite yet!  There's still a couple of days left before I wrap it up and get back to Longbox Junk business as usual.  Until then, how about another spooky retro review?
So, there I was. . .on Facebook browsing through the posts provided by the fine and friendly folk of OLD GUYS WHO LIKE OLD COMICS .  And here's a free plug. . .if you have ANY love for all things comic book-related from days gone by (as in, before 1986), then join this group!  It's one of the best comic groups out there, and I'll sing their praises any old time. Plug over.
ANYWAY. . .
There I was browsing the posts of one of my favorite Facebook groups and I saw someone had posted a spooky comic book cover.  I said to myself, "Hey! I have that one!"  And so here we are, because why not share what's INSIDE the comic too?  That's what Longbox Junk is all about!
We're heading back to 1973, folks! Let's GOOOOOOO!! 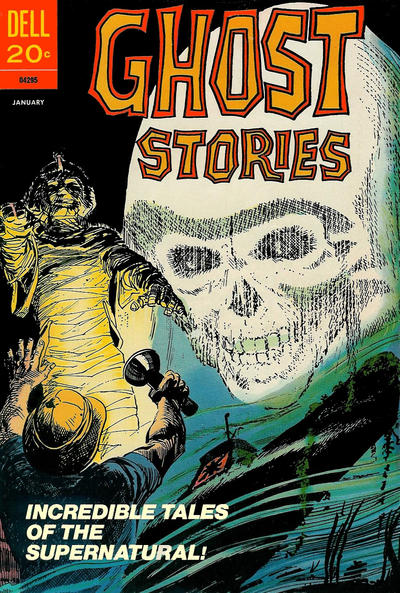 COVER: Jack Sparling
THE COVER:
Jack Sparling was a Dell and Gold Key mainstay.  If you have any Dell or Gold Key comics in your collection, you've probably got some Sparling in there.  This cover isn't his best work (my personal favorite is probably Emergency #3), but it's a solid cover.  Not bad. . .I just like Sparling's painted covers better. Let's get inside!
THE STORIES:
Four original stories in this one.  That's just a nickle apiece!
Let's give each one their own turn.
FORGET-ME-NOT
SCRIPT: ?
PENCILS: Jack Sparling
INKS: Jack Sparling
The Ghost of an ancient Egyptian King shows two archaeologists where ruins they've missed are in a valley that is about to be flooded.  The Ghost also convinces the disbelieving Engineer in charge of the project to delay long enough for the treasures of the hidden temple to be found and preserved. 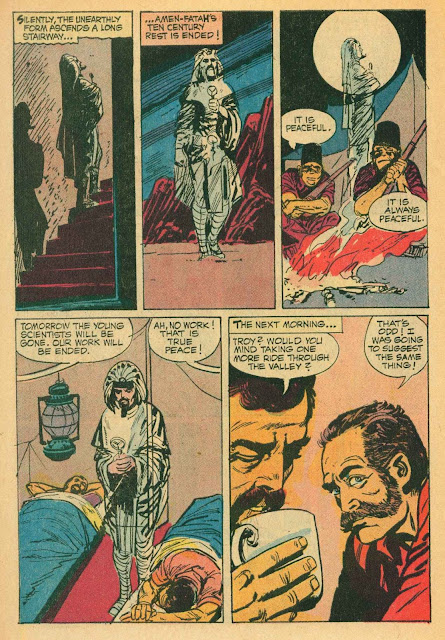 THE REVIEW:
Meh.  A pretty bland and forgettable story.  The ending is a little abrupt and anticlimactic.  Sparling's art is pretty good.  Like the cover, not his best work, but solid visual storytelling.  An underwhelming start to this issue.
NEXT!
THE SECOND CREW
SCRIPT: ?
PENCILS: Jack Sparling
INKS: Jack Sparling
After a U.S. Navy Captain destroys a sub on the last day of WWII just before receiving notice that the war is over, he is consumed by guilt for the death of the men he killed.  He spends his lifetime trying to make amends. . .even going so far as to move to Japan and adopt the families of the submarine crew.
When he dies and is buried at sea, his ghost joins the ghostly crew of the sub and together they bring the wrecked ship home so they may all rest in peace. 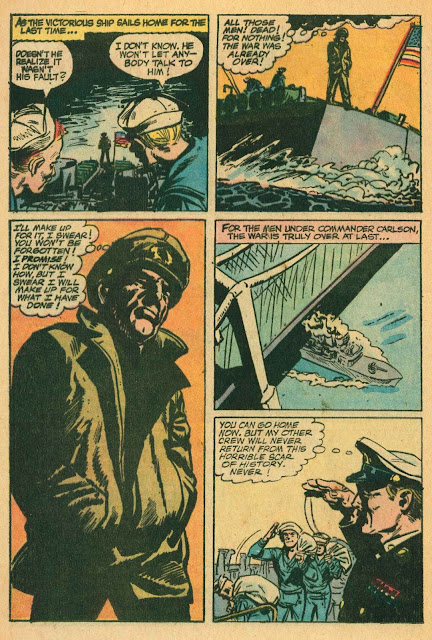 THE REVIEW:
Unfortunately, another pretty bland and forgettable story.  It's not BAD, it's just sort of. . .there.  Sparling's art is once again the high point of the story and even that seems sketchy and rushed in places.
*sigh* This isn't going well, so far.
NEXT!
DO UNTO OTHERS
SCRIPT: ?
PENCILS: Jack Sparling
INKS: Jack Sparling
When an old man named Horace is killed during a robbery in broad daylight, four witnesses to the crime give various reasons why they didn't help him when they could have.  Horace's spirit rises from the grave, determined to teach them a lesson in caring.
As the years go by, Horace's ghost helps each one of the witnesses survive a life-or-death situation, revealing himself to them so they know it was the man who they let die helping them live.  In the end, the four witnesses do indeed learn how to care. 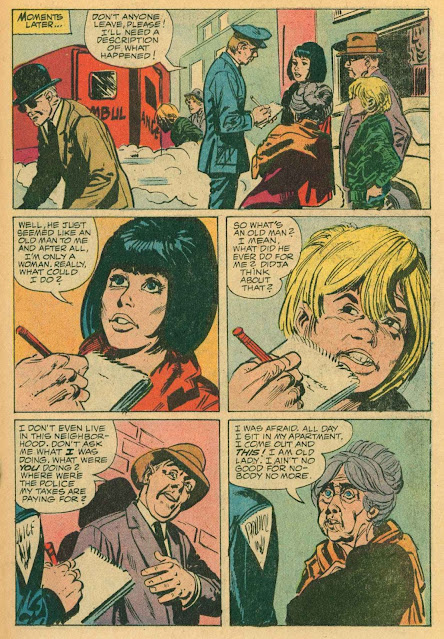 THE REVIEW:
Yet another bland and forgettable story.  Once again, the art by Sparling is about the only saving grace. . .and once again, this isn't even his best work.  So disappointing.
I don't have high hopes for the last story, but here we go anyway.
NEXT!
YOU SEE, THERE'S THIS MONASTERY IN OREGON. . .
SCRIPT: ?
PENCILS: Jack Sparling
INKS: Jack Sparling
After Carrol's best friend, Brit is killed in a car wreck, she remembers an urban legend about a monastery in Oregon where people who are supposedly dead live.  Following a mysterious hearse, Carrol discovers the monastery and the ghost of her friend!
But as she rushed toward Brit, Carrol falls off a cliff and dies.  Now she and Brit live together at the monastery. . .forever. 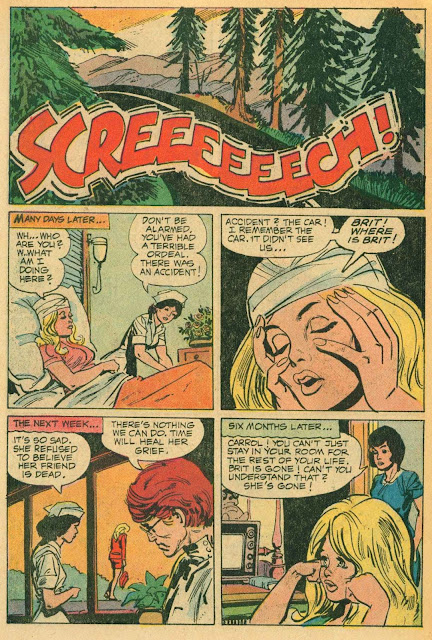 THE REVIEW:
Not only is this another disappointing story, but it's also probably the worst of the bunch.  It really doesn't make much sense.  Even Sparling's art is weaker than anyplace else in the issue.  This whole story just feels rushed and sort of thrown together. Not a good end for the issue at all.

I've said it before, and I'll say it again: They can't ALL be winners.
This issue isn't a winner.
The main problem here is the writing.  It's bland and uninteresting through the whole thing, giving the reader four stories that will be forgotten moments after reading them.  The writer of this issue is unknown, and it's hardly surprising that they didn't want to take credit for such a lackluster offering.
One would THINK that with four stories, at least ONE would be decent, but no.  And it's not that the stories are necessarily bad, it's that they're all just sort of. . .there.
This isn't a BAD comic. . .it's just so forgettable that I can't think of anything to recommend it for beyond some pretty solid art from Jack Sparling, and even THAT isn't his best work by a long shot.
It's extremely disappointing for me writing this pretty poor review because I KNOW that it's probably the first, last, and only review that will ever be written about this issue.  This is it.  Truthfully, it makes me a little sad just thinking about it.  This issue gets ONE review in almost 50 years and it's not a great one.
I guess I'll just say it again:  They can't all be winners.
Up Next. . .
I think I can squeeze in a little bit more Halloween Horror fun before the end of the month!
Be there or be square.