Welcome to Longbox Junk, the blog STUFFED with comic reviews nobody asked me to write!

PICTURE THE SCENE. . .
A group of kids in homemade Halloween costumes nervously make their way up the path to the big run-down house at the end of the block.  As they approach, they see two giant, grinning jack-o-lanterns.  They egg each other on, trying to figure out who's brave enough to knock on the door.  As the oldest kid sets foot on the warped first step leading to the porch, it gives a loud creak. A black cat hisses and jumps onto one of the pumpkins!  The kids turn around, racing back down the path to seek their candy elsewhere.  Amused, the cat watches then run.
The black cat is as much a part of Halloween as anything!
Let's get a black cat into this Longbox Junk 2022 Halloween party.
The comic at hand today is a brand new one from Archie comics, who have been making a sort of surprising splash on the comic scene for the past few years with horror comics set in a twisted version of the Archie universe.  It follows the adventures of Sabrina the Teenage Witch's cat, Salem, while Sabrina is away.
To be honest, I haven't read too many of these Archie horror comics.  My local comic shop seems to have a hard time keeping them in stock, which says something there, I guess.  But I DID manage to snag this one after the cover caught my eye.  Let's take a look inside and see if the $3.99 (+ tax) I threw down is worth it, shall we?  We shall!
BUT FIRST. . .
THIS IS A COMIC THAT IS ON THE STANDS RIGHT NOW.  CONSIDER THIS YOUR SPOILER WARNING!
Everybody in that's staying in?  Let's do it! 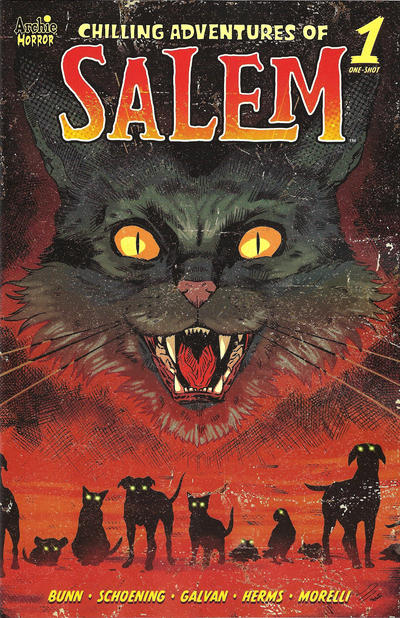 COVER: Dan Schoening
SCRIPT:  Cullen Bunn
PENCILS: Dan Schoening
INKS: Dan Schoening
THE COVER:
This cover is what caught my eye and made me buy this comic, and what a great Halloween cover this is!  The autumn red, orange, black, and yellow colors. . .the looming cat. . .the mysterious glowing eyes of the animals silhouetted along the bottom.  THIS is a cover that grabs the attention!  Let's get inside.
THE STORY:
Curiosity ALMOST kills the cat when Salem follows a mysterious man he senses is a sorcerer that might have something to do with the unusual number of missing pets lately.  Salem is attacked by a group of animals with eerie glowing eyes, and when he wakes up, he is in a cage. . . 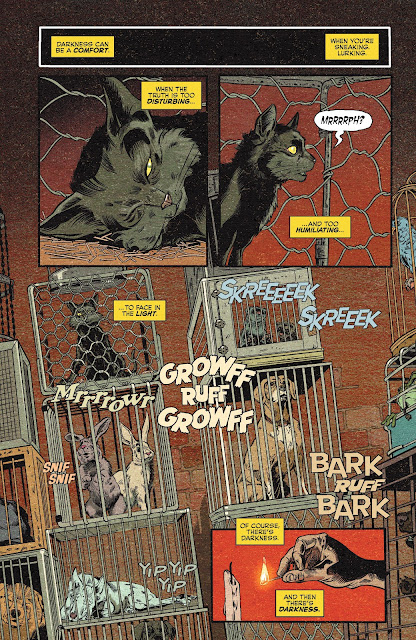 From his prison, Salem watches as the mysterious man performs a ritual that summons a demonic spirit into the body of a stolen dog.  Being a sorcerer himself, Salem realizes that the human is walking a dangerous tightrope by forcing demons into animal bodies instead of humans.
Salem tries to use that to his advantage by taunting the demon-possessed animals about their lowly state.  Finally, it comes to be Salem's turn to be possessed by a summoned demon. . .but to the sorcerer's shock and surprise, the ritual doesn't work!  Salem's cat body is already possessed by another spirit! 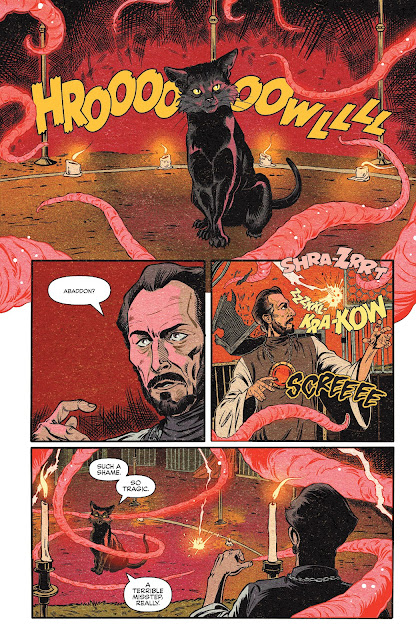 The summoned demon, denied a host, strikes out in anger!  The sorcerer implores his possessed animal servants to help him, but they refuse because the human has broken the pact he has made with the dark forces!
As Salem taunts the sorcerer for trying to toy with forces beyond his control, the demons abandon their animal forms and return to their own world, abandoning the sorcerer as the house burns around him! 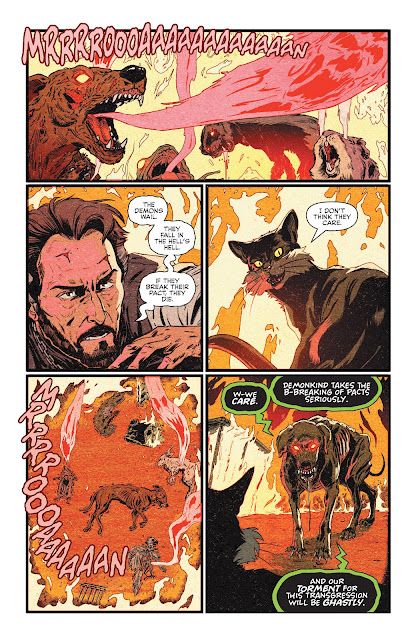 As the human desperately tries to escape the burning house, Salem releases the rest of the trapped animals and they attack him, sending the sorcerer to the realm of demons to be tormented for breaking the dark pact.  Salem watches the sorcerer's death with amusement, then returns to hunting mice outside. 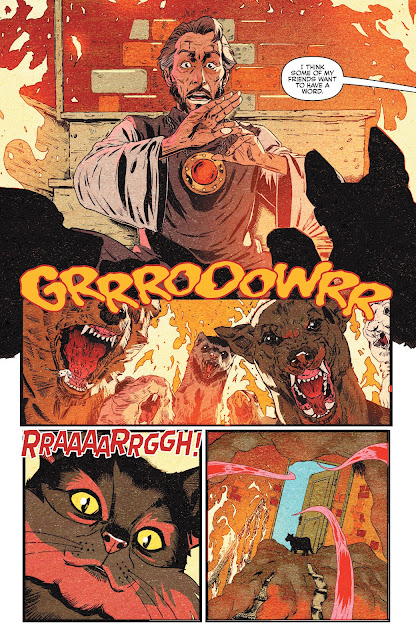 The End. . .
THE REVIEW:
Not a bad little one-shot story!  Cullen Bunn manages to nicely capture the spirit (Heh, heh!) of horror anthologies of days gone by with this tale of magic gone wrong.  I can easily see this story being featured in one of the longer form anthologies of the 60s or 70s where there were only one or two extended stories inside (Like Doorway to Nightmare ).
Like the short anthology tales this story evokes, it's a fast read, without much deviation off the path from beginning to end.  That said, it's a good read.  Unfortunately, also like those anthology stories of days past, this isn't a very memorable story.  It's the sort of thing that is read, enjoyed, and forgotten.
On the art side of things, the autumn color scheme that made the cover such an eye catcher continues through the whole issue, giving us a story told in wonderful shades of red, yellow, orange, and black.  The art is detailed, but just a little exaggerated and cartoony in places.  This isn't a bad thing, it serves to remind that this is a story taking place in a twisted, darker version of the familiar cartoony world of Riverdale.

If you're a fan of anthology horror comics of days gone by, then you'll like this one-shot story.  It's a good read with some very nice art, but it's ultimately forgettable.  It's something you enjoy while reading it, but then it gets bagged, boarded, and forgotten. . .probably never to be read again.
I can certainly recommend this issue as a nice little Halloween comic, but I'm not so sure it's worth paying out $3.99 + tax to buy new.  That said, it's in kind of a strange place for a Longbox Junker like myself.  These Archie horror comics are super popular, so they're rare in the bargain bins (as in, I've only found a couple of the Sabrina ones over the past several years), so maybe the only way to get this one is to just go ahead and pay full price.  It's not likely to land in the bargain bin anytime soon.
Overall, this is a cool little story, but I'm just not sure it's worth buying new.
Up Next. . .
There's still a little October left, so there's still a little Longbox Junk Halloween horror fun to come!
Be there or be square.