Welcome to Longbox Junk, where the comics are cheap, and the reviews are FREE!

What's a Halloween party without some ghosts?  You know the answer just as well as I do, it's not a Halloween party at all!  So, let's crank up the Longbox Junk time machine for trip back to 1974 for some Bronze Age comic book ghost stories, shall we? WE SHALL!
It's another Longbox Junk retro review nobody asked me to write! Why isn't anyone clapping?
Let's do it! 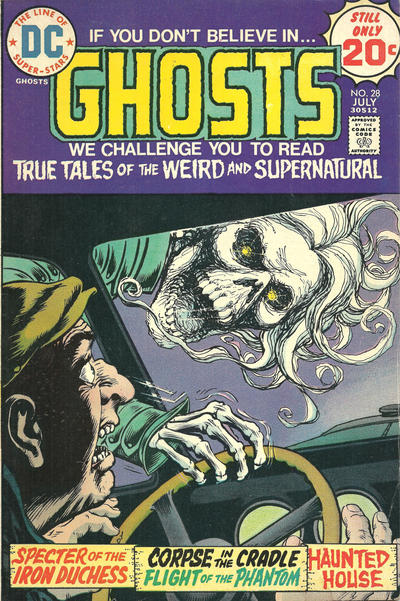 COVER: Nick Cardy
THE COVER:
Now THERE'S a real Bronze Age beauty, courtesy of the late, great Nick Cardy!  A horrific vision rendered in supreme detail by a true comic legend.  It's simply a great piece of horror comic art.  The title takes up too much room that could have been used to give us MORE of Cardy's fantastic artwork, but that's the only thing wrong with this cover.  Let's get inside!
THE STORIES:
Three full ghostly comic stories and a one-page text piece in this one.  That's some darn fine value for two thin dimes!  Let's give each one their own turn. . .
FLIGHT OF THE LOST PHANTOM
SCRIPT:  Leo Dorfman
PENCILS: Don Perlin
INKS: Don Perlin
In 1965, as a reporter covers a story about the decommissioning of the aircraft carrier, Washington, he hears the tale of a fighter pilot lost during WWII at the battle for Saipan.  A pilot whose death has haunted the former Captain of the Washington since the day he let it happen to protect the men on the carrier.
The disbelieving reporter soon learns the truth of the strange tale when he sees the ghostly plane finally coming in for a landing, and the former Captain guiding it in before he dies on the deck of the Washington! 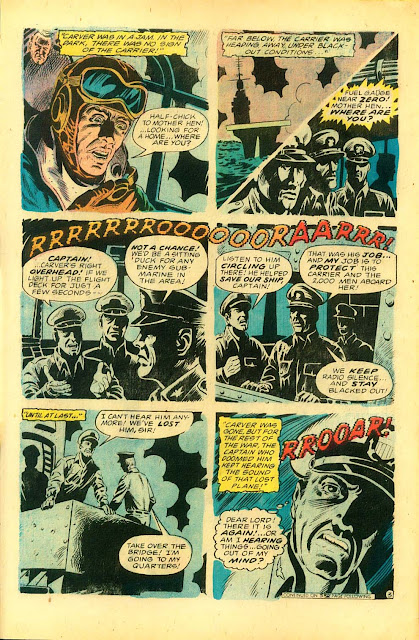 THE REVIEW:
Not a bad start.  It's not the most memorable story I've ever read, but this tale of a retired ship Captain sacrificing himself to right a wrong and give a lost spirit rest is a decent read.  The art is the high point of the story, with Don Perlin making great use of dark shadows and bold lines, a great job of inking!
All in all, a good start.  Let's see what's up next!
THE CORPSE IN THE CRADLE
SCRIPT:  Murray Boltinoff
PENCILS:  Alfredo Alcala
INKS: Alfredo Alcala
Long ago in the Scottish Highlands, farmer Clyde Jameson and his good wife prepare for the birth of their first born child.  Though they are poor, Clyde is determined to give his son all the things he never had.  And so, Clyde takes a job as a fisherman, leaving his wife until the harvest season.
Upon his return, Clyde is shocked to find his wife in poor health.  On a rainy night, her time to give birth comes and Clyde rushes through the downpour for the doctor.  His son is born and they live happily ever after.
Except that's not what happened.  His wife and son died in childbirth and it broke Clyde's mind.  The rest of his life, he lives with their ghosts, never admitting the truth, becoming a living ghost himself. 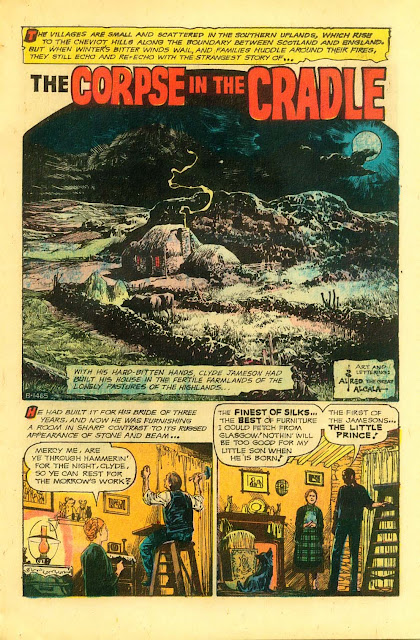 THE REVIEW:
This was a really well-written little story!  The stinger that the happy ending wasn't really what happened was actually a surprise.  When you've read as many of these horror/suspense anthology comics as I have, an ending that comes as a surprise is a rare thing!
But as good as the story is, the art (like the first story) is the real star of the show!  Just LOOK at the page I scanned above!  That upper panel of the farm has such rich detail and personality!  It's not just a great piece of comic art, it's a great piece of art, period.  Each page of this story is filled with the same fine detail.
Overall, a well-written story with a twist ending that's actually a surprise, backed up with some truly great Bronze Age artwork.  This one's a winner!
NEXT!
THE SPECTRE OF THE IRON DUCHESS
SCRIPT:  Leo Dorfman
PENCILS: Jerry Grandenetti
INKS: Jerry Grandenetti
In an Eastern European country during the Soviet era, transportation minister Jan Rasek finds himself in danger of losing his job and possibly his life when supply trucks keep disappearing on a mountain road.
Upon investigating, he learns of a legend that a ghostly Duchess protects the road from the ruins of her ancient castle and will do so until the castle is destroyed.  Although the Soviet council doesn't believe him, a late-night encounter with the ghost convinces Rasek of the truth of the legend.
Determined to destroy the ancient castle and release the trapped spirit, Rasek drives a truck filled with explosives to the castle, but the ghostly Iron Duchess attacks him.  After a tense fight, Rasek is finally able to destroy the castle with the explosives, but at the cost of his own life.
The next day, the first vehicle to be able to freely pass the ruins of the castle is the hearse bearing Rasek's body. 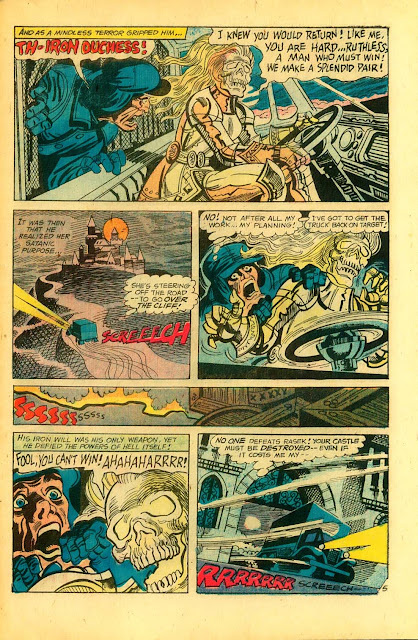 THE REVIEW:
I sort of had high hopes that this last story would maintain the quality of the first two, but it falls flat in both writing and art, leading to a disappointing finish.  The story is. . .okay. It's pretty weak, to tell the truth.  Not much put into it. The art looks sketchy and unfinished in many places.  Writing and art combined have a definite stench of minimum effort.  This story feels like a filler.
Oh well, I guess they ALL can't be winners.
AND FINALLY. . .
THE FOREST OF NO RETURN
SCRIPT: ?
ILLUSTRATION: ?
We have a one-page text filler to finish off this issue.
It's about the true unsolved mystery of 4 different children who disappeared without a trace in the Los Angeles National Forest between 1956 and 1960.  It's written in a very matter of fact way and is probably the most frightening thing in this horror comic for being completely true. 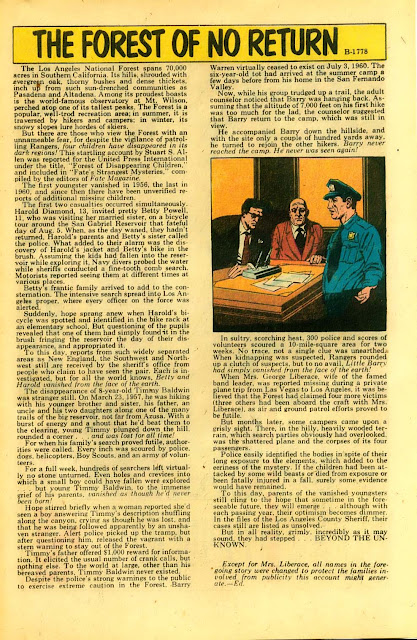 Two good stories, one. . .not so good.  All in all, not bad.  The last comic story is a bit of a stinker, but the rest of the comic is pretty good, and there's some very nice Bronze Age comic art showcased in the first two stories.  The text piece filler is sort of take it or leave it.  It's the facts of a true unsolved mystery and you'll either enjoy it or not based on your like or dislike of the subject in general.
Overall, this was a pretty good read and I feel I can recommend it for fans of Bronze Age horror/suspense anthologies if you spot one at a decent price.  I wouldn't suggest going out of your way to find this issue or pay a premium price for it.  There are some good stories with some good art inside, and the cover is absolutely awesome, but there's also a pretty bad story with awful art in here too.
Up Next. . .
You guessed it.  MORE Longbox Junk Halloween Horror fun!
Be there or be square.