Welcome to Longbox Junk, the place to find all the comic reviews you never asked anyone for!

Not a bad Halloween Party so far.  A few tricks, a few treats.  Some nice costumes.  Good fun!
This year, I've invited a special guest. . .someone we haven't had here yet since I started doing the Longbox Junk Halloween party.  Let's welcome the one and only ELVIRA, MISTRESS OF THE DARK!
Elvira is a character that embodies the sillier side of Halloween.  Love her, hate her, or indifferent, she's been an unavoidably campy fixture of the season for decades.  Anyone with even a little bit of pop culture exposure knows who Elvira is. As far as comics go, she's had a pretty good run of four-color fun over the years.
Elvira's most recent comic home is at Dynamite, but there was a short time in the 80s when DC had the comic rights to the character and were trying to bank on Elvira's popularity as the hostess of a revival of their House of Mystery anthology series.  It only lasted 11 issues and a Special, so. . .maybe NOT so popular after all?
Let's take a look at an issue and see what was going on, shall we?  WE SHALL! 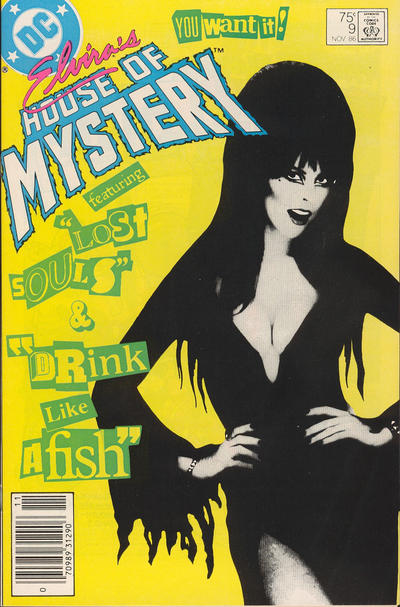 THE COVER:
Love it!  It has a campy pop art look to it that just makes it catch the eye.   It sort of has the look of an old concert poster. The bright yellow background, the black and white photo of Elvira, and the giant mixed font lettering all combine to make this cover something that will NOT be ignored!
So, nice cover. Let's get inside and see what else this comic's got. . .
THE STORIES:
Two stories in this one, with a framing device that threads through the issue of Elvira finding an old film projector in a room of the House of Mystery and her watching movies she finds with it.  Let's give each story its own turn. . .
LOST SOULS
SCRIPT: Darren Auk
PENCILS: Darren Auk
INKS: Victor Laszlo
When writer Jonathan Gray retreats to an old house in the country for privacy and inspiration, he finds himself having horrific nightmares of a murderous, living doll.  As the nights go on, the dreams become more and more real until the beautiful landlady reveals to him that her grandfather is a vampiric spirit tormenting him, using his hellish powers to increase his fear and make it easier to steal his soul!
The landlady admits that she is also a vampiric spirit, a succubus, a stealer of men's souls!  She begs Gray to help her destroy her grandfather, but as the demon's attacks begin to intrude on Gray's reality, he gives in to his fear and runs for his life, leaving the succubus behind to set fire to the house and destroy her grandfather. . . 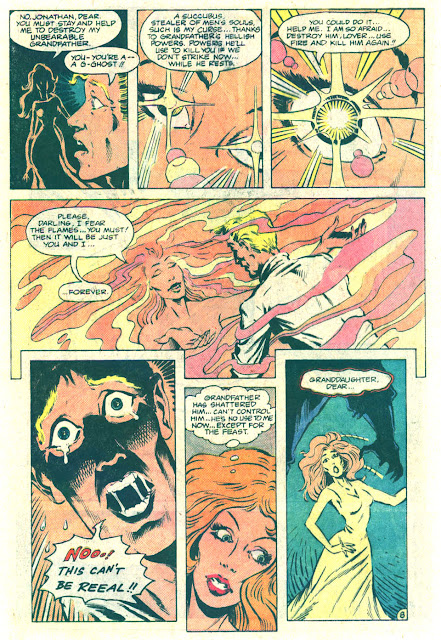 In the end, Gray thinks he's escaped, but as he drives away, he is attacked by the killer doll in his car, proving that the succubus was not able to destroy her grandfather, and sealing his fate! 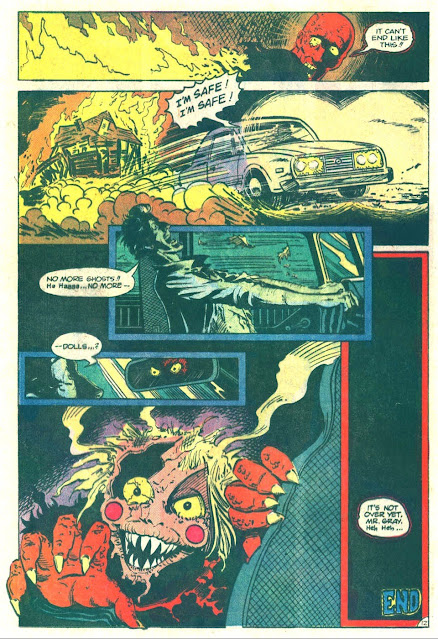 THE REVIEW:
Not a bad little story!  It has a pretty timeworn "gotcha!" ending, but other than that, it's not bad at all.
It's not the greatest or most memorable comic horror story I've ever read, but it's a decent read.
On the art side of things, I liked Darren Auk's style.  It has an interesting mix of realism and exaggeration that fits a story where the narrator loses his grasp of what's real and what isn't very nicely.
Overall, I liked this story quite a bit.  It's well-written and has some nice art.  What more could I ask for from a comic I bought for two bucks because of the cool cover?
MOVING ALONG!
DRINK LIKE A FISH
SCRIPT: Dennis Yee
PENCILS:  Graham Nolan
INKS:  Reuben Pharms
When Davy's friends taunt him for not joining in the party after a day at the beach, he decides to go against his doctor's orders and drink a beer. . . 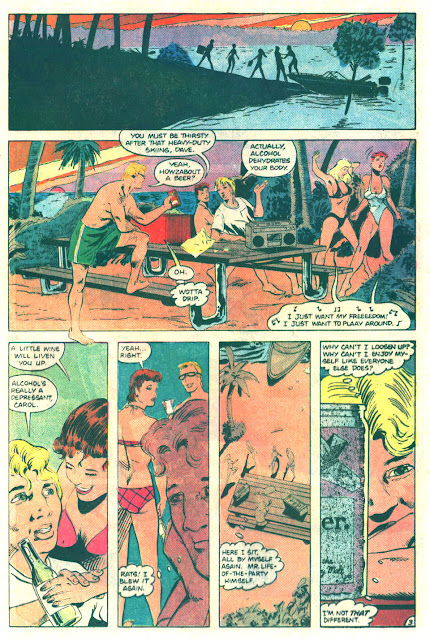 The alcohol affects him in a strange way, transforming him into a reptilian creature! After he changes, Davy remembers that he is there on an assignment to observe the human land creatures, and the alcohol has neutralized the serum that allowed him to maintain his human disguise.
His true identity now revealed, he must reluctantly return to the sea, leaving behind his human life and the woman he came to love. 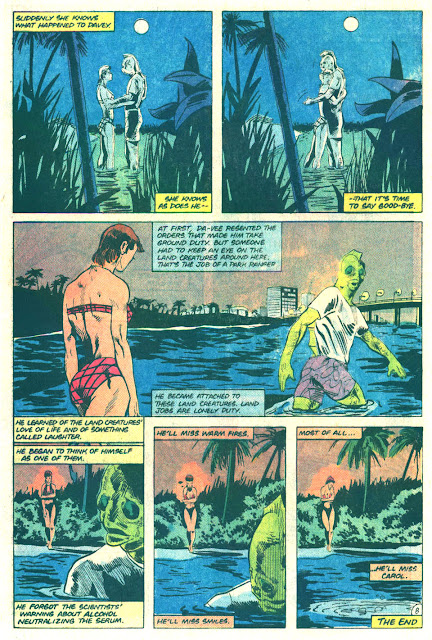 THE REVIEW:
This one is a bit of a dud. The emotion the writer tries to put into the end of the tale falls flat because the front end is rushed and there's no investment in the lovers cruelly separated by fate because we don't really get to know much about their relationship to start with.  Okay, I get it. . .it's a short story.  But even ONE extra page would have made it better.
On the art side of things, I know Graham Nolan from his work on Detective Comics. . .and this is NOT his best work at all.  The whole story looks somewhat sketchy and unfinished.
Overall, this is just not a very good story at all.  I guess they can't ALL be winners.

Honestly, the best part of this comic is the awesome pop art style cover.
The first story isn't bad.  It's actually pretty good, with some interesting art to back it up.  But ultimately, it's not the sort of story that's going to stick and be memorable.  It's a decent read, but that's about as far as it goes.
Unfortunately, there's not much to like at all about the second story, which ends this comic on a sour note which hardly makes this comic seem worth the time to hunt down just for a good cover and a decent opening story.
All in all, this comic is definitely half and half. It has a great cover, a promising opening and a disappointing end.  I say give it a read if you spot it in a bargain bin on the cheap, but don't spend much effort trying to hunt it down unless you happen to be a big Elvira fan (she only appears on a few framing story pages).
Up Next. . .
We're only halfway through October, so the Longbox Junk Halloween Horror party keeps going!
Be there or be square.