The Longbox Junk Halloween Horror 2022 party has just started, so let's keep it going!
This time out, the comic at hand is a horror anthology special from a publisher that has definitely carved out a niche in the "sexy cover" category of comics.  Zenescope has the sort of covers that MIGHT get you a strange look from your wife if she sees you buying one.  Talking from personal experience here.
But what's under that cheesecake cover?  Is it worth your time and hard-earned cash?
Let's take a look and find out! 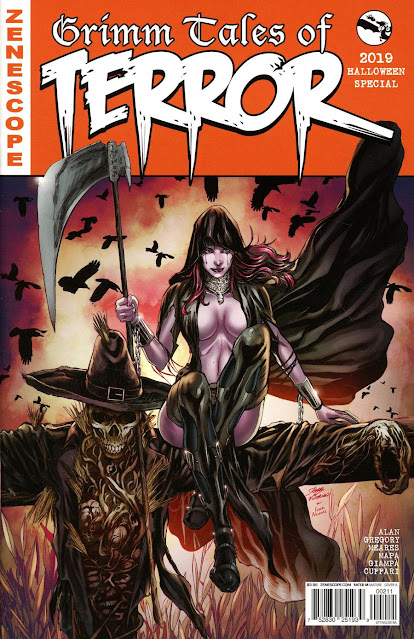 COVER: Igor Vitorino
THE COVER:
Yep.  That's a Zenscope cover. Looking at the variants for this issue, I see that I actually have the tamest of the bunch!  Honestly, I like it.  It could stand to tone the sexy down a bit, but I guess if it ain't broke, don't fix it. Zenescope knows their lane and keeps in it.  It's nicely detailed, I like the muted colors a lot, and the scarecrow is actually pretty creepy.  Not a bad cover. . .just not one to hang on the office wall.
THE STORIES:
Three stories in this one, all tied together with a framing story thread about Keres, (Zenescope's Goddess of Death), setting up a costume shop in a college town in order to bring punishment to those worthy of it running through the issue.
Let's take a look at each story in turn. . .
EVIL TATTOOS
SCRIPT: R. Alan
PENCILS: Butch Mapa
INKS: Butch Mapa
A bullied kid finally gets his revenge on his tormentors thanks to magical rub-on tattoos given to him by a woman at a mysterious costume shop that turn the bullies into twisted monsters. 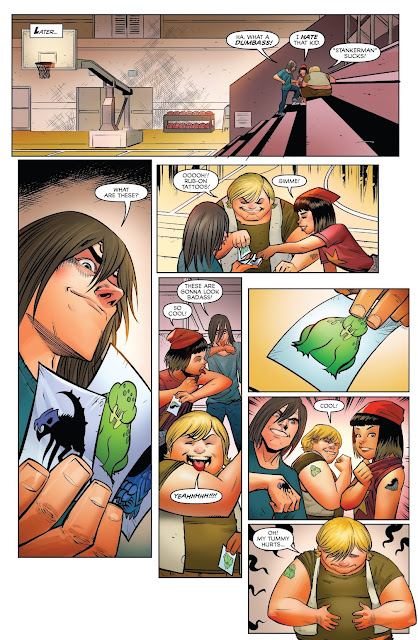 THE REVIEW:
Not a great start.  This first story is so light that it's almost not even there.  From the title to the extremely basic artwork, this reeks of minimum effort.  Hopefully, things will get better from here.
MOVING ALONG!
CAT AND MOUSE
SCRIPT: Raven Gregory
PENCILS: Umberto Giampa
INKS: Unberto Giampa
At a frat house Halloween party, a would-be predator finds himself being the prey when strange decorations bought at a mysterious costume shop summon an ancient vampiric demon in the form of a beautiful woman. 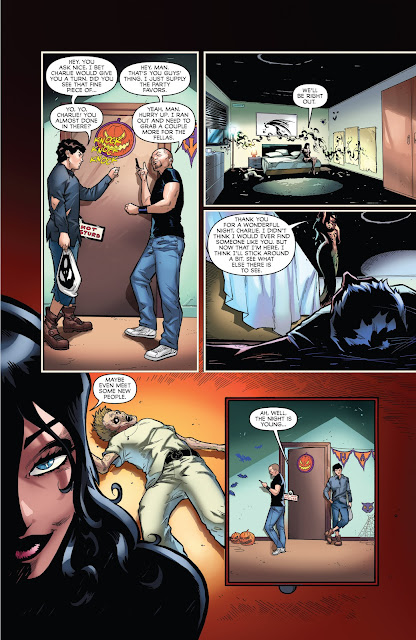 THE REVIEW:
*sigh*
Another extremely light story that seems to be more of an excuse to feature a scantily-clad woman through about half of the panels than anything else.  At least the art on this one is much better than the first story.  That's about the only thing to like here.
I'm not holding out high hopes for the last tale, but let's check it out!
THE HUNTER
SCRIPT: Ben Meares
PENCILS: Salvatori Cuffari
INKS: Salvatori Cuffari
A beautiful woman turns the tables on the stalker hunting her when she reveals that she was, in fact, hunting him the whole time. 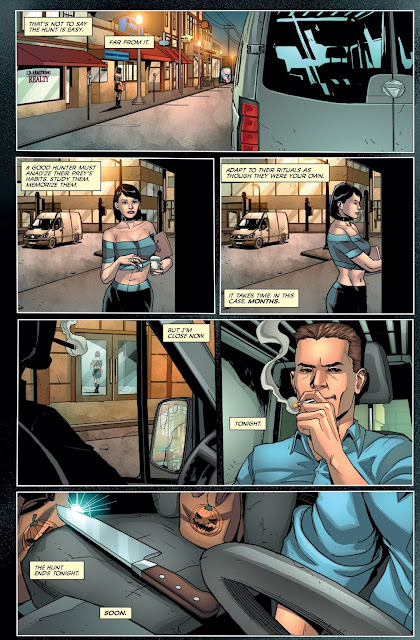 This is the second tale in this issue to follow the well-worn "Hunter becomes the prey" story path.  This one actually pulls it off much better in the writing department, but takes a step back with the art.  Although I DID like that the reader doesn't really know which point of view the story is being told from page to page, this is still a pretty forgettable effort.

Overall, this was a pretty weak excuse for a horror comic.  There is a definite feeling through the whole thing that it's just a minimal effort excuse to put pages between the sexy cover that Zenescope was counting on being the selling point.
To be honest, nothing here was BAD, but nothing was really that good, either.  The art in the second story and the writing in the third manage to reach the bar of "pretty good", but there's no effort to go any higher than that.
I think it's safe to say that most horror comic fans can go ahead and skip this one unless you happen to be a fan of sexy comic book covers (and there's nothing wrong with that).  There's really not much here to like.  I found this in a dollar box and that's right where it belongs.
Up Next. . .
That's right! MORE Longbox Junk Halloween Horror fun!
Be there or be square.