Welcome to Longbox Junk, the blog absolutely STUFFED with comic reviews nobody asked me to write!

In case you haven't noticed by now, I spend a LOT of time digging through bargain bins.  I've noticed over the years that there are certain "staples" that no decent dollar box is ever missing. . .Image Comics is probably the biggest one of those staples.
If you are in a comic shop. . .it doesn't matter where that comic shop is. . .and you are going through a box of cheap comics, I GUARANTEE you're going to be finding some Image Comics.  I'd put money down on that guarantee and not worry one bit about losing it.
What I'm saying is that when it comes to Longbox Junk, Image is the King of The Hill.
Now, don't get me wrong.  Since their founding in the 90s, Image has matured into the publisher you go to when you get tired of the same old superhero stories, but back in the beginning it was ALL superhero ALL the time.
Image wanted to be Marvel SO badly, that when you read Image comics today, it's almost pathetic.  Their trying to grab Marvel's fans is so obvious and so blatant that I'm surprised they didn't get sued over their barely-disguised versions of established Marvel characters.
THAT SAID. . .
While Marvel WAS Image's biggest "inspiration", DC was definitely on their radar as well.  Image didn't have nearly the amount of DC "inspired" characters as they did Marvel, but they were there.  Supreme for Superman, ShadowHawk for Batman, and Glory for Wonder Woman (among others).
Which brings us to the comic at hand!
Glory is a character created by Rob Liefeld in 1993.  She's the result of a union between an Amazon Queen and a Demon Lord, raised by her mother among the Amazons and becoming their greatest warrior.  She struggled with her dual nature and eventually left her home among the Amazons to live in the world of Man. . .first appearing as a heroine during World War II (Thanks, Wikipedia!).
See what I mean about Image's early characters being heavily "inspired" by established characters?  How they managed to avoid a pile of lawsuits is a mystery to me.  Obviously, from the description above, Glory is a blatant copy of Wonder Woman.
BUT. . .
I'm willing to give ANY comic a fair chance, and that's what I'm gonna do here.  So let's take a closer look at Image's version of Wonder Woman and see if there's anything to like, shall we?
WE SHALL! 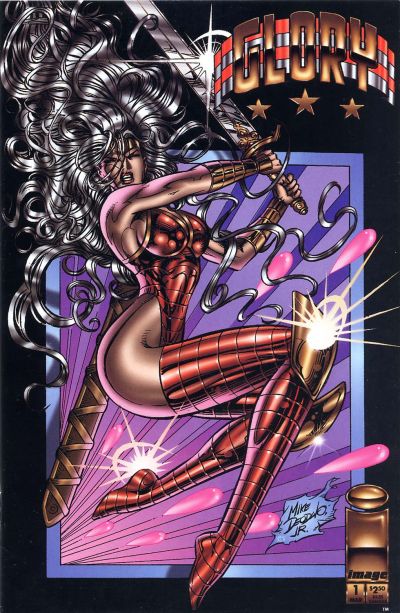 WHO WROTE THE BOOK OF LOVE?
SCRIPT: Jo Duffy
PENCILS: Mike Deodato
INKS: Mike Deodato
COVER: Mike Deodato
THE COVER:
You want 90s? You GOT 90s with this cover!  I don't even know where to start.  This cover has a LOT going on. Unfortunately, not much of it's good.  I DO like the black frame and the colors, but that's about it.  It's not the worst example of 90s art that I've seen, but it certainly hasn't aged well. You can definitely see what Image was trying to sell here. Let's just say I'm glad we've (mostly) moved along from this sort of thing.
Let's get inside!
THE STORY:
We begin our tale in the middle of an ongoing conversation.  Our titular hero, Gloriana Demeter (AKA Glory) is at a meeting with the board of Factor Cosmetics.  Mr. Factors himself is trying to sell Glory on the prospect of being the spokeswoman for Factor's newest line of cosmetics. . . 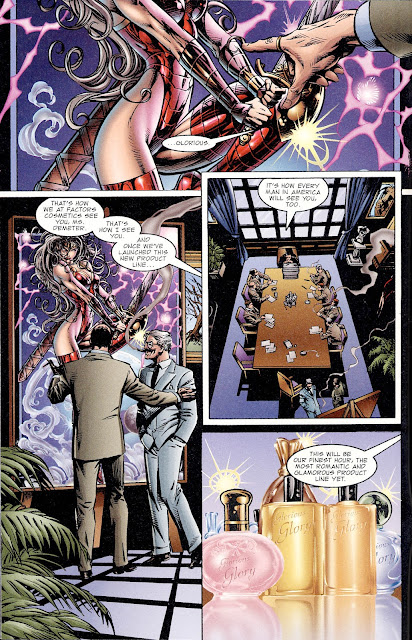 Unfortunately for Mr. Factor, Glory doesn't seem to be interested in his somewhat offensive hard-sell technique.  She tells him in no uncertain terms that he has nothing new to offer her, and that pleasing normal men isn't interesting to her any longer after having been with the superhuman Supreme.  In the process, we get a brief bit of exposition on her decades-long superhero career during and after WWII. . . 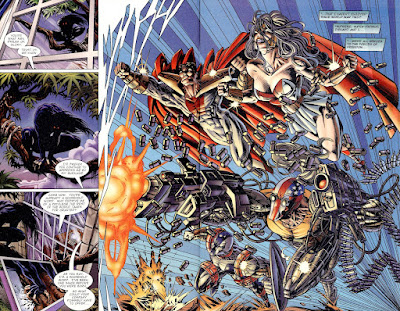 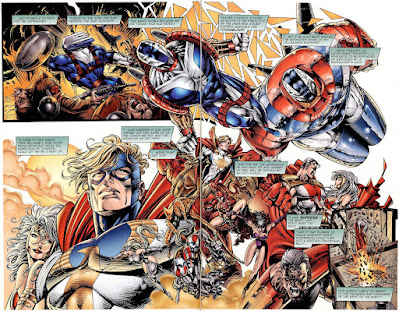 Factors counters by telling her that the. . .ahem. . .Glory Days are long past and that she's no long a household name.  In the meantime, outside the window, Glory's friend and Brigade teammate Leonard Swann (AKA Vandal) kills a strange bird. . . 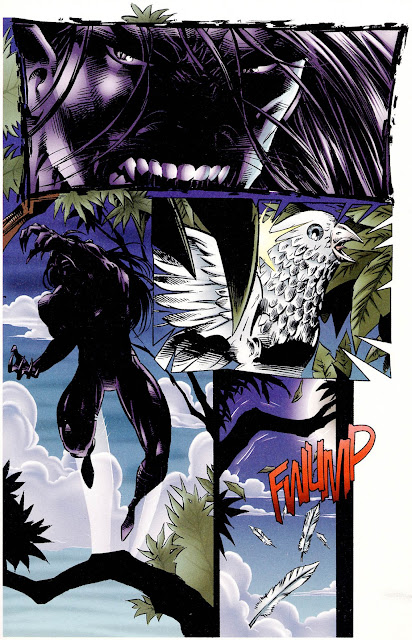 We discover that the bird was a spy sent by Glory's father, the demonic Lord Silverfall, who is watching Glory from his hellish castle in the underworld. . . 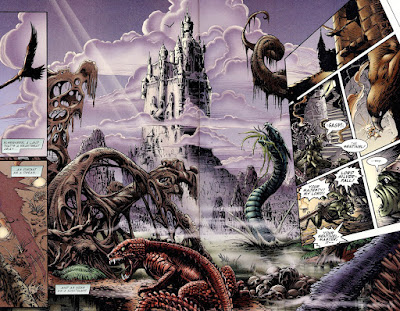 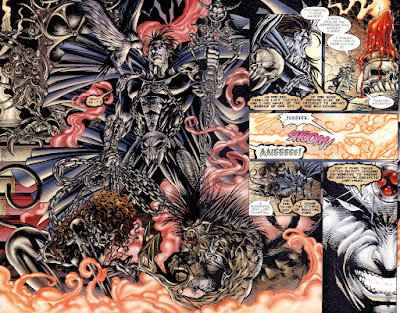 Back in the Factor Cosmetic boardroom, Glory refuses Mr. Factor's offer.  Factor does NOT take this well and begins to berate and harass Glory. . .perhaps unwise, when the object of Factor's attempted bullying is a superpowered half demon.  A fight breaks out and Factor's bodyguard pulls a gun! 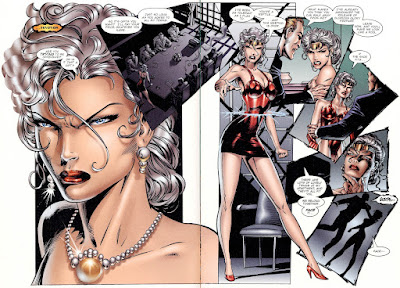 Glory punches the bodyguard through the window, where he is saved from falling to his death by another one of her Brigade teammates waiting for her below, Flanders Edison (AKA Rumble). 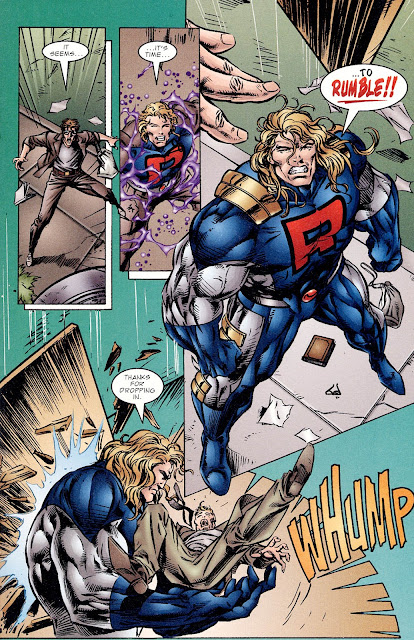 Glory leaves the meeting and joins her friends below. She tells them what happened, and they think she let them off too easily.  The heroes leave the scene after Rumble changes back to normal size.
He tries to tell the other two about an antique arcane book he's discovered, but Glory and Vandal ignore him as Vandal tells Glory about the spy from Lord Silverfall he found. . . 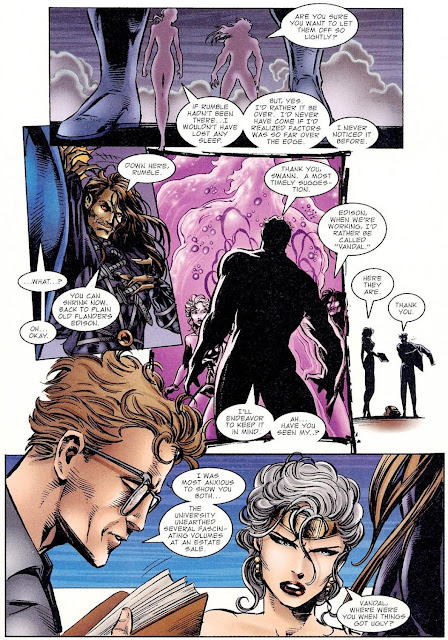 As Rumble and Vandal leave to go get some food, Glory is ambushed by some sort of demonic creature! 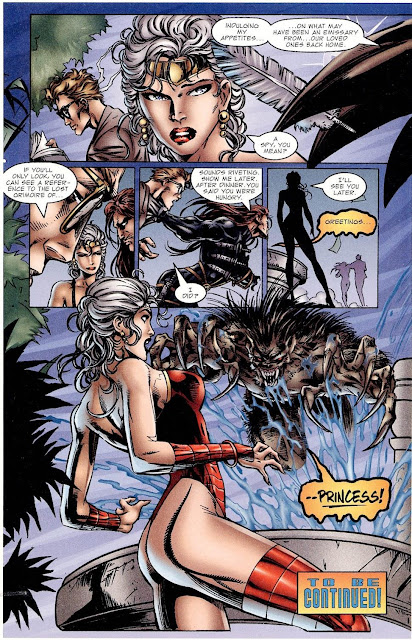 The End. . .To Be Continued!
THE REVIEW:
Allright.  There it is.  The first issue of Image's Glory.  Let's break it on down!
*Sigh* There's not much here to like, to be honest.
There's no real beginning to this story, as we're dropped right into the middle of a conversation.  There's no real ending, with the issue just stopping at a cliffhanger surprise attack.  What's in the middle is really very short and doesn't shed much light on who Glory is, what she's about, and why we should keep wanting to read about her.
I've laid out my personal expectations for the first issue of a comic series quite a few times already here at Longbox Junk, but to sketch them out again, I expect a first issue to introduce characters and their situations in a new reader-friendly way and to leave me wanting more.  It's a pretty low bar.
Unfortunately, Glory #1 fails at both of these simple things.  There's a LITTLE bit of information about Glory here, but not nearly enough to qualify as a decent introduction to a new reader.  I had to go to Wikipedia to learn who the demonic guy watching her was (Her demon father, Lord Silverfall) and to learn that Glory is half Amazon and Half Demon.  Her teammates just appear out of nowhere and I had to hit Wikipedia to find out who THEY were as well.
I feel sorry for new readers in 1995 who didn't have Wikipedia, because this is a pretty lousy introduction.  It's obvious from the letters page to see that Image was fully expecting readers to go out and buy Brigade, Supreme, Youngblood, and several others in order to get the big picture.  What we have here is just a fragment.
As far as leaving me wanting more, Glory #1 fails even harder than it did in giving me a decent introduction to a new character.  After reading this and realizing I would have to dig into several other series to find out what's going on, I lost interest in ever wanting to know more about Glory.
There's a definite stench of money grab wafting out of this comic.  From the cheesecake cover to the letter page listing out the *checks* TEN ISSUES from EIGHT different series you need to read to fill in the story past the fragment here, this whole thing reeks of a publisher trying to scrape every dollar they can from their fans.

Style over substance is good way to sum up this comic.  It's basically a cheesecake cover hook baiting Image fans into buying the first issue of a series that doesn't even introduce the main character very well and gives them no incentive to read more without shelling out ten times the cash they've already spent on this issue.
If nothing else, Glory #1 serves as a perfect example of the desperation in Image's early sales tactics.  Other than that interesting bit of insight into the strange days of 90s comics, there's really nothing else I can recommend about this beyond a few nice panels of art (like the double page spread of Silverfall's castle I scanned above).  Maybe it gets better as it goes on, but this first issue leaves me completely uninterested in finding out if it does. Glory is a bargain bin mainstay, and now I see why.
Up Next. . .
He's a guy you do NOT want to see when he's angry.
Yeah, you know who I'm talking about. It's the one and only INCREDIBLE HULK!
I recently got my hands on a half dozen of Marvel's "The Hulk" magazines from the 1970s. What say we take a look inside one and see what's going on?  Let's do it!
Be there or be square.