Welcome to Longbox Junk!  If you want comic reviews you never asked for, you're in the right place!

First, my sincere apologies for the delays between posts.

I had a nasty case of COVID several months ago and it seems that it's not going to entirely be letting go of me any time soon.  My doctor tells me I'm one of the "lucky" COVID  "long haulers".  I feel like I have no energy or motivation. . .even for something as simple as sitting down to write a comic review.  I also still have pretty frequent problems breathing and just generally have a constant light-headed feeling and hardly any appetite, along with random hot flashes several times a day.  It ain't fun, folks!

In other words, to respond to the messages I've gotten wondering if Longbox Junk is over with, the answer is no.  It's just a little hard for me right now to summon up the energy and motivation for ANYTHING.   That said, here's a nice little nugget of Longbox Junk, even if it DID take me more than a month to write it!

I like to think of this blog as a sort of random search through a virtual bargain bin.  Here's some Captain Carrot.  Here's some Batman.  Here's some Bionic Man. Here's some. . .Oniba? What even IS that?
The more you dig through the blog, the more stuff you find.  I've purposely tried to recreate the experience of thumbing through an unsorted box of comic books. . .There's trash, treasure, and everything in between.  I like how it's turned out so far!
To me, a big part of comic collecting is the thrill of the hunt I've tried to recreate here.
I love finding something I never knew I wanted or even knew existed until that exact moment I see it in a nasty bag with 20-year-old tape on the flap.  The comic at hand is a perfect example of what I'm talking about. . .
I've never really been too familiar with Marvel UK comics.  I didn't even know this WAS a Marvel UK comic until I got it home and took a closer look.  All I knew is that it had an awesome cover, it cost one lousy buck, and I'd never heard of it.  Longbox Junk at its finest!
So, let's take a look at a little something courtesy of Marvel across the pond and see what it has to offer, shall we?  WE SHALL! 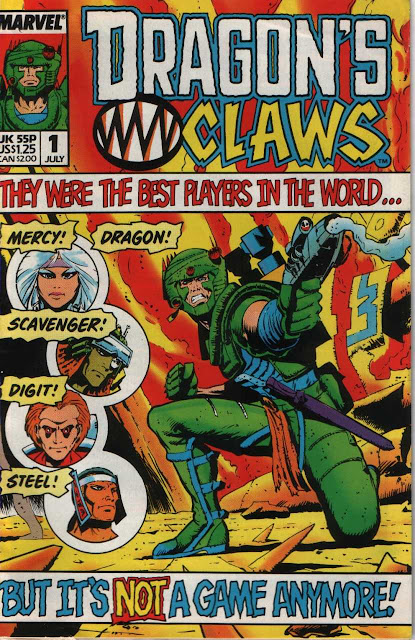 THE GAME
SCRIPT: Simon Furman
PENCILS: Geoff Senior
COVER: Geoff Senior
THE COVER:
The bold colors on this cover are fantastic! That's what caught my eye and made me want to pull this one from the bargain bin.  But beyond that, this cover has a sort of old-school look to it that I really like a lot.  It's cluttered, but in a GOOD way. . .there's something to enjoy no matter where the eye may fall.  This is a bombastic style of cover you don't see anymore, and I didn't even realize how much I missed it until now.
THE STORY:
We begin our tale in the year 8162 and quickly learn that Earth is not a nice place to live.  A unit of government military police are being systematically hunted by a small group of five highly-trained killers.  As this short prologue ends, we find that they have defeated 49 military police in this single engagement. . . 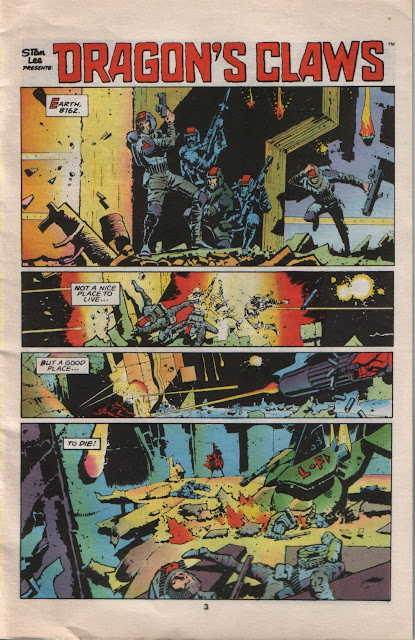 Switching scenes to the Mega-City of London, England, a man named Deller is being briefed on the loss of 7 fully-armed units of military police to the band of killers called "The Evil Dead".
They are former star players of a brutal bloodsport known as "The Game".  The Game has been outlawed, but many former players have turned to crime and are causing quite a bit of chaos.
Deller is given the task of hunting down and eliminate any remaining ex-Game players.  His first assignment is to bring in the greatest Game team of all. . .The Dragon's Claws. . .and turn them into government agents to assist him.  Killers to hunt killers. 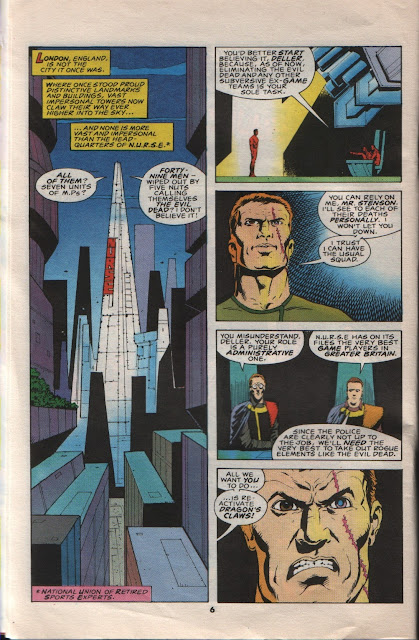 Switching scenes again, we are introduced to Dragon.  Once the leader of Dragon's Claws, the undisputed greatest Game players in the world.  But that's the OLD Dragon.  Now he has a farm, a wife, a son.  A hard life, but a life of peace with people who love him.
But if he's so content with his new life, why does he spend his nights watching video of his old, brutal days playing The Game with the Dragon's Claws? 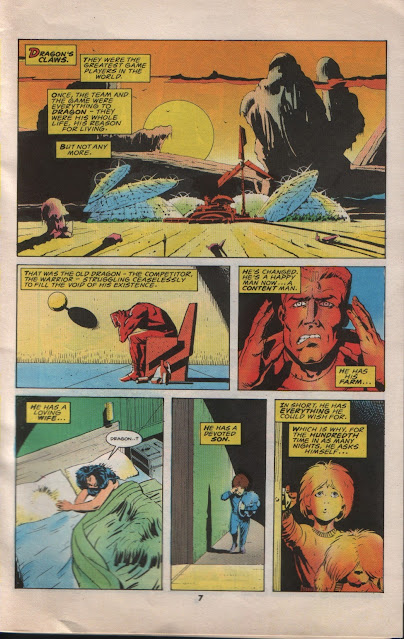 BUT THEN. . .
Deller arrives for a late night visit at Dragon's farm with an offer. . .lead Dragon's Claws again, but this time as government-sanctioned enforcers, and help him hunt down the killers left when The Game ended.  The rest of the team has been contacted, but they won't commit unless Dragon agrees to lead them.
Dragon lets Deller know in no uncertain terms that he's retired and means to stay that way.  He has a new life. The answer is a firm no. 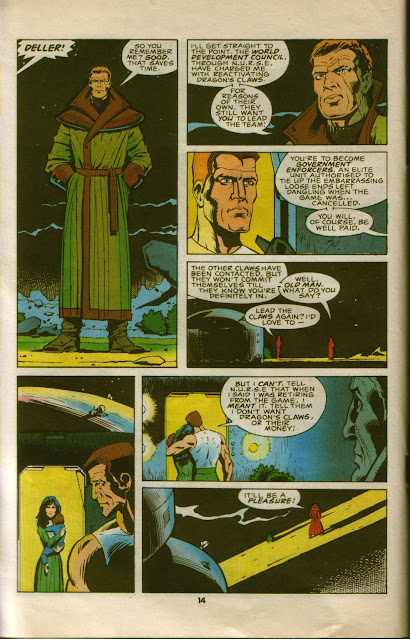 The next day, at the marketplace, Dragon is still a little thrown off by Deller's offer, but in the bright light of day, he knows he did the right thing.
Unknown to Dragon, Deller has hired a gang of minor league ex-Gamers called the Wildcats to try and "convince" the former champion to come around to Deller's side of things. . . 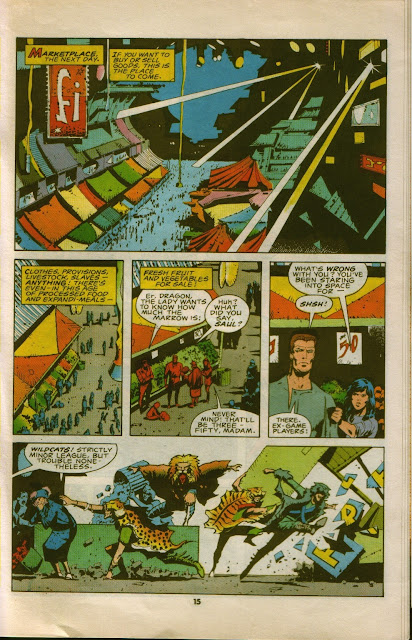 After trashing the marketplace and being fought off by Dragon, the Wildcats follow him back to the farm and attack him as he arrives home! 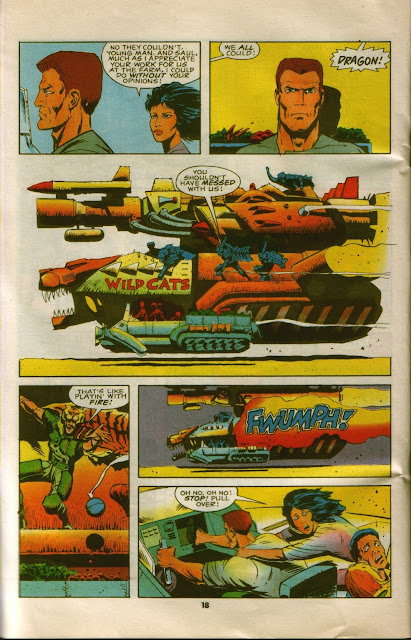 Despite his wife's pleas to not fall into his old killer ways, Dragon leaves his family and takes on the Wildcats single-handedly so they can get to safety.  He begins leading the Wildcats on a chase through the farm buildings. . . 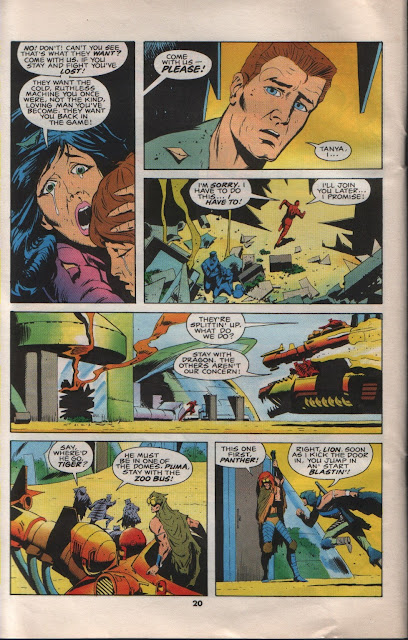 Dragon may be out of practice, but he's still more than a match for the Wildcats as he stalks them through the farm, killing them one by one. . . 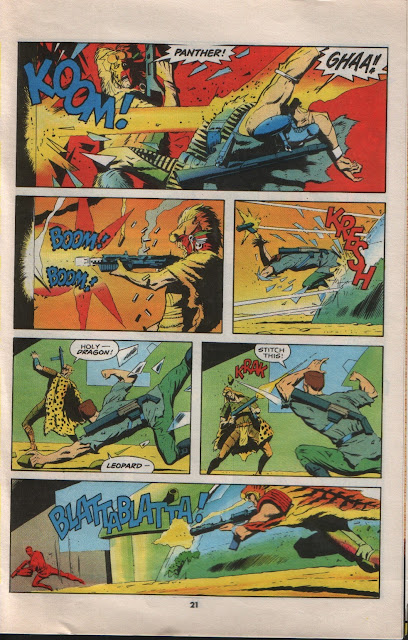 Finally, Dragon defeats the last Wildcat, but he knows his peaceful life is over.  The attacks will continue and his family will always be in danger unless he does what he has to do to prevent it. 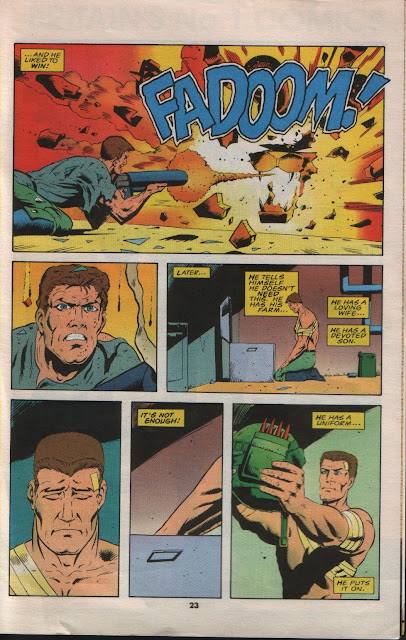 And so Dragon reluctantly leaves his family behind as he suits up and goes to find Deller and take him up on his offer.  The Dragon's Claws are back! 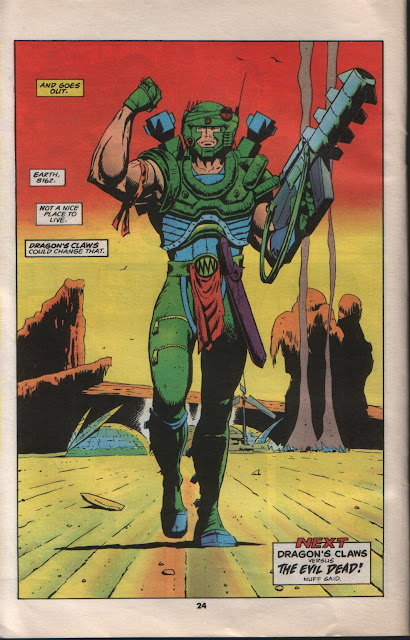 The End. . .To be continued.
THE REVIEW:
All right!  There it is. . .the first issue of Dragon's Claws from Marvel UK.  Let's break it on down!
I liked this one.  I liked it a lot.  I'm a fan of dystopian science fiction and when it comes to comic book dystopia, British writers seem to do it the best. . .and this comic is no exception.  It has a gritty, violent and dark feel that makes it seem like it's taking place in a corner of Judge Dredd's world.  It definitely looks like the sort of story that would be right at home in 2000 A.D.
The story itself is a very simple introduction to the world and the main character.  It follows the extremely well-worn story path of "Former stone-cold killer reluctantly returns to the life he thought he'd left behind".  There are MANY examples of this kind of story out there. . .from Rambo to Blade Runner, Unforgiven and John Wick in the movies.   The Punisher is a good comic book example. The Dark Knight Returns version of Batman is another (minus the killing, of course).
But there's a reason why the "reluctant return to the bad old ways" path is so well-worn, and that's because it's a path that is easy to understand and it just works.  This comic is a perfect example of "If it ain't broke, don't fix it".  As a first issue of a comic I knew nothing about, the familiar story path made this very new reader friendly. . .and that's something I always hope to find in a first issue.
On the art side of things, the dark and gritty art is the perfect complement to this violent tale.  The story fits like a comfortable old bathrobe, but the art is what REALLY hooked me into this!  It reminds me of a less hyper-stylized version of Keith Giffen's art.  As a Keith Giffen fan, that's definitely a good thing!  If nothing else, the art makes me want to read more of Dragon's Claws.

Overall, this was a pretty good read.  Is it great? No.  It's the comic book version of a gritty "Former killer reluctantly returns to the bad old ways" movie.  It's a fast read with a simple story meant as an introduction to Dragon and the dystopian world he lives in.  As a first issue, this hits all the points I expect. . .it's a good introduction and it makes me want to read the next part of the story.  All that AND some very nice artwork too!
I'm going to give Dragon's Claws #1 the official Longbox Junk gold seal of approval.  It's a nice little nugget of Longbox Junk gold.  If you're a fan of the British style of brutal science fiction dystopia then you'll definitely like this!
There's only 10 issues in the series.  It seems it was cut short with story threads dangling because it was an experiment in trying to sell "American-Sized" comics on British newsstands that didn't work because of the smaller size of the comics.  I'm not sure how rare these are over here in the States, but I see that the series has been collected in trade, so if you want to go that route, there's always the internet.
Judging from the two issues I have (#1 and #7) this is well worth checking out for any fans of dark and violent science fiction.
Up Next. . .
I'm not really sure.  I'm thinking maybe a Retro Review.  It's been a while.
In any case, I'll try not to take another whole month doing it.
Be there or be square!