Welcome to Longbox Junk! It's the blog with more comic reviews you never asked for than you could ever ask for! No need to thank me. . .it's just what I DO!

I've mentioned it before, but I have sort of a soft spot in my comic-lovin' heart for early Image comics.  These days, Image has carved out a great spot for themselves as the company you go to when you get tired of superhero stories, but in their early days they were ALL superhero ALL the time.  And it was in the most obviously desperate "We wanna be the new Marvel!" way possible.
To accomplish their goal, Image flooded the market with a LOT of new superhero comics.  There was a point in time in the 90's that they were pretty much throwing anything they could at the wall to see what would stick.  That point in time was around 1996. . .which brings us to the comic at hand!
Blindside was one of the comics that did NOT stick.  It's one of several projects from Image that didn't last more than one issue, even though there were more planned and advertised.  So let's take a look at this unloved and abandoned relic of the 90's and see if there's something here to like, shall we?  WE SHALL! 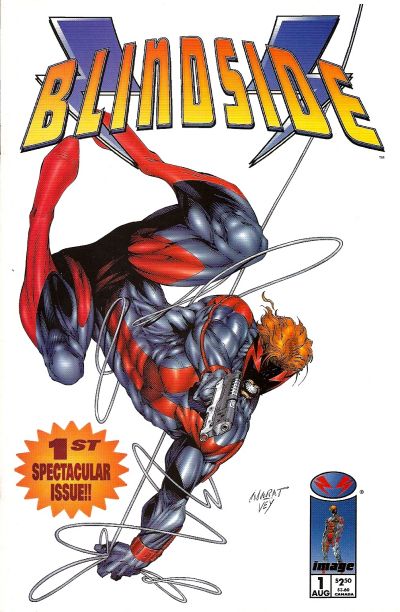 I Spy With My Little Eye
SCRIPT: Marat Mychaels & Robert Loren Fleming
PENCILS: Marat Mychaels & Leo Jimenez, with Chuck Drost
INKS: Al Vey & Sean Parsons
COVER:  Marat Mychaels & Al Vey
THE COVER:
Not bad, in that special 90's-Tastic way.  I'm always a bit of a sucker for monochromatic backgrounds on a comic cover, and the stark white of this one sets of the character portrait very nicely.  I like the bold colors a lot as well.  The logo looks like it was created with the '96 version of Windows Paint, though.  Not good.
Blindside himself is SO 90's that the 90's are like "Can you tone it down a bit?"  Between the gritted teeth, bulging muscles, the McFarlane-Lite twisted pose and tangled rope, and the "It's a mask. . .but with HAIR!", this cover IS the 90's.  Still, not too bad.  Let's get inside!
THE STORY:
We begin our tale alongside Richard Kemp. . .a highly-trained top agent of the ultra-secret "Orion Sector" intelligence agency.  He's observing a meeting between Criminal Mastermind Ronald Quinn and a scientist who has developed some sort of device built into a helmet.
Quinn demands that the device be immediately tested on one of his henchmen, despite the Professor's insisting that it isn't ready. . . 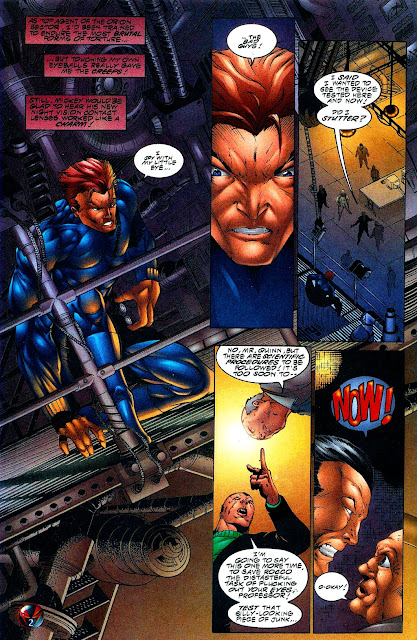 As the device seemingly malfunctions, killing Quinn's henchman, Richard is discovered in his hiding place. . . 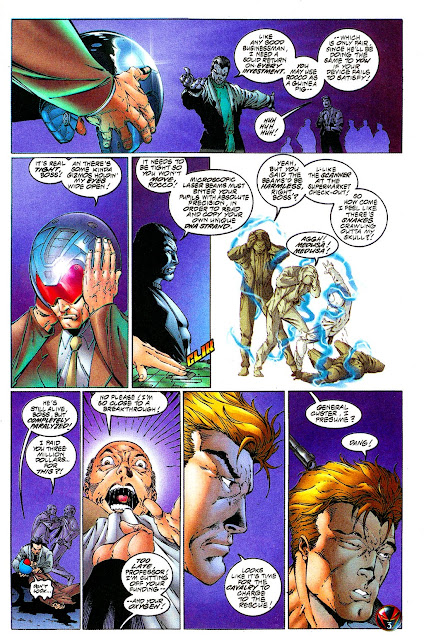 Using the man who found him as a human shield, Richard jumps down from his perch and leaps into action, easily dispatching Quinn's thugs. . .but as he fights, Quinn himself takes the agent by surprise from behind, knocking him out! 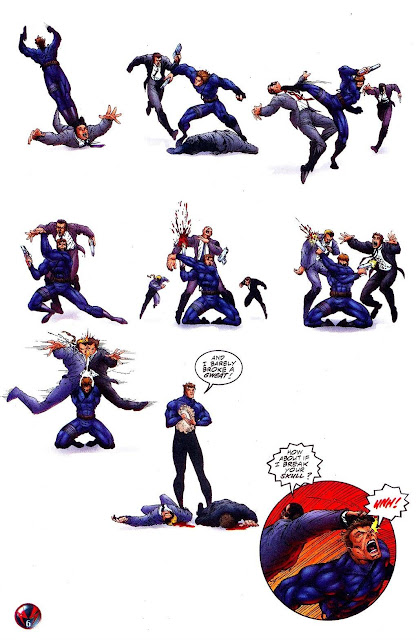 When Richard regains consciousness, he finds himself Quinn's prisoner!  He witnesses Quinn kill the Professor for delivering a faulty device.  Then Quinn puts the helmet on Richard and turns it on. . .promising the captive agent an agonizing death! 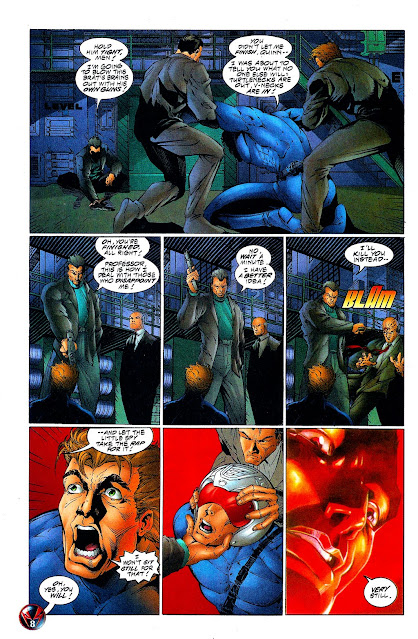 But Richard doesn't die!  Instead, he wakes up handcuffed to a hospital bed and surrounded by Orion Sector agents, including his Uncle Bud. . .who had taken Richard in after his father's death and been his Orion Sector mentor for many years.
After reporting what happened during the stakeout, Richard is shocked to learn that Quinn has an alibi, there was no helmet found, and no other dead bodies. . .just the Professor, killed with Richard's gun and no other prints to be found.
He's been set up! 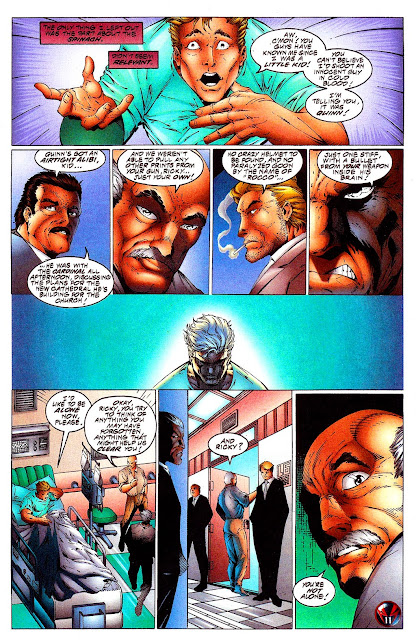 After the Orion Sector agents leave, Richard ponders his situation.  He knows too much to stand trial.  He'll just. . .disappear.  He's devoted his life to Orion Sector, as did his father before him.  Richard sees himself as a patriot and doesn't want to go down without a fight. 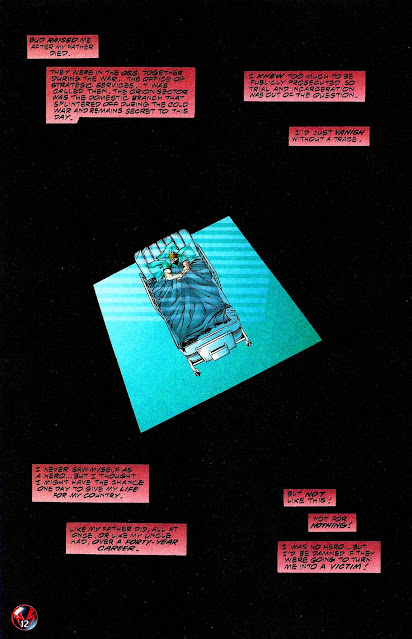 As he agonizes about how to clear himself of the false murder charge, Richard suddenly has some sort of painful mental attack.  As the pain fades, Richard realizes that he can see through the walls!  There are three men with guns outside his room, and they're coming in after him! 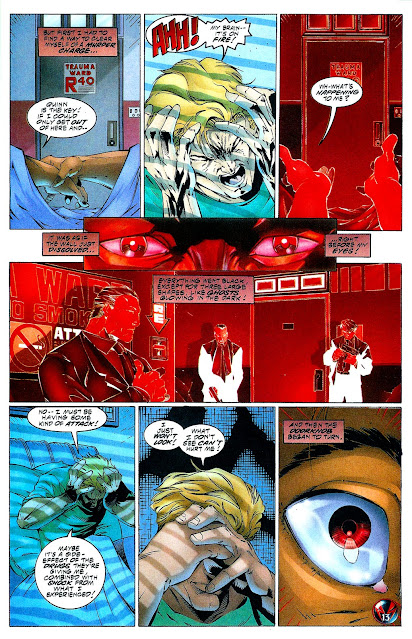 As the armed men burst into the room, Richard is ready for them!  During the fight, he learns that they are Orion Sector agents, sent to terminate him!
Not believing that his Uncle Bud could ever stand by something like this, Richard makes his escape by smashing through the hospital window, declaring that he would take Orion Sector down as he falls, still firing at the men who attacked him. . . 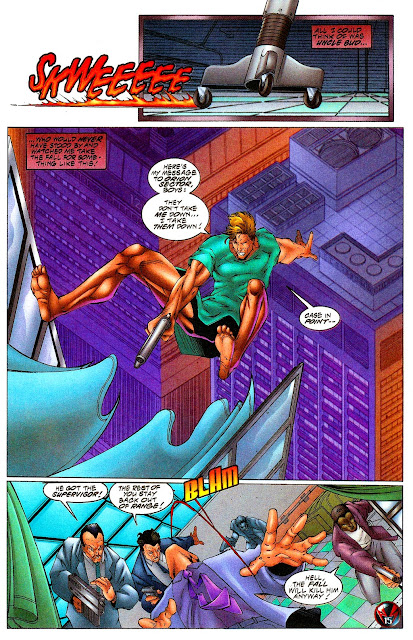 But somehow, the fall doesn't kill him!  Richard is amazed to find himself unharmed. . .but there's more Orion Sector men below, and he's still under fire.  Richard makes a desperate escape through the hospital parking lot, finally managing to steal a motorcycle. . . 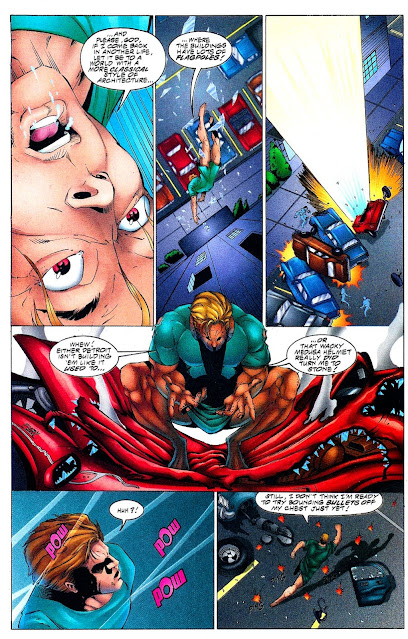 Knowing that he didn't have a chance of eluding his highly-trained pursuers, Richard decides to make use of his own training and attack instead of running, managing to destroy a truck full of Orion Sector agents with a single shot, using his new powers to guide the bullet to his target! 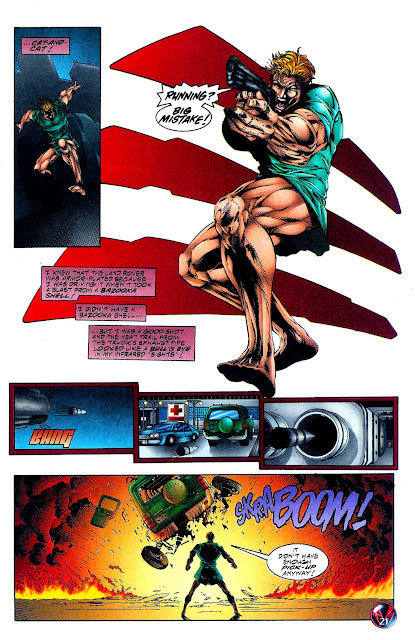 But there's more agents where they came from!  Richard goes into a kind of combat frenzy, attacking the remaining pursuing agents and stealing their car. . . 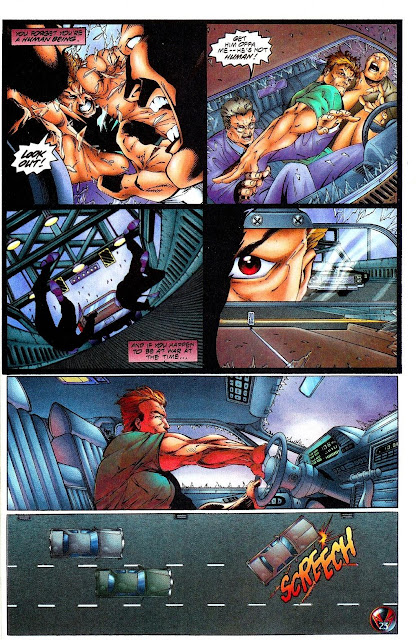 After wrecking the car, Richard manages to escape on foot.  He makes a gritty promise to destroy Orion Sector and anyone behind his betrayal. And from the looks of it, he means it! 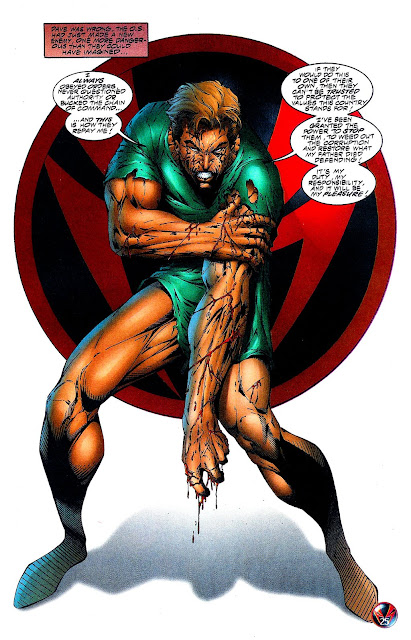 To be continued. . .wait. . .never mind.  There was never a second issue.  The End, I guess?
THE REVIEW:
Okay then. . .there it is. The one and only issue of Blindside.  Let's break it on down!
I really hate to say this, but there's not much to like here.  I can see why the plug got pulled on Blindside so quickly.  There's some decent art here and there, but overall, this comic is so utterly average that I had to read it three times in order to write this review because I kept forgetting the details of the story.  And when you've got such a simple story as the one here, that ain't a good thing.
The framework of the story itself is pretty solid. . .secret agent on the run after being framed for murder and discovering that he's somehow gained some unusual powers.  The powers add a little curve on a well-worn action hero story path, but not enough of a curve to make me want to read more.
The dialogue is pretty stilted and full of exposition.  You can really tell that the writer is actually more of an artist when you read this.  It's definitely a bit of a slog reading this comic. . .and like I mentioned above, it's so utterly average that you forget it almost as soon as you're done reading.
On the art side of things, 90's nostalgia pins this one JUST on the good side of bad.  There are actually some really interesting moments to be found (The stark white background page of Blindside attacking multiple gunmen I scanned above is definitely a standout), but there's just not enough of them to elevate this comic much.

Every comic is a labor of love for someone.  The letters page in Blindside tells me that Marat Mychaels created this character when he was 14 years old and had been waiting years for a chance to bring his idea to the comic world.  Unfortunately, the actual execution of Blindside when he finally got that chance didn't do Mychaels' enthusiasm for the character any justice.
From what I see, he took the character elsewhere, where it didn't fare much better. . .2 issues of an aborted mini-series and a couple of guest appearances.  I give Mychaels credit for trying, but I guess sometimes things just don't work out.
In my humble opinion, Mychaels isn't much of a writer. Blindside might have worked if he had recognized this and let someone else write his character. . .but the early days of Image are littered with failed projects where one guy tried to wear all the hats.  This is a fine example of exactly that.
Unfortunately, I can't really recommend Blindside, except as a curiosity. . .an abandoned relic of the 90's that may interest someone just for that.  The writing is somehow overblown and forgettable at the same time.  The art has moments, but not enough of them.  There's really not much to like here.
Up Next. . .
It's the origin story of one of DC's most unusual superheroes and his team. . .
CAPTAIN CARROT AND HIS AMAZING ZOO CREW!
Guest Starring Superman because he must have lost some sort of bet.
Be there or be square!