Longbox Junk Halloween Something is Killing the Children #1

It's actually been pretty busy at work for this time of year, so I haven't been able to put out quite as many Halloween goodies as usual, but I think my spotlight on new horror comics has been a pretty good time.
I really like the resurgence of horror comics we're having right now (now if only Western or War comics could follow suit, I'd be a happy man) and I hope it continues for a while, because there's some good stuff out there for horror fans.
The comic at hand seems to have been one of the catalysts for the new horror comic trend.  It came out toward the end of 2019 and IMMEDIATELY exploded in popularity. . .as well as back issue "value" for what that's worth.  And when I say the back issues are a bit pricey, I mean that (according to the fine folk at COMIC BOOK REALM) the EIGHTH PRINT (AKA the cheapest print) of the first issue is "valued" at about Twenty Bucks.  Earlier prints and variants are topping a hundred bucks!
In other words, this comic ain't Amazing Fantasy #15, but it sure ain't Longbox Junk either.
But lucky for me, I bought the first issue when it came out, not because of any hype, but because I like to support smaller publishers like BOOM! Studios and always have a few comics that aren't from "The Big Two" on my pull list.  I don't go hunting "hot" comics, but sometimes I get lucky, I guess.
ANYWAY. . .
It wasn't long after this comic came out that I started to notice more and more new horror comics on the stands, so thank you BOOM! Studios for being the spark.  Now can you do the same for Western comics, please?
SO. . .
What we have here is the first issue of what's probably THE hottest new horror comic out there.  Now the question becomes:  Is the hype deserved?  Is it any good? Let's find out!
SPOILER ALERT!  This series is still extremely popular and ongoing (Issue 20 out as of this review), so even though the story has gone through several arcs already, I'll keep the spoilers to a minimum.  If you want NO spoilers, just scroll on down to the "Conclusion" for my spoiler-free take.  END SPOILER ALERT.

SOMETHING IS KILLING THE CHILDREN #1 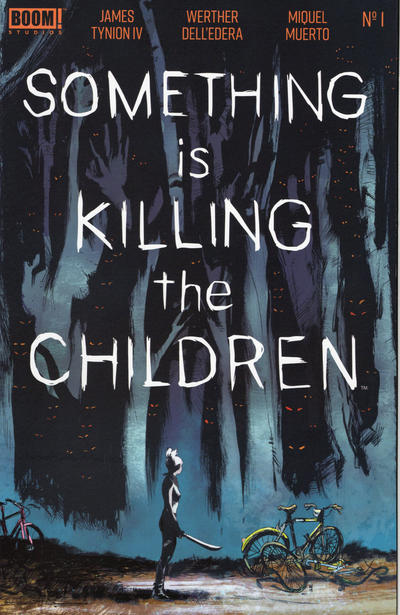 THE ANGEL OF ARCHER'S PEAK PART ONE
SCRIPT: James Tynion IV
PENCILS: Werther Dell'Edera
INKS: Werther Dell'Edera
COVER: Werther Dell'Edera
THE COVER:
It's not a bad cover, but the title takes up WAY too much space for some reason.  The figure at the bottom seems almost like an afterthought.  I like the creepy eyes peering out of the forest, but truthfully this cover seems to have a lot of wasted space.  I guess they ALL can't be winners.  Let's get inside!
THE STORY:
The children of the town of Archer's Peak have been going missing for weeks, those that are found have been ripped to pieces. After an outcast boy named James' friends are slaughtered in the woods by an unknown assailant, he tells the police that he saw a horrific creature killing them, but nobody believes him.
Not long after, a mysterious stranger arrives in town. . .a young blonde girl.  She tells James that she believes him, and that she's here to kill the monster.  James asks if he can help.
To be continued. . .
THE REVIEW:
The question at the beginning of this review was whether or not this is worth the hype.  My honest answer is no.  I can't figure out WHY this comic is so "hot" and the back issues are so "valuable".  I bought the first three issues before I took this off my pull (3 is my "Buy or Die" criteria for new series.  If they can't hook me in 3 then I'm moving to something else) because the story just didn't grab me.  I really don't see what makes this series so popular.
The story is okay, but not much more than that.  It's not BAD, it's just that the dialogue seems forced.  Normally Tynion is a solid writer.  I really liked his run on Detective Comics, and his writing made me like that title better than DC's tentpole Batman series.  Unfortunately this isn't his best work, in my extremely humble opinion.  The conversations have a stilted feel to them, and seem to be geared more toward exposition than character development.
The framework the story hangs on. . .something is killing the children and someone arrives to help. . .is a simple one, but the stilted, wordy conversations make something simple seem contrived and complicated.  This is NOT a complicated story.  This unnecessary complication of simplicity becomes worse going forward into the next couple of issues.
As far as the art goes. . .
Also disappointing.  Some great art might have gone a long way toward evening out the lackluster writing.  Unfortunately, it doesn't seem there was much effort put into it.  Like the story, the art isn't BAD, it just could be a lot better.
It's pretty sketchy throughout the issue, and looks somewhat unfinished in places.  The main focus of the artist seems to be on the giant anime-style eyes of the mysterious monster hunter.  Otherwise, the art tells the story, but doesn't strive to do much more than that. 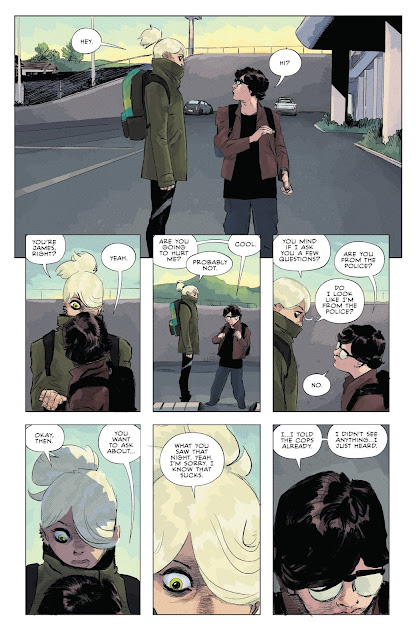 Overall, this first issue of "Something is killing the children" is disappointing.  The writer takes a simple idea and tries to make it mysterious and complicated through wordy, stilted dialogue full of exposition. . .but at the same time, answering no questions.  It's backed up by sketchy art with a strange focus on one character's eyes.
This story isn't BAD, but it's certainly not as great as one would think, based on all the glowing reviews and back issue "value".  I would definitely call this one overrated.  If you want to check it out without shelling out a paycheck worth of cash on overpriced back issues, it's been collected.  Don't say I didn't warn you, though.  Despite the popularity of this series, I can't really recommend it.
Up Next. . .
I'm not sure I can get any more Halloween fun in, since I'm pretty busy at work, but I'll try.  Not sure what, though.  I guess if I can get another one in, I'll just have to surprise myself.
Be there or be square!