It's October!  It's that special season where the vegetable nobody cares about any other time of year suddenly costs three bucks a pound.  But here at Longbox Junk, we aren't carving pumpkins, we're reviewing comic books!
This year, I decided to go trick or treating down a different street than usual by spotlighting some NEW horror comics that are out on the shelves right now (or were, pretty recently).  We started the party off strong with a couple of very nice treats. . .but then we started to go downhill a bit when we came across a couple of pieces of candy corn.
So what will we get this time?  Let's find out!
SPOILER ALERT!  This series is finished at this time.  But since it's also pretty new, I'll keep the spoilers to a minimum. If you don't want ANY spoilers just scroll down to the "Conclusion".  END SPOILER ALERT 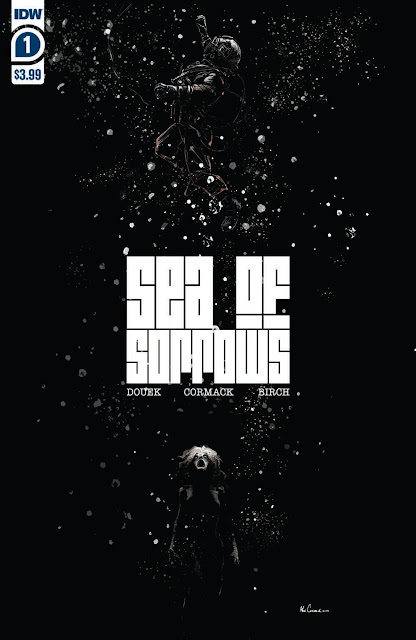 SCRIPT: Rich Douek
PENCILS: Alex Cormack
INKS: Alex Cormack
COVER: Alex Cormack
THE COVER:
I'm sort of a sucker for a monochromatic background on a comic cover, and the bold darkness of this one does catch the eye.  BUT. . .I think it might be just a little TOO stark.  It's well done, but there's a lot of empty space and barely a bit of color for variety.  I know it's supposed to evoke the darkness of the ocean depths, and it does that very well, but there's really not much else to it. Let's see what's inside!
THE STORY:
Our story takes place off the coast of Newfoundland, 1926.  A former German naval officer hires the SS Vagabond and her somewhat unsavory crew to go in search of a sunken U-Boat rumored to have been carrying a cargo of German gold at the end of the war.
On board the Vagabond, tensions mount between the crew of the ship and their employer's partners.  Danger and double-crosses are in the air as the two groups plot against each other.
Below, in the darkness on the ocean floor, the salvage team's deep sea diver discovers the wrecked submarine and confirms the valuable cargo in the hold. . .but he also encounters a strange creature that seems to be watching him!
The crews celebrate as the diver brings up a gold bar as proof that their hunt is successful, but as the party continues into the night, we learn that there's more to the naval officer than what we think, as he begins to tell the diver the strange tale of how the U-Boat was sunk. . .
To be continued. . .
THE REVIEW:
All right. . .not bad.  Not bad at all!  This comic hits the sweet spot that I expect a first issue to hit. . .it makes me want to read the next issue.  The story is more of a pulp adventure tale with some horror elements, but that's fine.
I like the character-driven slow burn introduction, the feeling like each character has their own agenda.  I like the post-WWI era setting a lot.  It's a great choice for a pulpy horror story like this!  And then there's the ending, with the grizzled naval veteran beginning to drunkenly regale the diver (an army veteran who served a nightmarish tour in the trenches) with the REAL story.  It hooked me into the next issue in a big way!
The art on this story is nothing short of amazing!  The artist not only portrays the scheming expedition members as flawed individuals that are easily distinguished from each other, but he also perfectly embodies the darkness and isolation deep under the sea.  His style was a great choice for this early 20th century pulp/horror tale! 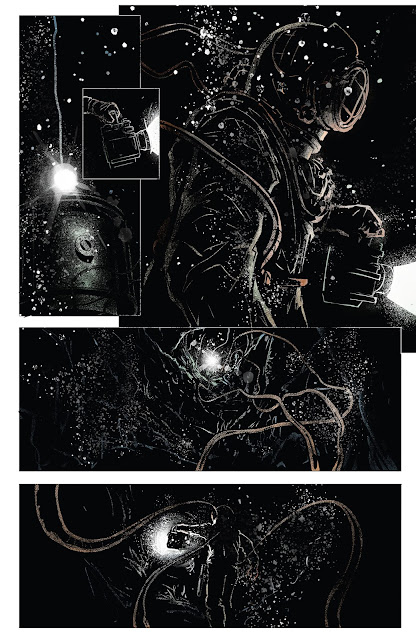 I was getting a little worried after hitting two clunkers in a row, but Sea of Sorrows came to the rescue with a pulp adventure/horror story that delivers some great character work and a narrative that hooked me into immediately wanting to read the next issue.  The art perfectly evokes the post-WWI setting above the waves, as well as the darkness and isolation at the bottom of the sea.
Overall, this one's a winner!  If you're interested in some good pulpy horror, then definitely take a look at Sea of Sorrows.
Up Next. . .
What happens when five kids find a human brain in a jar?  Let's find out!
It's "Piecemeal" from Aftershock Comics. . .
Be there or be square!