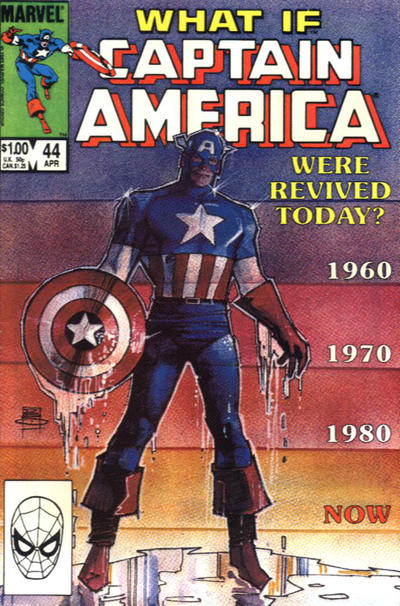 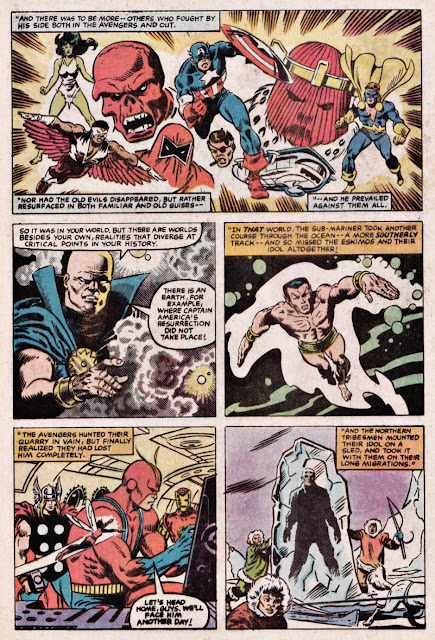 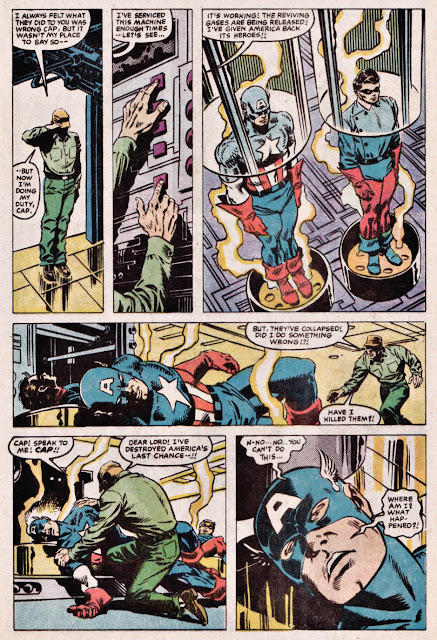 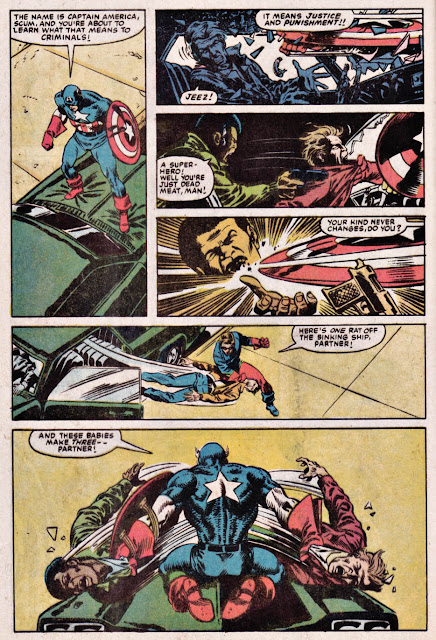 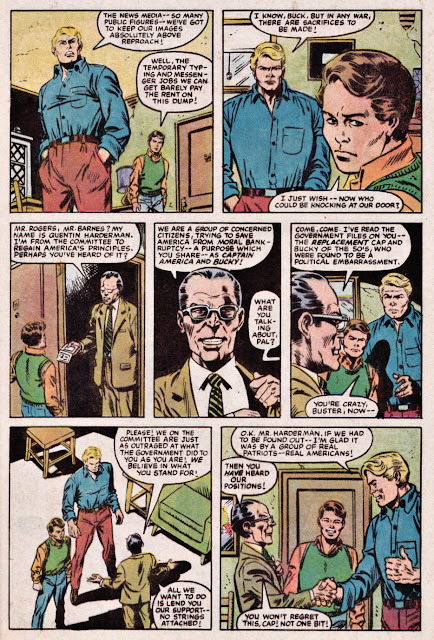 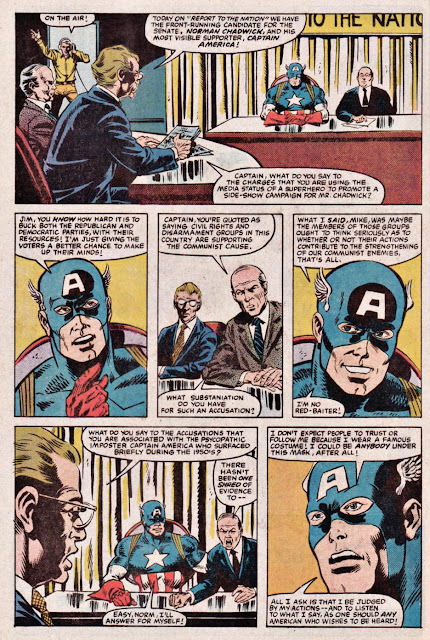 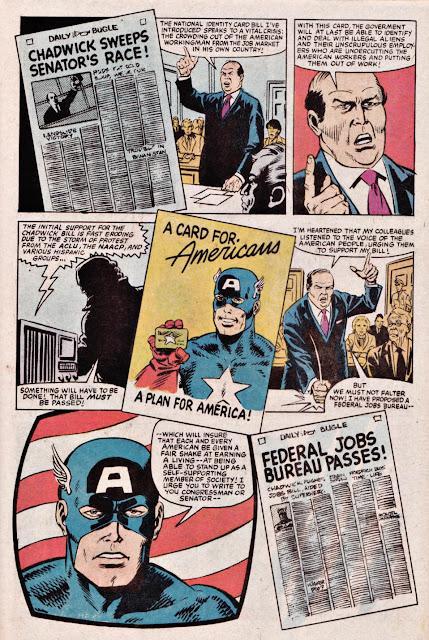 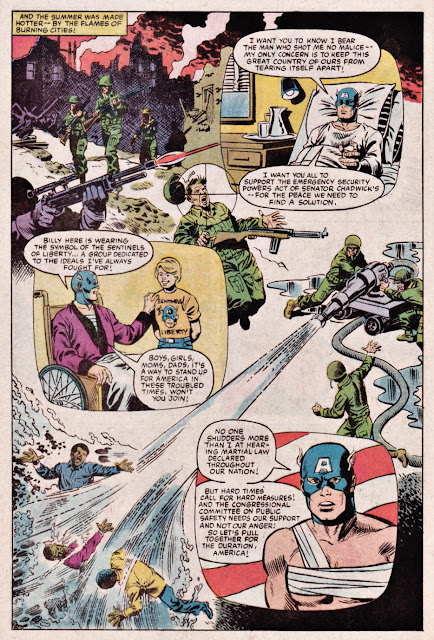 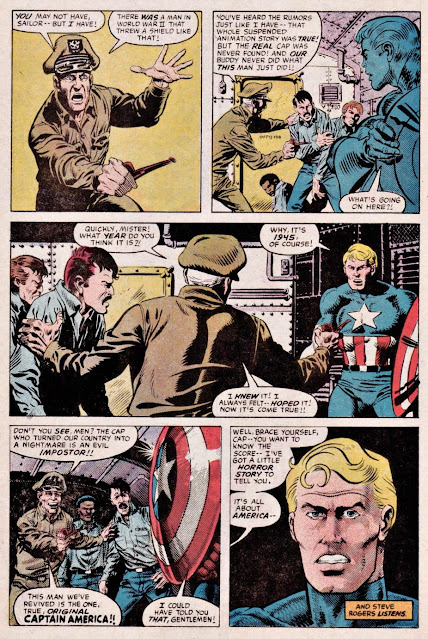 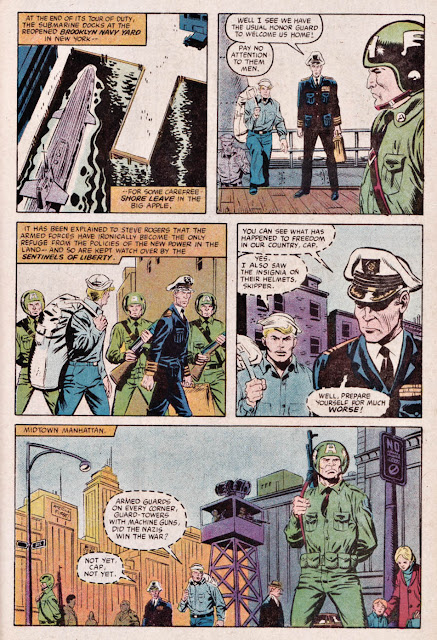 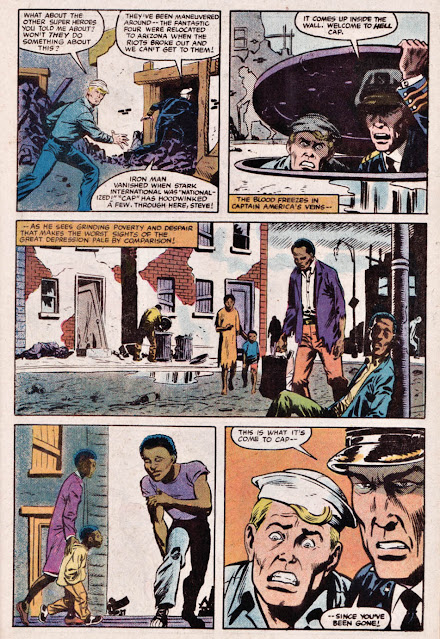 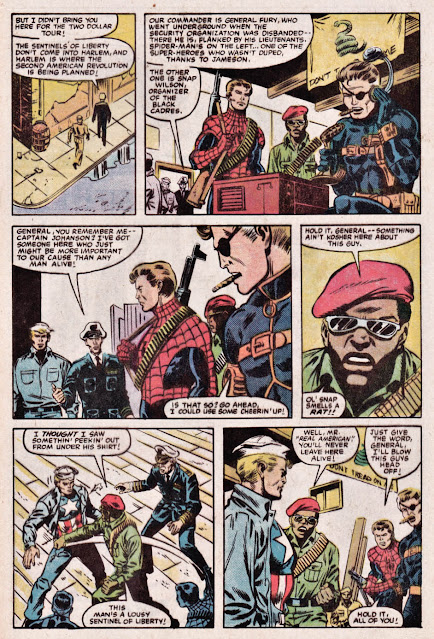 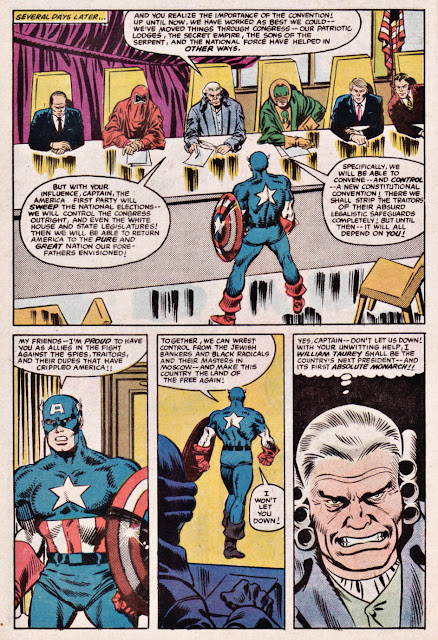 Shortly thereafter, the scene shifts to Madison Square Garden, where the America First Party is holding a huge, heavily-guarded rally to finally cement their complete political control of the United States.  The underground infiltrates the stadium and then attacks as the imposter Captain America makes his speech! 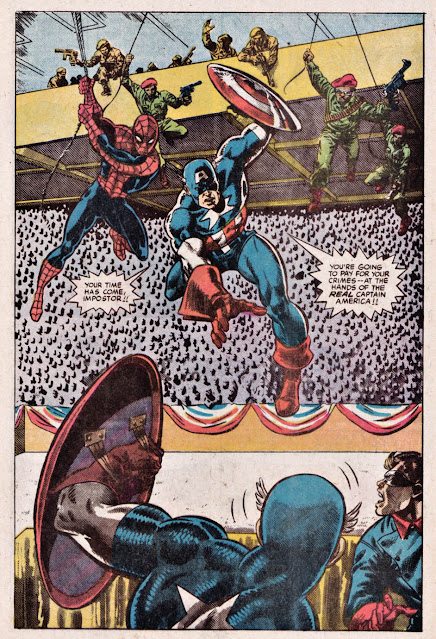 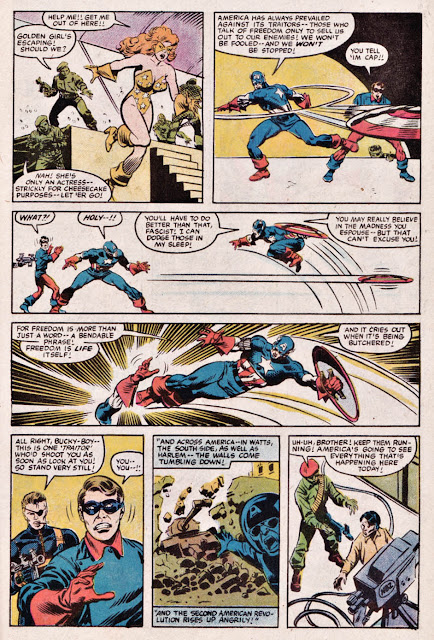 Eventually, Captain America prevails, beating the imposter unconscious on national television.  The people believe HE'S an imposter until Cap makes a rousing speech and convinces them that he's the genuine article. 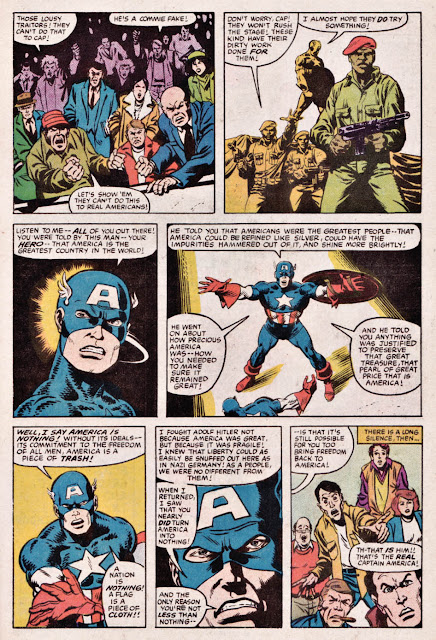 Once Captain America has convinced the people that he's back, they chant his name in adulation, but he stops them. . .saying that he won't allow himself to become such a large symbol that people can't think for themselves.  At the end, the gathered crowd agrees and they join in with Cap singing "America The Beautiful" as the nation moves forward into a new day. 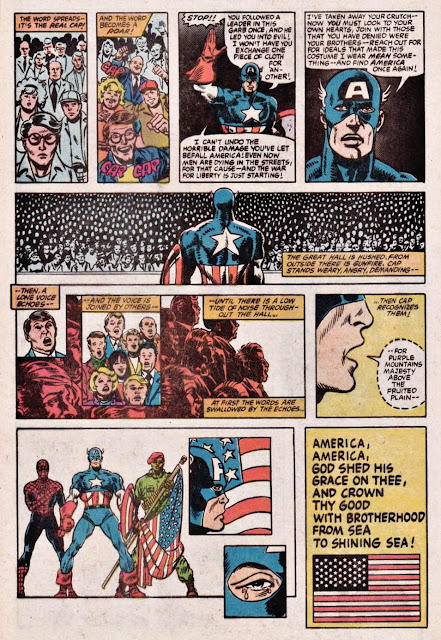 The End.
THE REVIEW:
So there's the story.  Let's break it on down!
BUT FIRST. . .
THIS IS YOUR TRIGGER WARNING!
If you are the sort of political obsessive who simply cannot stand ANY negative criticism of right-wing conservative values, then DO NOT read this comic OR this review.
OR. . .
If you are the sort of political obsessive who simply cannot stand ANY positive affirmation of right-wing conservative values, then DO NOT read this comic OR this review.
YOU HAVE BEEN WARNED!
Okay. . .everyone in that's staying in?  Last call.  Let's do this!
As you can probably tell by the trigger warning above, this is a comic that is rooted deep in political commentary.  If you are a die-hard conservative, this comic will be uncomfortable to read.  If you are a die-hard liberal, it will be just as uncomfortable.  If you're a moderate like me, you'll find it an interesting time capsule of Reagan-Era politics that reflect on current events a bit more than they should.
I don't really want to start any sort of political discussion or alienate any readers of Longbox Junk, so I'm going to try and judge this story on the story itself. . .just be aware that this comic is basically a 52 page slam on conservative tendencies to wrap political policy in the red, white, and blue.  But then again, it's ALSO a slam on the liberal tendencies to downplay patriotic beliefs as racist or oppressive.  Like I said, this comic was written in 1984, but it could have just as easily been written last week.
SO. . .
The story itself is a fairly typical "What If?" offering, where one little change causes EVERYTHING to shift in a bad way.  In the story at hand, everything shifts toward patriotic fascism when the Avengers disband and the "Commie Smasher" failed Captain America experiment in recreating the super-soldier serum from the 1950's, William Burnside, is unleashed on America and becomes a symbol of all the absolute worst the country has to offer, but wrapped in a patriotic cloak of red, white, and blue that appeals to the population.
Burnside was co-created by Sal Buscema (along with Steve Englehart), but hadn't been used much up to this point, except in a short story arc (Captain America #353-356) as an explanation as to how Cap could be smashing Commies in the 50's when it was established in early Avengers issues that he'd been on ice since 1945.  So it was interesting to see him used here as the antagonist.  The character is actually well-written and you almost feel sorry for the way he's been used by unscrupulous politicians and criminal elements in this story.
Most of the story focuses on how bad America has become under the influence of Burnside, and how willingly the population has gone along with his obsessive anti-Communits, racist, and anti-immigrant beliefs. . .which makes the sudden swing back to patriotic flag-waving at the end of the story feel sort of rushed and frankly just a bit cheesy that one single speech from the real Captain America suddenly makes everything okay, and everyone from sea to shining sea is just singin' Kumbaya. . .er. . . Bless America together as one united nation.
On the art side of things. . . Of the Buscema brothers, I like John's art a little better, but Sal Buscema is still one of the better Bronze Age artists in my book.  His art here is energetic and expressive, with some REALLY great panels scattered throughout, making this one very nice-looking comic, with art that definitely still stands up today.

Overall, this was an interesting comic from a political point of view.  It's a commentary on Reagan-Era politics leaning heavily to the left that actually reflects pretty well on the current American political divide.
But beyond that, it's a pretty darn good "How bad can things get?" story about politics wrapped in patriotism. . .even if the ending IS a pretty hard and sudden swing in the opposite direction, and sort of cheesy.
The art in this comic delivers a solid visual half. . .from the great cover to page after page of some pretty darn fine Bronze Age pencils from Sal Buscema.
All in all, unless you're the type to get politically triggered by either criticism OR affirmation of right-wing conservative messages, I can highly recommend this story, especially if you're a fan of Captain America in general and are interested in an early appearance of "Commie Smasher" William Burnside.
Up Next. . .
I got in late on July for Captain America comics, so let's ride that Red, White, and Blue train right into August!  It's Captain America meeting Black Panther during WWII. . .with Nick Fury and his Howling Commandos mixed in!
It's Marvel's four-issue "Captain America/ Black Panther: Flags of Our Fathers" series.
Be there or be square!