Welcome to Longbox Junk, where the comics are cheap and the reviews are free!
It's Star Wars month here at Longbox Junk!  Unfortunately, with pandemic restrictions being lifted and life getting back to (somewhat) normal, I've been super-busy at work (night manager of a hotel) and haven't had the time I would normally like to spend on readin' and reviewin' some great Star Wars comics.
That said, I think I can squeeze in another visit to that galaxy far, far away before the month ends.
The comic at hand is one of the more unusual items in my collection, and I've been meaning to spotlight it here at Longbox Junk for a while.  It's a hardcover one-shot comic from Dark Horse's days holding the reigns to the Star Wars comic franchise.
It's one of the many tie-ins to Dark Horse's multimedia Star Wars "Event" called "Shadows of the Empire", which included interconnected novels, comics, trading cards, toys, a soundtrack album, a video game, and a handful of other items revolving around a tale set after Empire Strikes back and setting the scene for Return of the Jedi.   It was actually a really interesting and ambitious project.
What makes the comic at hand different than other comics is that it's a pop-up comic!  As far as I can tell, it's one of the few that's ever been made (until recently) with adult readers in mind, and was actually the first pop-up comic book produced.  Due to the unusual nature of the comic and the increased bulk of the pop-up mechanics, the comic is a short one. . .at 14 pages it's more of a vignette than a complete comic story.
Because it is such a short comic, I decided to go ahead and scan it in full for this review.  I quickly found out that pop-up books are NOT scanner-friendly at all, so please excuse the iffy quality of the pictures below.  They don't do justice to how great this comic looks in the hand.  I've included a few pics of the comic folded out as well, to try and give more of an idea of how it actually looks.
Enough introduction!  Let's take a look at this unusual little artifact of Dark Horse Star Wars, shall we?

BATTLE OF THE BOUNTY HUNTERS 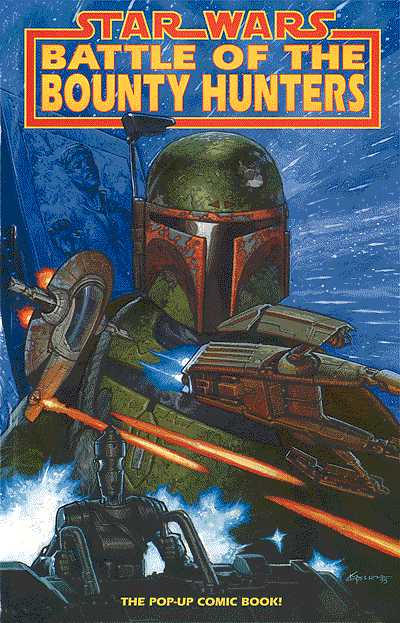 SCRIPT: Ryder Windham
ART: Christopher Moeller
COVER: Christopher Moeller
THE COVER:
Christopher Moeller might not be the most famous or prolific comic artist out there, but he's got a detailed, gritty style that fits the Star Wars universe perfectly, especially when it comes to the darker corners inhabited by characters like Boba Fett.  This is a fantastic example of his work. . .a collage of images held together by a very nice portrait of the fan favorite Bounty Hunter.  If this wasn't an awkwardly-sized hardcover, this cover would definitely take some turns up on the "Wall O' Covers" in my office at work.  Let's get inside and feast our eyes on some more of Moeller's art!
THE STORY:
We start off shortly after the events of The Empire Strikes Back.  Bounty Hunter Boba Fett is delivering his target, Han Solo, to crime lord Jabba The Hutt on Tattooine.  Solo has been frozen alive in carbonite by Darth Vader.  The bounty hunter anticipates an easy time collecting on Solo, but when he comes out of hyperspace over Tattooine, he spots a rival bounty hunter waiting for him. . .the droid called IG-88! 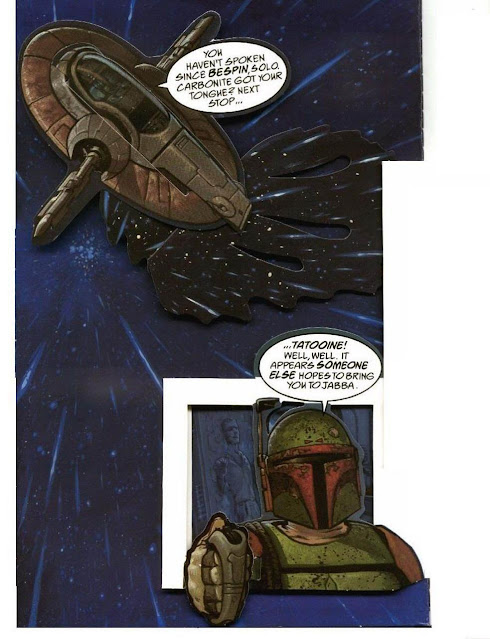 Acting quickly, Fett targets and destroy's IG-88's ship, but his easy victory is TOO easy.  It was a distraction from IG-88's actual ship, which attacks Boba Fett, taking him by surprise! 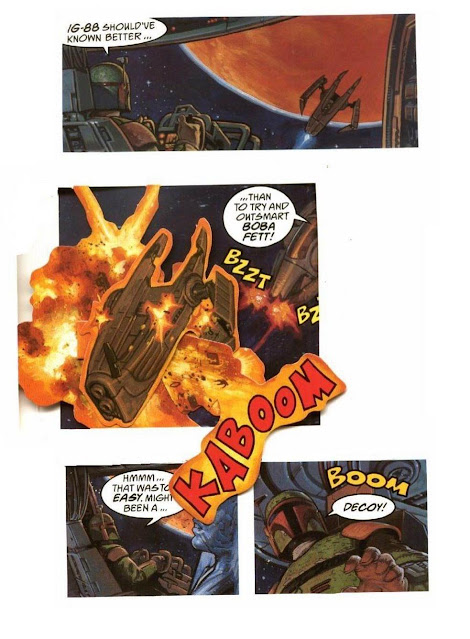 Once again, apologies for the way the pictures look flattened on a scanner.  Here's a camera shot of the first couple of pages folded out, so you can get more of an idea of how this comic actually looks. . . 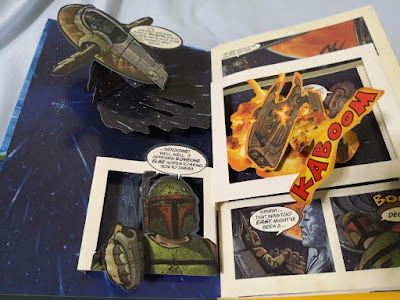 After damaging Boba Fett's ship with his surprise attack, IG-88 demands that Solo be surrendered to him and he MIGHT let Fett live. . . 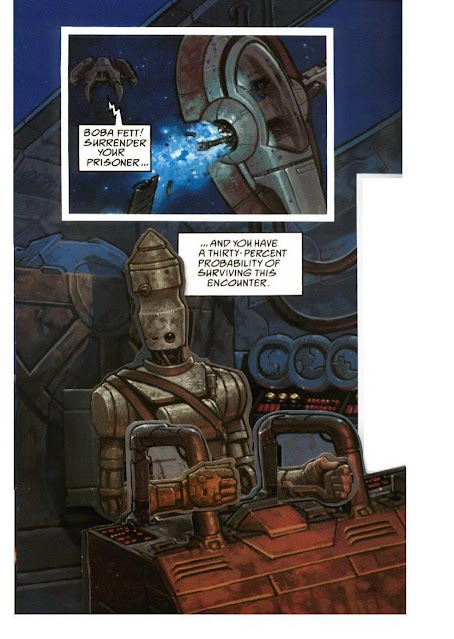 Despite the iffy situation, Boba Fett isn't one to be taken down like a chump.  The bounty hunter pulls one of the many tricks he holds up his sleeve and hits the inertial dampers (the brakes) on his ship, putting him behind IG-88 and lined up for the perfect shot! 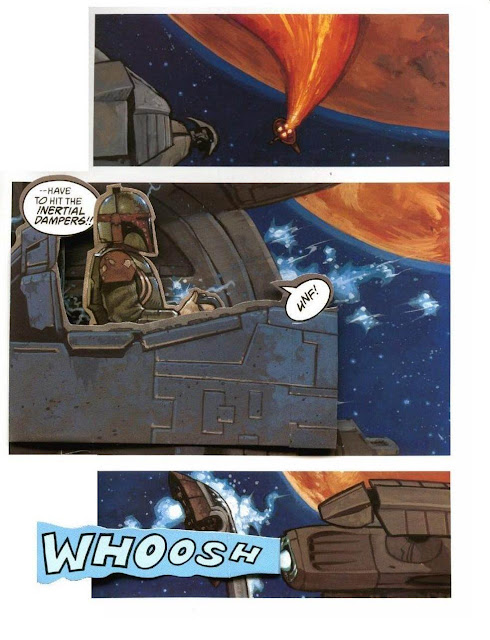 Boba Fett takes the shot, destroying IG-88 in a spectacular explosion!  His rival now out of the way, Fett continues to Tattooine to deliver his bounty to Jabba The Hutt. 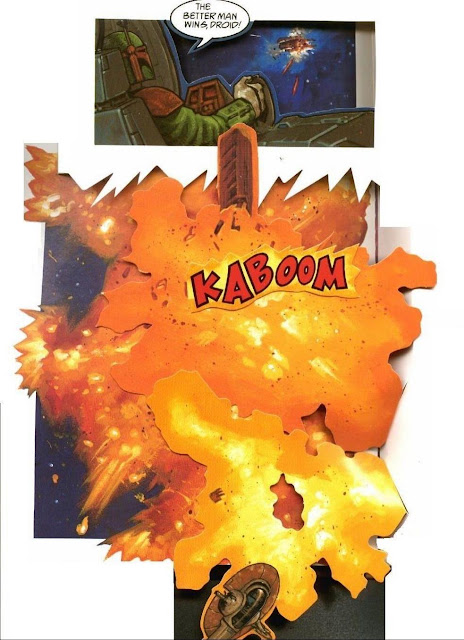 As Boba Fett lands, his ship is noticed by an Imperial patrol.  They investigate and confront the bounty hunter, telling him it's a restricted area. . . 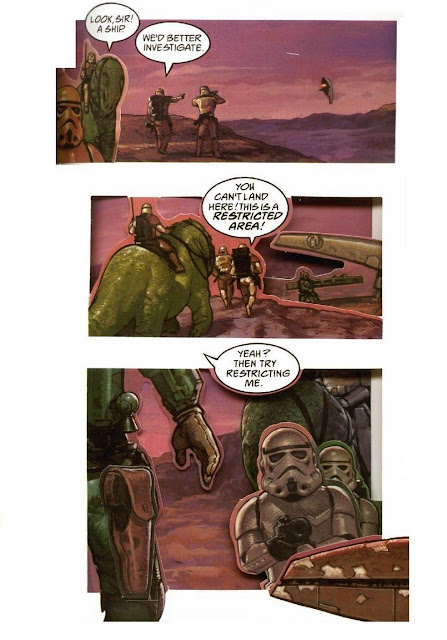 Unfortunately for the stormtroopers, Fett doesn't care much about Imperial restrictions.  He opens fire and quickly decimates the patrol before continuing on to Jabba's desert palace, where the crime lord's lieutenant, Bib Fortuna, meets him. 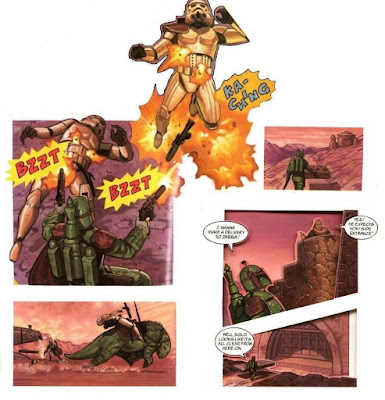 On his way into Jabba's palace, Boba Fett is attacked by a giant sand dragon!  However, it's no match for Boba Fett, who takes the creature down easily.  Suspecting that the conniving Bib Fortuna tried to lead him into a trap, Fett forces him at gunpoint to lead the way to Jabba The Hutt's throne room. 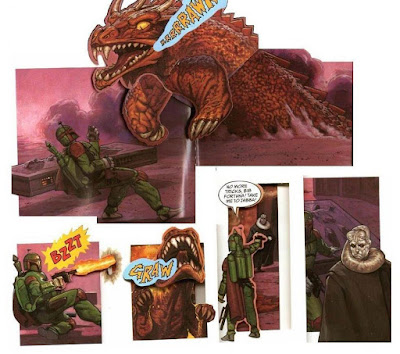 Below is another pic of the comic folded out, to give more of an idea of how it actually looks. 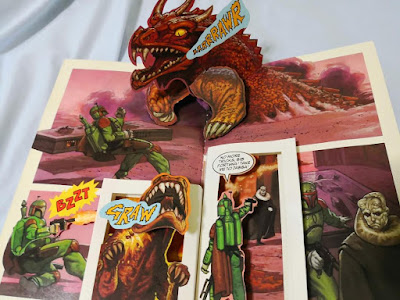 In Jabba's throne room, Fett negotiates for an extra bonus because he brought Solo in alive.  Jabba agrees, but has another proposition for the bounty hunter. . . 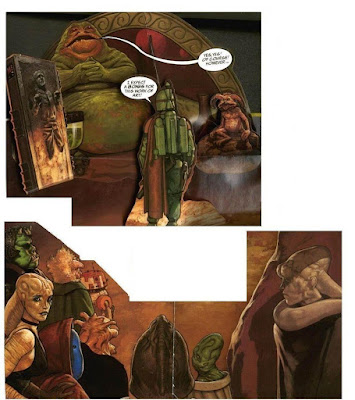 Knowing that Solo's friends will eventually attempt a rescue, Jabba offers Boba Fett more money if he stays on for a while as protection.  Fett agrees without hesitation. . .setting the stage for the opening scene of Return of The Jedi. 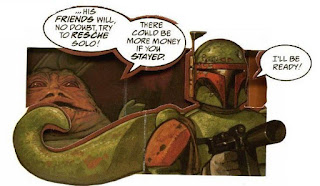 The End.
THE REVIEW:
Like I said in the introduction, this is a very short and simple story that's really more of a vignette.  It's actually an abbreviated version of some of the same events as depicted in (mostly) the first issue of the main "Shadows of the Empire" comic series, but featuring the fantastic painted art of Christopher Moeller instead of the more standard comic art (Which is still some pretty darn nice work by Kilian Plunkett, with inks by P. Craig Russell) in the regular comic. 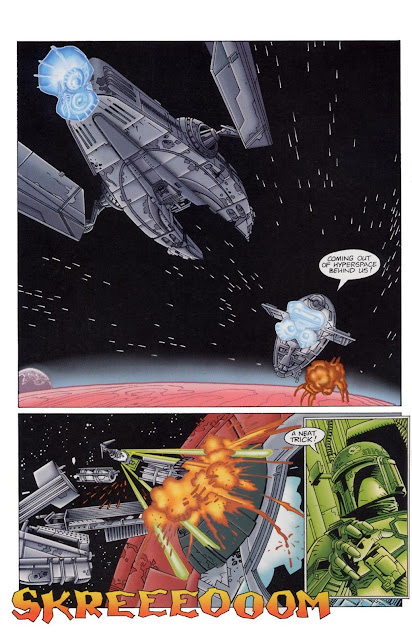 Shadows of the Empire, Issue #1
Despite the extremely slim story to be found here, the real star of THIS show is the pop-up mechanic, featuring the painted art of Moeller.  As I mentioned in a couple of places above, the flattened images of the comic on the scanner don't really do it much justice.  Even the couple of regular camera shots don't quite display just how nice this unusual comic actually looks when it's folded out.
I was familiar with Moeller's gritty, realistic, painted style from my favorite series to come out of DC's short-lived Helix imprint, "Sheva's War".  A fine little nugget of Longbox Junk gold itself, and highly recommended for any fan of good hard military science fiction.  I've always wanted to track down and enjoy more of his work, but he wasn't the most prolific artist.  His art in this comic doesn't disappoint!
With interesting angles, perfect colors, and gritty realism, the art in this short comic is simply a feast for the eyes!

There's not much story to be found here, and what little there is, is a retelling of events in another comic.  But the story isn't the draw here.  This unusual pop-up comic book features some really great painted artwork that makes me want more!  At the end of the day, there's not much to Battle of The Bounty Hunters, but it IS fun.  Say what you will, there ain't nothing wrong with having some fun in a comic book!
It might be a little hard to track down a copy, but Battle of The Bounty Hunters is just a fun little Star Wars artifact that Star Wars fans both young and young at heart will surely enjoy.  I give it an official Longbox Junk gold seal of approval.
Until next time, remember that comics are worth more than money!