Welcome to Longbox Junk, the best place to find comic reviews you never asked for!

Once again, apologies for my sketchy posting "schedule" this time of year.  The summer tourist season is starting to gain some steam and my spare time at work for readin' and reviewin' comic books is getting a little sparse.
ANYWAY. . .

It's the merry month of May! Spring is in the air, the grass is green, the flowers are blooming.  Summer is just around the corner.  But most importantly, it's STAR WARS month!
Star Wars is what got me into comic collecting in the first place, so when May rolls around I like to spotlight a few of the comic book adventures that have taken place in that galaxy far, far away.
For quite a while, Dark Horse had the rights to publish Star Wars comics, and they definitely ran with it in a big way.  They went WELL above and beyond the established lore of the movies and put their own stamp on Star Wars. . .for better AND for worse.  The Dark Horse Star Wars mythology is dense, convoluted, and a little hard for newcomers to jump into.
That said, toward the end of their time holding the keys to Star Wars comics, Dark Horse stepped away from their tangled continuity and started to return to the basic foundation of what made Star Wars great in the first place. . .the tight relationship between the original heroes of the Star Wars saga, Luke, Han, Chewie, and Leia, as they fought against the evil Empire.
The comics at hand are a perfect example of Dark Horse's return to the simple roots of Star Wars, being a look at the four main heroes of Star Wars through the eyes of others.  A bit of research tells me that it's actually the LAST original Star Wars item published by Dark Horse before they handed things over to Marvel.  Did they go out on a high note?  Let's find out! 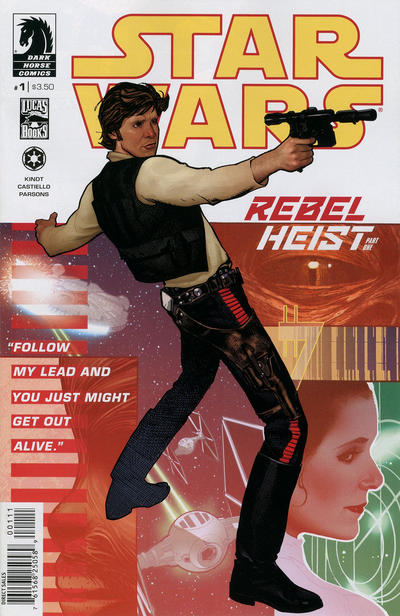 THE COVER:
Adam Hughes really knocked it out of the park on ALL the covers for this series!  This one showcases the reluctant rebel and smuggler, Han Solo.  Frozen in a moment of gun-slingin' action and with a vibrant background, this cover perfectly captures the roguish essence of the character.
THE STORY:
We begin the series on the planet Corellia, where a young rebel recruit named Jan is unexpectedly thrown into a chaotic adventure when he meets with his contact (none other than one of the most wanted men in the galaxy, Han Solo) and Imperial agents burst onto the scene .
Through a series of mishaps and narrow escapes, Jan becomes convinced that Solo is less of a hero and more of a lucky maniac with a death wish.  Eventually, the pair are captured and imprisoned on an orbiting Imperial space station.  But is there more to the story than Jan knows?
THE REVIEW:
This first issue shows us Han Solo through the eyes of someone not used to Solo's brand of improvisational adventure.  I found this issue to be pretty funny as the situation got more and more out of hand while Jan desperately wondered what sort insanity of what he'd been dragged into.  Of course, to Star Wars fans, we know that's just how Han Solo does it.  But to the narrator of the story, it was sheer lunacy.
Overall, a lot of adventure and a few chuckles make this a great start to the series.
NEXT! 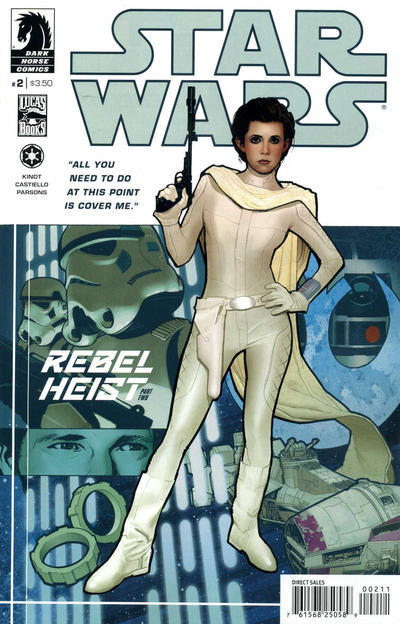 THE COVER:
It's Star Wars' rebel Princess showcased in a confident pose that lets you know she's not one to be messed with!  I really like how the stark white of her outfit contrasts with the cool blues of the background.  Another great Star Wars portrait from Adam Hughes.
THE STORY:
We shift scenes to the pleasure planet of Feddasyr, where neutrality in the galactic conflict and easy access to any sort of vice makes it a perfect world for the "cold war" of spies and intrigue between the Empire and Rebellion.  Our narrator is a very rare red Twi'Lek, whose one in a million color allows her to hide in plain sight as a highly-desirable dancer, able to infiltrate Imperial ranks as a Rebel agent.
When her cover is blown and she fails to deliver an Imperial code, her contact, none other than Princess Leia Organa, enlists her to assist with plan B. . .Leia infiltrating a high-class party thrown by a wealthy industrialist who has the code the Rebels need.
Although the Twi'Lek is unimpressed at first by Leia's royal background, she quickly comes to realize there's more to the princess than meets the eye as Leia accomplishes the mission and makes a narrow escape with a turncoat specialist "code carrier' stormtrooper who has the Imperial code imprinted in his DNA.
In the end, the Twi'Lek watches Leia allow herself to be captured in order for the code carrier to escape the planet and deliver the Imperial code to the Rebels.
THE REVIEW:
Where the first issue was about the madcap insanity that follows Han Solo wherever he goes, this issue tells a tale of Princess Leia as a highly-focused undercover operative.  Each move is meticulously planned, and even when things go wrong, Leia thinks of nothing but accomplishing the mission.  It's less humorous than the first issue, replacing the chuckles with tension and danger.
Overall, this is a great little espionage story set in the Star Wars universe.
NEXT! 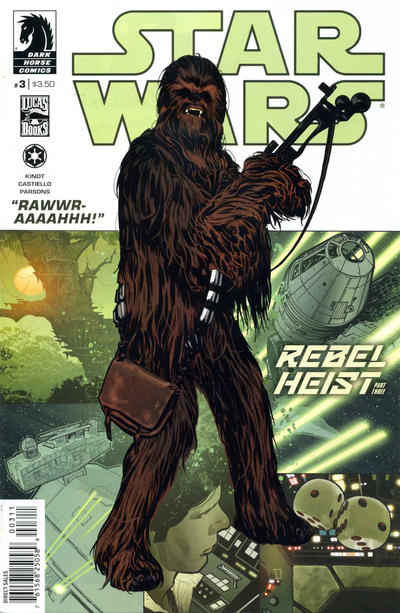 THE COVER:
CHEWIE!  Everyone's favorite Wookie stands ready for action in another great portrait by Adam Hughes.  Hughes really manages to capture the essence of these characters on these covers!  I love the detail on Chewbacca's fur, the fierce expression on his face, and the contrasting green background on this one.
THE STORY:
We continue the story from the viewpoint of the Imperial code-carrier Stormtrooper rescued from Feddasyr at the cost of the capture of Princess Leia last issue as he makes contact with the next Rebel agent, the Wookie warrior Chewbacca, on a backwater Imperial planet.
As an Imperial trooper, he looks down on Chewbacca as an uncivilized beast, but slowly changes his mind as Chewie helps him infiltrate the Imperial base where a "Galaxy Drive" needed to unlock the secret code in his DNA is located.
After a tense battle where Chewbacca saves the code carrier's life, they manage to transmit the code to the Rebels, but in the end they are captured and thrown into a Rancor pit, where they are left to die!
THE REVIEW:
Where the first issue was humorous and light, and the second issue dark and tense, this third issue is focused more on combat action and adventure as Chewbacca and the turncoat Imperial code carrier fight their way to the Galaxy Drive in order to release the Imperial code from his DNA.  I liked the whole "reluctant allies become comrades through battle" storyline running through this issue.
Overall, this issue doesn't stand alone as well as the first two (Ending on a cliffhanger setting up the final issue), but it's still a very nice combat-oriented story, packed with explosive action and gunplay.
AND FINALLY. . . THE COVER:
And we finish off this series of four fantastic portraits of the original Star Wars heroes with the young, but determined, Luke Skywalker.  I REALLY like the warm colors and the interesting background montage, making this one my favorite of the bunch.
THE STORY:
This story is told from the viewpoint of an Imperial spy tasked with following a suspected rebel on Corellia.  We see the events of the first issue from another viewpoint as Luke Skywalker helps Han Solo get captured.
We then follow the spy (and Luke) to Feddasyr, where he frees Princess Leia from captivity and the two head out to rescue Chewbacca.  The spy is confused as to why all the rescue missions when the rebel operatives have obviously been successful at their tasks.  He stows away on their ship to learn more.
Arriving at the Imperial base, Luke and Leia find that Chewbacca and the turncoat code-carrier have already defeated the rancor.  They help the pair escape the base and flee off-world to rendezvous with Han Solo, who has managed to escape and steal an Imperial freighter.  At this point, the spy reveals himself and surrenders, wanting to be part of something that values friendship just as much as success.
At the end, it's revealed that the whole plot was to find the freighter and its cargo. . .a shield generator that will be used to protect the rebel base on Hoth.
We then quickly revisit the various narrators of the issues for a glimpse of them in the near future. The rebel recruit from the first is now a recruiter himself.  The red Twi'Lek from the second continuing to spy for the rebellion.  The turncoat code-carrier of the third as the leader of a rebel combat squad.  And the Imperial spy of the fourth now a double agent and discovering the first hint of the second Death Star being constructed.
THE END
THE REVIEW:
A very nice ending to the story, wrapping things up with plenty of action and adventure, and giving the reader another viewpoint of the events taking place in the previous issues.  I liked how (just as in the original movies) Luke Skywalker is the glue that holds everything together.  This issue is very much focused on the bond of friendship that is between the main heroes of Star Wars and, as a huge fan of Star Wars, it had a pretty heartwarming feel to it.
Overall, a great ending to the story that hit this old Star Wars fan in a surprisingly heartfelt way.

I said in the introduction that this was Dark Horse's last original Star Wars project and wondered if they went out on a high note.  In my extremely humble opinion, I say YES!  This has everything a Star Wars fan could want in a story. . .action, adventure, humor, friendship, and more!
In these four issues you get a madcap chase story, a tense spy story, a rousing battle action story, AND a heartwarming story about the bonds of friendship. . .all tied together to make one big entertaining tale about a band of rebels stealing a shield generator.
There's no two ways about it, if you are a Star Wars fan, you'll like this story a lot, and I highly recommend you checking it out if you haven't already.
If you're not a Star Wars fan you might not get as much mileage out of Rebel Heist.  It's definitely written with existing fans in mind.  That said, give it a try. . .because it touches a few different genres and is told from several viewpoints, you might find it to be a pretty entertaining piece of science fiction action/adventure despite the Star Wars framework around it.
Up Next. . .
One of the more unusual comics in my collection. . .a strange little experiment by Dark Horse in their Star Wars line.  You'll see what I mean.  It's the Star Wars: Battle of The Bounty Hunters one shot!
Be there or be square!