So for the last few months I've been on a bit of a journey. . .a deep dive into the 60 issue Marc Spector: Moon Knight series.  In years past, I've come across about a dozen random issues of this series out Longbox Junkin' through the bargain bins, but recently I was able to fill the gaps and complete the run thanks to another comic shop going out of business and selling all their back issues for a single lousy buck.

Yeah. . .it was a serious case of Longbox Junk overload THAT day.  I spent about $800 on comics.  I think I MIGHT have a problem.  No, not that sort of problem. . .a storage problem!  BUT I DIGRESS!

I've spent the last few months reading and reviewing every single issue of Marc Spector: Moon Knight.  I'd go so far as to say that I have spent the most word space on the series than ANYBODY else except the creators themselves.  And in realizing that, I began to ponder. . .WHY is there so little information on Moon Knight's longest running series to date?  Why hasn't it been collected?  Why so few reviews?  What the heck is going on with this series that has caused it to become something that everyone KNOWS exists, but yet nobody wants to talk about it?

Wait.  I'm getting a bit ahead of myself.

If you want to read the reviews before coming back here for my final thoughts on this strange comic book journey, then click the links below. I'll wait.  It'll be a while, though.  It's okay.  Go ahead.

You're back. Sheesh. . . Now THAT'S a hefty stack of Longbox Junk, right?

So those are the individual reviews of each issue. . .once again, the most that ANYBODY has ever written about this oddly-ignored Moon Knight series.  Let's get into some final thoughts on the series as a whole, shall we? We shall! 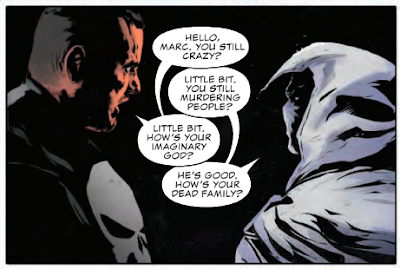 Taken as a whole, this Moon Knight series is extremely inconsistent and characterized by constant attempts to permanently change the character.  None of the individual issues or storylines ever manage to raise above the level of "Pretty Good", and the final five issues are some of the absolute worst comics I've forced myself to read front to back in quite a while.

I can recommend the first 24 issues (those written by Chuck Dixon) as simple superhero fun, but I wouldn't suggest punishing yourself with anything past that.
This series has never been collected, so if you REALLY want to experience the strange sensation of slowly realizing WHY this series has never been collected, you'll have to hunt down the individual issues. . .with some of the later (and ironically the worst) issues being a bit pricey.  Fortunately, most of them can be found in their rightful place in the bargain bin.
Up Next. . .
MORE Moon Knight!
Just kidding.  I'm ready to move along.  Maybe some one shots?
Sure, why not.  Tasty little bites of comic book fun that challenge creative teams to give readers a full story in one and only one issue. . .I love one shots!  Let's do some one shots!
Be there or be square.