Welcome back to Longbox Junk, the place where I write comic reviews that nobody ever asked for!

It's almost Halloween!  That special time of year when kids taking candy from strangers is actually encouraged!  Here at Longbox Junk, we've been handing out all sorts of Halloween treats. . .a lot of candy corn to be sure, but there's been a few full-sized Snickers bars in there too.
Unfortunately, the Longbox Junk Halloween Retro Review party is almost over.  Just this last one to go.  I think I did pretty good this year.  This post is #15. . .one more than my Halloween Horror comic spree last year, so there's that.
But enough of that!
On to the comic at hand.  We're heading back to the Bronze Age for a look at a comic absolutely STUFFED full of legendary comic talent.  Just LOOK at the credits below!  Bernie Wrightson, Stan Lee, Roy Thomas, Steve Ditko, Jack Kirby, and more. . .All in ONE comic!  How can this NOT be good?
Let's dig in! 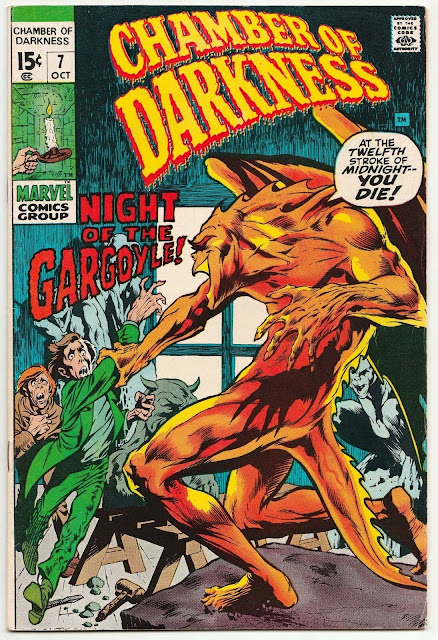 COVER: Bernie Wrightson
THE COVER:
Bernie Wrightson is rightfully regarded as a legendary comic talent, and a cover like this tells me why.  It's not the greatest cover I've seen from him (My personal favorite is Swamp Thing #9), but it's still a really good cover.  It has an awesome, dynamic style that gives the figures a sense of movement and life that is so recognizably Wrightson that you don't even need to see his signature on it.  A Bernie Wrightson cover is a great start to ANY comic!
THE STORIES:
Four stories in this one.  Two of them reprints from ten years earlier.  I look at the credits here and find it hard to believe all these great names are under the cover of a single random Bronze Age "horror" comic!  Let's check these stories out. . .
GARGOYLE EVERY NIGHT
SCRIPT: Roy Thomas & Bernie (Berni) Wrightson
PENCILS: Bernie (Berni) Wrightson
INKS: Bernie (Berni) Wrightson
After a series of grisly murders, an old craftsman known for sculpting gargoyles and other strange monstrosities comes under suspicion.  During a search of his workshop, the constable find nothing, but two townfolk discover a solid gold gargoyle hidden in a back room.
They return later, and over the desperate pleas of the old man they have subdued and tied up, the two of them dismember and melt down the golden gargoyle.  But when the clock strikes midnight, the old man transforms into a terrifying creature.  As it closes in on the two thieves, it tells them that the golden gargoyle was the only thing keeping him from killing more people! 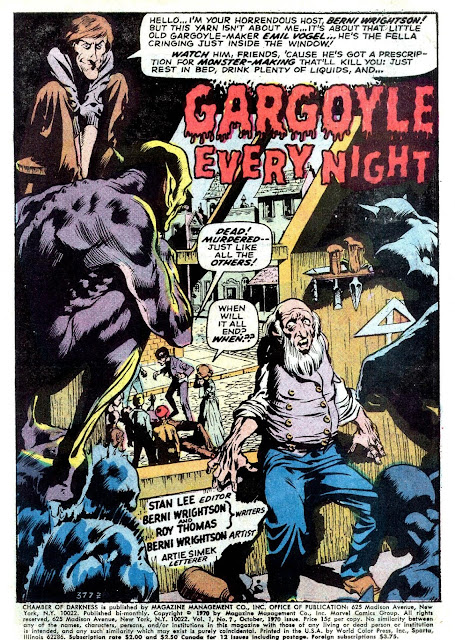 A great start!  It's a tale following the well worn path of "Greedy fools get what's coming to them", but the writing is engaging and lively.  What REALLY makes this story great is the fantastic artwork by Bernie Wrightson. . .who even puts himself in the story as narrator (see the splash page above).  There's a reason Wrightson is regarded as a legendary comic talent, and it's very plain to see why here.  The detailed, yet exaggerated and darkly inked figures with expressive faces almost seem to move across the page with a life of their own.  Every panel is worth lingering over for an extra moment or two.
BONUS:  A little research shows me that this is Bernie Wrightson's first work for Marvel!
We're off to a great start. . .NEXT!
I WORE. . .THE MASK OF DROTHOR!
(Reprinted from Tales to Astonish #11 - 1960)
SCRIPT: Stan Lee (?)
PENCILS: Steve Ditko
INKS: Steve Ditko
A renowned mask maker uses ancient books to mold his greatest creation, the Mask of Drothor, replicating the face of a legendary sorcerer despite warnings of a curse on any who try to do so.
Realizing that he has made a mask so lifelike that it actually resembles a human face down to its finest detail, the mask maker decides to use it to get rich by robbing wealthy clients.
During his first robbery, he trips an alarm and is forced to flee the police.  He returns to his shop and tries to remove the mask, but to his horror, he discovers that his own face beneath has taken on the appearance of Drothor.  Unable to disguise himself again, the police catch up and arrest him. 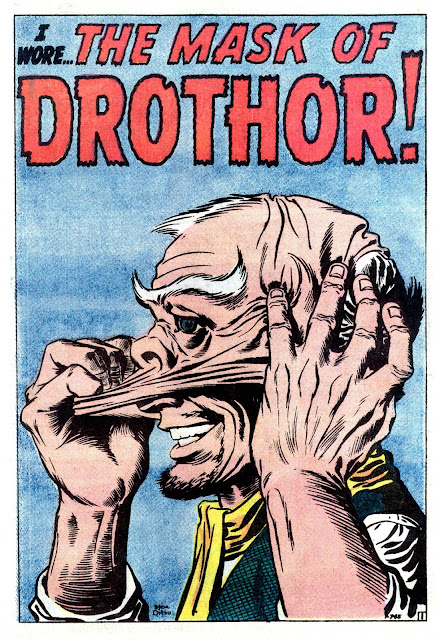 Okay. . .not a bad story.  It follows the paths of "Greedy fools get what's coming to them" AND "Fool ignores the ancient curse". But like the first offering in this issue, although the story is well done and engaging, the real appeal here for me was the fantastic art. . .this time courtesy of Steve Ditko.
Honestly, I've never really been a fan of Ditko, but delving into some of these older comics in my collection has slowly been changing my mind.  Where I find a lot of his art to be a bit basic (yes, I'm talking about Spider-Man, please don't hurt me), I've seen other examples of his art that show me exactly why Ditko is considered a comic legend.
This little story is a fine example of some great Ditko art that I've seen.  It's dark, fluid, exaggerated, yet lifelike.  There's a great sense of movement and action to the characters.  Ditko's art here elevates an otherwise pretty average story.
MOVING ALONG!

THE MASTERMIND
SCRIPT: Tom Sutton
PENCILS: Tom Sutton
INKS: Tom Sutton
A mad scientist brings to life his greatest achievement. . .a supremely intelligent creature, impervious to disease, injury, and age. . .presumably immortal.  As the scientist rages with glee that he finally has the means to conquer his enemies and all mankind, his creation turns on him.  If the creature is indeed superior, then he has no need for a master! 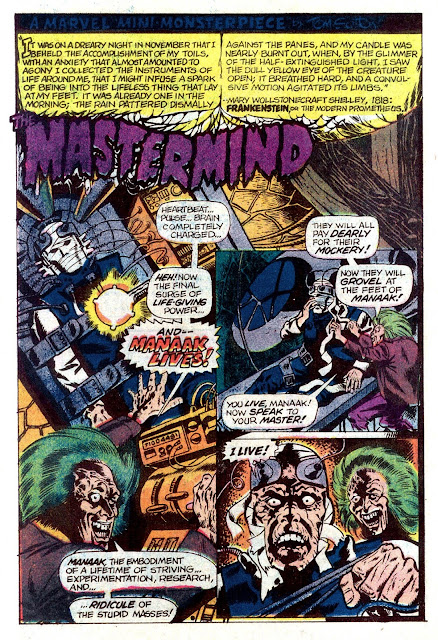 This great little twist on Frankenstein takes up only two pages, but Tom Sutton manages to give us a complete and compelling story in a very small space!  I've gone on a bit about the comic legends to be found in this issue like Bernie Wrightson and Steve Ditko, but in my extremely humble opinion, Sutton is a bit of an overlooked legend in his own right.
He's possibly not as well known as the others to the general comic audience because he worked less with superheroes (except the more supernatural ones like Vampirella,  Ghost Rider and Werewolf by Night).  But his art has a frantic, cartoony and vibrant style that brings dynamic life to his characters.  It's a style I really enjoy and this is a fine little example of it.
AND FINALLY. . .

I FOUND THE ABOMINABLE SNOWMAN!
(Reprinted from Tales to Astonish #13 - 1960)
SCRIPT: Stan Lee (?) & Larry Lieber (?)
PENCILS: Jack Kirby
INKS: Steve Ditko
A criminal called "Big Carl" Hanson steals what is supposedly a genuine photo of the Abominable Snowman.  Deciding that he can make more money off of actually capturing the creature than just off the photo, Hanson heads to the Himalayan mountains.
As he begins his search for the creature, Hanson is repeatedly warned that the picture is cursed, but he ignores the warnings as superstition.  Eventually, nobody will come near him and he has to continue his search alone.
As he heads higher and higher into to mountains and his supplies run out, Hanson slowly turns more and more savage until he is little more than a wandering beast himself.  He has become the Abominable Snowman. 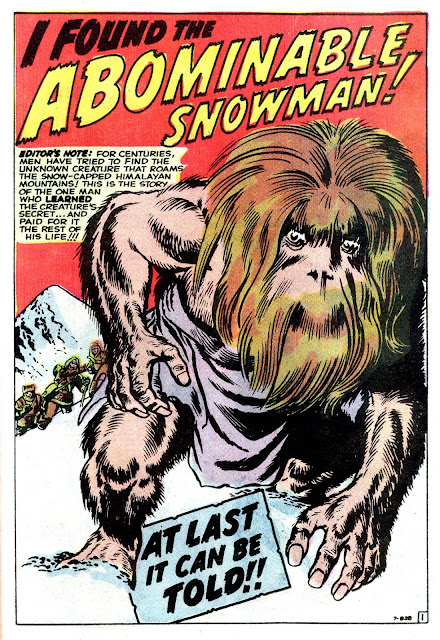 Yet ANOTHER story following the "Greedy fools get what's coming to them", but with some "Don't ignore the natives" thrown in. . .officially making this entire comic about the follies of greed, with four out of four stories following the same lines.
That aside, this is actually another well written and engaging story that I really enjoyed.  But like the other stories in this issue, what makes this little tale sparkle is the fantastic artwork. . .this time courtesy of comic legends Jack Kirby and Steve Ditko.
I think this might possibly be the first time I've ever seen non-superhero work from Jack Kirby, and I have to say that I liked it a lot!  Maybe it's Ditko's inks here, but this little random story really grabbed me, where a lot of his superhero work doesn't (I know. . .I know! Please don't hurt me!)
I wouldn't mind seeing more of Kirby's non-superhero work, based only on the strength of what I'm seeing here.  Overall, this was a great finish to this comic!

Just looking at the credits on this one, I KNEW it was going to be good, which is why I saved it for last.  My prediction turned out to be true.  Story for story, page for page, and panel for panel, this comic was probably my favorite of the entire Halloweeen Retro Review bunch!
There is so much great talent on display here, that I am happy that this comic even exists.  The stories are all very nicely done and engaging, but what really shines here is all the great art to be found!  Every page in this comic is a feast for the eyes.
If you're looking for a single comic absolutely PACKED with legendary comic talent, then this is what you're looking for.  The actual issue in good shape is a bit pricey, but I found mine in decent condition in a back issue bin for ten bucks, so they're out there.  If not, then it's been reprinted in a couple of different collections as well.
WELL. . .
That's it for the Longbox Junk Halloween Retro Review Party for this year.  I hope you had as much fun as I did checking out a some of the older and/or more "valuable" comics with a supernatural twist in my collection!
So what's next, you ask?
With all due respect to the fine and friendly folk of Old Guys Who Like Old Comics, I think I've spent enough time on the other side of 1986 for now. It's time to get back into the dollar boxes and some actual Longbox Junk!
Something I haven't done in a while that is one of the unique things I do here at Longbox Junk is reviewing an entire series from first issue to last.  I think that's what I'll do next.  But which one?
So many to choose from! Suggestions are welcome.
In any case, I'll figure it out.
Be there or be square!