Welcome back to Longbox Junk, where I write comic reviews even though nobody asked me to!
It's October!  I love this time of year, even though in all the hustle-bustle of Christmas shopping, Christmas music, and holiday crowds it's hard sometimes to remember to keep the peaceful spirit of the season in mind.
But THAT'S Wal-Mart.
Here at Longbox Junk, we celebrate Halloween in October. . .I know, crazy, right?
This year for the Longbox Junk Halloween review party, I've been taking a look at some of the older and/or more "valuable" comics with a supernatural twist lurking in my collection.  It's been fun so far, so let's keep the party going!
It's just NOT Halloween without a werewolf howling at the moon!  So let's take a look at a comic featuring Marvel's own Bronze Age Lycanthropic anti-hero, Jack Russell, AKA. . .WEREWOLF BY NIGHT!
AAAAAAAAH-WOOOOOOOOOOOOOOOOO!! 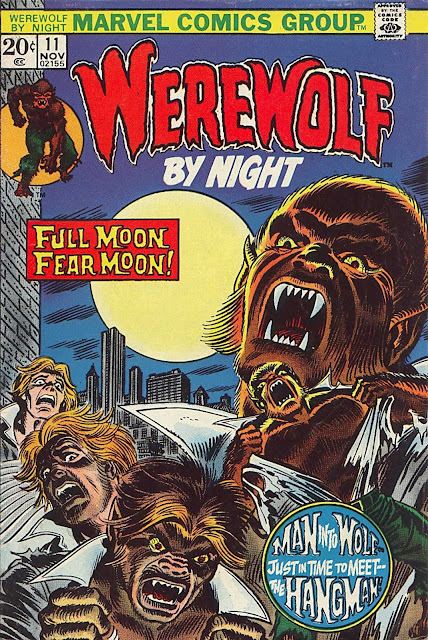 COMES THE HANGMAN
SCRIPT: Marv Wolfman
PENCILS: Gil Kane
INKS: Tom Sutton
COVER: Gil Kane & John Romita
THE COVER:
I absolutely love this cover!  The transformation from man to monster reminds me of some of my favorite Incredible Hulk covers.  John Romita's inks bring out the best in Gil Kane's pencils.  I'm not usually a big fan of Kane's art, but this is probably one of my favorite things by him I've seen.  It's just a great Halloween horror cover!  Let's get inside. . .
THE STORY:
We begin our tale at an unknown location and in a laboratory of the mysterious organization known as "The Committee".  They have captured Jack Russell's father, Phillip Russell and are torturing him in order to discover the location of Jack.  Phillip refuses and the torture continues. 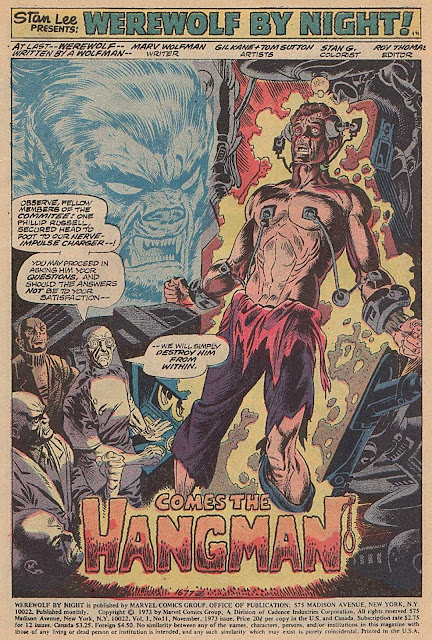 IN THE MEANTIME. . .
In Venice Beach, Jack decides it's time to move out of his friend Buck Cowan's bungalow before his personal (and werewolf) problems become everyone else's problems too.
He moves into an apartment complex called Colden House.  There he (and the reader) are introduced to several female neighbors, as well as the mysterious Mr. Coker, who likes reading books about the occult and werewolves (Dun-Dun-DUN!) 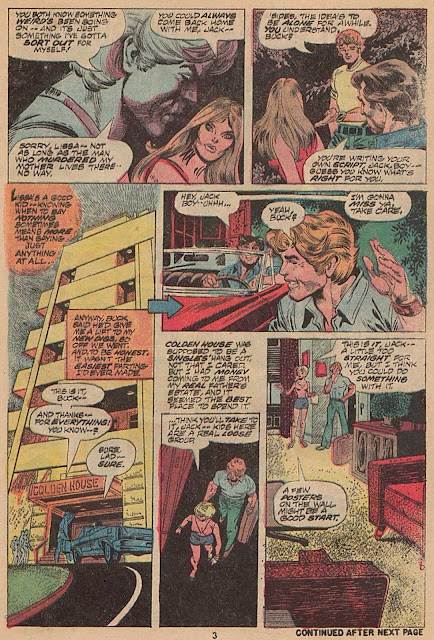 ELSEWHERE. . .
A masked character calling himself "The Hangman" saves the life of a young woman after she is attacked by a drug addict.  After killing the attacker, he brings the terrified woman back to his secret lair, where he claims to be protecting her from "evil" by keeping her (and several other women) in cages. 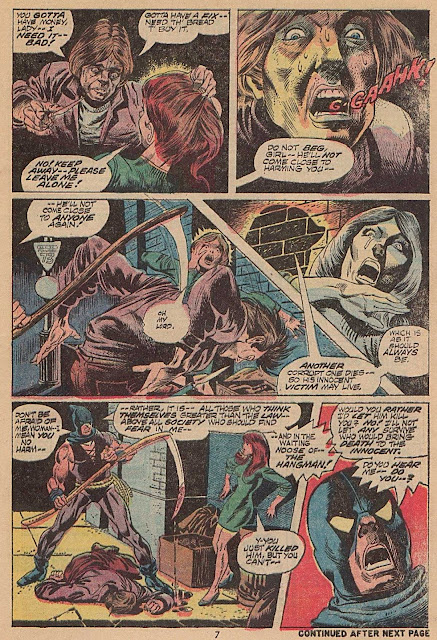 WHILE THAT'S GOING ON. . .
Jack manages to elude his new neighbors, who want to party with him, and make his way to the beach, where the full moon transforms him into The Werewolf!  He stumbles onto a group of young men partying on the beach.  Jack wants to avoid conflict, but they attack!
The Werewolf easily takes down the attackers, even though they outnumber him 5 to 1.  Inside the wolf, Jack keeps himself from killing any of them.  The police show up and The Werewolf flees the scene. 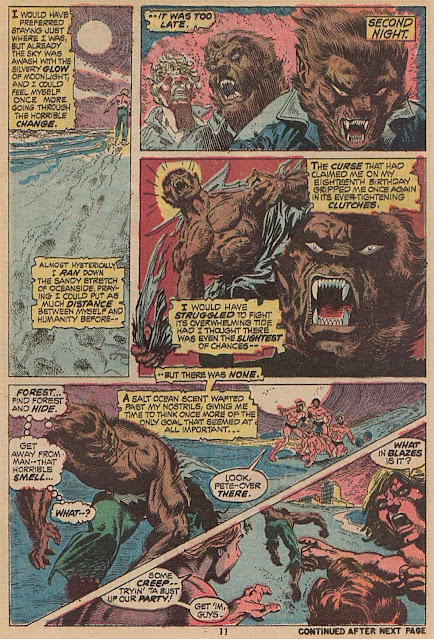 MEANWHILE. . .
In the Hangman's secret lair, the vigilante removes his mask and reveals his whole origin story to his newest terrified captive.  He was a young man who believed in good vs. evil, but when he went overboard killing Ratzi's during WWII, he was court-martialled and sentenced to prison for six years.
After being released, he couldn't find a job because of his criminal record and came to the conclusion that "The System" and all those within it were corrupt, and so he decided to fight back by becoming the costumed crime fighter known as The Hangman! 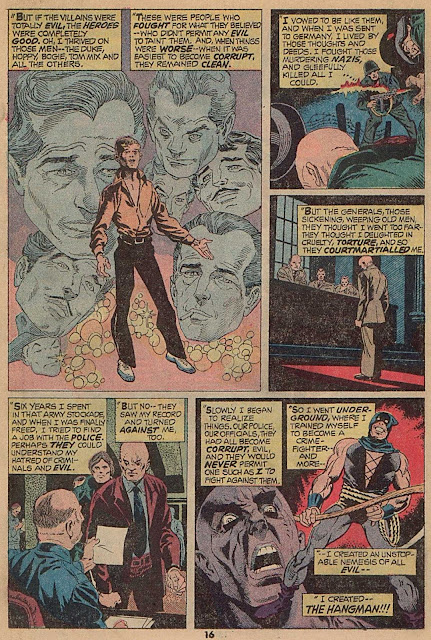 LATER ON. . .
As The Werewolf continues to elude the police after the attack at the beach, he runs into his sister, Lissa, and his friend, Buck.  As he approaches, The Hangman (who was patrolling the area looking for evildoers to take down) mistakenly thinks he is going to attack them and jumps down to their defense!  Lissa knows that Jack is the Werewolf, and she tries to stop the fight from  happening, but nobody listens and the Werewolf and Hangman go to it! 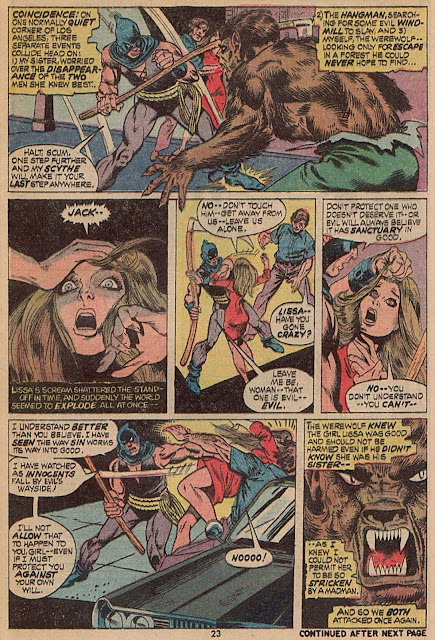 A brutal battle ensues between The Werewolf and The Hangman, with both of them taking a beating, but still coming back for more!  The police arrive on the scene and Jack convinces the Werewolf to retreat. 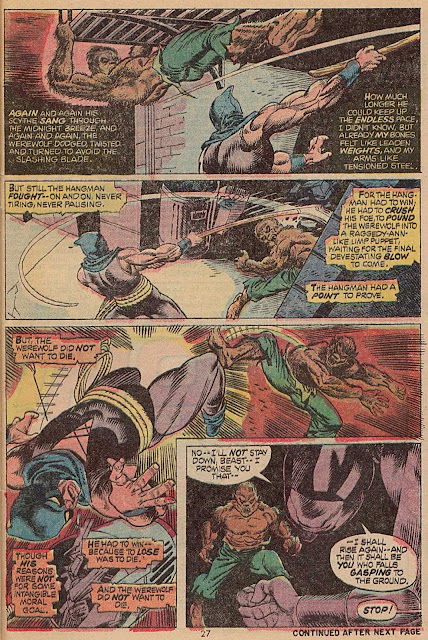 BUT. . .
As the Werewolf flees through the city to avoid the police, The Hangman follows and manages to capture him with a rope, hanging him from a streetlight! 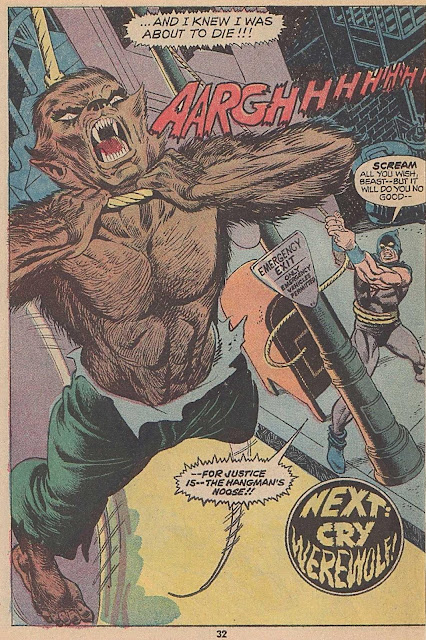 To be continued. . .
THE REVIEW:
Obviously, this comic is right smack in the middle of an ongoing story, but even so, it was a pretty good read.  The Hangman seems to be a bit ridiculous in execution, but his origin (man whose illusion of good vs evil is shattered by the reality of war) is actually interesting as an idea.
Despite the somewhat weak villain, I really liked the rest of the story.  Like the cover, the storyline reminds me of something that might be found in Incredible Hulk in that the Werewolf just wants to be left alone, but everyone keeps attacking him and he's forced to fight back. . .which just makes people want to keep attacking him!  Marv Wolfman does a great job making the reader feel the frustration of Jack/ The Werewolf, and that's the best part of the story.
On the art side of things. . .
I have a confession to make.  I'm not a fan of Gil Kane's art.
Look, I KNOW that he's a legendary comic talent that stands SO high on his pedestal of admiration in the eyes of some comic fans that my humble opinion doesn't really matter. . .and I'm not here to try and knock anyone off their pedestal, but I've always found his art to be a bit. . .basic.
THAT SAID. . .
I'm more familiar with Kane's work from Silver Age issues of Green Lantern.  The difference between his work there and here is like night and day!  Looking at the cover and the interior art here, and then comparing them to his Silver Age work, I think I can safely say that with a good inker, Gil Kane's art is actually pretty impressive!
Please don't hurt me.  It's only my humble opinion, and I really don't have much of Kane's work to base it on!  Suggestions of issues or series to MAKE me a fan of Gil Kane are welcome.
Whether it's Gil Kane or Tom Sutton making it look good, this is one good looking comic!  The Werewolf is snarling and , a truly nasty looking creature of the night unlike some of the later issues of this series.  The opening splash page of Phillip Russel being tortured is just awesome in its creepy detail, and really one of the best splash pages I've seen in a while!

Even though The Hangman is a somewhat weak villain, this story is well written and engaging.  It ends on a cliffhanger that makes me want to see what happens next, so it hits a good mark in managing to draw me in even though it's part of a continuing storyline that I don't know what came before.
The art is dark, it's brutal, it's nasty.  For an artist I don't normally like, Gil Kane delivers on the promise of the awesome cover by throwing down some great horror visuals that I wasn't expecting in a mainstream Marvel comic.
Overall, this isn't the best comic I've ever read, but I really liked it.  If you're looking for some good Bronze Age Mighty Marvel Monster fun, then I can certainly recommend this issue!
Up Next. . .
We've been on the Marvel side of the Bronze Age for two posts now.
Let's head over and see what DC was up to with 1975's  Secrets of Haunted House #3.
Be there or be square!