Welcome back to Longbox Junk, the place to find all the comic reviews you never asked for!
You gotta love this time of year.  Pumpkin spice Pringles.  Miserable dogs forced to wear little costumes.  Candy Corn.  What the heck IS Candy Corn anyway? Never mind. . .I don't want to know.
In the meantime, in the dank basement of Longbox Junk headquarters, there's a machine that smells like musty paper.  It's the Longbox Junk time machine, and I've got the dial set to 1974.
*Puts on ridiculous steampunk goggles*
Please place all personal belongings under your seat and dispose of all candy corn!
*Pulls gigantic lever*
HERE WE GOOOOOOOOOOOOOOO!! 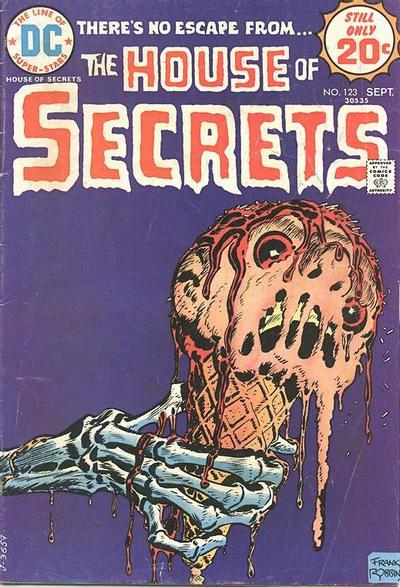 COVER: Frank Robbins
THE COVER:
Wait.  How the &$#@ did THIS get approved by the CCA?  Frank Robbins throws down a disturbing, disgusting vision of horror that raises a gory middle finger to the very IDEA of the CCA.
I love this cover.  It's one of my Halloween favorites and has taken a few turns up on the Halloween version of the "Wall O' Covers" at my office, and it's also usually the one that gets enough comments that I debate the wisdom of having it up there in the first place.  THIS is what a Halloween horror cover should be!
THE STORIES:
Just two stories under that awesome cover.  Let's hope they're good ones!
A FUGITIVE APPARITION
SCRIPT: John Albano
PENCILS: Leandro Sesarego
When a young boy accidentally discovers a strange spirit, they slowly become friends.  The spirit reveals that he's in hiding after escaping punishment for a crime he didn't commit.  When a ghostly bounty hunter discovers the spirit's hiding place, he manages to escape by using a trick he learned from his young human friend. 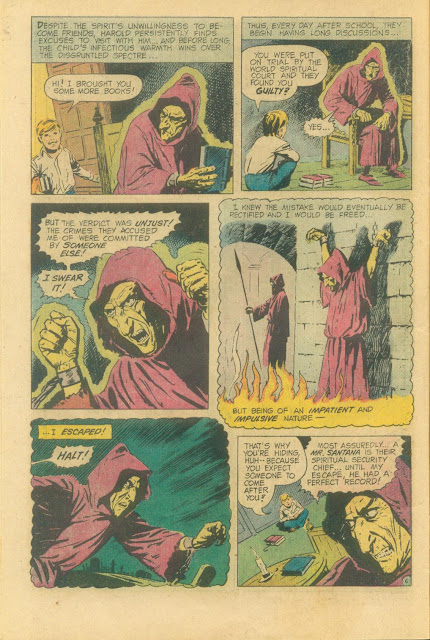 Hmmmmm. . .okay.  It's a sort of "unlikely friends take on the world" story with the most interesting parts being the growing friendship between a boy and a hideous spirit in hiding.  I liked it because (unlike a lot of these stories I'm finding in these anthologies) at least it's pretty original.  On the other hand, the art isn't doing anything it absolutely doesn't have to do beyond telling the story.
Overall, a pretty good read.  It seems like the sort of thing Disney would make into a kid-friendly Halloween movie. Not the greatest story ever, but it's sort of unusual, and that's a good thing.
NEXT!
A CONNECTICUT ICE CREAM MAN
IN KING ARTHUR'S COURT
SCRIPT: Michael Fleisher & Russell Carley
PENCILS: Alex Toth
After Ice Cream man Ernie Baxter is somehow transported to King Arthur's domain, he avoids execution through the power of delicious ice cream, and is celebrated as a great wizard.
Not long after, Ernie decides that even though he is given almost anything he wants, he wants more, and so plots to kill the King and take over Camelot.  Unfortunately for Ernie, he was being closely watched by rival "wizard" Merlin.
Merlin warns the King of Ernie's plot and uses his own magic to turn Ernie into ice cream, which is then served at the King's banquet. . . 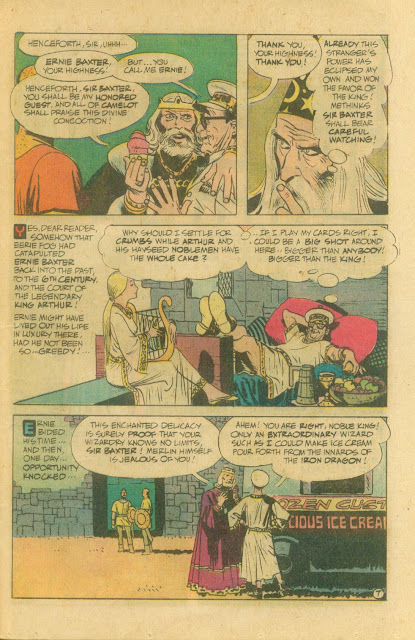 Okay then.  Hmmmmm. . .
It's basically a good old "Fish Out of Water" story combined with the equally well-worn "Greedy person gets what is coming to them" story path.  It's sort of an unusual mashup, but it actually works pretty well.
Like the first story in this issue, this one isn't the greatest comic story I've ever read, and it's certainly not scary in any way, but it IS fun, engaging, and well-written.
That said, for me the best part of this story was the great artwork by the legendary Alex Toth.  Toth brings his signature style to this strange little tale and makes every page worth an extra moment of lingering over.

What we have here are two stories that I would describe as "Pretty Good".  One that gives the "unlikely friends take on the world" a supernatural twist that makes it read like a Disney Halloween special.  And a second story that mashes the "fish out of water" and "greedy person gets what is coming to them" tropes together for a comic book repaint of "A Connecticut Yankee in King Arthur's Court".
Both of them are well-written and engaging.  With the exception of Alex Toth's typically amazing artwork in the second story, neither of them are great or particularly memorable.  They're just "Pretty Good" and not much more than that.
Overall, I'd recommend this comic to anyone looking for a couple of fun stories with some supernatural flavor.  This comic doesn't seem to be very "valuable" at all to collectors, so copies should be out there at decent prices.  I got mine out of a bargain bin for a buck.  I'm sure there's plenty more out there.
Up Next. . .
It's back to the Golden Age for another Longbox Junk Halloween Retro Review!
Join me as I take a look at Witchcraft #2 from 1952. . .because what's Halloween without some witchcraft?  I say it's not Halloween at all!
Be there or be square!