Welcome back to Longbox Junk, where I write comic reviews even though you never asked me to!

It's that time of year again!  That's right, 'tis the season to go to Wal-Mart and buy Halloween candy while listening to Christmas music on the overhead speakers as you shop! FA-LA-LA-LA-LA!!
Here at Longbox Junk, we're not mixing the seasons up. . .it's all Halloween all October just like it SHOULD be.  But just to throw a little extra pumpkin spice in the mix, I've decided to shine the spotlight on some of the older comics featuring spooky stuff in my collection for a month full of Longbox Junk Halloween RETRO Reviews!
Enough introduction!  Let's crank up the paper time machine for a fairly short jump back to the waning years of the Bronze Age for some 80's style supernatural fun.  Ready? Let's do it! 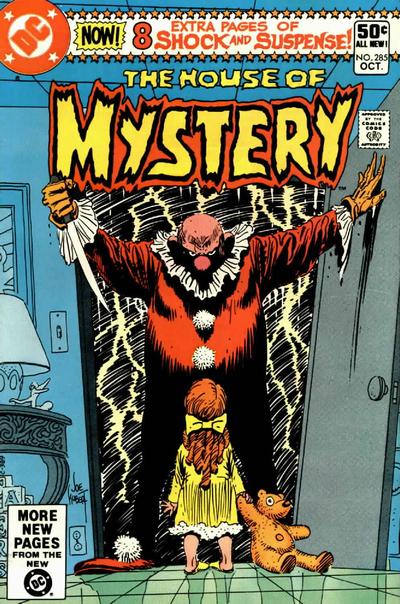 COVER: Joe Kubert
THE COVER:
The legendary Joe Kubert throws down a nightmarish vision in ink that punches you right in the face! This may not be on any "Top Ten" lists that I've ever seen, but in MY book it's one of my favorite Halloween comic covers.  Finding this kind of thing is why I love digging deep into those back issue bins.  Let's get inside!
THE STORIES:
A pretty good handful of spooky tales to be found here.  Four full stories.
Let's give them each a turn, shall we?  We shall!
COLD STORAGE
SCRIPT: Paul Kupperberg
PENCILS: E.R. Cruz
A soldier from Mississippi stationed at a two man radar station in the Arctic slowly goes insane from the isolation and extreme cold.  One day he snaps, killing his commanding officer and hijacking a supply plane. . .willing to do anything to be warm again.
During a fight in the plane, the pilot is killed and the plane crashes in the Arctic wilderness.  The soldier wanders until he finds a cabin, but the man inside warns him to go away before it's too late.  The soldier ignores him and lights a fire.  To his horror, the strange man begins to melt!
On the radio, the terrified soldier hears his base warning him that the stranger is an astronaut who has contracted a highly-contagious alien disease that forces the infected to stay at sub-zero temperature.  He'll never be warm again. 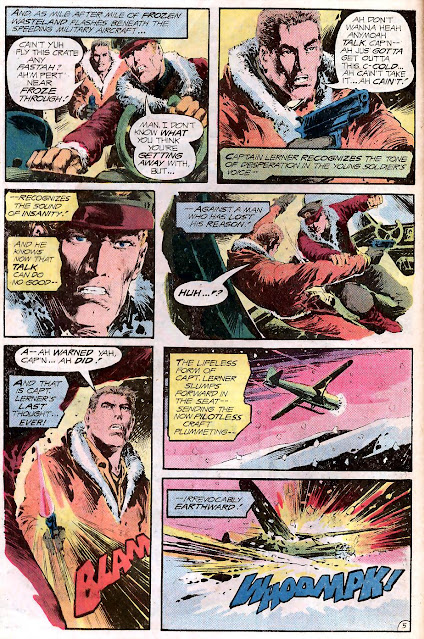 Ah, yes. . .It's the good old tried and true "forced to endure that which you hate/fear the most" story twist.  But even though the story follows a well-worn path, it's written well enough to keep me reading, and it's backed up by some really good art that elevates the whole thing several notches.  Overall, not a bad start at all.  Actually, it's a very good start.
Let's see what's next!
MAN WITHOUT FEAR
SCRIPT: Mike W. Barr
PENCILS: Ernie Patricio
After a vampire hunter with a reputation for knowing no fear accidentally kills a Gypsy woman's son, he is cursed by her with a fear of sharp objects, rendering him helpless when he encounters the actual vampire he was hunting. 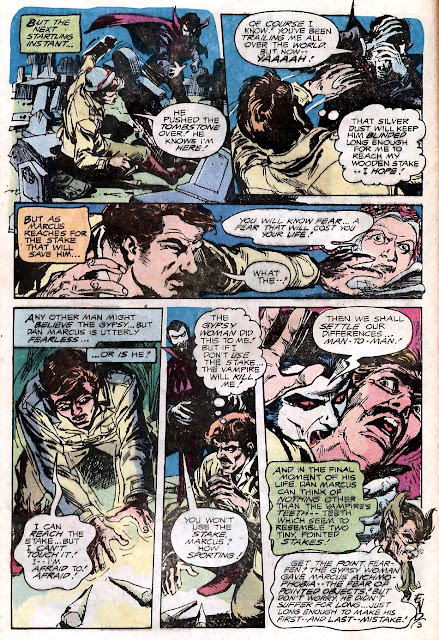 Ah, yes. . .it's the good old tried and true "Unfortunate Gypsy Curse" story twist.  Making this the second story to follow an extremely well-worn path.  Unfortunately, it doesn't manage to pull it off quite as well as the first.  The ending here is a bit of an eye-roller.  The art here is pretty good, but some sloppy inking makes it a bit muddled, taking things down a notch.  Overall, this one isn't BAD, it just could have been better.
NEXT!
KILL, CLOWN, KILL!
SCRIPT: Carl Wessler
PENCILS: Tenny Henson
A small town sheriff is called to a travelling circus after the owner is brutally murdered.  Evidence points to one of the clowns, but he feels that there's more to the case than meets the eye.
He quickly discovers a sordid underbelly to the circus and reveals the suspect clown as being the owner's wife who disappeared five years before.  But before the arrest can be made, all the performers confess to the murder.
The coroner informs the sheriff that there was so much damage to the victim's body that it's impossible to tell exactly WHO killed him.  The sheriff has no choice but to leave the case unsolved. 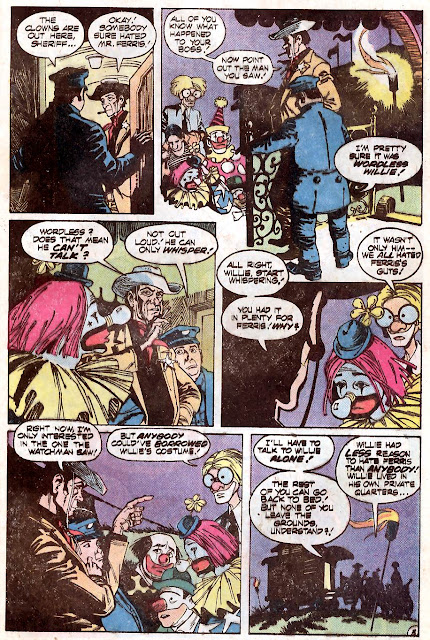 This one lives up to the title of the comic in that it presents a mystery story without any supernatural or fantastic elements at all.  It's interesting and well-written. . .not a bad little story.  Not a great fit for a Halloween entry, though.  Still, it's pretty good for what it is and it's backed up with some very nice art. . .slightly cartoony, but detailed.  Overall, I'd say that this is probably the best story here.
AND FINALLY. . .
SOUND AND FURY
SCRIPT: Mike W. Barr
PENCILS: John Garcia
After a shopkeeper complains about a hood lingering outside his store and playing loud music, the young man robs the shop and shoots the shopkeeper's wife when she recognizes him.
As the shopkeeper's wife recovers, she struggles to regain her memory about the robbery until she hears loud music outside their apartment and remembers who shot her.  As the shopkeeper pursues the hood, the young man is trapped in a collapsing basement.
Ignoring the robber's pleas for mercy, the shopkeeper turns up his music to full volume, leaving the hood to die without anyone to hear his yells over the loud music. 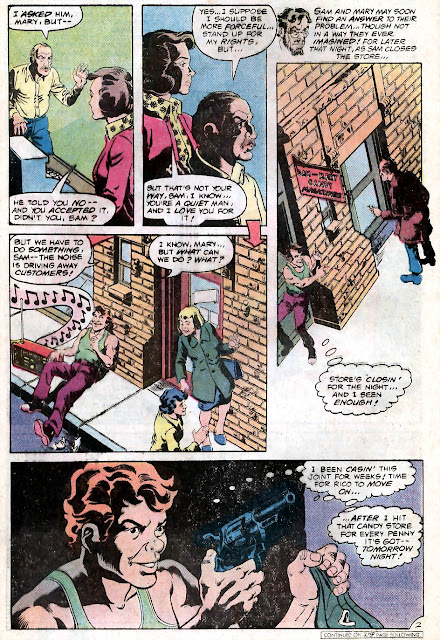 Ah, yes. . .it's the good old tried but true "You reap what you sow" story twist.  Making this the third out of four stories in this comic to follow a very well worn story path.  I guess it's the law of diminishing returns at work here, but this last story is the worst in the book.  I guess Mike W. Barr was having an off week or something because normally he gives better than either of his offerings in here.
To make matters worse, the artwork on this one is pretty basic, to say the least.  It tells the story, but doesn't make any effort to do anything it absolutely doesn't need to do.  Well, once again I guess I have to say they all can't be winners, and leave it at that.

Not bad!  Despite the last story being a bit of a clunker, there's some pretty good meat on this comic bone.  Almost all the stories follow extremely well worn paths, but overall I really enjoyed reading this comic.  It's not the best comic I've ever read, but it's surprisingly entertaining at the end of the day.
I'm pretty sure this comic isn't on any sort of collector's radar, and I'm also pretty certain that this is the only review that anybody has ever bothered to write about it, and probably will remain the only one in existence.  Even so, if you're looking for a decent little set of Twilight Zone "twist" style stories under a fantastic Joe Kubert cover, keep your eye out for this one in the bargain bin.
Up Next. . .
What's a Halloween party without Count Dracula?
In MY humble opinion, It ain't a party at all!
Jump into the Longbox Junk paper time machine with me as I head back to the Silver Age for a look at Dell's 1962 Dracula one-shot.  We MIGHT even answer the question of whatever happened to the Transylvanian Twist!
Be there or be square!